The world of books may not seem like the most immediately obvious source of humor, but Tom Gauld’s Baking With Kafka could change that. The recently released hardcover collects some of the British cartoonist’s work for the U.K. newspaper The Guardian and finds new things to say about the literary world, pop culture and the way people interact with stories in general.

Ahead of Gauld‘s West Coast tour, Heat Vision spoke with him about the origins of the strips and whether or not he’s feeling optimistic about what the people seem to want. In early November, he will be visiting Austin, Texas; Los Angeles, San Francisco and Berkeley, California; Seattle; and Portland, Oregon. (More details can be found here.)

Baking With Kafka is a collection of cartoons about books, which doesn’t feel like the crossover genre with the largest audience in the world. How did you end up in such a niche area?

These cartoons tend to be about literature because they have their first outing in The Guardian newspaper’s weekly books section. I took the job 12 years ago because I was happy to have any kind of paid cartooning work, but I also felt I’d be able to do it because I like to read. Over the years, I’ve gotten to know the world of books better and enjoy the challenge of finding new ways to make fun of it. Not everybody is interested in cartoons about literature, but I’ve found that the people who are interested really appreciate somebody making cartoons which lovingly mock that world.

I don’t want the cartoons to be exclusive, so I try to, for example, make cartoons that play off a general idea of what a Jane Austen novel is, rather than the specific details of her novels. Though if I can come up with a little extra something for the real fan of a book, then it’s fun to slip that in there somewhere, too. 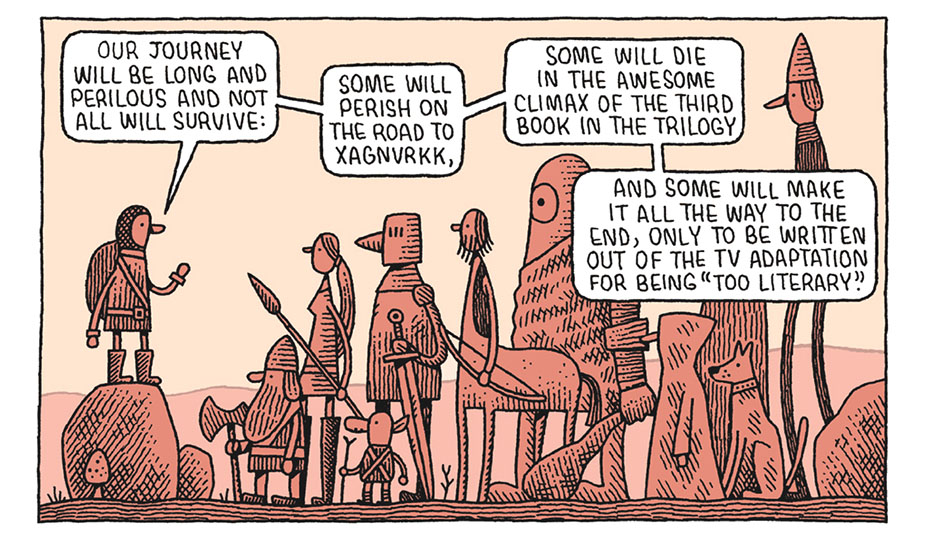 Your cartoons seem to me a mix of cynicism — especially in regards to what the audience wants and market trends in general — and a refreshing optimism and belief in the work, perhaps, or the idea of stories and storytelling, maybe. Is there a point of view that you’re trying to get across in these cartoons about the way people respond to stories, and the kinds of stories that they want?

I almost always make these cartoons in a bit of a hurry, generally in a blank panic wondering how I’ve managed to do five hundred of these cartoons without it getting any easier, so I’m focused on the mechanics of making a joke that works on the page, rather than trying to express how I feel. But I think that the way I feel gets in there anyway and, when I look back on the cartoons, either once they appear in the newspaper or when they are collected in a book, I can see themes and ideas more clearly than when I’m actually making them. Which is a roundabout way of saying that I am probably cynical about the forces of the market and optimistic about the possibilities of the art.

I do try not to let the cartoons get too negative. I think comedy comes more easily from failure than success, but too much cynicism gets me down. I am quite pleased when I think of a very silly way of making a joke about something serious. 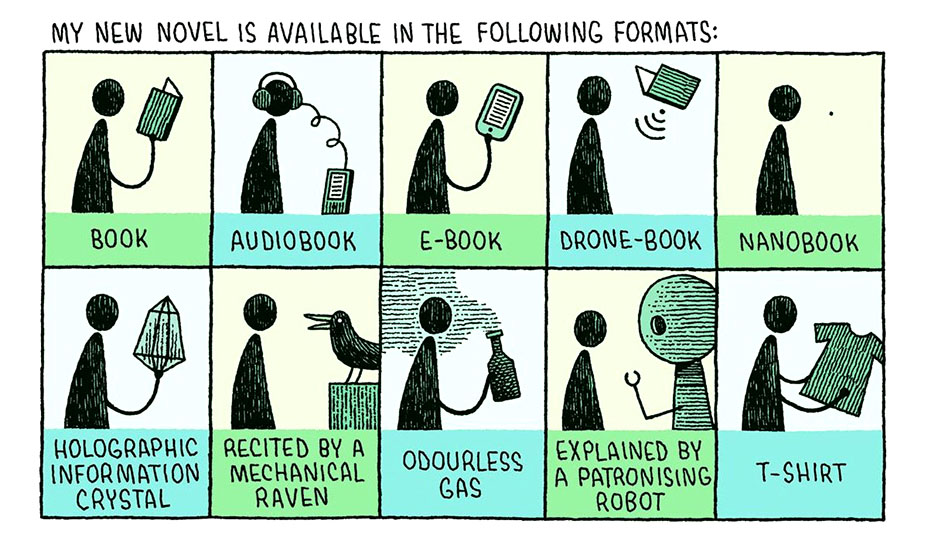 Your work has an understated nature to it. It feels particularly refreshing when it comes to this kind of short strip cartooning, which can tend towards the obvious, or at least the loud. Is it a conscious choice to work against expectations with the format, or is this simply your approach to comedy in general?

I’ve always liked understated art. One of the things I like about comics is that you can put together a few words and images and they will come together to make a third, bigger thing in the reader’s mind. When I work, I’m always editing and erasing and trying to figure out what is the simplest way to depict or express something.

I wouldn’t say that this minimalism is a conscious choice, it’s just the way that feels right. It’s partly because the cartoons are quite small, so if I want them to read clearly — which I think is important for comedy — they need to be quite simple.

I like deadpan comedy and am less interested in cartoons, or any comedy, which tries too hard to say, “This is funny! Get ready to laugh!” I hope that by being a bit more restrained visually, the comedy might be more unexpected.

You work in shortform with cartoons like those in Baking With Kafka, and also longform with projects like last year’s Mooncop. What do each offer to you as a cartoonist? Do they balance each other out?

I think they do balance each other out in some ways. I like the routine of making weekly cartoons; I also make a weekly cartoon about science for New Scientist magazine, and the fact that even in a week where one of my longer works is stuck in the mud — unfortunately quite a regular occurrence — I have achieved something.

Recently, I thought of a slightly ridiculous analogy for the two types of work. The short cartoons feel like a weekly escapology act where I gather some people on the quay and escape from a locked box which has been thrown into the river. It’s tricky, but I basically know what I’m doing and I get a nice round of applause when it works. In contrast, writing a graphic novel feels like escaping from a prison. It takes a lot more time, hard work and planning and the stakes feel higher, but if you pull it off, it all feels worthwhile.