Your Studio Productions, a casting workshop company that the Los Angeles City Attorney charged on Thursday with violating the Krekorian Talent Scam Prevention Act, has shut down all operations, at least for now. In an email sent to its clients, the company wrote, “It is with regret to inform you [sic] that Your Studio Productions has temporarily suspended its operations.”

Of the five workshop firms that face arraignment in March, it had the most casting directors, associates and assistants implicated as defendants. They were Darya Balyura, Amy Cohen, Kimberly Ehrlich, Rachel Rose Oginsky, Stephanie Weatherbee and Peter Pappas — each of whom was charged with a single misdeamenor for violating California labor code. Their credits range from Switched at Birth and Tyler Perry’s Love Thy Neighbor to Suits and The Big Bang Theory. (A full accounting can be found here.) 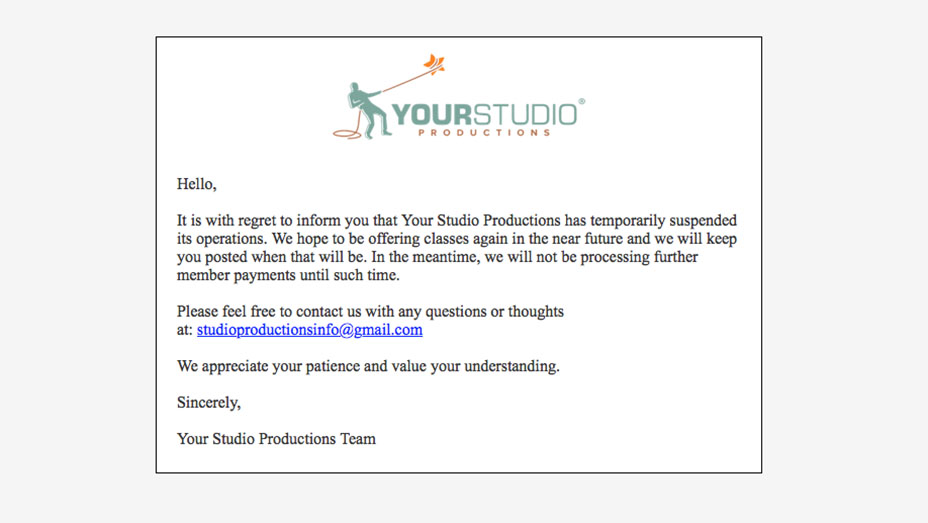 Your Studio Productions owner Garret Camilleri will also be arraigned for multiple counts. His firm’s email explained that “we hope to be offering classes again in the near future and we will keep you posted when that will be.”

City Attorney Mike Feuer announced the sweeping, unprecedented enforcement of the Krekorian Act in a news conference on Thursday morning. “I want to underscore what the rules are,” he said. “It’s unlawful to charge any performer for an audition, even if that supposed activity is disguised as a workshop.”

The legal action arrived 10 months after The Hollywood Reporter first brought renewed attention to the common yet long overlooked issue of pay-to-play auditions.