We first saw Carrie Fisher in the flesh at the Attitude Awards in London in October 2014. She was presenting an award to Graham Norton, and she made a speech that was so rude and irreverent and funny that she managed to at once charm and insult everyone present.

Rob Delaney and I were at that point writing our first season of Catastrophe. We’d written the part of Rob’s dreadful mother and my character’s mother-in-law, Mia, and were mid-brainstorm for who could play her. We watched Carrie onstage, and I turned to Rob and said, “That’s Mia. That’s your mother.”

We spent the next few days trying to find an “in” because we assumed the traditional route of approaching her agent would lead nowhere. So Rob tweeted her, I tweeted her, we tried the old “friend of a friend” route, but no joy. Finally, we sent the pilot episode that we’d already filmed and a few scripts to her agents and expected nothing. Then we got the yes. We didn’t fully believe she was actually going to do it until we were booking her and her dog Gary’s plane ticket.

For three seasons she would bolt into our lives for a short period and then fly out of them again. Full of stories and gossip and mischief. She’d perform what was on the page and then go off on a mad Carrie/Mia tangent. Could be a song, could be a rant, could be full-on sexual innuendo.

The first season was just phone call scenes. Her day on set involved a scene where her character and mine begin politely and end up insulting each other. It was fairly tame on the page, but then Carrie took it a little further, and we spent half an hour one-upping each other on the abuse while our channel exec stood by the monitor, horrified.

We finally got to know each other properly by the third season, which we filmed during the fall of 2016. Mia was featured more heavily, so Carrie was around more. She let her guard down, and we were grateful to be given the chance to really enjoy her company. She was an entertainer, obviously, on- and offscreen. Her wit is well documented — bottom line is, she was almost impossible to keep up with, her brain whirred constantly, every sentence had a punchline, every story a potted Hollywood cautionary tale — but I’m not sure her kindness and generosity are as well known. She was just a really nice lady, warm and fun. She would distribute presents to cast and crew with little notes, written in her gorgeous, elaborate handwriting, that were part poetry, part filthy prose.

We wanted to use the third season to get to know Mia, so we went a little deeper to explain how she became this loving but tough-as-nuts asshole of a woman. We were nervous because it wasn’t just the usual goofing around. But Carrie embraced it. And we knew as we were shooting that she’d given us something special. 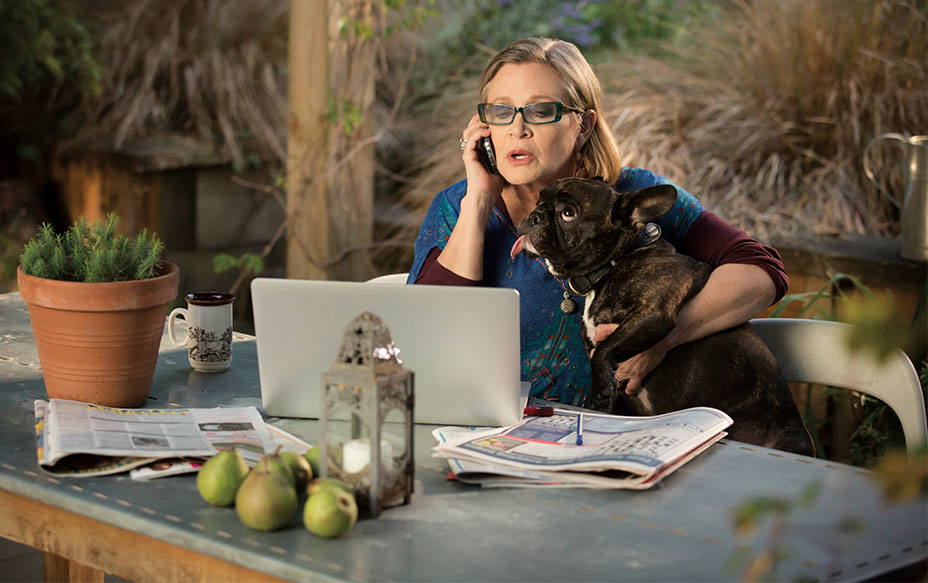 We had finished the shoot, and all of the episodes were assembled by the time we heard the news of her death. It knocked us all. She’d been there, just a minute ago, talking about plans for her life and career, talking about her family and the house she’d just bought in London. It didn’t seem possible that she was gone. She’d definitely been a bit more delicate this time. She had seemed to have a little less spring in her step, but nothing that gave a hint that she was struggling. Maybe our eyes just weren’t open enough.

Although we hadn’t gotten into fine-cutting episode six — her episode — by the time of her death, the tragic news didn’t have any impact on the choices we made. It was all there in the rushes; we knew that she’d given us some great scenes. Her delivery during the “Nanook of the North” bathroom scene — when Mia barges, unannounced, into our characters’ home — was immediately hilarious, and the power and control of her performance during the scene where she tells Rob that his father had abused her revealed new sides to Mia’s personality. Funny and tragic in equal measures. A great performance that made you want to know more about this lady. A privilege that we were unfortunately denied.

It was hard to watch in the edit, hard to see her so alive onscreen and yet no longer with us. And it’s hard for us to watch now. We miss Mia. And we really miss Carrie. We all wish we could have shared the final product with her because, as self-deprecating as she was, I think she would have been proud. She certainly made us proud.