It’s been a year and half since Catt Sadler quit her job as a host on E! News after finding out that a male counterpart was making double her salary. A female executive tipped her off, and it didn’t take long for her to confirm the “massive disparity in pay.”

Sadler wrote about the decision on her blog in December 2017, a few months after allegations against Harvey Weinstein came to light. She soon became a poster child for Time’s Up and the fight for equal pay in the workplace.

Since that seismic change, the Emmy winner has been pitching shows to TV networks, working at her production company Love Bug Entertainment and recording her podcast Naked, which debuts June 6, featuring Olivia Munn in the first episode.

A fan of podcasts like Oprah’s Master Class, The Goop Podcast and the Almost 30 Podcast, Sadler has finished six episodes so far and just booked Jennifer Lawrence as her next guest. “She usually lets it all hang out, so I’m excited to see what we get into,” Sadler says.

The journalist sat down with THR on Wednesday before an event hosted by women’s workwear brand M.M.LaFleur, which has a pop-up at the Beverly Center through Monday and tapped Sadler to star in a new campaign. The fashion company, founded by Sarah Miyazawa LaFleur, addresses pay inequity by having transparent pay tiers, so that every employee within a certain tier earns the same salary.

Here, Sadler reflects on the progress of wage equality in the entertainment industry, her goals with her “vulnerable” podcast and how fashion brands are “woke more than ever” in embracing social causes.

What change have you seen in the past year and a half in the industry?

I love the fact that here we are, 18 months later, and I remember the time I had made my departure. Time’s Up was born, and I remember there was this feeling like, ‘Oh this is going to be a moment, not a movement.’ And it really felt like, ‘Oh, people are wearing black to the award shows for #MeToo.’ There was a lot going on at the time, but I really think that probably most people thought it would be just another thing and it would disappear.

The fact that we’re still here talking about it, I think we’re moving the needle a little bit. People are organizing; people are speaking out. I have to think that some change has occurred because of all this, and so that really makes me happy.

What has the impact been like on your career? Do you feel more “successful” now?

Success is an interesting word. I will say that I feel really energized. I feel really satisfied. I feel liberated. I feel like I’m in a really great season of my life. It takes time. I’m now working for myself. I have my own production company, so I’ve had to really build. It’s been a season of building. But yeah, if success means I’m living on my own terms and I love what I do and I’m calling the shots and I see more of my kids, then yeah, I’m pretty good.

I feel great and I do have some TV things in the works in the moment also, because at the end of the day, that’s the core of my skillset, it’s what I love to do — interviews and TV. To be in pitch rooms and in development and working with a new network, it’s exciting. I wake up excited. I feel like I’m learning so much. So yeah, it was definitely the right move.

What still surprises you about what’s left for the industry to do in terms of pay equity?

The most overwhelming thing is there is no obvious answer. It’s not a straightforward fix even for corporations who want to make change, I think it’s a really laborsome thing to get your head around — restructuring your whole business. The fact we’re here with M.M.LaFleur tonight, I mean hats off to Sarah, it’s her company and she, having I think been a victim of a very similar situation where a male was making more than her and whatnot, and now that she had her own company, she was like, ‘Listen, we’re just going to be transparent. Everyone is going to know what everybody makes.’

So it’s not cheap for companies to do that. It’s a big investment to even restructure how people get paid and how that goes and research. It’s a laborsome effort for entrepreneurs, but a worthy one [that] down the line will certainly benefit the company, the employees, the women that work there. …

There’s potential legislation that will hopefully be enacted, but at least I think women in particular are finally going, ‘Hold on, wait up,’ and asking the question. I don’t think people were even asking the question. I wasn’t! … Businesses are savvy enough to know that they have to be a part of this or it will be a publicity nightmare for them because they will be exposed and they’ll look bad.

With legislation that you mentioned, do you think there’s an opportunity for Hollywood to do some lobbying? Have you been involved in lobbying?

I know there is some movement. There’s something called the Paycheck Fairness Act [introduced in Congress in January 2019]. There’s some small things happening. I haven’t been intimately involved with any lobbying, but I have realized in the last year and a half that the best thing I can do is continue making noise about it. I have people that come to my platforms and watch what I say and what I do.

We’re here today for M.M.LaFleur. Why is it important to you to support female entrepreneurs and female designers?

First of all, it is sheerly fun. Honestly, fashion for me, I’m a little girl from Indiana. I was from the farmland. I looked at Vogue when I was little and it made no sense to me. I was like, ‘These people look like clowns.’ I didn’t understand it at all. I got my first job in Hollywood and I worked with a stylist for the first time. I fell in love with the art of getting dressed and I learned what a pair of nude shoes could do to an outfit to elongate my leg or what a belt could do to cinch my waist. I learned so much, and I feel like women have always been, but more than ever, are just at the forefront of all the meaningful change like I just mentioned. Like Sarah, like M.M.LeFleur.

So if I can align myself with these brands and shine a light on them or celebrate what they’re doing … how can I radiate a strength to girls and women, to help them know their worth? This is a company that stands for that and walks the walk. A lot of people put it all on a T-shirt, but aren’t doing the actual work.

It already is. To your point, it’s happening. I think that’s really cool about fashion today, versus say 20 years ago. It really does feel like there’s a message behind everything. And maybe there was some of that going a la Gaga in a meat dress or whatever. At the time, that seemed so out there. But now, it’s everywhere, from what’s going on at the border. I have a bunch of friends in fashion who are wearing T-shirts to support the outcry of what’s going on there, so there is a lot of political messages in the beauty business in particular.

People aren’t getting away — companies, designers, celebrities — with just existing for the fact of the superficiality. I feel like people are woke more than ever in these particular industries, everything from pay issues to body shapes and sizes. And I think actually that’s one of the best things to come out of social media and the digital age in which we’re living, because people have something to say and they’re saying it very loudly and regularly. 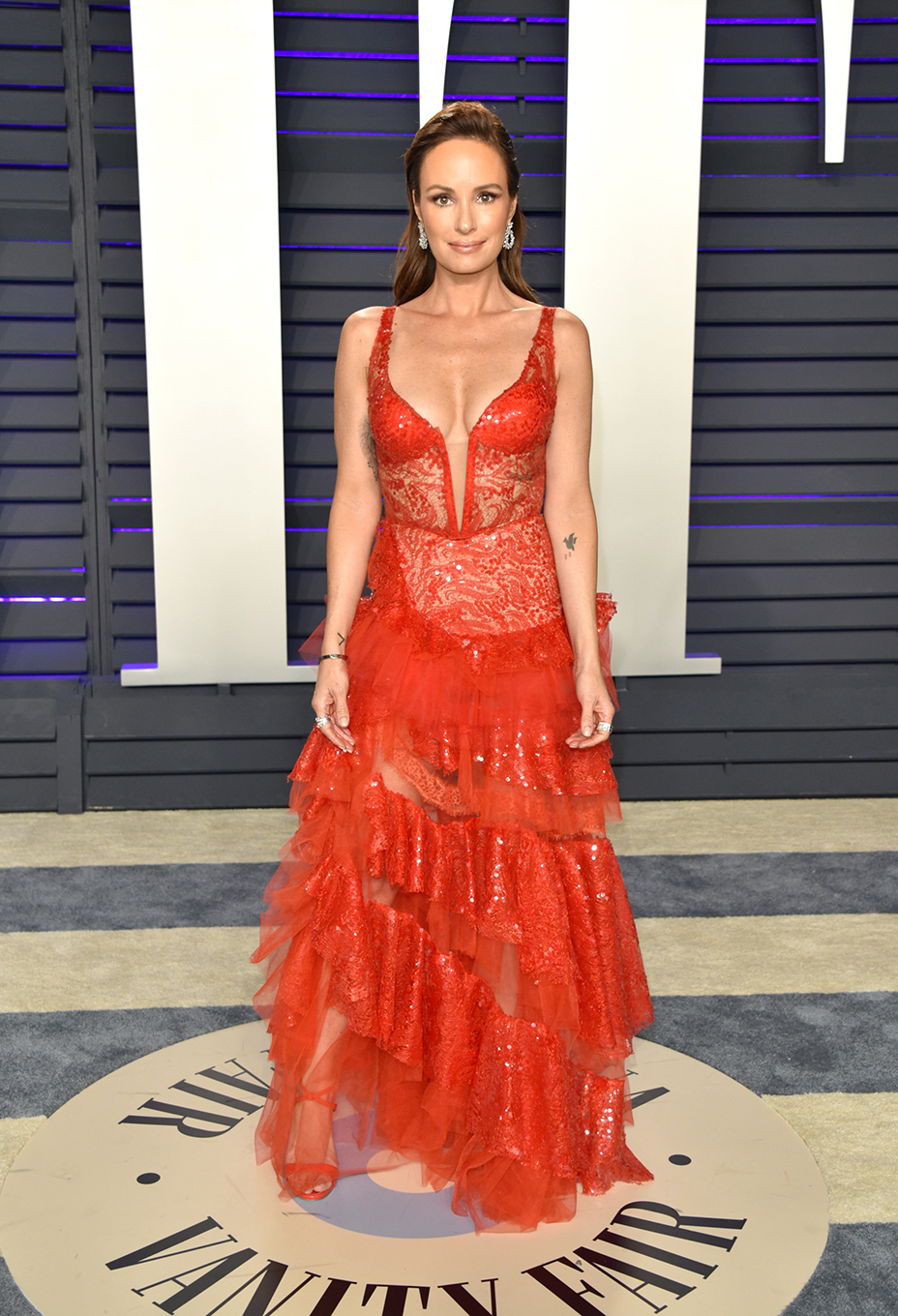 In the past year and a half of developing your own brand outside of E!, what specifically did you learn about running a business?

The big one that stands out to me is everything takes forever. I was in news for 20 years. Local news for 10 years, at E! for 12 years. I was at a daily show. You would do the news, and then you’d leave it there and then another day would start. And it was just this cycle that was very predictable. And when you’re creating and you’re developing and you own things and it’s your brand and your idea, and you’re curating, there’s so many pieces of that puzzle from a network level to production company level to I have a whole team of people that weigh in on all that stuff. And it just takes time. I understand that but it’s new to me.

You have your Naked podcast coming up in June, going deep with all women guests. How did that idea of the topic come about?

With this new chapter of my life, I’d always been ‘Go on assignment. Interview this person.’ And it was the first time in my life, where — I love interviewing, that is the key foundation of what I’ve always done is the art of the interview. It’s my favorite thing to tell people’s stories and to really converse and have real conversations, and that wasn’t always the case covering the Housewives or the Kardashians or whatever. I didn’t really get to deep dive into humans.

So I was like, ‘Listen, I love women. I want to celebrate females. How can I have deep conversations that are more vulnerable, more raw, where women are just exposing themselves rather than just the same old clickbait, whatever headline that is so typical these days?’

I’ve been booking guests that I am just personally fascinated with that I know have real stories, that I know are up for going there with me, who aren’t manufacturing their answers. There’s not a publicist standing 10 feet away telling them what they can and cannot say. So it’s in my bedroom, and we’ve had some great guests so far. We’re covering really deep topics: toxic and abusive relationships, childhood trauma, infidelity within marriages. … Yeah, you might be an A-list celebrity and you might be on a movie screen, but oh my gosh, you also struggle with self-worth? You still have days where you feel terrible? So far it’s been everything I had hoped it would be.

Through your relationships with actresses, do you attend Time’s Up meetings?

I would. I remember when it was first born, and I know that a lot came out of that meeting that had to do with me and what happened on the Golden Globes that day and whatnot was born at a Time’s Up meeting, but I’ve never actually been invited. I would go.