Americans spend a lot of time in the car. In fact, per a 2016 AAA report, U.S. drivers spend an average of 17,600 minutes behind the wheel each year.

While drivers (and their passengers) often listen to the radio, audiobooks or podcasts, that’s a lot of time (12 days worth, in fact) lost sitting in a car. Audi is looking to change that with a new backseat experience that it demo’d at the 2019 CES consumer technology show in Las Vegas.

Executives from the car company revealed Jan. 6 that they have established a new startup called Holoride, with a minority investment from Audi itself, that is committed to making virtual reality content that car passengers can experience during their drives. Audi Electronics Venture, which developed the technology, will license it to Holoride so that it can create an open platform for these new in-car experiences. “In most cases, transit time feels like wasted time,” explained Nils Wollny, Audi’s head of digital business and the future CEO of Holoride, during a short presentation for press. He went on to describe the experience as one that works best in a car.

What Wollny and the rest of the Holoride team has built isn’t as simple as strapping on an Oculus Rift or Google Daydream and jumping in a car. Holoride has developed technology to create experiences — dubbed “elastic content” — that adapt to a person’s ride, using GPS data to know when the car stops, speeds up and slows down. To show off just exactly what that means, they teamed up with Disney to create a demo featuring Guardians of the Galaxy’s Rocket.

To see the experience, Marvel’s Avengers: Rocket’s Rescue Run, journalists were driven to a racetrack about 20 minutes outside of the Las Vegas Strip, where they were invited to sit in the back of Audi’s new e-tron electric vehicle and given an Oculus headset. During the next five five minutes, as the vehicle sped up to as much as 90 miles per hour while making two loops around the track, the passengers were asked to help Rocket on a rescue mission and expected to shoot at enemies along the way. 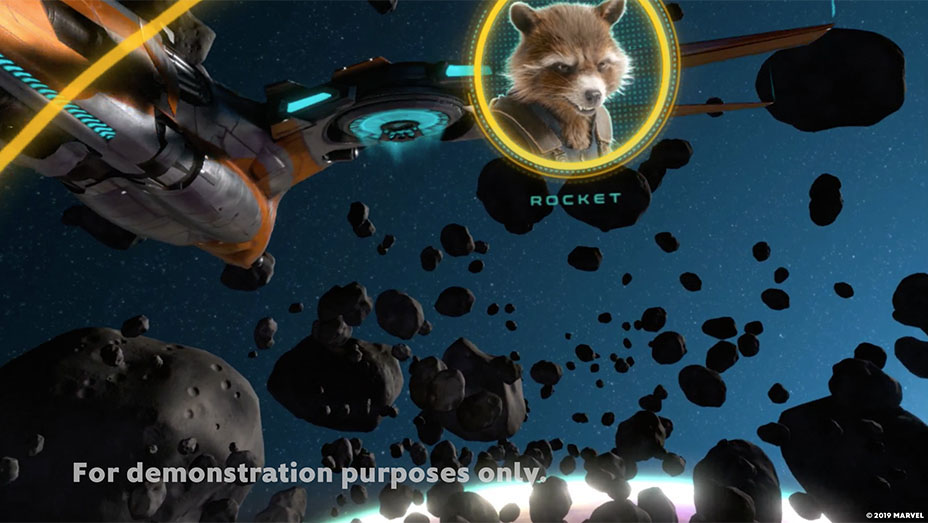 When the car started up at the beginning of the experience, so did the virtual spaceship. At a stop, the ship also paused to take a call from Iron Man. Curves around the track turned into curves through space to avoid oncoming danger. This type of adaptive experience is what Holoride means by “elastic content.” The experience is meant to speed up or slow down with the vehicle and adapt based on the turns that the car is making.

Wollny explained to THR after the demo that the experience would be completely differently on a different course where someone couldn’t drive as fast or had to make more frequent and sharper turns. “It can change every time you drive,” he said.

Mike Goslin, vp of Disney Games and Interactive Experiences, adds that the experience benefits from the real movement of the vehicle. “There’s nothing that can match true motion through the world,” he said.

For Disney, teaming up with Holoride gives them an opportunity to develop new technology early and look for ways to expand the way it delivers IP to fans. “They’re developing their technology at the same time that we’re trying to figure out how to do entertainment in this kind of environment,” he said, adding that while Rocket’s Rescue Run won’t be commercially available, he hopes to continue to work with the company. “We’re very interested in the long-term future here [of this entertainment experience].”

For Holoride, which will officially start operating in February, the plan is to sell a software kit to content developers to make programming that could live on a Holoride app. They expect to begin looking for more content partners on to develop using the technology later this year and to bring the entertainment to market within the next three years using standard VR devices. Over time, there could also be augmented reality and mixed reality applications.

Although Holoride offers a glimpse at the type of content that could be popular in the age of self-driving vehicles, Wollny noted that the current plan is to focus on the market of passengers who use ride hailing apps and ride-sharing services. “Today, Audi builds cars for driver,” he said. “We really want to start right here, right now. No one knows about the autonomous future but the backseat passenger is already a really attractive target for many big markets.”