STX isn’t in the $1 billion franchise game, but the studio on Tuesday made it a point at CinemaCon in Las Vegas to bring out talent from the Marvel universe and beyond.

Chadwick Boseman showed off the first footage from 21 Bridges, a crime drama in which the Black Panther star plays a detective whose police officer father was killed in the line of duty decades earlier. When eight police officers are gunned down during a robbery, the detective makes the decision to cut off the isle of Manhattan so that the perpetrators won’t be able to escape.

Boseman produced the project along with his Avengers: Infinity War directors The Russo Bros., and he chose it as his follow-up to the $1.34 billion success of Black Panther. The actor shadowed LAPD and NYPD officers to prepare for the role, something that at times was challenging.

“At times it was a lot of fun hanging out with them; at other times it was horrific, some of the things you experience,” Boseman said. “One of the things they talked about a lot was how the job affects them personally — how the job takes over their entire lives, and I think that’s an element of this film that we try to stay true to.”

STX film chairman Adam Fogelson also brought out Dave Bautista (Guardians of the Galaxy) after showing off a trailer for My Spy, an action-comedy about a young girl (Chloe Coleman) who is bullied at school and manages to convince a spy (Bautista) to train her in his ways. The actor and his young co-star got some of the biggest responses of the presentation when they talked about a swear jar they had on set.

“A lot of people were swearing, because we were able to raise $155,” Coleman said. Bautista rejoined: “More than that. I gave you, like, $200 myself.”

Bautista, a noted dog lover, also said he disagreed with the old Hollywood adage of not working with kids or animals. “I love kids and I love animals. I don’t know, whoever came up with that stupid saying, it’s ridiculous,” said the actor.

Fogelson also revealed a few new projects in the works, including Bad Moms’ Moms, the third installment of the Bad Moms film series which launched in 2016. This time around, it will focus on the mothers of the bad moms, played by Susan Sarandon, Christine Baranski and Cheryl Hines.

Hunnam, who previously worked with Ritchie on King Arthur, claimed the director didn’t want to hire him for that film: “Although he said he wasn’t really interested in meeting me, I said, ‘Fuck that. I’ll fly myself over and can we just have a cup of tea together.'” Three and a half hours later, they were still talking and hadn’t even gotten to talk about the script. “We discussed at great lengths the merits of the California marijuana business, which I know a small amount about,” Hunnam said to laughs in the crowd.

Golding had a somewhat similar experience on Ritchie’s latest film, though it involved whiskey — not tea — at the director’s house. 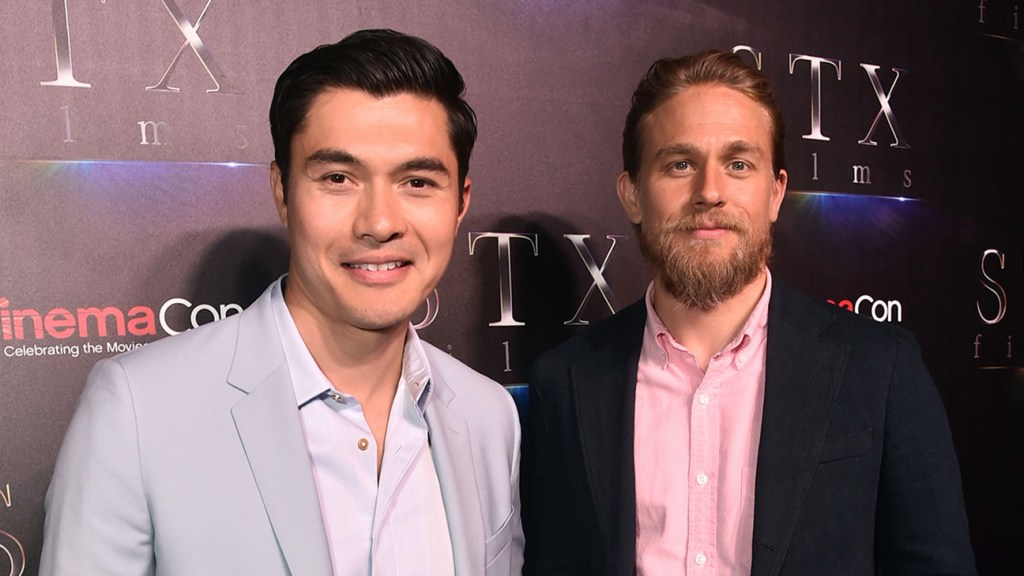 The STX panel also included an appearance from Diane Keaton, who showed off her senior citizens-focused Poms, a comedy about a group of women in a retirement home who decide to start a cheerleading squad.

Keaton noted that in an earlier point in her life she had once tried out for cheerleading, but didn’t make the cut. “If I show you my legs, you’ll see why,” she said, pulling up her dress slightly to show the crowd. “They’re skinny! There’s no strength in these legs.”

Katie Holmes brought footage for Brahms: The Boy II, the sequel to the 2016 horror hit. The footage centered on a couple and their son, who has undergone some sort of trauma and is no longer speaking. Things only get worse when they move into a large British mansion, where the boy befriends a porcelain doll who apparently speaks to him.

“This was a story about a mother and her child and this evil presence that is influencing her child,” said the actress. “That is such a universal fear for every parent.”