Chance the Rapper is best known for two things: rapping (as his name would suggest) and overalls.

After appearing at the VMAs in khaki-colored Sheila Rashid overalls layered over a plain white Calvin Klein tee and tied together with a matching New Era “3” khaki cap from his own collection, the 23-year-old set the internet aflame in search of the elusive perfect pair of overalls. 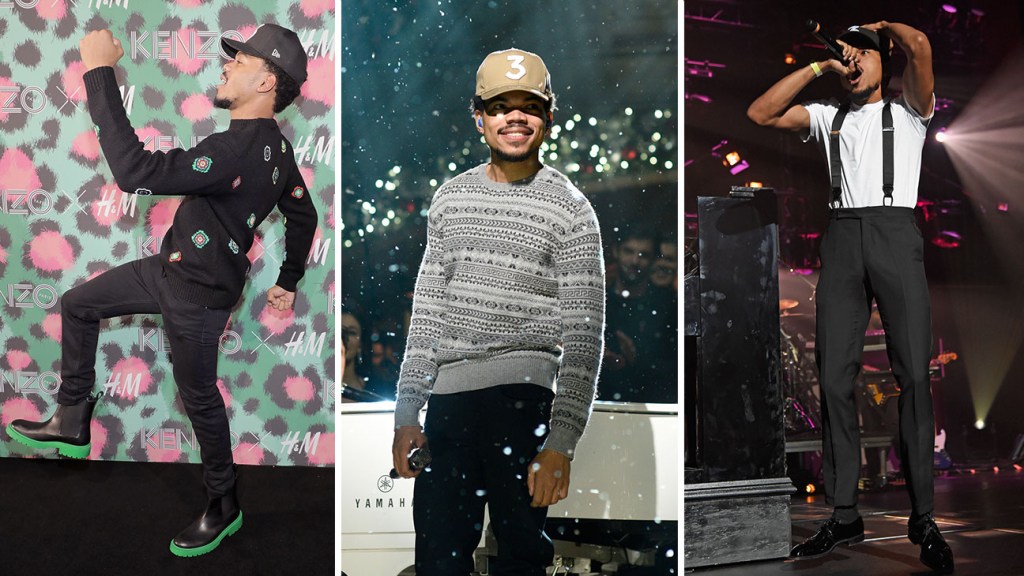 With the help of a fellow Chicagoan, stylist Whitney Middleton, Chance has been cultivating a signature look that is redefining hip-hop fashion. Whereas past generations of rap royalty (Diddy, 50 Cent, Jay Z, etc.) repped the flashy, baggy and blingy rags — prioritizing designer labels above all else — Chance and contemporaries like Tyler, The Creator; Childish Gambino; Vince Staples; and, to an extent, even ASAP Rocky are part of a new league bringing an egalitarian, unfussy style to the stage via tucked-in T-shirts, overalls and suspenders — all in bright primary colors. Think: more Steve Urkel, less Puff Daddy. 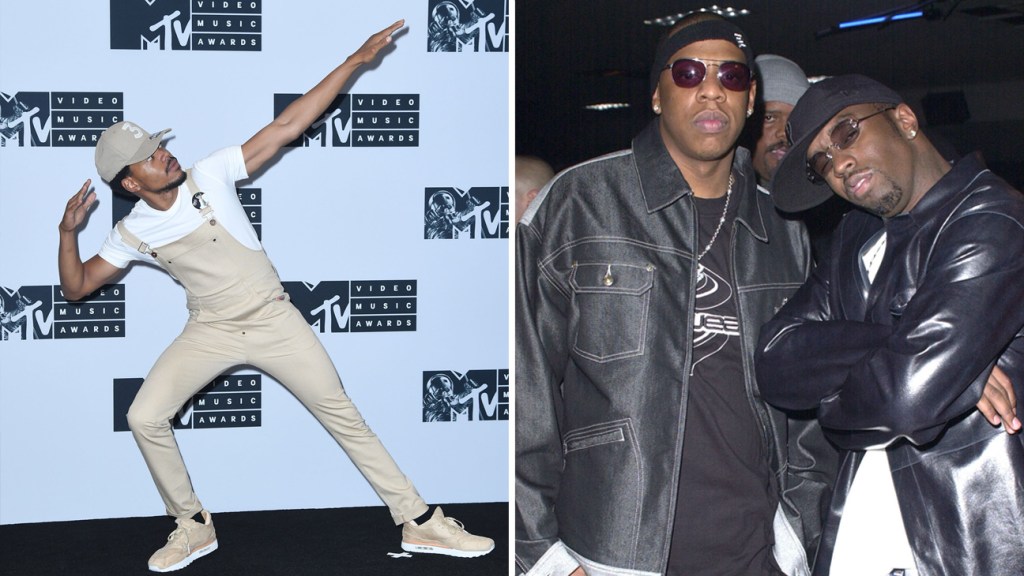 There’s a nostalgic air to the clothes, as though his looks could very well be adult-sized re-creations of mid-‘90s childhood wardrobes. (Tyler, The Creator actually Instagrammed himself as a kid wearing overalls similar to those that his Golf Wang clothing line also sells.) The fitted ringer tees, baseball caps and Cosby sweaters worn by Chance onstage just as easily could be spotted on an extra in The Sandlot or on the Stranger Things rugrats. But Chance’s references to a happy childhood aren’t limited to his clothes; from life-size Sesame Street-style puppets onstage at his shows to the name of his latest album, Coloring Book, the ties are strong.

In the age of fashion and entertainment revivals, however, Chance’s OshKosh-esque style feels fresh rather than stale, as the grunge look has started to become.

Pret-a-Reporter caught up with Middleton to talk about dressing Chance for everything from the stage to SNL to the White House State Dinner (which he attended with his politico dad, Ken Bennett, a former aide to then-Senator Barack Obama), what it takes to build an iconic style and how both Chance’s style and music are a beacon of positivity in an age of uncertainty.

This was a formal handshake in transition. It ended very black

When did you start working with Chance?
I met Chance at a shoot for Status magazine in 2015. While I was out doing the pull, I got an email that he was going to be headlining Pitchfork Music Festival that summer. It’s my favorite festival, so I made a mental note to work hard at the shoot and reach out around Pitchfork to see if they had any needs for stage or anything. I did exactly that, and it went from getting him one look for stage, to doing four different looks and quick changes, to getting 20 choir robes.

Then the VMAs came up, the Beyonce birthday party, and shortly after that was the Kit Kat commercial and the tour, so things just really started compounding from there.

You’re both from Chicago. Do you try to look for Chicago designers first?
Chance really likes to support the Chicago arts community. Over the summer, Chance was asking for overalls, but there really weren’t a lot of great menswear brands doing cool overalls, so I found Sheila [Rashid] and brought a photo of her overalls to a fitting and showed him, and he was like, “Yes! I want these.” It was really cool connecting him with her. The other overalls that he wears — he wore them on Ellen — are Publish Brand.

Has he always been into overalls?
He wore overalls more at the start of his career, but he didn’t start requesting them again until this summer.

How would you describe his aesthetic?
His style is really clean and classic and also very consistent. He has very strong preferences for specific cuts and shapes that he likes. For example, he loves a crewneck or a three-button Henley shirt. Jacketwise, we’ve gone between bombers and a Levi’s classic trucker jacket or other brands doing their variations on the classic jacket.

It’s still aspirational because he really brings the wardrobe to life and infuses bright colors, and yet it’s still something that his fan base can go out and emulate, which I think is really important because Chance is a great person. He’s a man of the people, and he wants to be inclusive in his messaging.

Do you mostly look for new designers? Or is it a mix of both high and low?
Mixing high and low together has been a great approach. We’ve gotten really amazing pieces from Kenzo, and they’ve been an incredible partner, creating some great things for him to wear for his Magnificent Coloring World Tour. It’s really fun to work with pieces like that, mixed in with everyday basics. He wears Nudie Jeans, and he also wears a lot of Ralph Lauren. As he grows and as I grow as a stylist, we’re definitely looking toward more of the high-level brands.

Do your approaches differ for red-carpet and onstage looks?
Sometimes he’ll give me a word or two, like for the Beyonce birthday party, he asked for higher-waisted flared men’s jeans and a belt and “those T-shirts with the bands” — and I said, “Oh, a ringer tee.” So getting those guidelines and then going out and finding different pieces that fit but are really dynamic, maybe show him something that he hasn’t worn before. It’s really all starting with him. It really starts with what the artist wants.

Do you have any specific style inspirations or a time period you really look to?
Michael Jackson, for sure. Michael is a huge inspiration for Chance, and separate from that, he’s a huge inspiration for me as well. His wardrobers were with him for 25 years, and they also employed a very formulaic approach. There were very few patterns that they worked from for Michael. That military-jacket look was one pattern, but they used different fabrics and textures, so that’s a really big inspiration point — that consistency wasn’t trying to be iconic. It was his preferences with a little bit of superstition mixed in. But what it did was create a silhouette and a vibe that people could emulate. People could take a picture of him in silhouette and you’d know who it is, which really made him iconic in his fashion. The Michael button [at the VMAs] was a cool moment, to sort of bring the inspiration back to the forefront.

Everything else is based on Chance’s music and the color palette that he’s feeling at the time. Coloring Book has that kind of heavy salmon, watermelon influence, so those colors have been coming up a lot more. We’ve been working a lot with mixing primary colors in with some pastel notes. So again, it’s coming from the music and our mutual inspiration point and also what we are dressing him for.

Do you think his tendency toward bright colors and an almost childlike influence (the idea of a coloring book and overalls — a popular kidswear item of the ‘90s — etc.) is a reaction to the time period we’re living in, both in terms of the political climate and global events? Or is it purely coincidence?
I think there is a childlike wonder to Chance. He has the song “Grown Ass Kid.” His music is very enlightening, and there’s such a positive message to it that it sort of naturally lends itself to us reaching for brighter colors and bold, cheerful clothes that highlight who Chance is, rather than becoming the statement of the messaging. I think his clothing is a clean, strong backbone to the visual element, rather than being the center focus.

His shows are very involved. This tour was so cool because there was puppetry involved and a lot of amazing light shows. So the wardrobers really have to highlight that, rather than distract from it. So I think that’s part of it. But it’s always my goal to make sure what he’s wearing highlights not only his music, but who he is as a person.

Chance is breaking the mold as a very independent artist who is doing a lot to ignite the industry in a new way. We’re definitely not trying too hard to make it mean something, I just think it’s a natural way to work with an artist like Chance who is kind of in his own direction. For him, it’s about the fit, the color and how he feels in the clothes, rather than the labels.