How does a brand announce that one of its boutiques is capital-I Important? A rope of oversized faux pearls that stretches four stories into the sky is a nice start.

Crafted in mirrored stainless steel and hand-blown glass spheres rolled in white gold leaf, the 60-foot sculpture is the can’t-miss moment when you enter Chanel’s newly reopened flagship on New York’s East 57th Street. French artist Jean-Michel Othoniel, who’s been interpreting pearls in glass artworks since 1997, has created more than 30 necklace-like sculptures for Chanel boutiques around the world; each piece has been commissioned by architect Peter Marino, the longtime visionary of store design for Chanel, Dior, Bulgari and others, but Othoniel’s work for this New York retail space is his largest to date.

High Jewelry From Chanel, Cartier and Others Debut Just in Time for Emmys Red Carpet Planning

“Peter is an architect, so for him, [the notion of scale] is important,” Othoniel said in a statement. “When we first met, I was creating works that were two or three meters high. With him it became seven or eight meters, which was already exceptional. And then we went even further with an 11-meter piece for the Chanel boutique in London. In New York, we’ve reached 17 meters. These are major technical feats … the work arrives in the boutique at the very last minute — it’s a new challenge each time — [and] you must be able to dismantle it in response to the architectural context. Often you’re squeezing a monumental sculpture through a tiny door.” 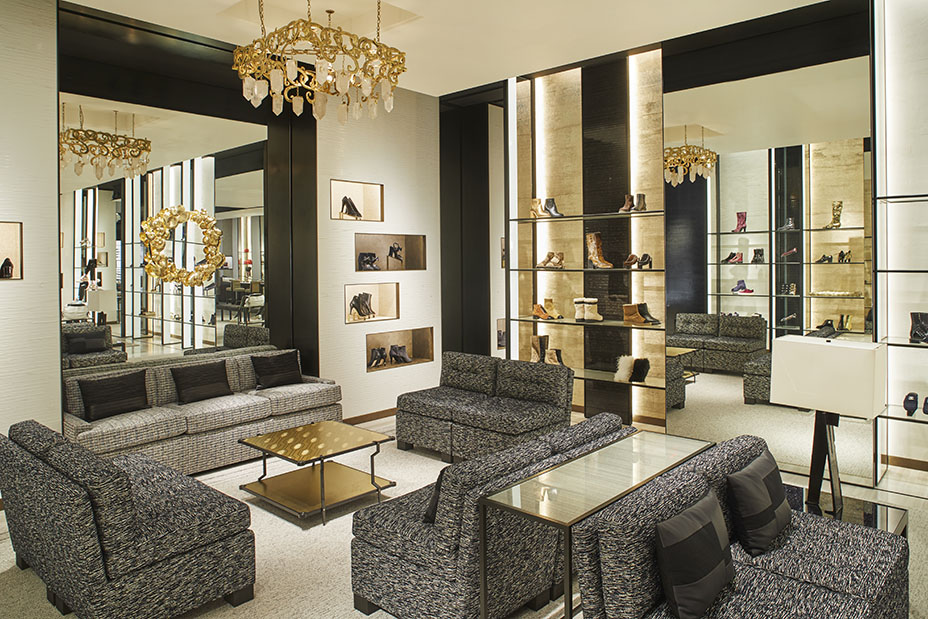 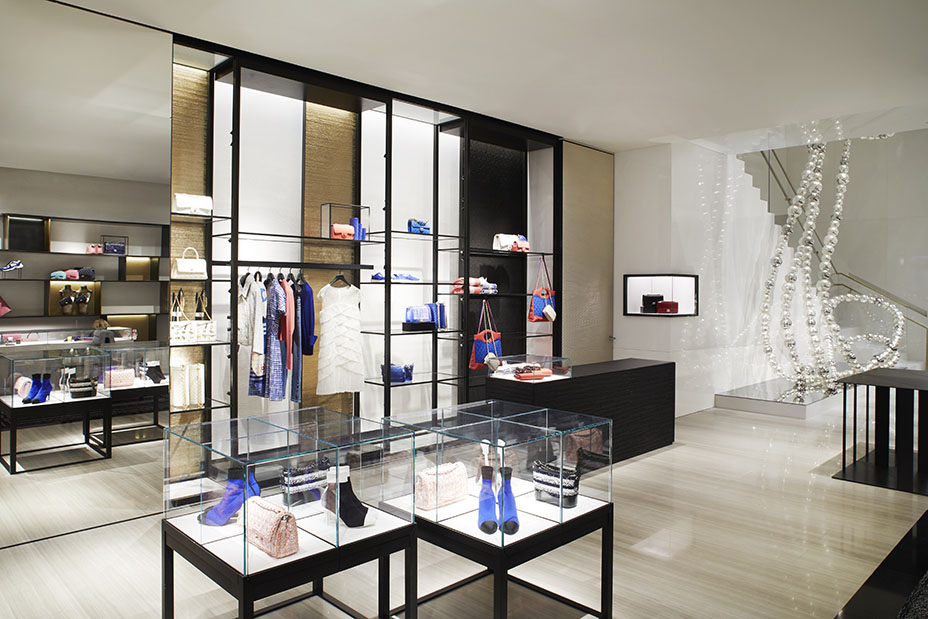 Interpreting one of Gabrielle Chanel’s most iconic elements is just one part of an interior design that seems to delight in paying tribute to all of the house’s codes. Beyond those enormous pearls on the first floor, Chanel’s beloved Coromandel screens inspired the dark crackled lacquer on a wall in the watch and fine-jewelry salon; a 12-panel Coromandel screen dating to the Qing Dynasty in the 18th century, meanwhile, serves as a backdrop of a ready-to-wear salon on the fourth floor.

In the second-floor shoe salon, a bronze and rock-crystal chandelier was crafted by Maison d’art Goossens, a jewelry and metalwork house that began working with Coco Chanel in 1954, and was the first atelier to craft Chanel’s Byzantine-inspired crosses as brooches and pendants.

At 14,000 square feet, the 57th Street boutique is now Chanel’s largest in the U.S., expanding its space from three to five floors, with the top floor designated for private shopping and other VIP experiences. While the location debuts with Chanel’s Cruise 2018/19 collection, a capsule grouping of exclusive products also has been produced to celebrate the opening.

Two sizes of a limited-edition 2.55 bag (priced at $7,600 and $8,800) and a matching wallet ($1,575) are embellished not only with New York-centric charms — a taxicab, the city skyline and a golden apple accented with Chanel’s double-C’s — but also shapes known to any fan of the brand, including the No. 5 bottle. 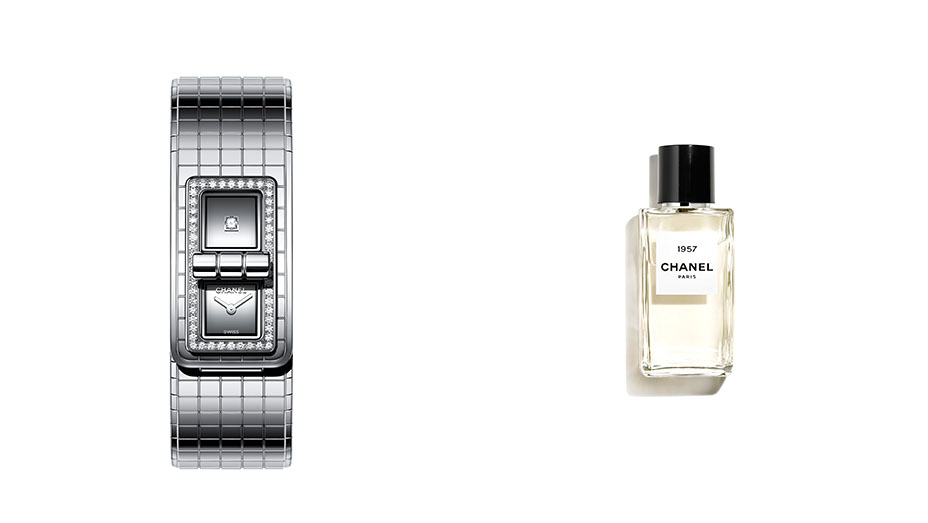 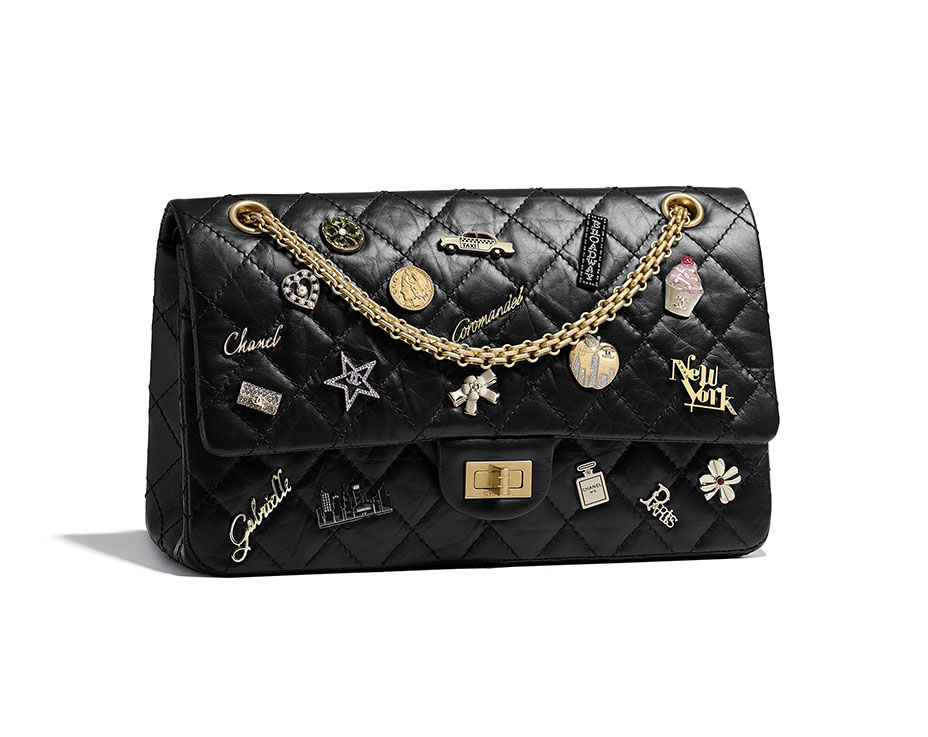 A Code Coco watch, crafted in steel with diamonds on the bezel and a mirrored dial, is limited to just 20 pieces and is priced at $9,760. And as a nod to the flagship’s address, a “1957” scent has been added to the Les Exclusifs de Chanel fragrance collection; the layered musk was created by in-house perfumer Olivier Polge. The scent comes in two sizes and sells for $200 and $350.

While retail space in the boutique has almost doubled, the expansion also afforded an opportunity for a full floor of private salons, where celebrities and other VIP clients can shop — or perhaps plan red carpet looks? — in luxurious seclusion. Marino designed these exclusive spaces to feel both warm and intimate, with sofas in signature Chanel beige and artwork by Icelandic-Danish artist Olafur Eliasson, part of his Eighteen Moons in Penumbra series, as well as a portrait of Gabrielle Chanel — its sparkle courtesy of diamond dust — by Brazilian artist Vik Muniz.

You don’t have to be a VIP, however, to glimpse other pieces of art both selected and commissioned for this updated flagship; indeed, work by Robert Mapplethorpe, Jenny Holzer and Y.Z. Kami is also featured throughout the boutique. And while the stairs that wrap around Othoniel’s four stories of pearls might prove too inviting, don’t miss the elevators, which also received an inventive treatment: Marino commissioned British artist Idris Khan to adorn those walls with chalk and oil stick photography in black and white. 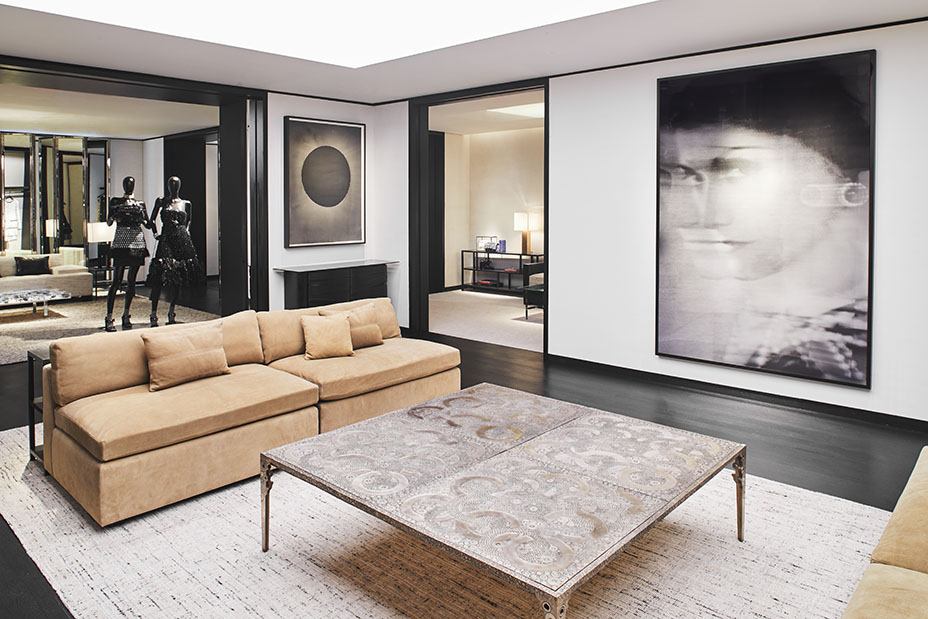 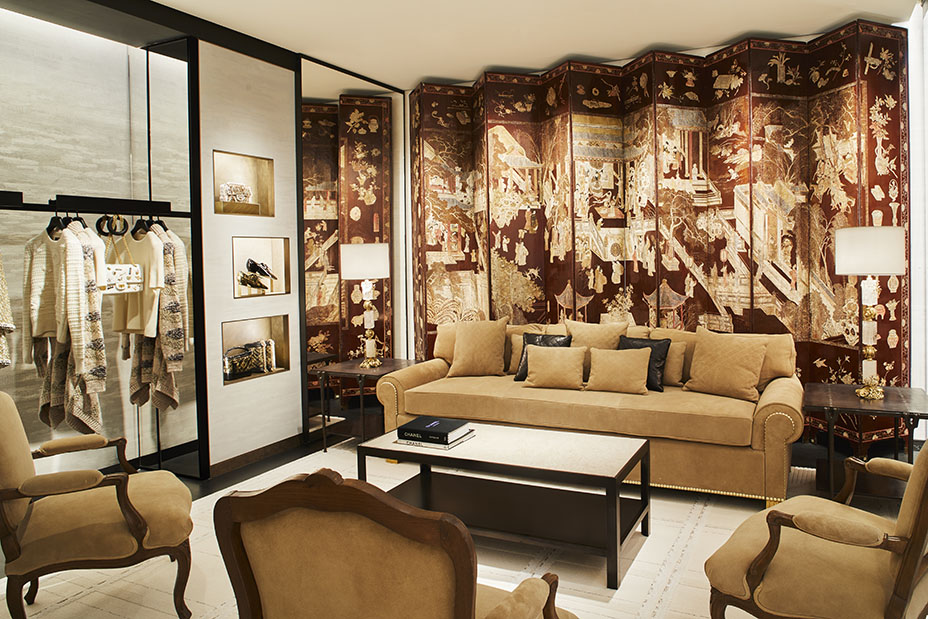