Channing Tatum wants Hollywood studios to know that when he’s hired as a voice actor, he brings his whole body.

As he arrived at the premiere of his latest CG-animated effort Smallfoot at the Regency Village Theater in Westwood, Tatum admitted that, when recording the voice of his Yeti character Migo, he couldn’t resist getting very, well, animated.

“When you’re in the booth, you sort of just act a fool,” he laughed, telling The Hollywood Reporter he threw his entire physique into his performance while laying down his vocal tracks. “You just act like you’re a complete schizophrenic or something — you’re going insane.”

He confessed that he went so cartoon crazy in the recording booth, the filmmakers frequently had to remind him to focus his performance back to the microphone, “because I was over there, over here, over there. They really just needed to have someone running around with me with a mic.”

Asked if his increasing appetite for voice roles — he’s played The Book of Life’s hero Joaquin, Superman in The Lego Movie and its upcoming sequel and George Washington in the forthcoming America: The Motion Picture — provided an excuse for him to go a bit more buck wild than his on-camera performances, Tatum offered a counter-proposal: “I think it’s more of an excuse for everybody to accept my already insanity.”

But the actor also revealed a more serious love for adding animated projects to his resume. “The director and the animators really get to design a world, and you just offer them insanity, and you let them pick what colors they’re gonna paint with. Because I have no ownership over it, in a way. When it’s my face and everything’s me and it feels so honestly me, I think it puts you in a different head-space. This you can just send it, especially with a comedy, you don’t know what’s gonna work. You don’t know what they’re gonna animate, so you just have to go, “Here: this is what I want to give you guys, and we’ll see what you like about it.”

Actress Zendaya, who plays the rebellious Yeti Meechee, who unlike the rest of their hidden mountain village believes that Migo has actually encountered the legendary Smallfoot creature — a human — that dwells below them, says she also opened herself up in the booth and ultimately saw her mannerisms reflected in her on-screen alter ego.

“They definitely record us visually,” she explained. “Whenever we’re doing our natural hand movements or face movements, when they’re animating they’re able to sprinkle some of that in there. So there’s a little bit of me in there. There are a few times I’m like, ‘I remember doing that!’ so it’s pretty cool.”

Jane the Virgin’s Gina Rodriguez plays Kolka, another Yeti invested in believing in the Smallfoot discovery, confessed that her own physical enthusiasm created chaos more than once. “I actually always have to be careful because I hit things, and then the sound guys are like, ‘Oh Gina, don’t hit that! Gina, Gina, we can hear you popping in there!’” she laughed.

The film’s co-screenwriter, lyricist and director Karey Kirkpatrick said the cast’s gameness was a great compliment to the fact-paced, broadly physical sense of comedy his animation team wanted to bring to the Warner Bros. film, having built the raucous spirits of past cartoon greats like Tex Avery and Chuck Jones directly into the movie’s creative DNA.

“A big part of what makes animated movies work is storyboard artists,” said Kirkpatrick. “And so for any of these sequences, you sit around and brainstorm them as visual gags. And when you tell a storyboard artist that they can pay homage to the early Looney Tunes things, to Chuck Jones, the handcuffs are off! And my mantra was ‘Let me tell you you’ve gone too far.’ And I did have to a couple of times. But for the most part, I mean that’s how we ended up with some of the great comedic sequences that we have.”

Kirkpatrick, who was of an age to be fascinated by the 70s- and 80s-era boom in Sasquatchian speculation, says he was keen to adapt Spanish animator Sergio Pablos’ book Yeti Track — which flips the script by making humans the mythic, unseen creatures — to the screen. “It’s a really fun premise to play around with,” he said. “It’s always fun to get into a unique point of view as a writer, and to look at us as the weird animals. That’s always fun. And so it allows you to make a little bit of commentary on our character, on what we’re like. And then also when we got a chance to make it a musical, that was just a dream come true for me to be work on an animated movie musical as a director, and as the co-songwriter. That kind really sort of lifted me into the challenge of expressing some of these things through song.”

As Kirkpatrick tended to the film’s big picture perspective, veteran animator Jason Reisig came aboard as co-director to refine the animation production and tackle its unique visual complexities. “Every animated character has a lot of fur on them,” said Reisig. “They don’t just have simple generic fur: it’s long flowing fur, and one has curly fur, and one actually has fur that looks like a dress and the shawl on top. Then you add in ice and snow and the refracting. It was fun to try to play with the artistic elements of that.”

And there was simple joy in the outrageous sight gags as well. “You’re able to do some Road Runner-type of feel,” said Reisig. “There’s a sequence where Migo’s falling down the mountain and rolling in a snowball and landing on a bridge and falling into cliffs and creating character-shaped holes. There’s so many homages to Looney Tunes, down to the shape of their eyes. It’s a very unusual to have characters with long oval eyes. That’s very Bugs Bunny, and the whole Warner Brothers character library.”

The film also features a future co-star of Bugs Bunny: new L.A. Laker LeBron James, who’ll soon be headlining Space Jam 2 and who attended the Smallfoot premiere with his wife and three children. James also played a conspiracy-minded Yeti, and Kirkpatrick admitted that he’s having a little time-delayed starstruck experience with the NBA star/rising Hollywood mogul.

“He’s just so egoless, honestly, and so great to work with – he just kind of threw himself in, which is typical,” said Kirkpatrick. “I’m probably just now realizing I might look back on this in 20 years and go, ‘Well, that was kind of a big deal!’ I think he’s gonna do down as like one of the greatest ever. I’m going out on a limb, obviously.” 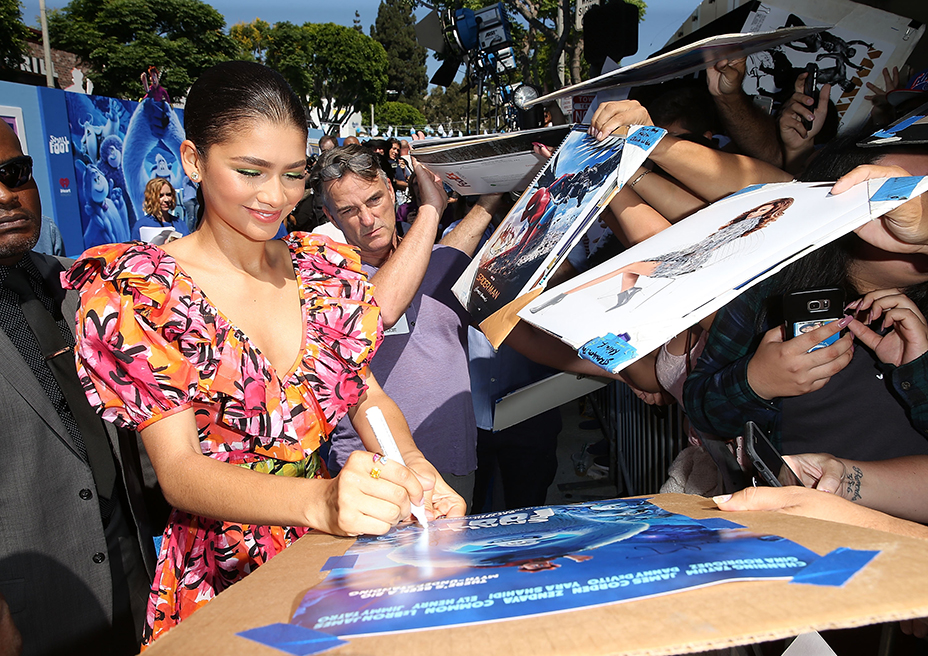