Charles Manson, the sinister ringleader behind the grisly 1969 killing spree that took the life of young actress Sharon Tate and six others, died Sunday, authorities have confirmed. He was 83.

Manson died of natural causes at a Kern County hospital, according to a California Department of Corrections statement. He had been serving multiple life sentences in Corcoran State Prison in Corcoran, Calif., after being convicted in January 1971 of conspiracy to commit the murders. TMZ was the first to report the news, saying that Tate’s sister Debra had told the media outlet that she had received a call from prison officials informing her of his death.

Like his followers, or “family,” Hollywood was attracted to Manson on several occasions. Perhaps the most notable onscreen portrayal of him was turned in by Steve Railsback in Helter Skelter, a CBS event telefilm directed by Tom Gries that aired over two nights in April 1976.

Based on the best-selling 1974 book co-written by Los Angeles County assistant district attorney and Manson prosecutor Vincent Bugliosi, it was a ratings sensation, attracting an estimated 50 million-plus viewers.

Before the murders, Manson aspired to a career in the L.A. music scene. After learning to play guitar in prison, he became friends with Byrds producer Terry Melcher (the son of actress Doris Day) and Dennis Wilson of The Beach Boys, and the fabled group covered one of his songs.

Manson even recorded 13 folksy songs for an album that eventually was titled Lie: The Love and Terror Cult; it was released independently in March 1970 to help pay for his defense during his murder trial.

A petty criminal who had been in and out of jail since childhood, Manson reinvented himself during the 1967 Summer of Love as a long-haired, Christ-like guru spouting Bible verses and Beatles lyrics.

After attracting a few dozen followers from San Francisco’s Haight-Ashbury district, many of them young women, runaways or other lost souls, the Cincinnati native took them to the old Spahn Movie Ranch, where David O. Selznick’s Duel in the Sun was filmed years earlier. He had transformed the site, located along the L.A.-Ventura county line, into a commune of sex, drugs and music.

On Aug. 9, 1969, Manson sent his devotees to a home at 10050 Cielo Drive in Benedict Canyon that was being rented by Tate, 26, and her husband, director Roman Polanski. (French actress Michele Morgan once owned the house.)

The Valley of the Dolls actress, who was eight-and-a-half months pregnant, was stabbed 16 times, and an “X” was carved into her stomach. Polanski, her husband of 20 months, was in London scouting film locations.

“Even after so many years, I find myself unable to watch a spectacular sunset or visit a lovely old house or experience visual pleasure of any kind without instinctively telling myself how much she would have loved it all,” Polanski wrote in the 2004 book Sharon Tate Recollection, compiled by the actress’ sister, Debra.

Coffee heiress Abigail Folger, celebrity hairstylist Jay Sebring and two others also were stabbed to death. The next night, Manson devotees went to the house of Los Feliz grocer Leno LaBianca and his wife, Rosemary, and murdered them as well.

Authorities would learn that Manson had hoped the killings would touch off an apocalyptic race war. He apparently had gotten the idea from a twisted reading of the raucous Beatles 1968 song “Helter Skelter.”

The slayings shocked the country with their savagery. Messages like “Pigs” and a misspelled “Healter Skelter” were scrawled in the victims’ blood on their walls and doors.

The youngest member of the original Manson Family, Leslie Van Houten, a former homecoming princess from L.A., said Manson had brainwashed her and others with sex, LSD, constant readings from the Bible, repeated playing of The Beatles’ White Album and rambling lectures about triggering a revolution.

After Manson and his followers were caught, the nation got a front-page look at his piercing, demonic stare and the Nazi swastika he had carved into his forehead during his trial.

In a recent interview with James Michael Hughes, Railsback said he turned down the opportunity to play Manson but changed his mind after talking with famed director Elia Kazan, for whom he made his feature debut in The Visitors (1972). “E.K. said to me, ‘Are you crazy? This is the chance of a lifetime!’ ” the actor recalled.

Railsback told the Los Angeles Times in 2004 that he decided not to meet with Manson, choosing instead to study the Bugliosi book and watch a documentary about the madman. “I didn’t want him to manipulate me,” he said. 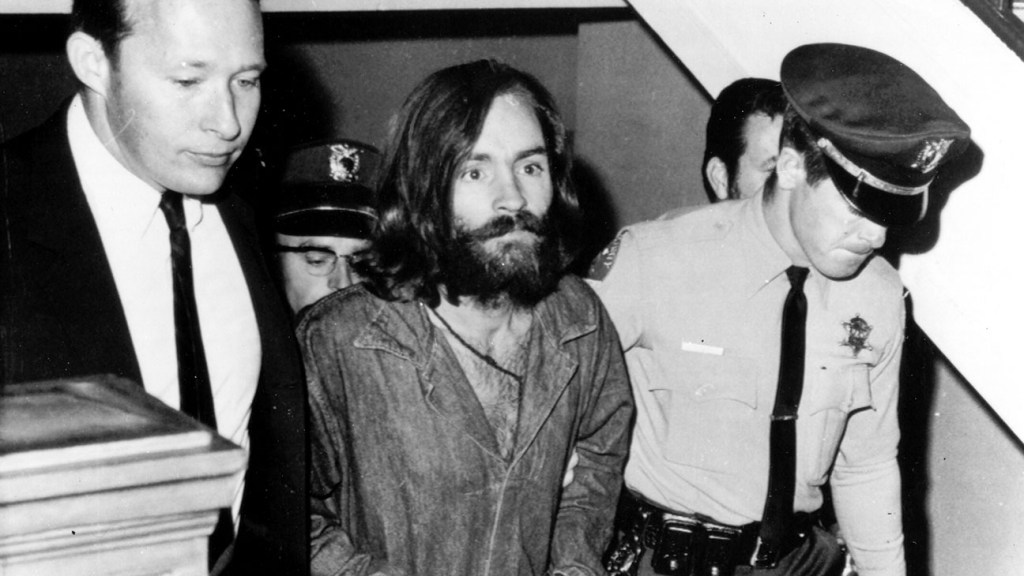 In the Times piece, Railsback recalled discussing Manson with In Cold Blood author Truman Capote, who was starring in Murder by Death, then filming inside a nearby Warner Bros. soundstage.

“I remember Capote saying this to me: ‘It’s not difficult to figure out how he got [his disciples] to follow him,’ ” he said. “These were 16-year-old kids who’d been thrown out of their homes and were looking for a father figure. In 1967, it was kind of cool to meet someone who’d come out of prison. He told them what they needed to hear.”

Following Helter Skelter, Railsback said he “was offered every psychopathic killer that Hollywood could drag out from under a rock” but turned down everything, not wanting to be typecast.

In 2004, the Bugliosi book was adapted for another CBS telefilm, this one written and directed by John Gray and starring Jeremy Davies.

Over the years, Manson became a caricature of evil and was parodied by the likes of Adam Sandler, Taran Killam, Bob Odenkirk and Trey Parker, who voiced him on a 1998 episode of South Park titled “Merry Christmas Charlie Manson!”

When he arrived in L.A., Manson became friendly with Beach Boy Wilson and Melcher, who allowed Manson to live in the home that he was renting with his then-girlfriend, actress Candice Bergen. Melcher told his mom about Manson, and Day insisted that her son vacate the premises. Later, Tate and Polanski rented the place.

“The move was no accident,” Mike Love of The Beach Boys wrote in his 2016 memoir, Good Vibrations. “Terry, Doris’ only child, was extremely close to his mom. He had told her about Manson — and about some of his scary antics, his brandishing of knives, his zombie followers — and that Manson had been to the house on Cielo, and she insisted he move out.”

In December 1968, The Beach Boys recorded “Never Learn Not to Love,” based on a song written by Manson for his followers. It was released as the B-side to the single “Bluebirds Over the Mountain,” and legend has it that Manson was irate that Wilson had altered some of the lyrics.

Lie: The Love and Terror Cult features a crazy-looking Manson on the cover in an image that evoked a photo that had fronted Life magazine four months earlier.

Guns N’ Roses also did a Manson song, “Look at Your Game, Girl,” as a hidden track on their 1993 album The Spaghetti Incident, and The Lemonheads and Crispin Glover are among those to cover Manson’s work as well.

The Associated Press contributed to this report.