In opening dialogue delivered by Christian Borle with the anxious energy of someone trying to put a cheerful spin on a derailment, Willy Wonka celebrates the marvels of milk chocolate while declaring that when a chocolatier’s product turns dark and bitter, it’s time to retire. For those adults among us who prefer our cocoa confections bittersweet and extra-dark, that intro serves as a warning that Charlie and the Chocolate Factory, the perversely charmless new musical based on the classic Roald Dahl story, will have little to offer grown-up audiences. Kids might find more to enjoy in this frantic Frankenstein’s monster of a show, but that doesn’t make it less of a misfire.

Originally staged by Sam Mendes in London in a production that opened in 2013 and ran three-and-a-half years despite lukewarm reviews, the musical has been substantially reworked for Broadway. Director Jack O’Brien has taken the reins, reuniting with his Hairspray team of composer Marc Shaiman and co-lyricist Scott Wittman. The result, however, is a fudged fusion of Dahl’s 1964 children’s book, the 1971 Gene Wilder movie, the 2005 Tim Burton remake and the West End stage prototype.

Somewhere along the way, the spirit of Dahl’s writing has gotten trampled — the nimble wordplay, the eccentric humor, the mischievous horror, the mordant social satire — replaced by an abrasive parade of garish color and ugly incidents that rarely spell fun. This choc-atrocity has got to rank as one of the most aesthetically off-putting family musicals in memory. There’s a creepiness to the show that’s not Dahl’s subversive creepiness or even Johnny Depp’s fey creepiness in the unwatchable Burton movie. In fact, when Borle’s Wonka goes out into the world incognito as a stringy-haired candy shop owner, it could almost be sex-offender-registry creepiness.

Scottish playwright David Greig’s book sticks pretty much to the original template. Charlie Bucket (played with natural verve by Ryan Foust at the performance reviewed) is an 11-year-old boy who lives in poverty with his widowed mother (Emily Padgett) and four grandparents, all of whom share the one bed in designer Mark Thompson’s imaginative junkyard-assembly house. Charlie’s passion for chocolate is fueled by the stories of Grandpa Joe (John Rubinstein), a supposedly lovable old kook who wears a saucepan for a hat. Joe once worked at Willy Wonka’s factory before it was closed due to corporate espionage. And yet despite no workers ever being seen entering or leaving, Wonka chocolate has remained in production.

A contest is announced in which the lucky holders of five golden tickets to be found in Wonka Bars will be given a tour of the mysterious factory before competing for the grand prize of a lifetime supply of Wonka confectionary. In repetitive sequences that strain to find laughs in a tired media-circus parody, the first four winners are announced via feverish TV coverage that suggests a different kind of “Hunger Games.” 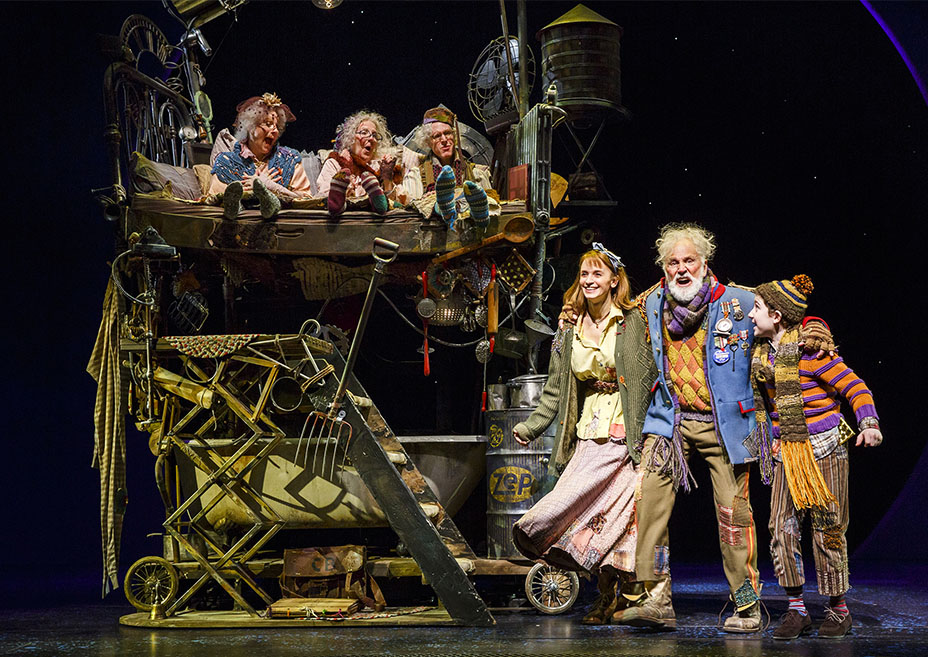 First up is Augustus Gloop (F. Michael Haynie), a Bavarian glutton on a sausage diet with a similarly ample mother (Kathy Fitzgerald); their number, “More of Him to Love,” is basically a musical fat joke with yodeling. Next comes toxic ballerina Veruca Salt (Emma Pfaeffle) and her doting papa (Ben Crawford), the most offensive Russian stereotypes since Putin, who sing the ode to monstrous entitlement, “When Veruca Says.” Third is gum-chewing California teen Violet Beauregarde (Trista Dollison) and her father (Alan H. Green), dispensing finger-snapping attitude in “Queen of Pop.”

Last and least is Mike Teavee (Michael Wartella), a loathsome brat from Idaho whose television addiction, in a pandering update, has made way for mad hacking skills, a laptop dependency and a Trumpian disdain for losers. Leading Mike’s song, “What Could Possibly Go Wrong?,” is his harried, 1950s-throwback mother, played by the absurdly over-qualified Jackie Hoffman, who looks like she’d rather be back scrubbing Joan Crawford’s floors on Feud as Mamacita.

The binding thread among these signature numbers is that they’re all terrible, displaying none of the flair for character-driven song and humorous lyrics that made the work of Shaiman and Wittman on Hairspray so infectious. Nor is there even a spark of collective energy once the obnoxious group is assembled in the factory with Charlie and Grandpa Joe, holders of the fifth ticket. Book writer Greig simply reverses the structurally monotonous intro series with an equally wearying process of elimination, by which each of the undeserving winners meets a gruesome end — drowned in fudge vats, torn limb from limb by nut-sorting squirrels, blown up by expanding fructose or shrunk via TV transmission.

Part of the reason the musical adaptation of Dahl’s Matilda was such a hit was that playwright Dennis Kelly and composer Tim Minchin honored the very British roots of the source material while sharing a sense of wonder at the magic of storytelling. The creative team here seems intent on souring every aspect of the fairy tale, polluting the comedy with such unrelenting mean-spiritedness that by the time Borle’s dyspeptically smug Wonka shrugs off the trail of kid carnage and hands over the factory keys to innocent bystander Charlie, you tremble for the poor child’s future rather than celebrate his good fortune. Oh, well, at least he’ll have the bizarrely sinister Oompa Loompas (animated as living puppets by performers on their knees) for cheap labor.

I wish I could say there was some enchantment to be found in the factory once we finally get there, but between O’Brien’s hyperactive direction and Thompson’s biliously colorful designs, there’s little to love. The first act is framed against a fire engine-red backdrop of concentric circles that evokes the Looney Tunes logo while the second unfolds in a claustrophobic box with minor variations from one factory room to the next. And some of the imagery, notably the pictures conjured when Veruca and Augustus meet their demise, is downright repugnant.

The show is most bearable when it slows down and endeavors to locate some heart, for example when Charlie’s mother sings the sweetly melancholy “If Your Father Were Here,” or when Wonka ushers Charlie into his sky-scraping glass elevator and sings “The View From Here.” These at least seem to belong to a musical narrative and are not just mirthless, episodic pastiche like the rest of the score. For nostalgia value, the musical also incorporates a handful of tunes written by Leslie Bricusse and Anthony Newley for the Wilder movie, including “Pure Imagination,” a song whose very title is out of step with the musical’s general approach of clobbering us over the head.

Spare yourself the empty calories.