Melanie Hughes-Weaver, a makeup artist who moonlights as a national equestrian competitor, grew up reading Cosmopolitan magazine, where she would marvel at fashion photographer Francesco Scavullo’s covers. Her television consumption included the Charlie’s Angels series, and when it came time for the reboot film, she was all in.

“I was drawn to [working on the recently released reboot] for a multitude of reasons,” she tells The Hollywood Reporter. “One was working with Elizabeth Banks,” adding that this is her seventh time working with the actor-director. “She really trusts my instincts and allows me to share design looks to embellish her vision and give an iconic twist to the ’70s medium.”

The film shoot spanned roughly four months and included multiple international crews and working in water tanks, rock quarries, on car chase sequences and with numerous stunt teams, trailers, hair and wig departments… “it was certainly stimulating for sure,” says Hughes-Weaver. “We went from anything edgy, natural, bareface looks to women warriors.”

Having recently completed the U.S. nationals on her horses, Hughes-Weaver opened up about working on Charlie’s Angels, an experience that involved touching up Banks’ makeup when she was asleep, in meetings with assistant directors or preparing to, well, direct; and performing makeup changes in moving vehicles, on race tracks, in ambulances and in parking lots.

What propelled your interest in performance makeup?

I didn’t have a traditional start in this business. I was an an architect major and an art minor, and at the time — I grew up in the Midwest — it wasn’t a great time for women in that field. I was searching for what I wanted to do, ended up helping design ads for a direct mail magazine. Then I’d start creating looks for these ads and working with models, and I realized it really piqued my interest. There were films being shot there in New Mexico, but I never knew anyone involved in any aspect of it. Then literally, there was a client that offered me a class in a makeup school in Los Angeles. I absolutely knew this minute I was supposed to do this. I think when you really find something that you love, it snowballs and grows and the information, you absorb it so quickly. It wasn’t a traditional start, it’s one of those things that, if you believe in yourself, and really follow that hunger and drive to truly follow and pursue that.

I do feel that when I look back, I see that it made so much sense. I was always looking at Cosmopolitan magazine, at Francesco Scavullo’s covers. I was drawn to movies like Funny Girl, The Sound of Music, The Breakfast Club, Breakfast at Tiffanys, to Edward Scissorhands, Priscilla Queen of the Desert and all of the different looks on display.

What captured your imagination about the Charlie’s Angels installment?

As a young girl, I grew up watching the series. There were a multitude of reasons that I was drawn into it — one was working with Elizabeth Banks. We’ve worked together seven times, and she’s super collaborative, smart, open to the creative process. She really trusts my gut and instincts and allows me to share design looks to embellish her vision and give an iconic twist to the ’70s medium. It was really fun to design these choices. We went from anything edgy, natural bareface looks to women warriors. It was certainly stimulating for sure.

Doing Elizabeth [Banks] was quite challenging because she was producing, writing, acting and directing, and it created quite an interesting dynamic. I had to be prepared with quick changes on set, in moving vehicles, on race tracks, in parking lots and ambulances. Sometimes even while she was asleep, or in meetings with A.D.s, if that’s what I had to do to get her ready, you know… [laughs].

Did Elizabeth direct in a full face of makeup?

Oh yes, constantly. She’d be walking around with her wig caps on, everything. There were times we’d be touching her up in a parking lot on the side of a race track in the cold wind. It was quite funny.

Can you go through some of the different looks?

Kristen Stewart’s character was the edgy, understated beauty with a wicked humor. Her makeup ranged from raw and natural to a bold look with patent leather liner. Stacey would create looks that varied between bold red lips to disco glam that was choreographed to dance or to fight. They did it all. 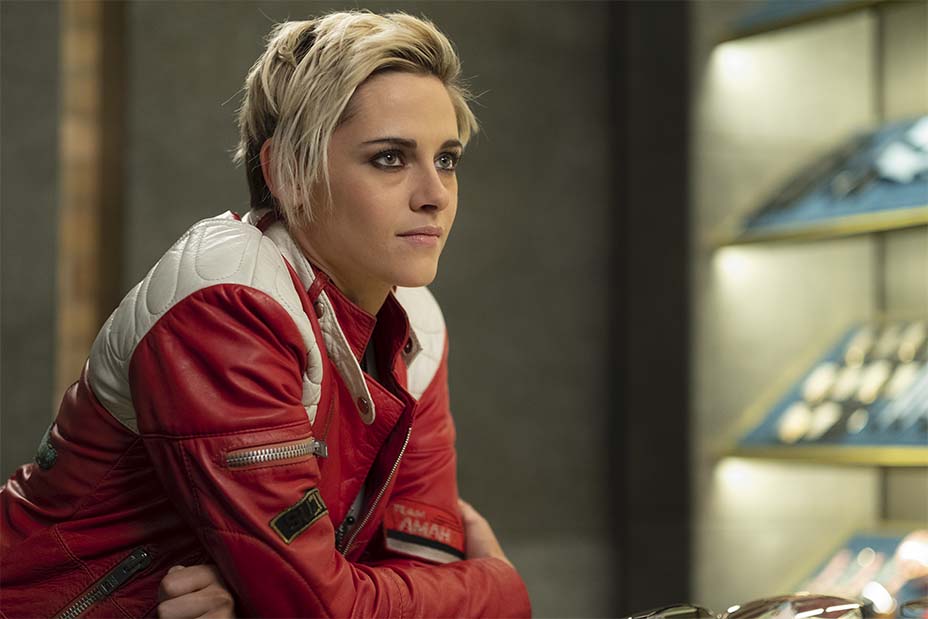 For Ella Balinska, my team makeup artist Maha created twelve different looks for her. Those varied from soft tones to her signature smoky brown eye, with defined liner and brows, and a soft beige lip — that was kind of her warrior mode. She could go from that to peacock-inspired, high-shine shadows, and that was one of my favorite looks for Ella that we created. 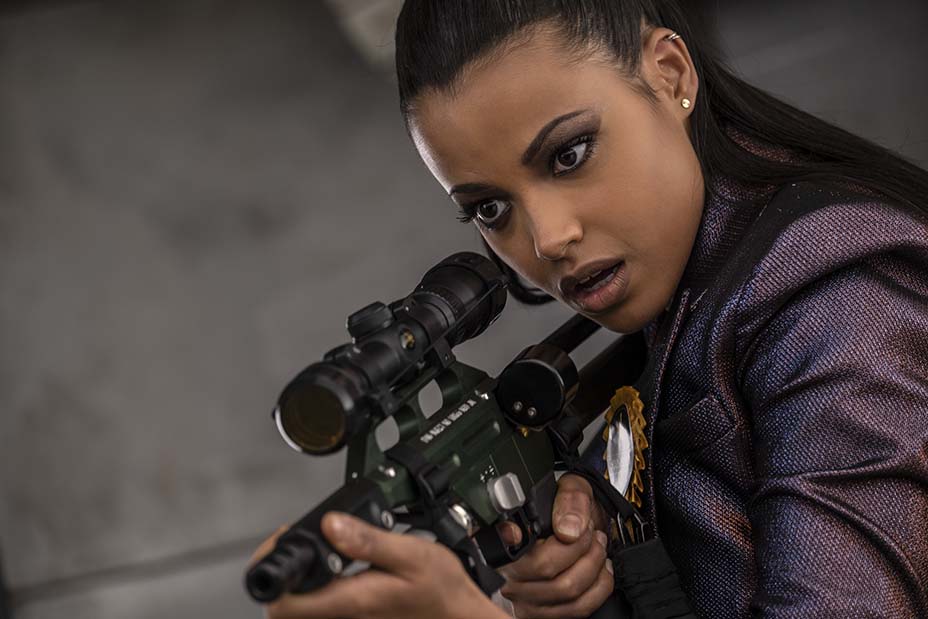 Naomi Scott was the brainiac — quirky, with comedic tones, a lot to play with. We kept her with an organic business look that we could embellish as she transformed. She has beautiful skin and a gorgeous facial structure, so we concentrated on her eyes. She, too, would have a smokey undertone that we accentuated with pops of color to draw you in, intensifying her as she went.

What influences did you draw upon?

I really tried to stay true to the aspect of what we’re embracing with women today: their own strengths and authenticity. We went through each character in development, whether it was Kristen Stewart’s makeup artist Stacey Panepinto, to the looks for Naomi Scott and Ella Balinska, and obviously Elizabeth — we tried to really go to the baseline of each character and what their qualities and strengths were, to build that up in an authentic way. Obviously you go into disguises and beauty along with that, [but] we tried to display their vulnerabilities/strengths through their own natural looks. Sometimes those looks were very raw and bare, which are bold choices on film.

Is there a look in the film that presented a unique challenge that you had to work through?

There was a choice where we had to create three of the girls in an almost doppelganger-like [way], with three different skin tones, and try to present them visually as close as possible. It was really quite fun, altering their skin tones, but still allowing themselves to still look like —themselves, so that it would connect on film. It was a lot of makeup tests with the perfect red lipstick and the hair/wig departments, designing the wigs to all look alike.

What resonated with you about the film?

This might sound too corny for you, but to realize there’s a hero in each and every one of us, is a powerful theme that was played out throughout the storyline. I think a unification of hearts and souls being in alignment is pretty exciting for me, and if I can be a part of that, and we can have some laughs along the way, why wouldn’t we?

What drives you to enhance characters and elevate stories through makeup?

I love the visual and artistic impact of assisting a director or actor in creating their vision. I think it’s very important for the actors as well, in discovering their character. I’m very emotionally drawn to characters that I watch on film, and whether it’s the small altering of a liner on an eye or contouring or aging or breaking someone down into a raw, vulnerable state, that draws an audience in to where you’re really a part of the scene instead of just noticing what’s happening to them — that really stimulates me.

Is there an aspect of the makeup industry that needs more visibility?

I think something that does need to be a little bit more visible is — when movies come out, you see the end process, the beautiful work that was created, but there would not be a film without the film crews. They leave their lives, their families, and they are there from sun up till the wee hours of the morning putting their best foot forward. Most people who really stand behind this business; you have to really love it to do it well. I think everyone behind the camera deserves recognition for their hard work. There are amazingly talented individuals, from every corner of the world, and that in itself is an artistic unification and something I’m drawn to: collaborating with camera, props, costume [etc]. It’s such an unusual occupation, and visualizing that all starts with words on a page.

If you go just to the aspect of makeup artists, I really do think that in our craft, setting our intention and our integrity behind what we do, as well as our artistic [abilities], to create the best projects and support each other — is very important.

'Charlie's Angels': What the Critics Are Saying