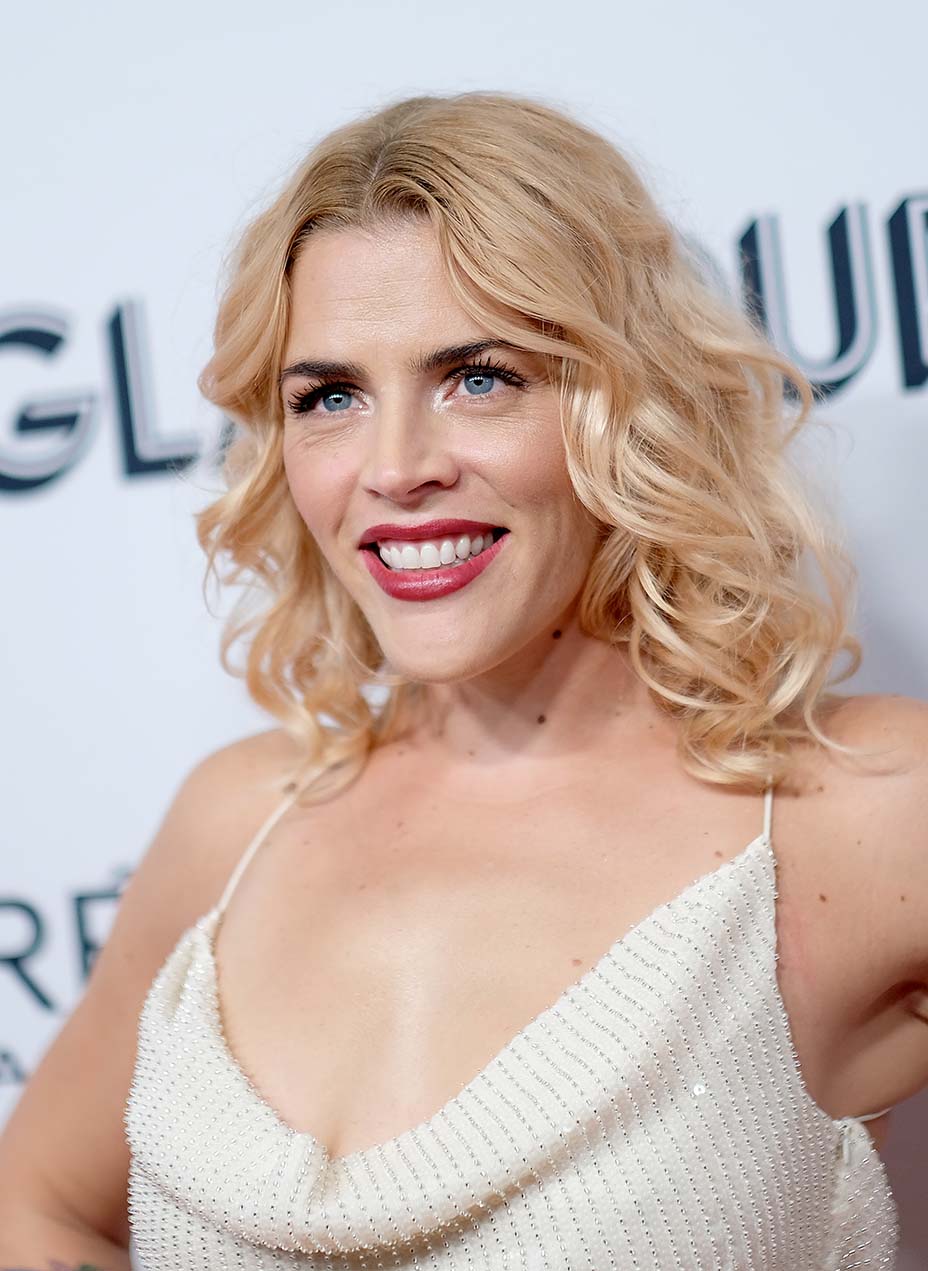 Host Busy Philipps tackled her opening monologue with honesty, conviction, gratitude and humor (four traits that set the tone for the evening), which a tearful Theron would later describe as “powerful female alchemy.” Philipps said: “Because of women like you, I stand here tonight with more hope than I have ever had in my life.” This year, the actress prompted millions of women to share their abortion stories, using the hashtag #YouKnowMe, after sharing her own during her talk show Busy Tonight. “Because we are no longer observers in the great work of other great women; we are the great women doing the great work to make change, all of us together.” 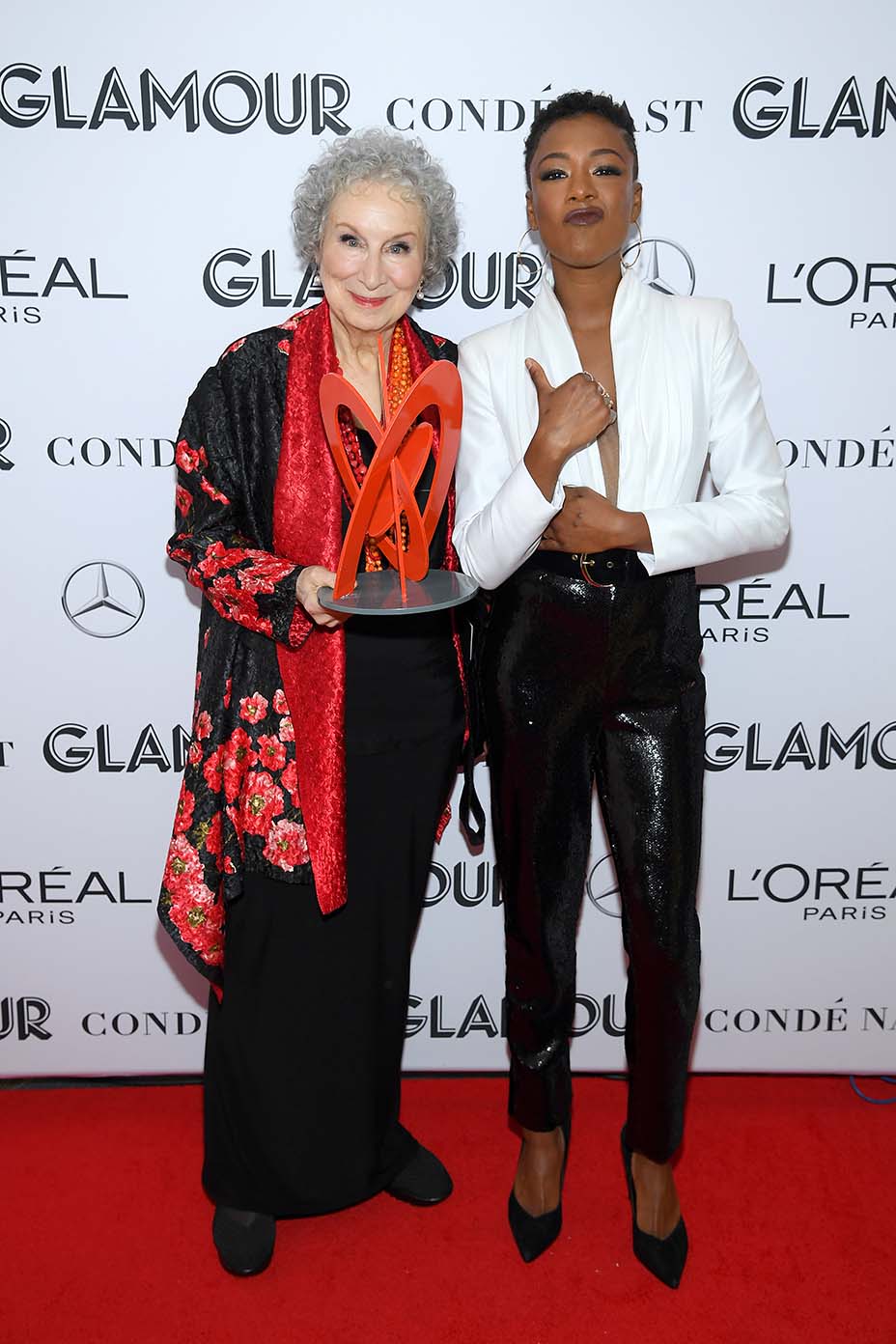 In the face of what Philipps called “terrifying reproductive rights legislation,” honoree Margaret Atwood’s The Handmaid’s Tale has grown increasingly resonant. “What’s so powerful and awe-inspiring about Margaret’s work (not just The Handmaid’s Tale and her brand-new sequel, The Testaments, but her entire body of brilliant, subversive, multi-genre writing) is that she creates art that elicits real change in our society,” Samira Wiley, who plays Moira on the dystopian novel’s television adaption by Bruce Miller, said when presenting the author her award. “She makes you look; she makes you terrified, particularly about reproductive rights, and then she makes you brave.…I’m certain that we all dream bigger because of Margaret Atwood.”

One of the night’s biggest laughs unexpectedly came from Atwood, who upon accepting her award with the wisdom and candor for which she is known, shared that at nearly 80, she donned her first pair of false eyelashes for the occasion. “It’s encouraging for someone over 70 to still be considered glamorous.” 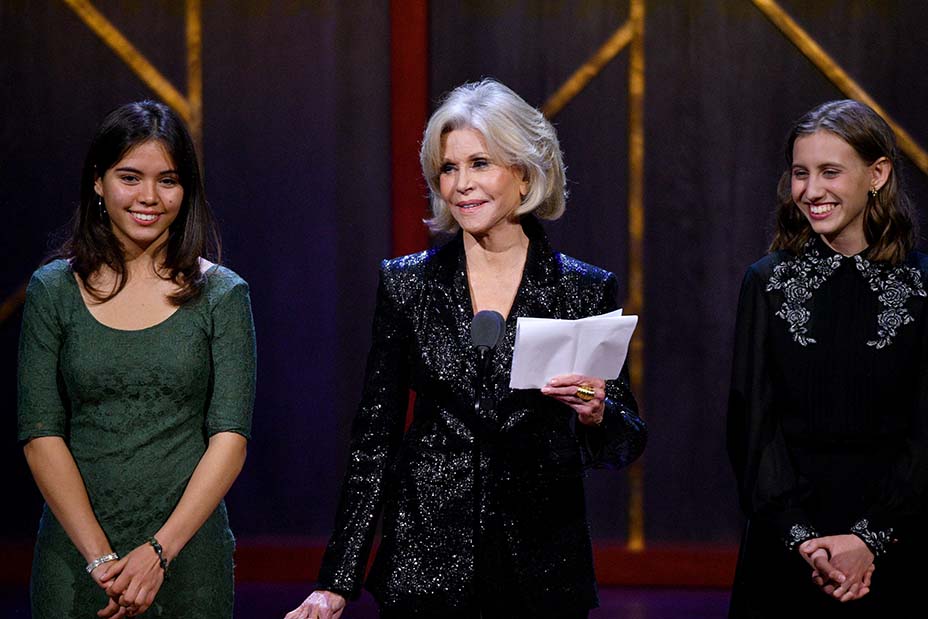 Putting that sentiment to bed and then some was Jane Fonda, who at age 81 is making headlines for her unabashed climate activism, protests and consequent multiple arrests. “I have not met Greta Thunberg, but Greta Thunberg has changed my life,” Fonda said when honoring the intrepid 16-year-old Swedish environmental activist who could not attend the event. Inspired by Thunberg’s steadfast nature and truth-telling in the face of the inevitable climate catastrophe, Fonda stepped out of her comfort zone and moved to Washington, D.C. Reading Thunberg’s acceptance speech on her behalf, Fonda said, “If a Swedish teenage science nerd who has ‘shop stop,’ refuses to fly and has never worn makeup or been to a hairdresser can be chosen a woman of the year by one of the biggest fashion magazines in the world, then I think almost nothing is impossible.” 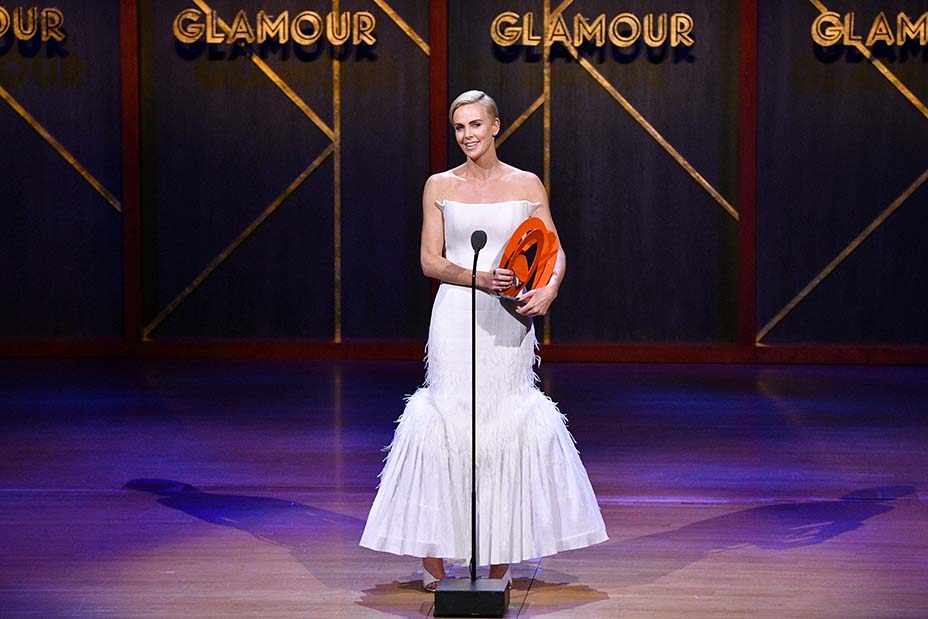 Theron, too, praised Thunberg’s work, as well as the younger generation’s commitment to change at large. “When I was 16, I was begging my mom to go on a date. Greta is trying to convince the world not to let our earth go up in flames. Yara is helping people vote.” Though, of course, Theron’s rebellious nature is not to be underestimated, said her Bombshell co-star Kate McKinnon. When introducing Theron — a role which she likened to a bridge troll being asked to introduce the queen — McKinnon stated that Theron is a “person whose real-life badass-ness makes her character from Mad Max: Fury Road look lazy and selfish, a person so grand that when you meet her it only feels right to get on the floor, but who is so nice and normal that you end up just kind of doing a little curtsy.” 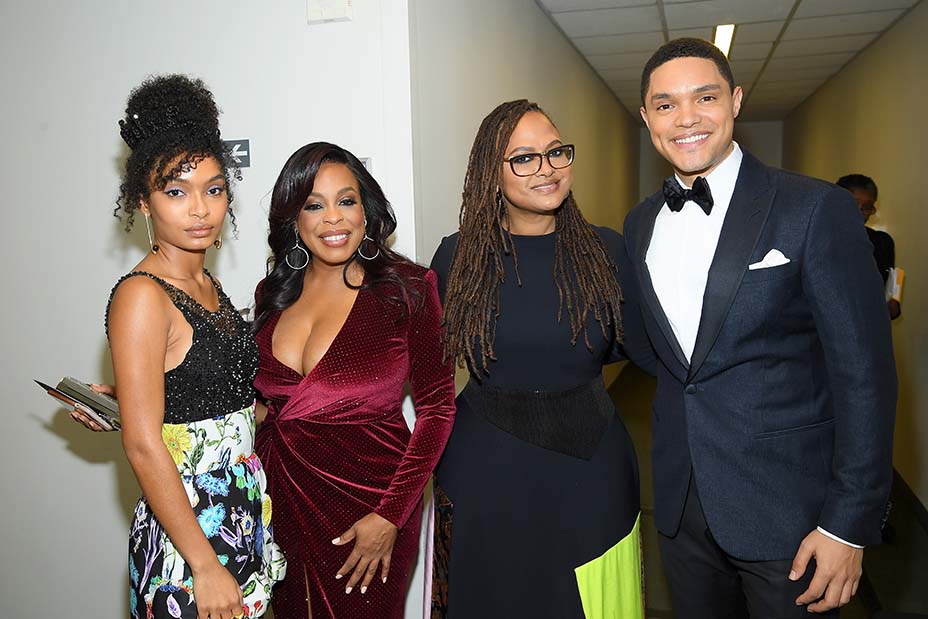 Theron was one of many who praised rising star actress-producer and Harvard University student Shahidi, introduced by Trevor Noah, who called the 19-year-old “100 years wise.” Accepting her award, Shahidi (who launched the Eighteen x 18 platform to encourage the younger generation to be politically active) said, “To be a woman is to be an abolitionist. To be a woman is to understand the power of our ‘yes, of course,’ but to understand how groundbreaking and system-shaking it is to say ‘no.’” 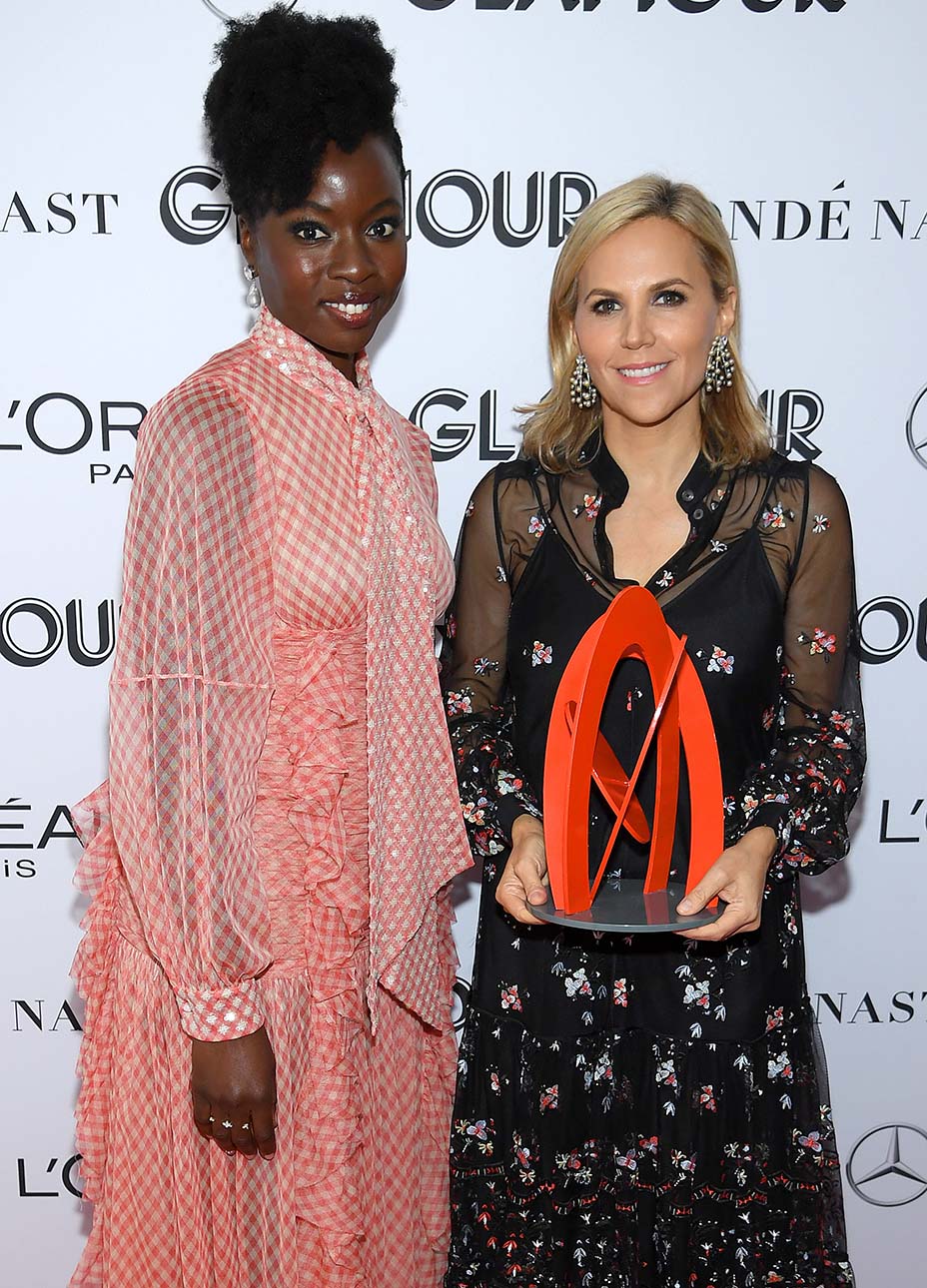 For Burch (who shared that her business comprises 85 percent women) and Ava DuVernay (whose Queen Sugar only features female directors and whose new series Cherish the Day achieves full gender parity), change is saying “no” to gender and pay inequity, as well as to racial injustice. “So much of our conversation as women is about the table needing a chair for us, the glass ceiling we must break, the door we’re going to go through and hold open for others,” said DuVernay. “I believe in all of that, but I also believe in making your own doors, disrupting all the systems that are built in such a way that inclusion is even needed in the first place.”