Thomas Keller, the chef behind iconic French Laundry and revered Per Se, refers to his new restaurant, TAK (Thomas Aloysius Keller) Room, as casual, but it’s a relative term. Lest you think you can stroll right in, there are two hostesses guarding a winding staircase that leads to a room adorned with polished walnut and terrazzo. Every table is a spacious banquette, and walls are festooned with Robert Mapplethorpe and Slim Aarons photographs alongside paintings by the likes of Gianna Commito — a collection curated in collaboration with UTA Fine Arts (Keller, who has consulted on films like Ratatouille, is repped by UTA). Music emits from a Steinway baby grand and the backdrop is a panorama of the Hudson River and Thomas Heatherwick’s sculpture, known as the Vessel.

Where Matty Matheson, the Only Real Chef on 'The Bear,' Eats in Toronto

“You can see New Jersey,” offers the chef. TAK Room is one of the top attractions at Hudson Yards, the $25 billion, 28-acre mini city erected by The Related Cos. on midtown Manhattan’s Far West Side (where WarnerMedia will relocate this year). The project has been met with a mix of awe and vicious criticism, targeting especially its one-percenter vibe. The Vessel in particular has taken a shellacking.

Keller thinks New Yorkers will come around. “Most of the criticism was before anybody experienced [the Vessel] — like critiquing a movie before watching it,” he says. “You have to give credit to the immense vision and achievement; it will have longevity beyond us.” TAK Room certainly has a timeless feel. “Don Draper could be sitting here with his girlfriend,” says the chef. “It’s historic like Chasens or Perino’s in L.A.” And the menu is in step with that mood: Steaks share billing with such classics as lobster thermidor ($85) and fettucine Alfredo ($46). “We are doing the avocado Louis that I used to do for Graydon Carter’s Vanity Fair party; we wanted to do something vegetarian, so we took the crabmeat away and added pickles.” 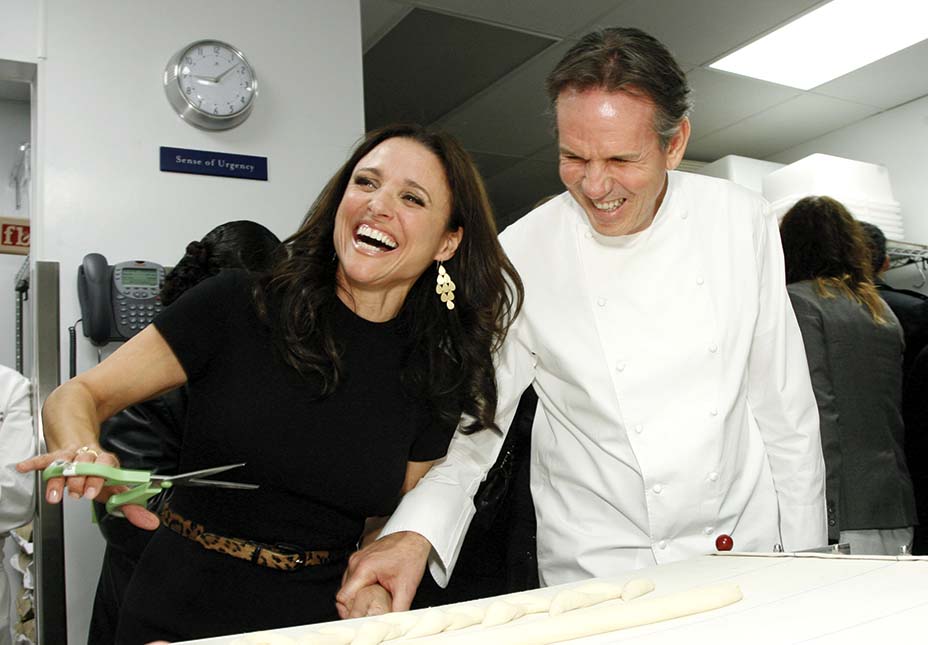 Old-world flair is on display; think champagne carts and tableside preparations. “Our most popular dishes so far are the Caesar salad — people enjoy the show and interaction — and the Dover sole, a classic diners don’t get tired of,” says Keller, who’s partial to the New York strip for two ($160), a combo of Japanese Wagyu and Black Angus from Snake River Farms. “It took us years to find that,” he notes.

While the prices, like $85 for filet mignon, don’t conjure casual, Keller maintains that the cost is reflective of quality, not pretention. “We are looking for exceptional ingredients, which are rare and costly,” he explains. “You can get factory-farmed beef at another restaurant, but we support our farmers and fishermen and foragers in what they are trying to do.”

Since its March 15 opening, TAK Room’s hard-to-score tables have seen the likes of Jada Pinkett Smith, Martha Stewart, Gigi Hadid, Gayle King, Ryan Seacrest, John McEnroe, Hannah Bronfman and Arianna Huffington. Keller always had a “no autograph” rule until the night Michael Jordan walked into French Laundry. “The staff said, ‘You have to let us ask him,’ so I picked a plate out and he signed it,” the chef recalls. “It started a tradition.”

Now Susan Sarandon may have started a new one. “She kissed a plate last week,” Keller says with a smile, “and left her lipstick print on it.”