Continue to The Hollywood Reporter SKIP AD
You will be redirected back to your article in seconds
Skip to main content
June 8, 2017 1:37pm
Logo text

If you need to locate Chelsea Handler, don’t expect to discover the Netflix host sitting cross-legged on her bed, zoning out in front of the television.

“I’m at a place in my life where I’m, like, wow, I want to do everything I can to make sure that I’m responsible so that I don’t ever look back at this time and think, ‘Why the f— was I sitting there on my bed? Why didn’t I do anything?'” she said Wednesday night from the podium during the Brady Bear Awards at NeueHouse Hollywood, where she received top honors for gun control advocacy. “It’s an opportunity for all of us to do something that we’re proud of. I’m not married, I don’t have kids, I don’t owe anybody anything. I finally am at a place in my life where I can stop bitching and moaning for myself and I can start bitching and moaning for other people. I feel really good about that; if that’s what it takes to get out of bed, that’s what it takes.”

Speakers and guests at the annual gala provided a few more reasons, with key moments delivered by Dan Gross, president of the Brady Center to Prevent Gun Violence, and Los Angeles Mayor Eric Garcetti. The event serves as one of the Brady Campaign’s chief fundraising outings and is named in honor of Jim “Bear” Brady, the former White House Press Secretary who served under President Ronald Reagan. Brady was wounded by gunman John W. Hinckley Jr. on March 30, 1981, in an assassination attempt on Reagan’s life.

Kristen Stewart co-chaired the event along with the Brady Campaign’s Kevin Quinn, and she sat through the whole program, as did guests Will Ferrell and his wife Viveca (who facilitated the live auction) and Master of None actress Lena Waithe. The Voice winner Alisan Porter performed two songs during the evening, including her new track “Deep Water” and a cover of “Desperado.”

Handler — dressed in a strapless Romona Keveža Collection cocktail dress made of metallic gold thread linen — accepted her award from January Jones. The actress praised Handler as a “triple threat,” someone who is beautiful, smart and “f—ing funny.” But its activism that inspires Jones. “Between hit shows, comedy tours and best-selling books, I don’t know how she finds time to also be an inspiring activist,” Jones noted. “Chelsea does more than make us laugh, she makes us think.” 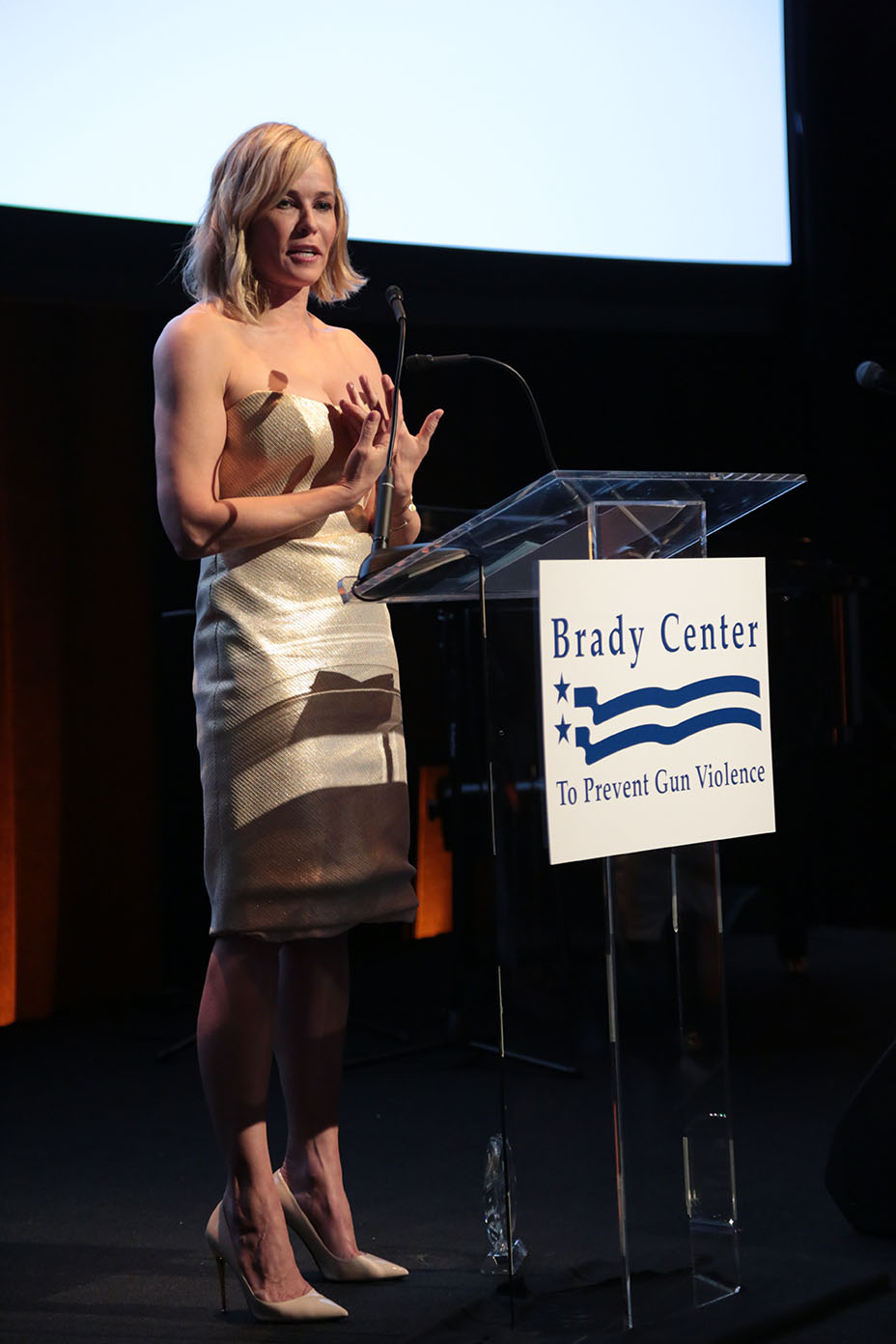 Rather than urge guests to ponder politics on Wednesday night, though, Handler called upon them to get busy. “We have a moment right now in the history of time that we can really define ourselves as men, as women, as children, as minorities, as everybody. I want to fight for people. I want to do something that makes a difference. I have never been more galvanized in my entire life,” said Handler, who shared the stage with the night’s only other honoree, law firm Hogan Lovells, which took home the Legal Advocate Award. “This is something that we can never not participate in. You f—ing show up. Every single night. Don’t ever give up.”

It was a sentiment shared by three special Brady Bear Awards guests: Angel Santiago, Angel Cologne and Luis Roldan. The trio opened the night’s program standing next to one another in the spotlight — the only light in the whole room, which created a fittingly dramatic moment. “Almost a year ago we were involved in the biggest massacre in U.S. history at Pulse Nightclub, where a man took 49 beautiful souls away from us. We were the lucky ones. We survived,” explained Cologne. Added Santiago: “Ever since that night, we’ve dedicated our lives to making sure that something like Pulse doesn’t happen again.” 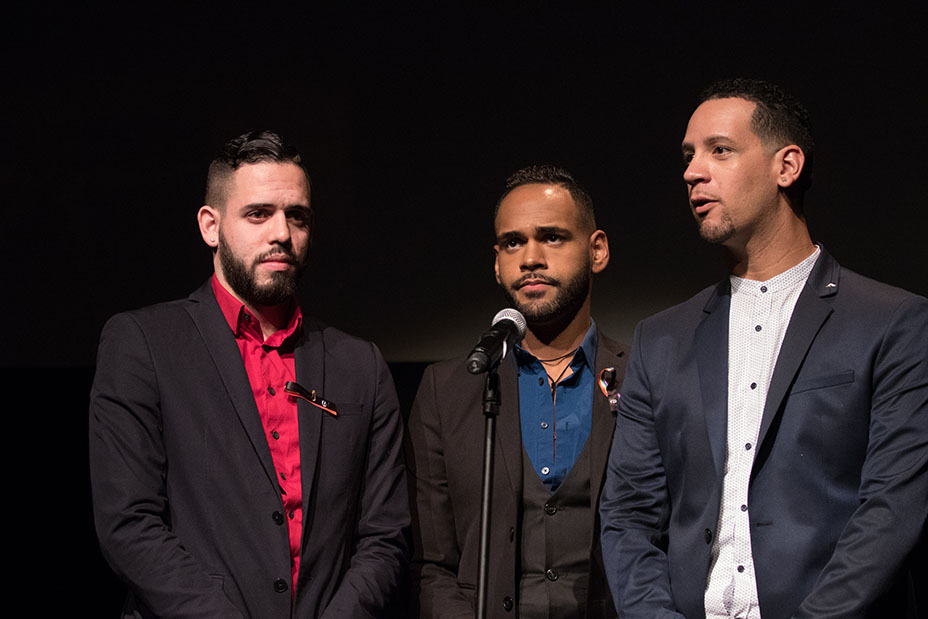 The Brady Bear Awards always spotlight personal stories behind such gun-related tragedies as Pulse, which took place on June 12, 2016. Also sharing a story was Courtney Hotaling, who lost her 2-year-old son, Benjamin, when he accidentally shot himself with his father’s gun. The stories always stand out to Garcetti.

“Every single time I come to Brady Center’s dinner, I hear those stories that remind me that this isn’t a public policy issue. This isn’t about numbers and statistics. It’s about narratives. It’s about flesh and blood. It’s about love that we’ve felt, love that we’ve lost, and love that we seek to renew,” the mayor said during his remarks. Although he spoke before Handler, Garcetti also mentioned the bedroom.

“I know a lot of people these days want to yell at the television or curl up in a ball in their bedroom. They are pissed off, they’re pessimistic or even worse — paralyzed,” he said. “We see somebody in the White House who thinks that even background checks on folks with mental health challenges is somehow an assault on our constitution. Each day we are called on to react, which is taking us off our game on what we must to do act.” 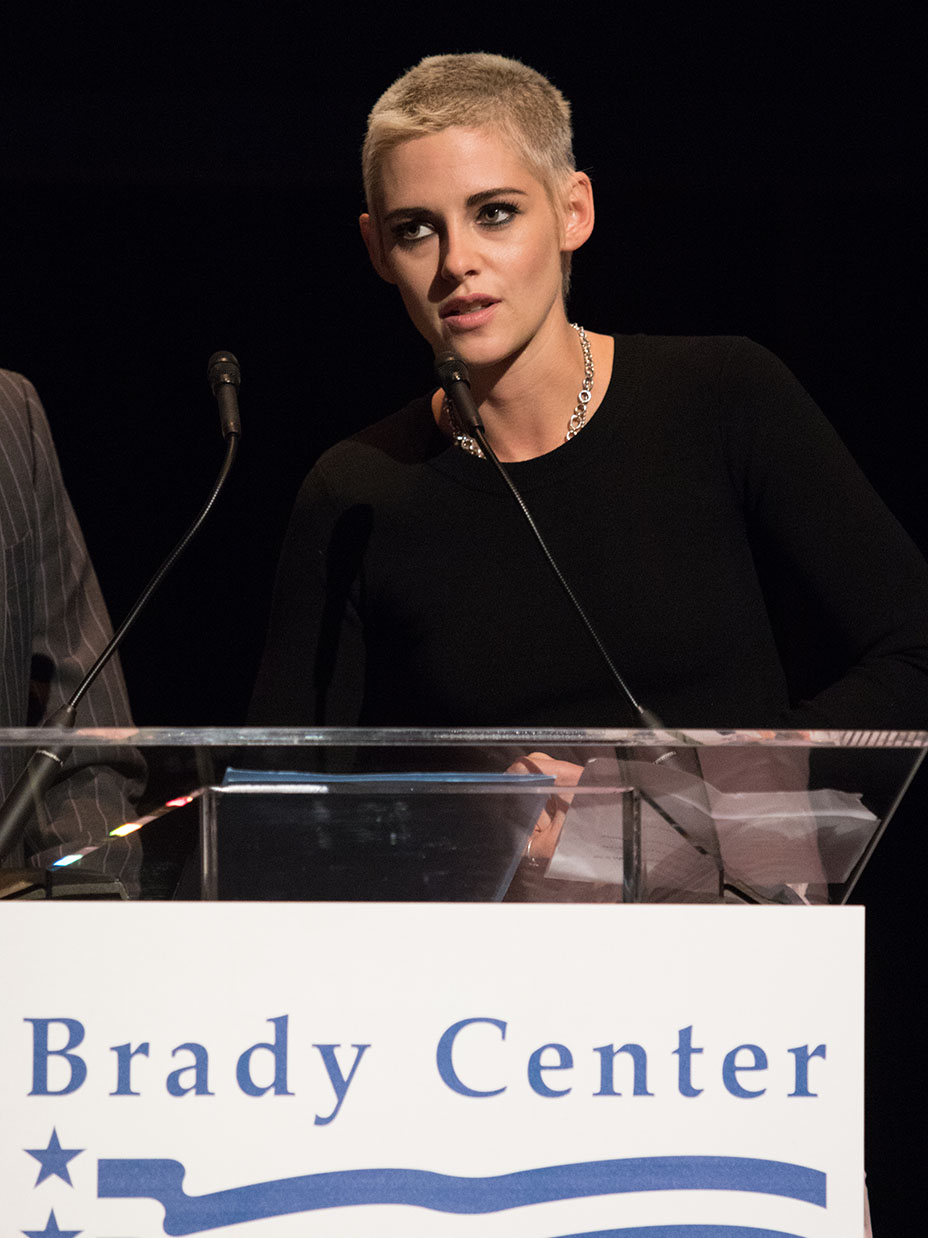 The mayor then revealed that the city is partnering with the Brady Center on some action of their own. “We are opening up a gun intelligence center to track the weapons that are used on the city of Los Angeles’ streets to take lives, to commit crimes and to know where they are coming from and what we can do to stop the scourge of violence,” he continued. “My simple message is, again, get off the floor and start to act. Don’t just play defense.”

Like Garcetti, Gross also mentioned the current administration. And not in a positive way. (President Donald Trump is known to have received more funds for his campaign from the NRA than any other group.)

“We have a president that could not only care less about making America safer, but he actually seems hell bent on making it more dangerous, one awful tweet at a time. So there, I’ve acknowledged that,” Gross said to applause. “Now, what I’d like to do is move on because folks, we’ve got way to much work to do and way too much momentum on our side to get distracted. We can’t let ourselves be defined by what we’re against. We’ve got way too many important things to fight for.” 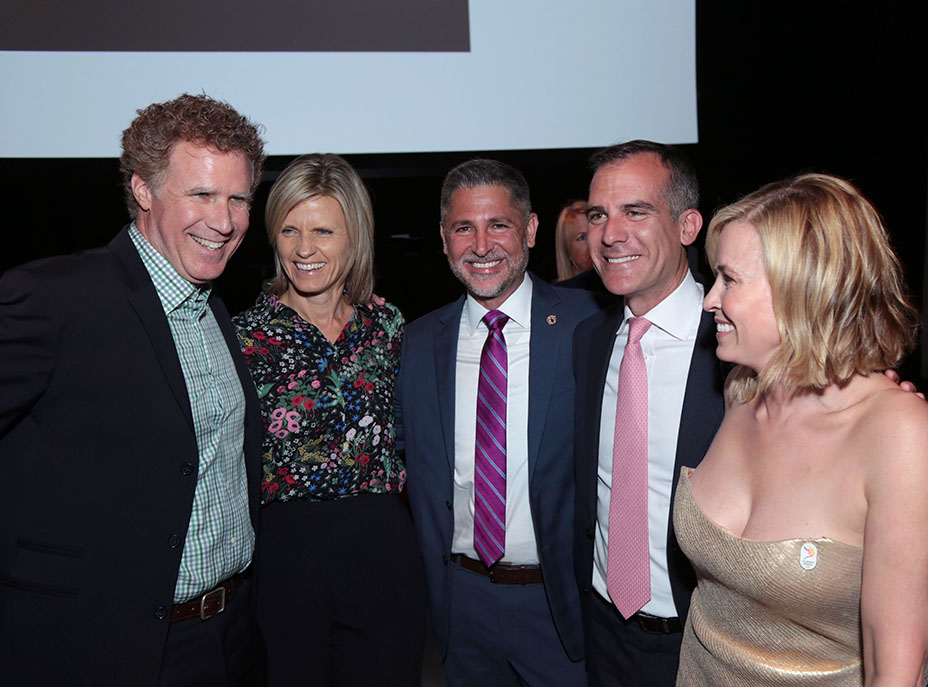 Gross then went on to list the Brady Campaign’s bold goals of cutting gun deaths in half by 2025 by going after “bad apple” gun dealers and targeting elected officials by “holding them accountable” for their roles in policy-making that has a negative impact on the number of guns on America’s streets. He then introduced a new campaign that he wanted to pitch to the attendees.

Gross called it the area where Hollywood “can make the biggest difference” by helping the Brady Campaign thwart the “big lie that the gun industry has perpetuated on America for too long,” which is that “guns make homes safer.”

He continued: “Today, a staggering 63% of American people believe that their family is safer with a gun in the home, and it’s just not true. Every day, people across the country are dying as a result. Eight kids are shot unintentionally, just by accident, every single day.”

How Hollywood can help is by influencing culture, whether by social media or entertainment content. Gross listed the ways insiders could help promote the Brady Campaign’s message, such as donating air time or production resources, or by having content creators integrate the message into movies and TV shows.

He concluded: “There’s nothing more important to our vision of a safer future than the success of this campaign to change social norms.”

Though he didn’t say it, that vision most likely doesn’t include Handler — or anyone else — sitting on their beds. 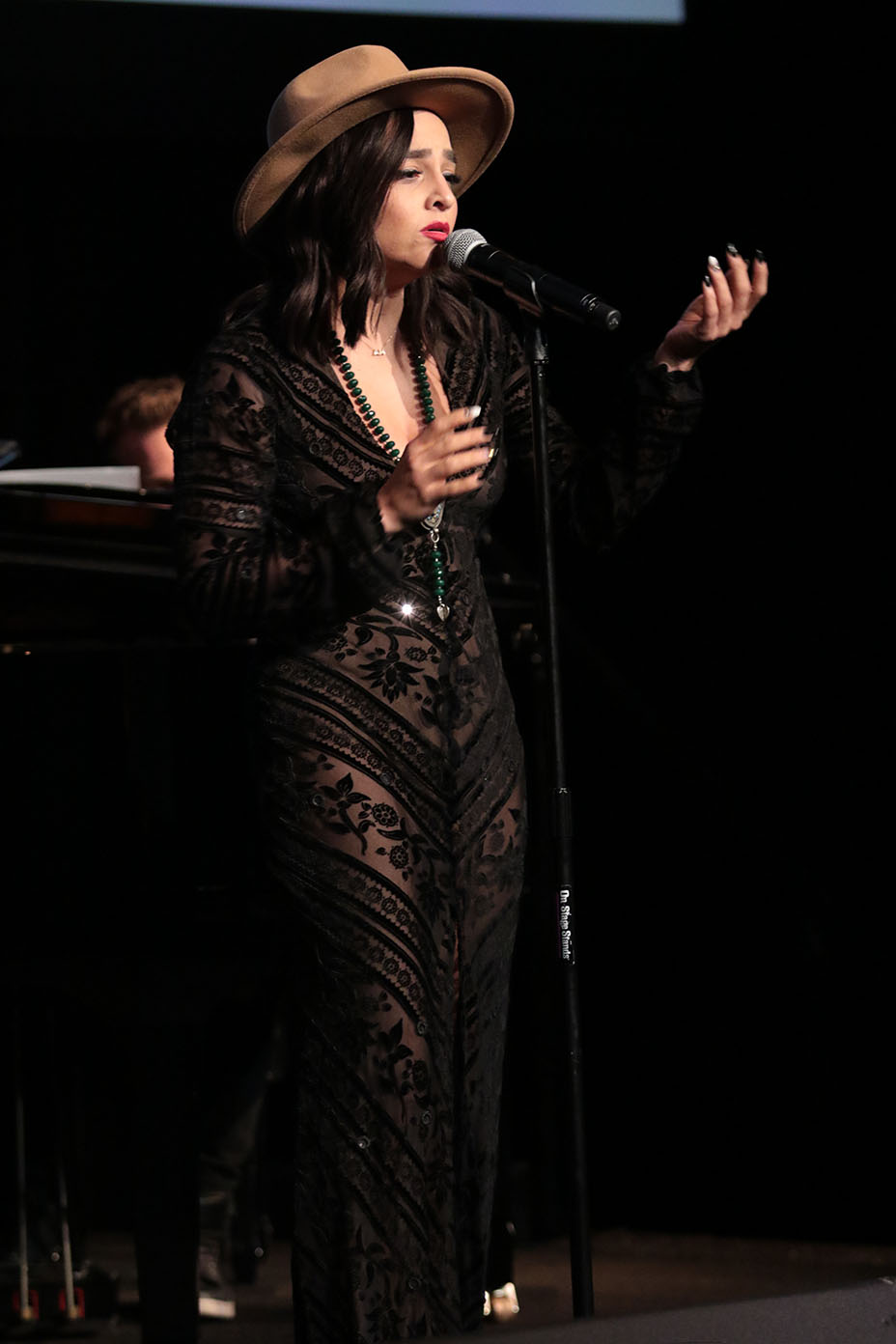