Continue to The Hollywood Reporter SKIP AD
You will be redirected back to your article in seconds
Skip to main content
August 21, 2020 8:33am

Director Richard Tanne was so moved after reading Krystal Sutherland’s 2016 novel Chemical Hearts that he immediately began writing a script to adapt it.

“I didn’t know really anything about it, except that it moved me enough to finish it before we even had the rights,” Tanne tells The Hollywood Reporter.

The director was sent the book by Riverdale star Lili Reinhart who was looking to adapt the YA story. After meeting with the actress in Vancouver, while she was shooting for the CW series, the two bonded over their shared visions for a potential film, eager to bring in elements from other works such as the color palette of Alfred Hitchcock’s Vertigo or the naturalistic performances from Gus van Sant films.

“It wasn’t until we sent my script to Krystal Sutherland that she granted me and Lili the rights to option the book,” Tanne tells THR, adding that a month later Amazon greenlit the project. Reinhart stars and executive produces the film alongside Tanne.

Sutherland’s book (Penguin Books) tells the story of Henry Page (played by Euphoria’s Austin Abrams) growing infatuated with new student Grace Town (played by Reinhart), who limps around campus with a cane. After Henry and Grace are recruited to join their high school’s newspaper as co-editor-in-chiefs, Henry becomes intrigued with Grace and her mysterious life. Having never fallen in love before, Henry begins to grow feelings for Grace but soon learns there’s a heartbreak and tragedy she fights to truly confront.

“I had no idea how the star of a teen CW drama is going to respond to this stuff, and she was totally into it and shared a similar vision. And from that point forward, [she] really backed me as a filmmaker and backed my vision. That means quite a bit when the star of your movie is behind you,” he says of joining forces with Reinhart.

With a 25-day shooting schedule — the film was shot in summer 2019 — Tanne and Reinhart had to film while accommodating Reinhart’s Riverdale‘s filming obligations. “We only had Lili for half of that. Now, Lili is in almost every scene of the movie … it was very difficult to shoot all of her material in just 15 days. But we managed to do it,” he says, praising the actors for their commitment to rehearsals in order to shoot quickly.

Already used to filming in a tight time frame — Tanne filmed his 2015 feature debut Southside With You in only 17 days — the director was not only committed to giving Sutherland’s novel justice but admits he felt a personal connection with the story as it almost paralleled his own high school life.

“There were a lot of superficial similarities between myself and Henry and to a certain degree myself and Grace’s attitude and perspective. I was the editor-in-chief of the school newspaper. I had a similar kind of dynamic where there was this girl, she was a transfer student and I fell head over heels for her,” he tells THR, adding that his first heartbreak experience had a “profound impact” that continued to resonate years later.

“When I read the book, I thought, ‘well this is an opportunity to tell a story about my feelings in high school.’ Even though it’s not exactly my story, I can tell my story through this story,” he says. 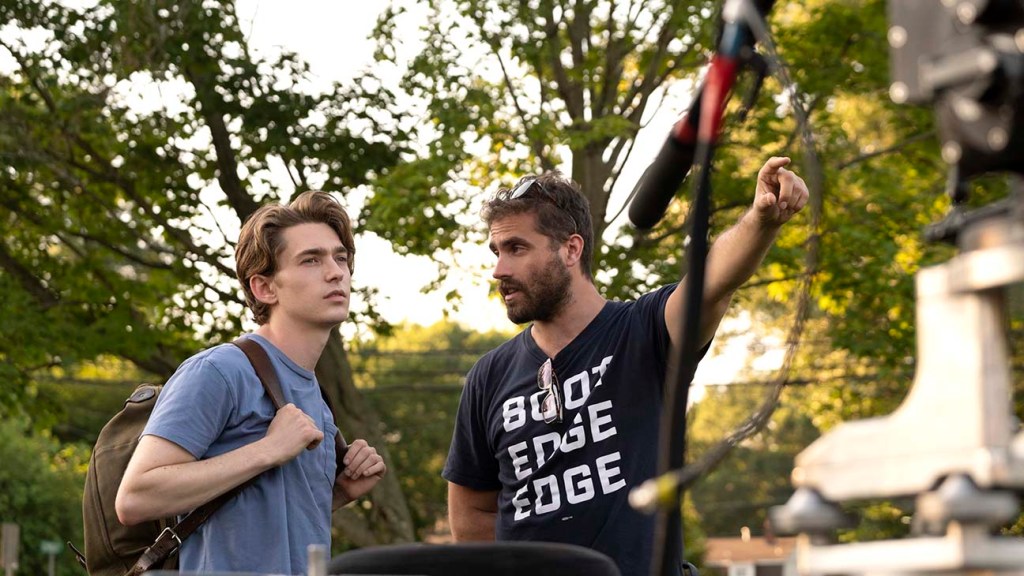 Chemical Hearts marks Tanne’s first film since his Sundance breakout Southside With You, which told the story of Barack and Michelle Obama’s first date. Bringing Sutherland’s book to life was also Tanne’s first endeavor adapting a book to screen, but it was a project he found “refreshing” as he says he formed a “model relationship” with Sutherland.

“She decided that, from the very beginning, a film is an entirely separate piece of art [and] it will share DNA with the book. But she trusted me after reading the script and she entrusted me with her babies, with her characters,” Tanne says. The author visited the set after Tanne insisted she watch them film the book’s iconic fish pond scene that Tanne describes as the “centerpiece and the heart and soul of the movie.” Tanne adds, “She’s just been encouraging and just so kind and generous in taking a chance on me and Lili to bring this home.”

On the surface, it can be surmised the film joins the lineup of previous YA adaptations centered on love a la Fault in Our Stars, but Tanne assures Chemical Hearts isn’t a niche teen romance film viewers are used to seeing. Instead, expect a darker story unafraid to explore a mosaic of “teen emotions” in a realistic way.

“If you see promotions for the movie, you’re probably going to get the sense that it’s a quote unquote ‘YA romance’ and we may also get a whiff of coming-of-age and mystery but what it actually is and where it comes from is the feelings of existential dread, tragedy, melancholy and the overwhelming sweep of teen emotions. That is the core of the place that Krystal wrote from and the place that I wrote from,” Tanne explains.

He also notes that Sutherland’s story was written as a “self-proclaimed anti-romance” and both the book and film are a “deliberate attempt to subvert YA tropes.” Though unaware of what the “expectations are” for a YA-genre film, Tanne is grateful to be able to “slip a very personal movie through the cracks” where he could “dig deeper” on the story and characters. “If it’s different than your average teen movie, it’s only because it’s ever trying to be itself,” he explains.

While he notes it’s left to viewer interpretation as to whether Henry and Grace’s tragically beautiful relationship depicts a true love story, Tanne admits he viewed their dynamic as anything but. Instead, Chemical Hearts chronicles a story of two individual journeys crossing paths and confronting the compilation of emotions that come with being young adults. “I don’t think that what Henry feels for Grace is real. I think he believes it’s real love and that’s the trouble that he gets himself into… I wanted to be true to the book and stick to Henry’s perspective. But I wanted to make sure that even from Henry’s perspective, it’s also Grace’s story. It’s clear that she has her own agency.” 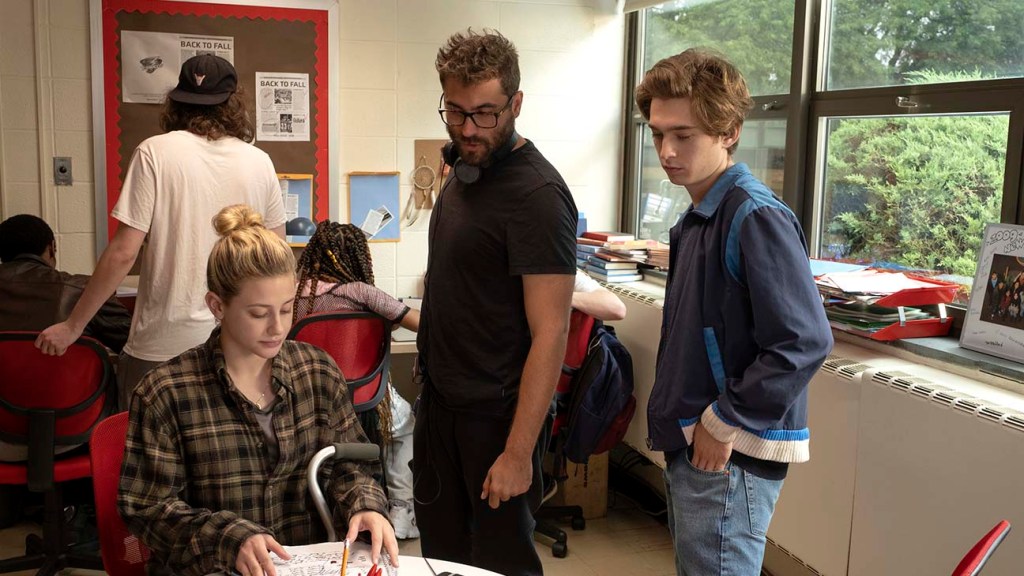 Aware that Grace endures both physical and mental struggles, Tanne and Reinhart worked to find a delicate balance of showing the grief she fights to overcome while also trying to find herself as a young woman. Tanne says he and Reinhart worked with a disability consultant on set that would help the actress properly portray the leg injury her character suffered from as a result of an accident, whether it be exemplifying how to walk or sit. “We wanted to make sure that we were doing justice to it, and Lili got to ask her about her state of mind and everything relating to her experiences,” Tanne says, noting “you wouldn’t see Lili without a cane” on camera and behind the scenes. As for portraying Grace’s emotional state, Tanne says he and Reinhart “had long conversations” about their own mental health battles they’ve endured throughout their lives.

Chemical Hearts will mark the first-ever Amazon Original designed to go straight to their platform as the novel coronavirus continues. Though he quips gearing up Chemical Heart‘s release “only takes up a very small portion” of his time, Tanne says he’s spent his time in quarantine writing. “I’ve been doing it my entire life and sitting alone in a room, other than occasionally seeing my fiancé and my dog walk by, that’s something that I’m very comfortable doing.”

Ready for audiences to watch his personal project onscreen, Tanne hopes it simply does what he says all films can do: Serve as “empathy machines.” “If there’s some way to just plug in to this world for 95 minutes, just understanding what they [the characters] went through on some level, then we’ve done our job.”

Chemical Hearts is out now.