Chevy Chase knows what it takes to turn a president into a laughing stock, and he thinks Alec Baldwin is doing a marvelous job with his portrayal of Donald Trump on Saturday Night Live.

Chase, 73, became a household name thanks to both “Weekend Update” and for playing a bumbling President Gerald Ford during the first season of SNL.

Now, he takes delight in watching Baldwin skewer Trump on air weekly, and the president’s claim that the show is nothing more than a hit job is accurate, Chase told The Hollywood Reporter.

“That is exactly what Lorne [Michaels] is trying to do, make him look like an ass because he is one, for God sake,” Chase tells THR. “He’s an ass, and he is looking like an ass and hurting our country.”

Baldwin took over as Trump last year during the election season, his impersonation becoming an instant hit with viewers, except a few, including the president.

For his commander-in-chief portrayal, Chase didn’t try to look or sound like Ford. The comedy was in the wit and falls, of which there were plenty.

“Here’s a guy who, unbeknownst to himself, is clumsy,” Chase said of the Ford character creation. “That was just funny to me, like this is him punishing himself for being a Republican.”

Turning the president into somewhat of a boob was done for Chase’s personal political feelings, which was fine with the show’s brass, the actor said.

“I thought, ‘This [clumsiness] is funny and whatever I can do to get [Jimmy] Carter elected, by God I am going to do it.’ And it helped a lot, Gerald told me that,” Chase said, adding “I was a very liberal Democrat at the time, and I have not changed much.”

Carter went on to defeat Ford to become the 39th president.

Baldwin’s way of playing Trump is different than Chase’s approach to Ford because this current president has to be presented as a somewhat over-the-top character, Chase said.

“Trump’s a tough guy to spoof,” he said. “Now, I am not trying to compare Alec and myself — there is no comparison, I am much better looking — but the way I dealt with it was make no attempt to look anything or sound anything like Gerald Ford. I just wrote the stuff that was funny and then would be clumsy when it was the right time.”

Trump has made it clear he hates Baldwin’s impression. There have even been reports that it has rattled the former reality star. Ford, on the other hand, was hurt by Chase’s impression, the SNL veteran said, but not hell-bent on stopping it.

“I was compassionate about Ford’s feelings being hurt, but it’s like, you’re the president, you’re going to get a lot of shit,” Chase said. “I met Ford, and he was a lovely guy, a really nice person. He had no really hard feelings.” 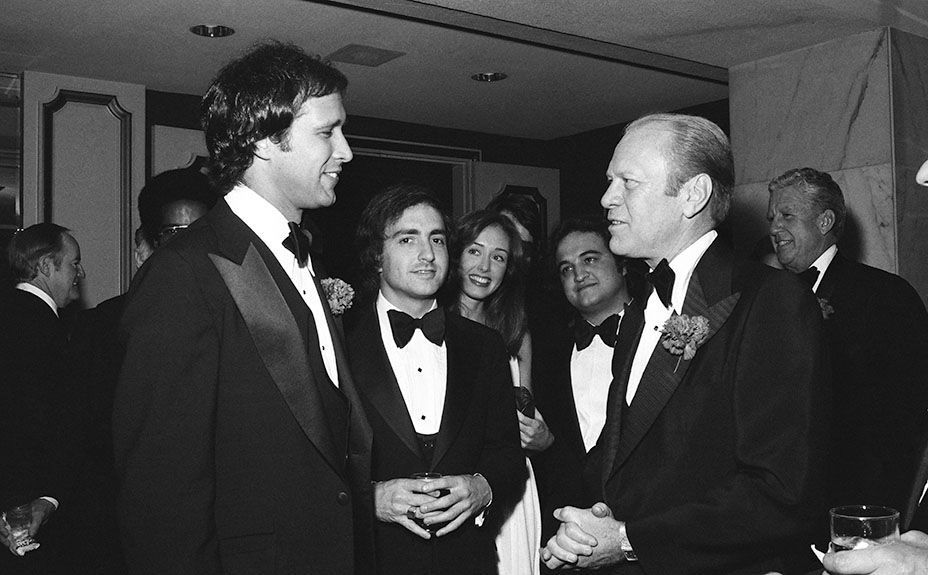 “For me, that was the best skit in what was a great show [last week],” Chase said. “I didn’t know who the hell she was at first, then I realized and oh my God. I am sure it affected Spicer a lot.”

Ford’s press secretary, Ron Nessen, actually hosted an episode of SNL back in the day in an attempt to curb Chase’s presidential impression, the actor said.

“I kind of surprised him because I still went thought a series of falls and comedy in the ‘Oval Office’ and it was pretty hilarious,” Chase said.

As for whether the show should pump the brakes now over the president’s ire, Chase said, “I don’t think they should stop at all doing what they are doing.”