If there’s a more indigestible lump of bouncy 1970s pop schmaltz than Paul McCartney’s “Silly Love Songs,” right now it escapes me. It’s one of a handful of intrusive music choices that director Kenny Leon makes in the dreary Broadway revival of Children of a Lesser God, a once-groundbreaking 1979 play by Mark Medoff that today needs no help showing its age. Opening with Stevie Wonder’s “Love’s In Need of Love Today,” played before the action starts to make us absorb the lyrics, the production tips the balance away from the author’s sensitive handling of deaf politics toward the bland reaffirmation that the heart is a more powerful communication tool than the human voice. If that sounds like the melodramatic fodder of a vintage Lifetime movie, you got it.

Leon’s sluggish production does eventually gather some steam in the second act, expanding beyond the banal romantic focus of impassioned teacher James Leeds (Joshua Jackson) and reluctant student Sarah Norman (Lauren Ridloff) into more complex issues. When it tightens its focus on the rights of deaf people to choose the terms on which they interact with the hearing world — weighing the virtues of American Sign Language, lip-reading and speech with conflicting ideologies — you can see why this was an important work back in its time. But Nina Raines‘ superior 2010 drama Tribes has since come along to examine related questions in a context both more compelling and less didactic. Not to mention the broader evolution of more enlightened attitudes toward the deaf community and minorities in general.

While there’s no self-evident reason to revisit this play in 2018, the production has an asset in Ridloff, a former Miss Deaf America who is an impressive natural on the stage. She moves with graceful assurance, her elegant hands signing with such expressive power she often requires no translation; she creates a persuasive physical characterization of a proud young woman who has steadily built up her defenses, walling herself off since childhood. Even when James’ persistent overtures wear down that resistance and she allows him in to become her husband and chief communication conduit to the hearing world, the fiercely independent spirit that ultimately will force her to go it alone again remains.

The action takes place in James’ mind on an arrestingly abstract set by Derek McLane of doorways and trees, in bold fluorescent colors that shift throughout via Mike Baldassari’s supple lighting. The distressed Sarah walks out as the play begins, leaving shell-shocked James behind to ask the standard soap-opera question of whether she fled or he drove her away. Spoiler alert: You won’t care. The long-winded answers play out over the remaining two-hour-20-minute duration, related by James in Jackson’s unrelentingly flat delivery.

To be fair, this is a somewhat thankless role, requiring the actor not only to wade through his own dialogue but also to repeat much of what Sarah is conveying to James in ASL (more for our benefit than hers). Jackson was quite strong in his 2016 New York stage debut, also directed by Leon, in which he played a Harvard academic whose cockiness deflates when he trips up on white male privilege in Lydia R. Diamond’s Smart People. It’s unclear if his presentational choices here are based on the carefully enunciated cadences that a speech therapist might use to facilitate lip-reading in a school for the deaf. But whether or not that’s the case, he gives an unfortunate performance of such droning monotonousness that it dampens the character’s supposed charms beyond repair.

James’ tweedy boss, Mr. Franklin (an awkward Anthony Edwards), asks him to take on 26-year-old Sarah as a special student, and her hostility about receiving instruction from a hearing person puts them at odds for a minute. He learns that Sarah has been a resident at the school since she was a child, cutting ties with her family at age 18 and staying on beyond the standard graduation age by working as a cleaner in the dorms. 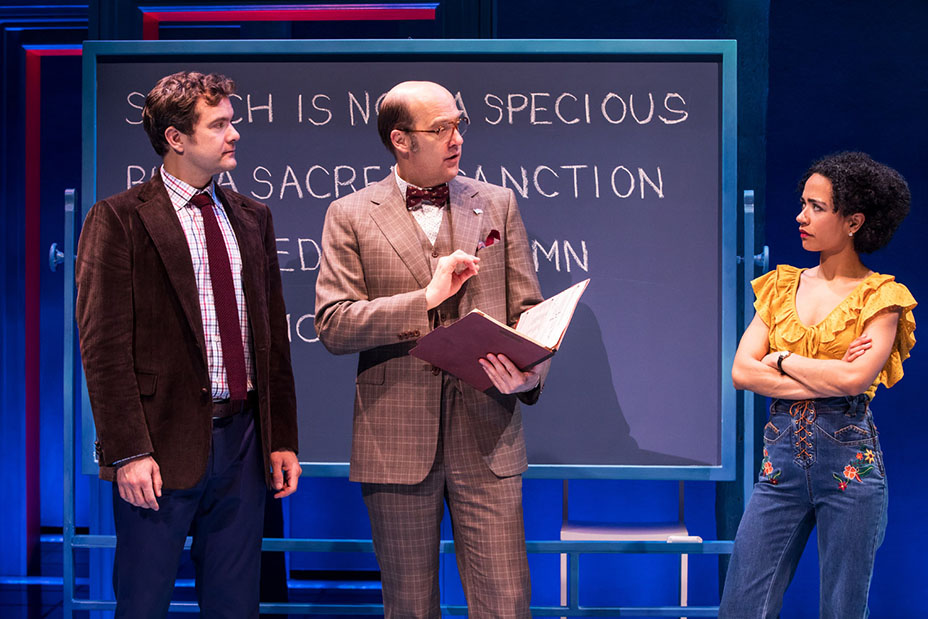 Her childhood friend Orin (John McGinty, forceful and spontaneous) is partially deaf and has conquered the difficulties of speech with determination. Unlike him, Sarah refuses to attempt any form of language other than ASL. She is clearly intelligent and strong-willed, declaring that she will not do anything she can’t do well. On the more pliant side is Lydia (Treshelle Edmond), a perky teenage student who makes no attempt to hide her crush on James, and, quite frankly, an annoying character who adds little.

There’s talk of 30-ish James’ college years, when his “left of liberal and right of radical” views chafed against those of his decorated military colonel father, a Vietnam veteran. And there are enough references to identify the time frame as the 1970s, despite costumer Dede Ayite keeping the period definition somewhat loose. (An entire conversation about a quiche is a closer indication.) Casting actors of color both as Sarah and her estranged mother (Kecia Lewis, terrific), Leon appears to be making not strictly color-blind choices, perhaps adding an extra layer of otherness to Sarah’s isolation. But with no adjustments to the text to touch on race relations, that potential opportunity is ignored, dropping in subliminal suggestions of fresh thematic texture without exploring them.

Medoff wrote the play for deaf actress Phyllis Frelich, to some extent based on the development of her relationship with her hearing husband Robert Steinberg. The hit premiere Broadway production won the 1980 Tony Award for best play, with Frelich and her co-star John Rubinstein both winning for their lead performances. Seven years later, Marlee Matlin won a best actress Oscar for the film version, in which she starred opposite William Hurt. She remains the only deaf actor to have won an Academy Award.

Even with Ridloff’s considerable stage presence, it would require more going on around her for her performance to have a comparable impact. There are strong moments in the reconciliation scenes with Sarah’s prickly mother, with Mrs. Norman finding warmth beneath her embitterment after years of clashes with her daughter. And dramatic sparks are set off when Orin starts pushing to politicize Sarah in a legal battle over the school’s discriminatory hiring practices, confining non-hearing faculty to marginal positions. Even if Medoff’s lack of economy makes the debate grow repetitious, those elements still carry some urgency, particularly when James and Franklin obtusely refuse to understand Sarah’s choice not to use a voice she can’t hear.

James continues to regard Sarah as an isolationist, while she balks at finding herself in yet another situation where she’s being managed. Both Sarah and Orin argue, in their respective ways, that being deaf does not make them intellectually inferior or in need of someone else to speak for them.

Those basic rights of autonomy, agency, respect and visibility should still resonate today, perhaps more than ever given the inherent power imbalance of the central teacher-student relationship. And yet they are strangely muffled by Leon’s insipid treatment of the love story. The shortage of chemistry between the leads makes it hard to get too worked up about whether Sarah and James can mend the bridge between their separate worlds. The moments in which he shares painful feelings relating to his mother’s death and she opens up about the damaging coping mechanisms of her adolescence should be shattering. Instead, they play out at a wan emotional distance.

Just as Jackson deserves credit for his commitment to learning ASL for the role, the production also has gone to admirable lengths in accessibility, providing supertitles at every performance and even hiring front-of-house staff proficient in signing. It’s just too bad the effort is in the service of a play that has not withstood the test of time.