Documentary-theater specialists Jessica Blank and Erik Jensen, best known for their powerful first-person narrative account of wrongful death-penalty convictions, The Exonerated, craft another profoundly stirring verbatim drama in Coal Country, world-premiering at The Public Theater. Shaped out of the words of survivors and family members of victims of the 2010 Upper Big Branch mine explosion in West Virginia that killed 29 men, this is a wrenching portrait of working-class American lives torn asunder and corporate greed given a rap on the knuckles in a sadly familiar travesty of justice.

Directed by Blank on a simple, rough-hewn wood set with an admirable straightforwardness that cuts right to the broken heart of the material, the piece is played with emotional honesty and bristling indignation by an exemplary ensemble. Their plain-spoken testimony is elevated by a suite of soulful original country-folk songs written and performed on guitar and banjo by three-time Grammy winner Steve Earle.

The music eloquently expands the scope of the drama beyond one single tragedy to illustrate the quieter losses of blue-collar livelihoods that have transitioned over generations from man to machine, and from the extended-family solidarity of “Union, God & Country,” to quote one song title, to nonunion exploitation, with human rights devalued by the primacy of productivity. The balladeer-style presence of Earle onstage, mostly seated to one side of the performers though at times interacting with a nod of his head or an assenting word, deepens the feel of the play as an affecting slice of classic Americana.

The musician opens on an empty stage with “John Henry,” a spare but evocative mini-narrative about a “steel drivin’ man” who “died in West Virginia with his hammer in his hand,” going on to recount the plundering of the land by a company that brought in big machinery to cut coal from beneath the mountain until “there ain’t no money in it.” The cast enter over a low rumble to the call-and-response refrain of “Heaven Ain’t Goin’ Nowhere,” instantly amplifying the spiritual dimension.

In a framing device with more payoff as a closing bookend than a somewhat awkward opener, Blank and Jensen begin the play proper with the summary of Judge Berger (Melinda Tanner), presiding over the trial of Don Blankenship, the Massey Energy CEO convicted on the watered-down charge of “conspiracy to violate mine safety laws.” Because he was not charged with directly causing the fatal Upper Big Branch explosion, the grieving family members hoping to read their Victim Impact Statements to the court went unsatisfied. 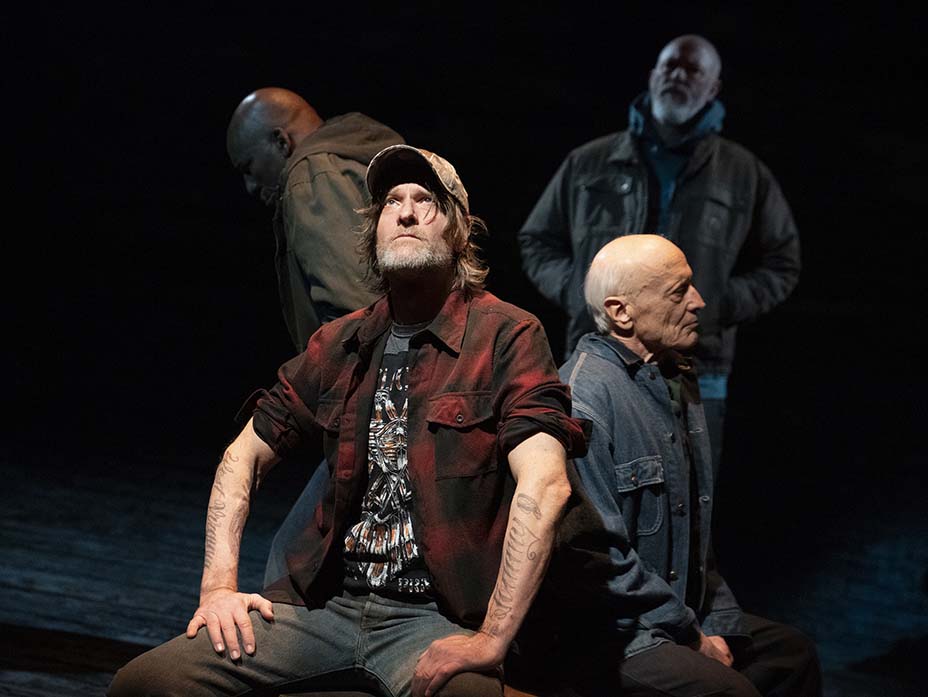 In direct-address dialogue lifted from interviews conducted in 2016, we meet seven individuals who lost husbands, partners, fathers, sons, nephews and friends in the explosion and learn of the physical bonds that were shattered that day.

Drawn with warmth, humor and disarming candor, those characters include Gary (Thomas Kopache), a 34-year veteran of the mines, like his father and grandfather before him; Tommy (Michael Laurence), a proud Appalachian and another third-generation miner who was working at Upper Big Branch with his son, brother and two nephews; Goose (Michael Gaston), a sturdy former all-star athlete who dropped out of college and ended up in the mines; his adoring, salt-of-the-earth wife Mindi (Amelia Campbell); Patti (Mary Bacon), a hard-working single mother engaged to a single father who lived next door for 22 years before asking her out; Roosevelt (Ezra Knight), a burly African American whose academically gifted father had to quit his job as a history teacher and go into the mines in order to support his family; and Judy (Deirdre Madigan), a coal miner’s daughter who became a city doctor but had a beloved younger brother working underground.

The shared background of these people is given poignant voice in “The Mountain,” in which the performers sing of their enduring ties to the land, even after everything it had to give, in terms of timber and coal, had been taken, leaving only ghosts in empty tunnels and towns drained of life. That process of Rust Belt community disintegration described here echoes some of the points made so compassionately in J.D. Vance’s excellent book, Hillbilly Elegy.

The playwrights sculpt the material to sketch the personal histories of each character and their relationships, at the same time supplying a fascinating rudimentary understanding of the workings of a coal mine. We hear of the disorienting nature of living without daylight, inhaling coal dust in unpredictable temperatures that can be sweltering or freezing. And we learn about the longwall, the part three miles inside the mountain where the top-grade coal that fetches the highest prices is sheared off by a hundred-ton machine run by a crew of men. Behind the longwall is a no man’s land called the gob, where methane buildup makes carefully monitored ventilation standards imperative.

Goose became aware the place was “a ticking time bomb” months before the methane ignited, creating a deadly fireball, but pressure from management not to slow down production meant no time for proper safety checks. (It’s revealed that Blankenship’s compensation package was scaled according to productivity.) And with the union out of the picture, company stand-over tactics made it clear that anyone who complained would be out of a job in an area where the only employment was coal-related. At Mindi’s urging, Goose started taking detailed notes on conditions in the mine.

The growing sense of dread is most movingly conveyed by Patti, in a monologue that Bacon delivers with grace and sorrow, as she describes her partner’s increased fatigue and worsening health, and his insistence on returning to work even after predicting that “one of these days I might not make it out of the mines.” 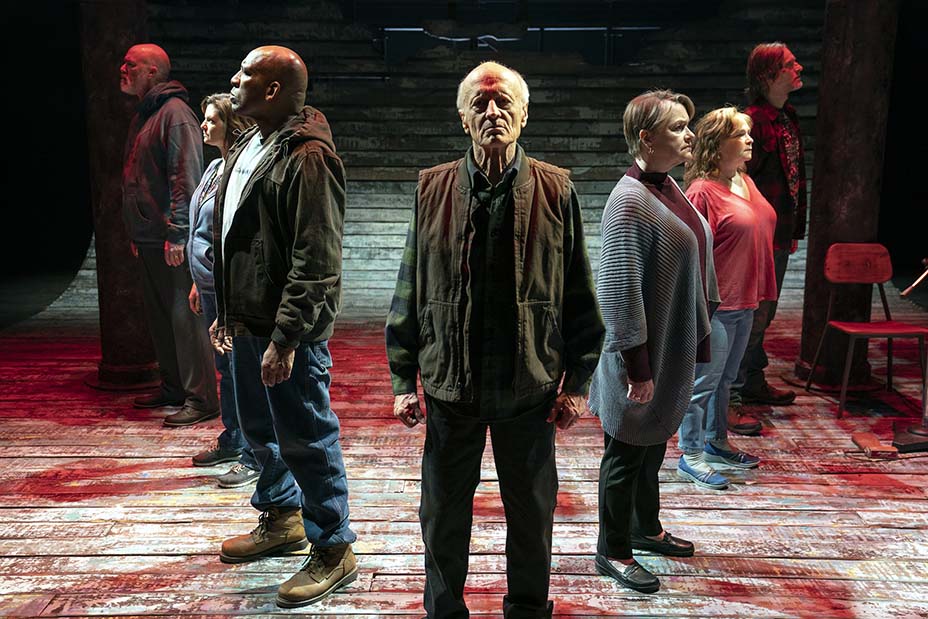 The chaos of the explosion is vividly rendered in the confusion of ambulances and Massey company vehicles that blocked the roads and made it hard for family members to get to the site, while the suspenseful agony of uncertainty ties a knot in your stomach as they wait for word of survivors. The cold efficiency of an HR executive calling out names from a clipboard at the “Family Gathering Center” to go and identify bodies packs a horrifying impact.

There’s awful sadness, too, in the suspicion with which the blue-collar families regard Judy, her citified clothing suggesting a class divide that made her feel for the first time like an outsider. Madigan’s harrowing monologue finds searing pain in the experience of a medical professional accustomed to death, requesting gloves so she could touch the dismembered parts of her brother’s body. “That’s what they gave us. This is what we got back,” she says. “My brother was beautiful. He was not this.”

Earle’s songs in this latter part significantly intensify the emotional wallop, particularly the mournful “Time Is Never on Our Side” and the hymn to family bonds, “It’s About Blood,” which ends with the names of all 29 men killed in the blast. (The songs written for Coal Country form the core of Ghosts of West Virginia, the new album from Steve Earle & the Dukes, due out May 22 from New West.)

The strength and focus shown by Gaston when Goose takes the stand to testify at Blankenship’s trial makes his one of the standout performances, and the damning evidence against the former CEO is shown in a cruelly jaundiced light when his post-sentencing outcome is related, along with his self-righteous efforts to restore his reputation. Blankenship may be unseen onstage, but he’s a malignant presence. At a time when the White House is issuing shameless pardons to white-collar criminals, the material here is maddening but sadly unsurprising.

The creative team and cast deliver a powerful eulogy for the men who lost their lives and a testament to the fortitude of the loved ones left behind to grieve. Coal Country is political theater of the most lucid, urgent and necessary kind, given soaring emotional heft by Earle’s songs and his superbly evocative string-picking. The show closes without sentimentality but with a heartfelt expression of loss and longing as Bacon’s Patti, in a beautiful voice, sings “If I Could See Your Face Again.”