The Karate Kid spinoff series Cobra Kai has been a welcome boost to the careers of Ralph Macchio and William Zabka, who donned the karategi to face off once more as timeless rivals Daniel LaRusso and Johnny Lawrence. But the series, the first two seasons of which debuted on Netflix globally Aug. 28, has also led to a career renaissance for Martin Kove, the strong-jawed character actor who plays the franchise’s most memorable antagonist Sensei John Kreese.

A bona fide television star in the 1980s, cemented by a leading role in CBS’ ratings monster Cagney & Lacey, Kove transitioned to action roles on the big screen in films such as Steele Justice and Rambo: First Blood Part II. But it was his villainous turn as a troubled Vietnam veteran turned martial arts master in 1984’s The Karate Kid, as well as its sequels in 1986 and 1989, that became his most widely known movie role and something that became as much of a curse as it was a blessing.

Ralph Macchio on How He Survived Lean Years in His Career: "I Still Live Fairly Modestly"

Since his television and movie heyday, the 74-year-old has carved out a solid career as a character actor but Kreese followed him around, with fans and strangers often quoting his lines from the film at him. He even reprised the character, unofficially, in a music video and comedy shows before the chance to play Kreese, properly, arose once more in Cobra Kai when he appeared in the final episode of the first season before becoming a regular for the second.

Cobra Kai is shifting to Netflix after YouTube Red, where the first two seasons aired, made a decision to move away from scripted series. As well as the first two seasons of Cobra Kai, Netflix has also picked up the third season that will premiere on the platform at a date to be determined.

As Cobra Kai hits Netflix, The Hollywood Reporter spoke to Kove about returning to play Kreese and how the role led to him becoming “hot” in Hollywood again and working with the likes of Quentin Tarantino and Sylvester Stallone.

You’re most widely known role is arguably in The Karate Kid films, and now Cobra Kai, what are your feelings towards the franchise overall?

Karate Kid is a gift that keeps giving, and everybody loves it. To me, the star of Karate Kid, the original movie, was Robert Mark Kamen, the writer. Because how many other movies can boast five or six iconic lines, lines like: “Sweep the leg.” “No mercy.” “Mercy is for the weak.” All that [from one movie]. “Wax on, wax off.”  There’s four or five right there. These are the classics that stay alive.

Why do you think the franchise struck such a chord with people, over such a long period of time?

The [original movie] was a religious experience to so many. Ralph Macchio, Billy and I, we’ve gotten to do all the [fan shows and conventions] and stay together 30 years before this new series came along. And what we saw [at the shows and conventions], one of three things that happened in the movie resonated with people, things that helped make it a religious experience. Number one, in 1984, [the main characters] were really bullied. Number two, there’s a relationship with a woman, or romance that did not work out. And number three, there’s the fish out of water theme, somebody who is moved around a lot and never has any roots. So I found out, through autograph shows and talking to people, that everybody felt, in some way, the Karate Kid experience. That was depicted so well in the movie, that 30 years later, the show does well too. It brings those themes back, even though we’re always introducing new elements like these teenagers. 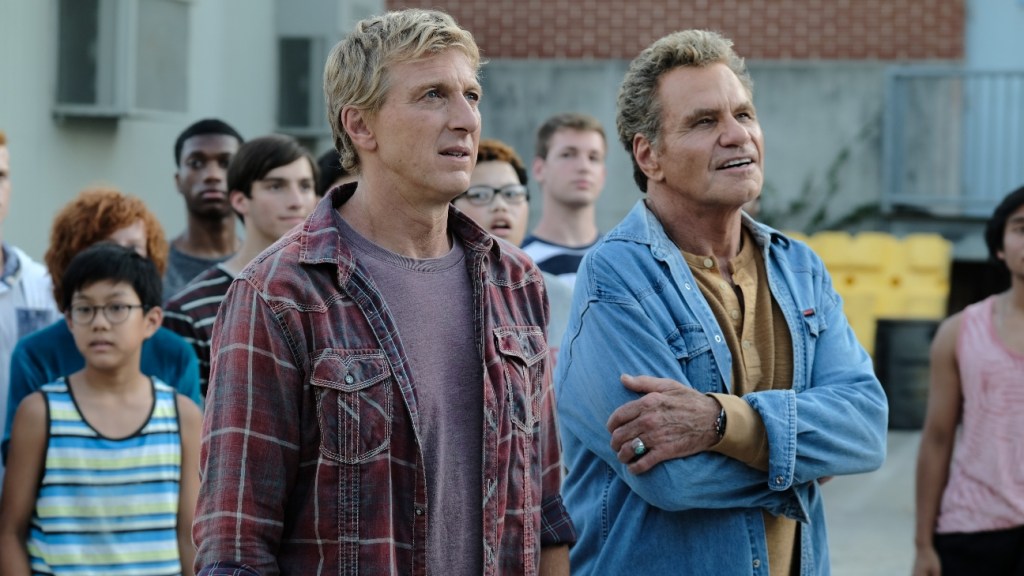 Cobra Kai has given you a chance to revisit John Kreese, were you wary of returning to play the same character again?

I wanted to come back to the role. I was quite leery to do it as written for the movies, but my basic insistence to the [Cobra Kai] writers was, “Are you going to write this character vulnerably? Are you going to give him some versatile situations?” And they did, they had him coming off episode-one, season-two as if he was a big shot. He portrayed that everything’s cool, and he’s coming back, and he wants to be in Cobra Kai, because it’s now big news. He lives in a shelter because he has no money. Then [Zabka’s character] follows him one day, and they have a great scene in the shelter where I’m in tears, and Billy’s in tears. He takes me back into Cobra Kai. This is after episode-one, where we had a big fight, and I threw him through glass.

It’s the writing, though, isn’t it? You’ve got to have excellent writing to draw you in and keep you there. Of course, it’s all in the writing. You can not recreate and do sequel after sequel unless you have good writing. Sylvester Stallone’s a friend of mine, and he’s a brilliant writer, and that’s why he has been able to keep the Expendables and the Rambos and all of that alive. It’s all because of the writing.

It’s interesting you mention Stallone, the other character you’re really well known for is the helicopter pilot from Rambo II. Were you cast in that around the same time you were cast in Karate Kid?

Right after, about a year later. And I’m going to tell you a very funny story about that. Four or five months ago, I get a message from a director who would like to meet me and read, he wants me to read for the new Rambo. So I said to myself, “I’m not going to read. I didn’t read for the old Rambo. I didn’t read for Rambo II.” So I call up Stallone, I say, I leave a message, I say, “Sly, this director wants me to come in and read. Number one, I didn’t read for you, I came right from Karate Kid, right into Rambo six months later. Didn’t read for you then. And number two, I probably can’t do it anyway, because I’ve got to go and shoot season two of Cobra Kai. And three, I don’t want to read, because I’m a friend of yours.”

He calls me back and leaves me a message, “Marty, I don’t think you should read. I don’t fucking think you know how to read. You’re like me, we get people, we communicate with people with smoke signals.” It was the funniest message I ever heard. But it was like, they changed the character anyway, they made him from an American to a Mexican, and it’s a great story.

I loved Ericson, the guy from Rambo II. I would love to go back and play that role again. I’d love to. I told Sly I wanted to do the Expendables, the new one. He is a terrific guy, and we go far back as having our own personal manager, where Sly used to get jobs in New York as an usher in the theaters, and I used to get jobs as Santa Clause at a department store. That’s how far, the early ’70s, we go back. We had the same old German clockmaker who was our personal manager. 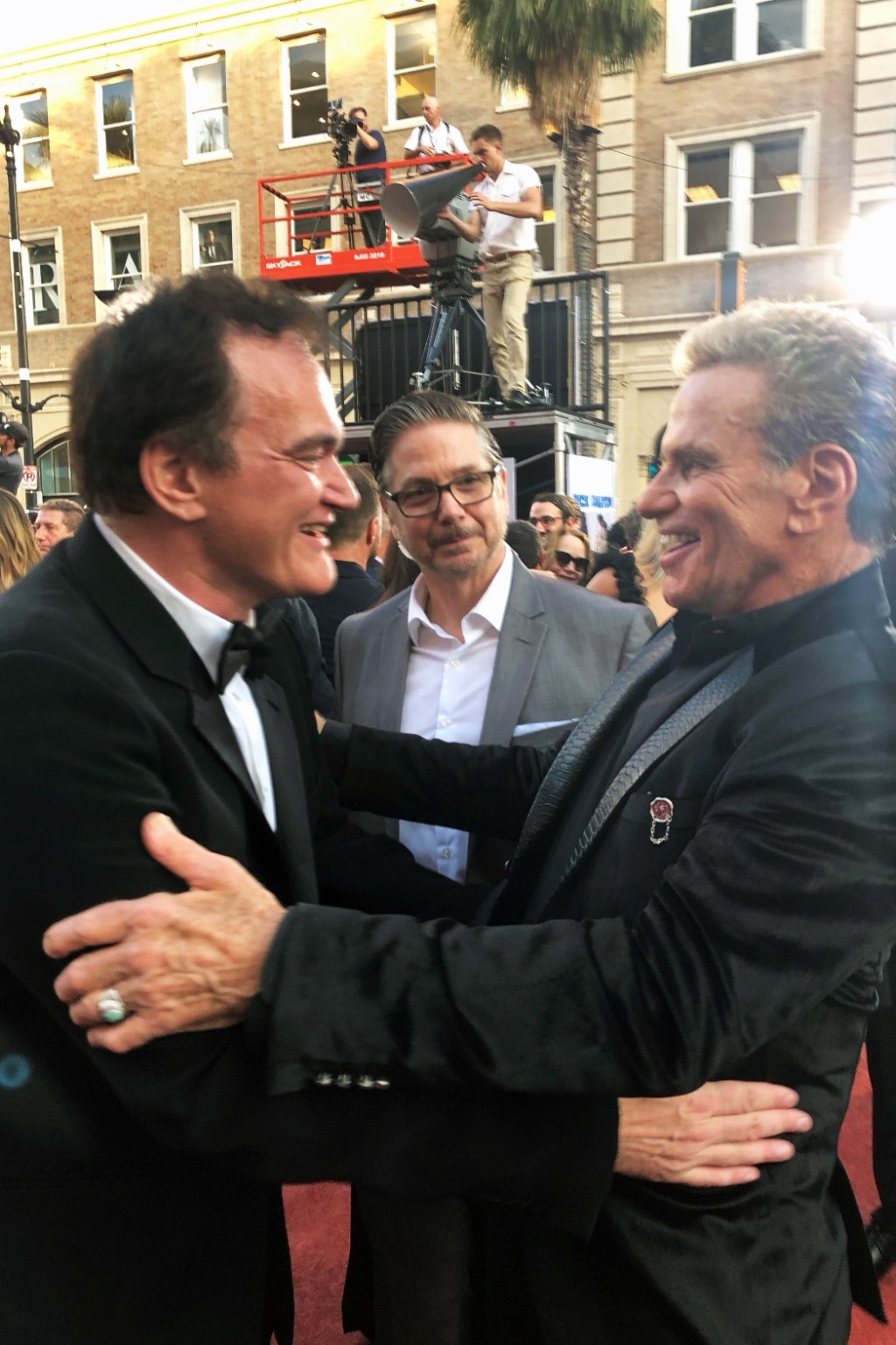 Over the years, is it fair to say, because you’ve done a lot of bad guy roles. Do you feel like you’ve been typecast a little bit?

Yeah, you do. God knows how many things I’ve done that were leading men, and funny characters, this picture White Light, even Steele Justice, a whole slew of them. But you can do five lines in a hit [like Karate Kid]. Five lines in a hit movie, everybody remembers you, and it’s great for your career. You do a lead in a movie that nobody sees, nobody goes, so people don’t even know you did it. It could be your best work, but if it doesn’t get distribution, if it’s not really a good movie, it gets buried in DVD or video-on-demand, and the work you put in, the research you put in, it’s all in vain.

I have one line in Once Upon a Time in Hollywood, I open up the movie, and it’s a Western, and I’m in heaven. I had the greatest time in the world just doing that scene with [Leonardo DiCaprio] and [Quentin Tarantino].

Let’s talk about how you got that role in Once Upon A Time, it was quite an adventure to appear in a Tarantino film, right?

I was driving Quentin crazy for three years, wanting to be in Django Unchained and The Hateful Eight. He was just terrific. How it all started was, it was a screening for the Inglourious Basterds, a screening at the Directors Guild. Brad Pitt and Michael Fassbender and Diane Kruger and Quentin are on the dais. I raised my hand to ask a question, he goes, “Martin Kove, Martin.” This is in front of 500 of my peers at the screening. “Martin Kove, one of my favorite actors. I love you in this movie Firehawk. You were great.”

Firehawk was a piece of shit that I did in 1992 in Manila, a shoot-’em-up. Garbage. But Quentin loves and sees everything because he worked in a video store, and he knows everything about my career, everything. So anyway, we go back, and Brad Pitt grabs the mic and says, “And Mr. Kove, we just watched Karate Kid with my six-year-old daughter, and you are a legend in my house.” I’m feeling like a million bucks. I go back, we get a phone number, Fassbender comes up to me and says, “I’ve been watching your career forever, and I love your work.” So I feel like a million dollars.

I go home, I can’t read his handwriting on the phone, on his message. I can’t read his handwriting. For six months, I’m trying to find a way to get to him, to get to Django, to be in Hateful Eight, never happened. One day, I get a call, “Quentin wants you to be in Once Upon a Time in Hollywood.” I say, “Great.” It’s a small part, but I always wanted to work with him. So I go and do it, and I go to the party, and I ask this question, it’ll answer your question, I said, “Quentin, for three years I’ve been driving you crazy to try to work with you. Did you hire me because I’ve been driving you nuts for three years? Or because I’m hot from Cobra Kai?”

He takes a long pause, big smile, and he says, “A little bit of both.” He’s a savvy dude.

It’s like Cobra Kai is a wonderful greased gear that everybody loves. It’s so well done. It’s opened lots of doors.

This is interview has been edited for length and clarity.