Running through a list of bookings for the 72nd Emmy Awards on Sept. 20, an agent who represents top fashion stylists — speaking to The Hollywood Reporter just 10 days before the ceremony — acknowledges a substantial lack of confirmations. “That is indeed a light board,” she says as she surveys her chart.

As the awards — a largely virtual affair for the first time approach, a divide has appeared in celebrity ranks. Some stars will be shopping their own closets, while others, including Insecure’s Yvonne Orji and Unorthodox’s Shira Haas, are planning to go the traditional route and work with a stylist to pull designer looks for the big night.

So too is Zendaya, a first-time nominee for Euphoria, who works with star stylist Law Roach and recently said, “I do want to dress up. I still want to have the experience. … I definitely want to pull a look and maybe just walk my living room carpet.”

Fold in the economic and social upheaval Americans have experienced over the past seven months of stay-at-home living, and some stylists note that many Emmy nominees are highly conscious of not dressing in a manner that feels tone-deaf or inappropriate. The night, typically one of the most high-profile red carpets of the year, may make for a marked shift in how actors dress for an awards show.

“People want to be more restrained,” says A-list stylist Erin Walsh, whose clients include Westworld’s Thandie Newton and I Know This Much Is True’s Mark Ruffalo, both nominees this year. “That’s not only because of this year’s format but also because of what’s going on in the world. I’m a firm believer that fashion can be used for causes you believe in, so I’m all for attendees embracing a green carpet challenge or wearing something by a Black designer or an unknown designer, or perhaps a brand that’s really been impacted by the shutdown.”

Cristina Ehrlich, who works with Mrs. America’s Uzo Aduba and Big Little Lies’ Laura Dern, each a 2020 nominee, agrees: “When the Emmys were first announced [on July 28], they were overshadowed by bigger movements going on in our society and world. With quarantine in play, the desire to wear a big ball gown is not the trend. It comes down to trying to meet in the middle, between glamour and focusing on the platform and causes our clients wish to represent.”

Aduba’s Emmys look should be a perfect example, Ehrlich adds. “She exudes class [in her personal style], but she’s also very aware of the time in which we are living, and that’s reflected in her approach to fashion,” she says.

Once a mostly virtual Emmy Awards was a foregone conclusion, show producers and host Jimmy Kimmel sent a letter to nominees that suggested a playful dress code, encouraging them to “come as you are, but make an effort.” 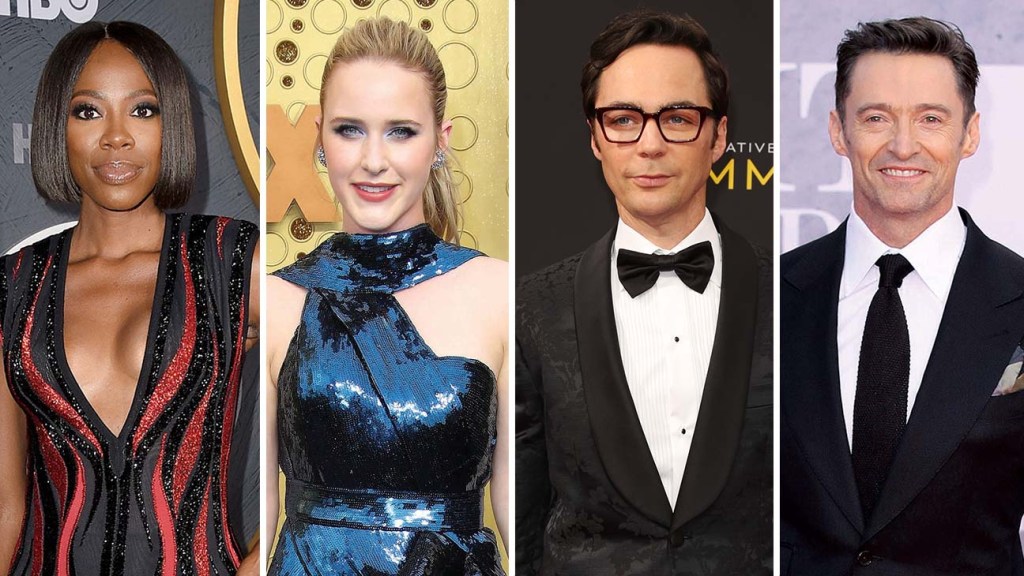 Jewelry houses are likewise observing a shift. “There is a much more relaxed attitude and approach this year — a need for pause across all of the ‘extra,’ so to speak,” says designer Valerie Messika, who outfitted Sandra Oh, Tracee Ellis Ross, Charlize Theron and Dern with over-the-top gems from her eponymous collection during the 2019-20 awards season. “There is a desire for more subtle glamour. This means classic pieces, styles and shapes — more earrings and less statement necklaces.”

But anyone thinking that low-key glamour might translate to boring would be mistaken. “There will be a lot of loungewear, for sure, but I’m also excited to see how people get creative with their looks,” says Jordan Johnson, who with partner Jill Lincoln styles clients who include The Marvelous Mrs. Maisel nominee Rachel Brosnahan.

Once Brosnahan was nominated, the pair says, text messages were exchanged, and a dressing strategy was quickly adopted. “It’s nice not to be going through all the minutiae and unpacking endless FedEx boxes,” Lincoln adds. “Everything is much more simplified. We have an idea and a plan, and so far, we’re sticking to it.”

Adds stylist Chloe Hartstein, who recently started working with GLOW nominee Betty Gilpin, “People are being super chill about it, which is nice — at this point normally, my stress level would be very high. Betty is not only beautiful, she’s smart and confident and strong, and my job is to create something that projects that while also being mindful of what’s appropriate and approachable. Betty also loves fashion and will try on everything; not everybody is like that. We’re thinking about the optics and the message, but not at the expense of having a little fun.”

For some stylists, as well as hair and makeup artists, it’s not quite the return to work many were undoubtedly hoping the night would turn out to be. It’s a sector of the industry that’s been hard hit by Gilpin COVID-19’s impact. Every press junket, film premiere, fundraiser or preparty that’s been canceledRuffalo or converted to a virtual event represents lost income for the glam teams that devise the fashion and beauty elements integral to creating red carpet moments. Kate Stirling,Los Angeles-based managing director of The Wall Group, with a roster of A-list stylists that includes Walsh, Karla Welch, Elizabeth Stewart and Elizabeth Saltzman, points out that with this year’s show focusing primarily on nominees, a comparative lack of presenters and no audience also means that the pool of talent that typically would work with stylists has diminished considerably. “It’s only about 10 percent of what we normally would see [at the Emmys],” she estimates.

On the men’s side, stylist Michael Fisher’s client list includes nominees Hugh Jackman (Bad Education) and Jim Parsons (Hollywood), both of whom have opted to self-style this year, he says. “Many clients want to step back, and an awards show does seem like a weird conversation to be having at the moment,” he says. “It’s such a personal matter, so our discussions mainly have been rooted in making sure they know I’m here to support them.”

Fisher also is working with Nicholas Braun, nominated for Succession, and Ramy Youssef, a double nominee (for lead actor and directing) for Ramy. “Neither of them wants to make too much of a fuss,” Fisher says. “Ramy just wants to look comfortable and like himself, so with him, it will be just about tuning up and polishing a bit. For Nicholas, it’s his first nomination; he really loves fashion and likes to go for it. And he should have that moment if he wants it.”

With Braun in New York City and Youssef in Los Angeles, Fisher also had to get creative not only with logistics but also with how social distancing will apply. An assistant in L.A. will organize what he’s pulled for Youssef and then will step back 6 feet while Fisher and Youssef discuss choices over FaceTime. “And for Nick, his home and my studio here [in New York] are really close together, so whatever his personal choice is for getting dressed, I can easily work with it,” he adds.

Ehrlich likewise notes that every aspect of her work is being done virtually, starting with sketches sent via email.

“There is no compromise in terms of what the pandemic means to stay safe and socially distant,” she says.

If this year’s Emmys share anything with past ceremonies, it’s that every stylist is ready for a client to change their mind. Walsh notes that while she has discussed dressing options with Ruffalo, she knows he may make a last-minute decision to eschew anything that feels too formal.

“Mark could decide the day before that he wants to wear a T-shirt and jeans, and that’s totally cool,” she says. “He definitely fits into that ‘less is more’ idea that so many people are embracing this year. One of the nice things that’s emerged out of all this is that the spotlight has been removed from the fashion. This year I feel like it’s not about the game, it’s about celebrating the work.”