The true-life story that inspired the new musical Come From Away would seem like the stuff of a Frank Capra movie. The show relates the tale of how a small Newfoundland town in 2001 found itself unexpectedly hosting 7,000 airline passengers stranded there for days after 9/11. But though the material might have lent itself to sickly sweet sentimentality, creators Irene Sankoff and David Hein have crafted a heartwarming and thoroughly entertaining musical. Especially in these politically fractious times, it should prove a true crowd-pleaser on Broadway following previous hit engagements in San Diego, Washington and Toronto.

The show’s accomplishments seem all the more surprising considering that the only previous theatrical credit for the Canadian husband-and-wife team responsible for the book, music and lyrics is something called My Mother’s Lesbian Jewish Wiccan Wedding. This musical, based on interviews with many of the real-life participants, features a savvy mixture of humor and emotion in its fast-paced story, expertly staged by Christopher Ashley.

The production cannily employs a superb 12-person ensemble to play both the residents of Gander, Newfoundland, and the “come from away” people they’re forced to put up for five days. The doubling of the roles reaffirms the common humanity of the two groups, the latter consisting of people of many nationalities, not to mention a menagerie of animals including an epileptic cat and a pregnant chimpanzee.

Bill Condon to Direct 'A Star Is Born' Onstage

Amusingly trading on Canadian tropes, the story begins with a scene featuring the town’s mayor (Joel Hatch) and several of his cronies at a Tim Horton’s coffee shop, where, as he puts it, “everything starts and ends.” The town is jolted by the news of the horrific events of 9/11 and the short-notice announcement that dozens of planes are about to be diverted to Gander’s unusually large airport, formerly an important refueling stop for transatlantic flights.

The arrivals are a familiar mixture of disparate types, including a gay couple both named Kevin (Chad Kimball, Caesar Samayoa); a female American Airlines pilot (Jenn Colella); a divorced Texan woman (Sharon Wheatley) and an English oil company engineer (Lee MacDougall), who bond romantically during the crisis; a jaded New Yorker (Rodney Hicks), who has trouble overcoming his suspicions about his generous hosts; a NYC firefighter’s mother (Q. Smith), desperate to learn if her son is safe; and a Muslim Egyptian chef (Samayoa) treated with suspicion by the other passengers. 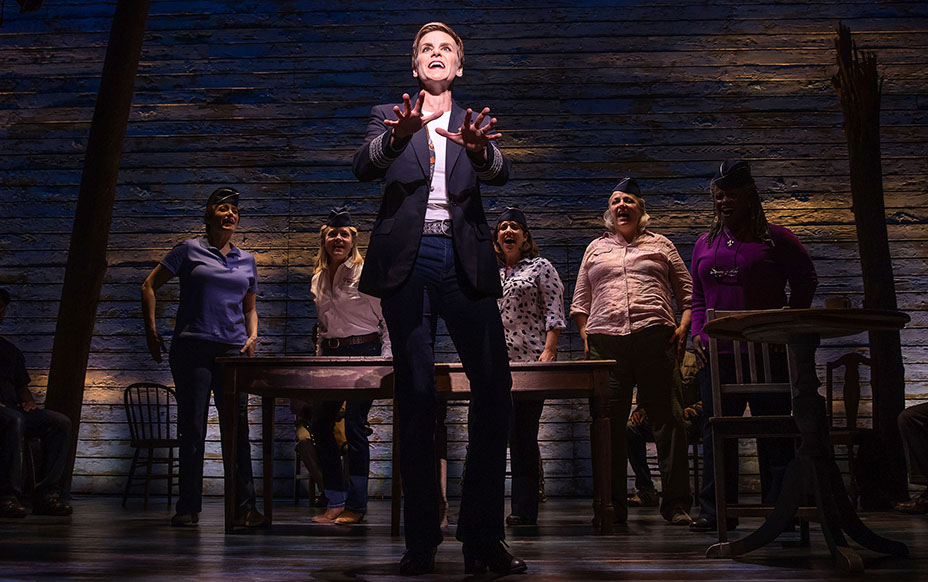 The Newfoundlanders include the local SPCA head (Petrina Bromley), intent on rescuing the airplanes’ stranded animals; a union official (Kimball) who recruits his striking bus drivers to provide transportation; and a local television news reporter (Kendra Kassenbaum) on her first day on the job. Despite the doubling and tripling of roles, the numerous characters are all vividly rendered, thanks to the skillfulness of the writing and performances.

Whatever your relation to the events of 9/11, it’s impossible not to be moved numerous times during the show, such as when the town’s guests marvel at their hosts observing a minute of silence in solidarity with America, or a Canadian managing to communicate with a non-English speaking African couple by pointing to passages in their Bible. But for every poignant moment there’s an amusing one, the best example being a raucously funny scene in which several visitors are made honorary Newfoundlanders by participating in a ceremony that involves kissing a codfish.

Helping to prevent the show from becoming too treacly is the propulsive, Celtic and folk-flavored score, performed by an onstage band including musicians playing uilleann pipes and accordion. Tellingly, the musical is composed almost entirely of group numbers, with the principal exception of “Me and the Sky,” powerfully sung by Colella, in which the airline pilot laments how “the one thing I loved more than anything was used as a bomb.” Although not particularly memorable, the music proves consistently engaging and serves the storyline beautifully. There are no numbers that stop the show, but plenty of them that move it along.

With the exceptions of Colella (Urban Cowboy, High Fidelity) and Kimball (Memphis), the ensemble consists mostly of unfamiliar faces. But all the performers are first-rate, and the fact that they actually look like real people rather than glamorous, Pilates-toned Broadway regulars makes them even more endearing.

The minimalism of the staging, including Beowulf Boritt’s set, consisting largely of bare trees and tables and chairs moved around to suggest various locations, only enhances the show’s effectiveness. Serving as a welcome reminder of people’s inherent goodness and generosity, qualities that are so necessary to survive troubled times, Come From Away is the feel-good show of the season.