Common, a friend of the brand and an activist working to reform the criminal justice system, selected the two nonprofits that will benefit from the watch’s sale. One is the Anti-Recidivism Coalition (founded by film producer Scott Budnick), which advocates for just policies that decrease incarceration and supports the well-being of the formerly incarcerated. The other is Cabrini Green Legal Aid, based in Common’s hometown of Chicago, which helps low-income people who have been adversely impacted by the criminal justice system.

“Common became a fan of Shinola a few years ago,” the company’s CEO Shannon Washburn tells The Hollywood Reporter. “He’s toured our facilities and met some of the staff in our factory. He is also the proud owner of a few of our timepieces. Common is close to this cause that we wanted to support, and he and his team handpicked these organizations. As a brand, we believe in supporting causes that bring equity and justice to the world.”

Shinola has pledged to donate $176,400 (equaling total sales) to the two groups.

“As states continue legalizing cannabis,” said Common in a statement, “we cannot overlook the communities that have been so impacted by harsh sentencing, and now exclusion from the industry. I stand with Shinola in bringing awareness to this problem and also creating solutions by supporting organizations who fight for these men and women every day.”

The 43mm watch — part of the Detrola line, which features its hand-assembled Argonite 705 quartz movement — has a black dial with a motif of marijuana leaves, green Super-LumiNOva details and a TR90 resin case anchored by a stainless steel core. Limited to 420 pieces, it sells for $420 at shinola.com.

Says Washburn of the design of the watch, “It celebrates cannabis in all its glory. We wanted to make something that reflects the transition that we’re seeing with cannabis. It’s not just for drum circles anymore. So, it’s a little bit counterculture, but it’s also a refined experience — hence the name. Plus, in case you lose track of time, we’ve made it easy with a standout green number on the four o’clock — and twenty-minute — marker. The green, smoky transparent case lets the wearer look deep inside this watch and get lost in the inner workings.” 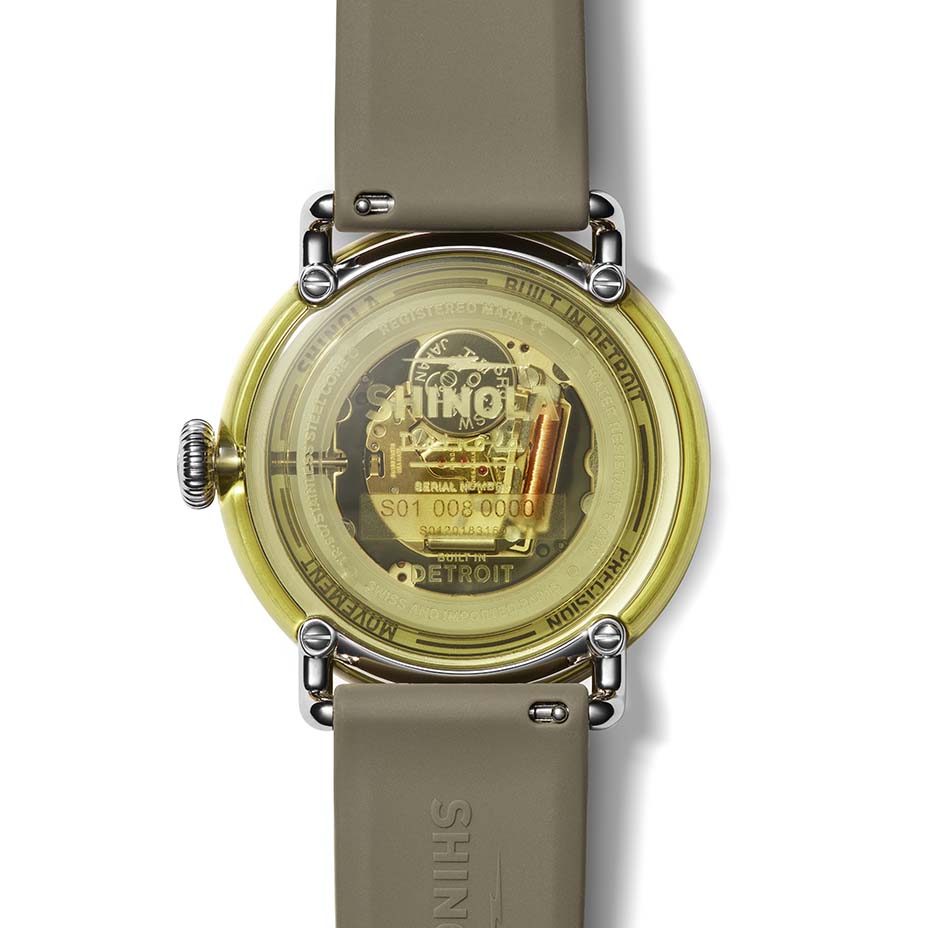 Washburn adds that Harrelson has also been longtime fan of the brand: “Woody, who is no stranger to the world of cannabis and talking about causes he believes in, was excited to jump on board and help us announce the launch of this watch and the initiative.”

Harrelson, an advocate for the legalization of marijuana, said in an emailed statement that he’s supporting the company and its launch of the watch because “they believe in Detroit and played a part in the city’s revitalization. … Everything they do has integrity and class, and this initiative is a perfect example of that.”