Gender-flipping roles in well-loved shows has become a tried and tested way to lure theater audiences, especially the jaded ones who might think having seen something once or twice, there’s no reason ever to go back. In the wrong hands, changing a character’s gender can be a gimmick, but at its best the switcheroo can make the material sing in a whole new way.

That’s exactly the result, both literally and metaphorically, with director Marianne Elliott’s take on the beloved Stephen Sondheim-George Furth musical Company, a production that adds some tactical tweaks and inspired reinterpretations in order to make the work seem newly minted and modern, especially given the clean neon-bright lines of Bunny Christie’s stage design. The rejig feels so seamless and smooth, viewers who never saw an older version might marvel that it could be done any other way.

First staged in 1970, the show starred Dean Jones and later Larry Kert as 35-year-old bachelor Robert, object of the affection, concern and occasional envy and desire of five married upper-middle-class Manhattan couples in his inner circle. En route, the book by Furth, a series of fragmentary vignettes shown out of chronological order, offered a thoughtful examination of contemporary romantic and marital mores and anomie. 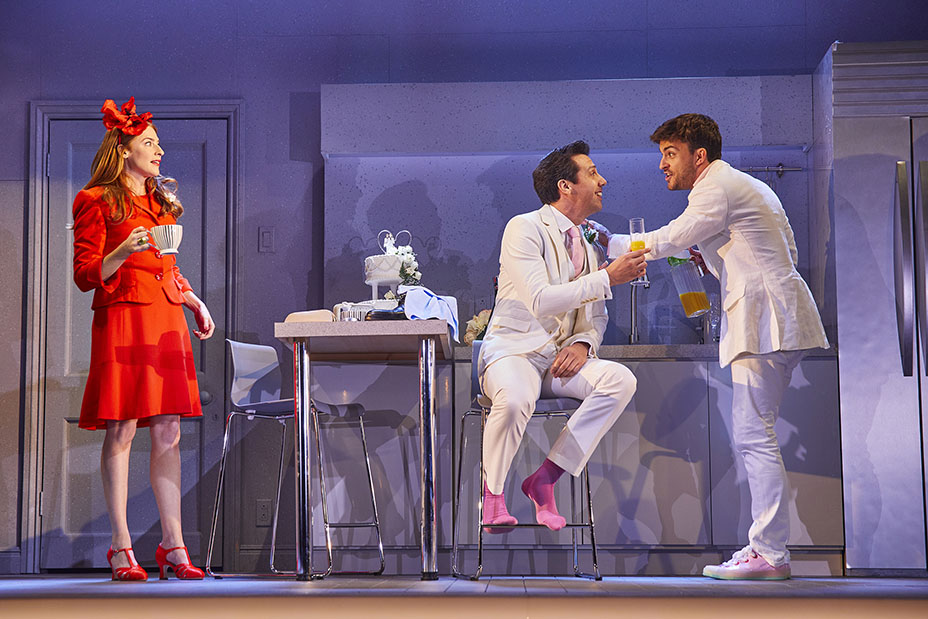 In a way, Elliott continues that sociological project here, but puts a whole new spin on it, primarily by casting London stage regular Rosalie Craig in the lead role, now renamed “Bobbie,” and also, in a nod to the new legality of gay marriage, making one of the pairings, Amy and Paul, into a male couple, Jamie (Jonathan Bailey) and Paul (Alex Gaumond).

All things considered, it’s not as drastic a change as the all-male ensemble that director John Tiffany reportedly proposed to Sondheim, which the latter felt didn’t work after they tried it with a read-through. But in some ways, Elliott’s reinterpretation creates its own complicated dramatic and musical calculus, a set of problems she solves for the most part very adroitly, with immaculate assistance form the cast and major collaborators such as Christie (who worked with Elliott on The Curious Incident of the Dog in the Night-Time) and lighting designer Neil Austin (Harry Potter and the Cursed Child), among others.

For example, just as the songs for Bobbie/Robert must be transposed in order to accommodate Craig’s higher singing range, many details in the plot must be adjusted to suit the casting changes. For instance, the tentative gay overture from Peter (Ashley Campbell) in the original toward the main character is gone altogether, presumably since it would now just play as just another heterosexual man making an inappropriate pass at a female friend. Such an excision might have sparked outrage for taking out a thematic strand that was taboo-shattering in the original’s time, if it weren’t for the fact that gay identity is celebrated so fulsomely by creating the Jamie-Paul vertex.

Meanwhile, the lines assigned hitherto to Jenny (Jennifer Saayeng) and David (Richard Henders) are pretty much swapped over so that David is now the “square” who doesn’t realize he’s stoned, unlike his smooth, streetwise wife. And instead of proposing that Bobbie have an affair with her, lady-of-a-certain age Joanne (Patti LuPone, on peerless form) suggests the protagonist should “make it” with Joanne’s own husband Larry (Ben Lewis), a positively polyamorous suggestion that makes this ensemble of Manhattanites seem all the more bang on trend. 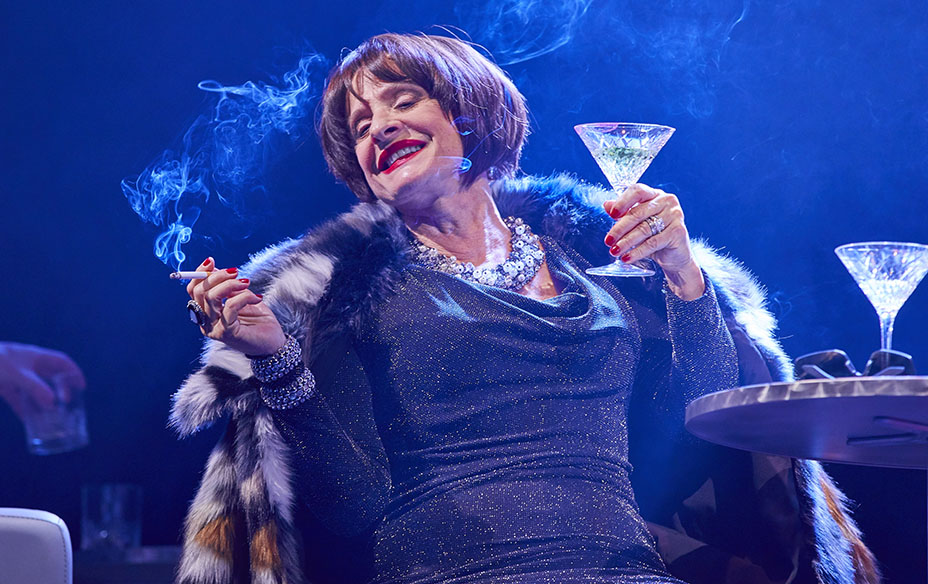 That said, although evident pains have been taken here to update the work to reflect shifting gender and identity norms, and the costumes look plausibly 2018-ish as the cast traverse the stylized, entirely gray-colored sets, lingering traces of 1970 tastes and trends remain caught in the amber of the text. Even the foods about which dieting Sarah (Mel Giedroyc, aptly enough recently the co-host of The Great British Baking Show) rhapsodizes sound markedly retro: “Mexican food with all the tabasco sauce in the world,” chili, manicotti, “baked potatoes with chives.” (Perhaps to spare Brits from bafflement, the whole Sara Lee/Eleanor Roosevelt riff is gone.)

That may seem picky to notice, but on another level the same is true of sexual politics. One can totally buy that Bobbie is a 35-year-old career woman, swiping right and left on her phone, Tinder-style, as she talks about her love life. But in this day and age, why are the men in particular so desperately keen for her to get married and settle down like them?

Moreover, in a time when people arguably are more tribal than ever, it seems a little less than credible that hipsters such as Jenny, David, Sarah and Harry (Gavin Spokes), smug parents like Susan (Daisy Maywood) and Peter, socialites like Joanne and Larry, and fashionable gay guys like Jamie and Paul would all have remained such close friends, especially in, of all places, hyper-clannish New York City. I mean, where do these people live? Upstate?

These are just minor, duff notes in a production that otherwise harmonizes remarkably well. It brims with pleasing visual gags, from the way the boxy, shifting squares of the set transform into subway cars and apartments, to the terrific illusionist’s surprise in Jamie’s big wedding angst number, “Getting Married Today.” 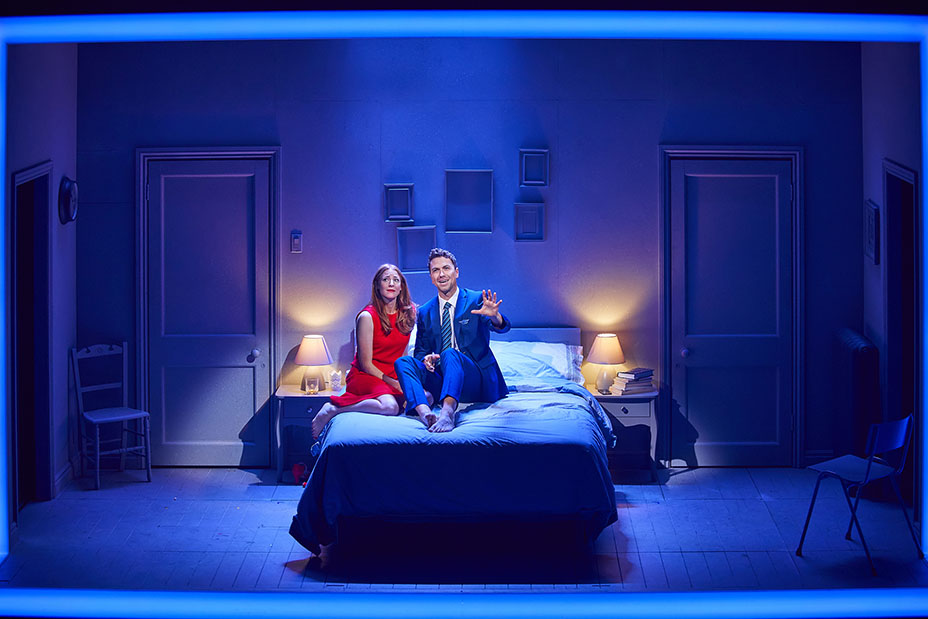 At one point, body doubles are deployed to show possible futures for Bobbie and her lovers, a coup de theatre as effective as it is simple. It’s not hard to see the bright echoes of Elliott’s Curious Incident, another production featuring a set stripped of dressing but jerry-rigged with all manner of trap-doors, hidden gizmos and intensely colored lighting that was housed for a substantial run in this very same theater.

Most importantly, the cast is a delight, perfectly synchronized throughout. Craig brings ache and depth to a role that requires her mostly to react silently, be charming and then belt out some particularly tricky numbers — especially the songs that close each act, respectively “Marry Me a Little” and “Being Alive” — from a standing start. As recompense, this will boost her career no end. Plus, she gets a chance to have mock cunnilingus performed on her by Richard Fleeshman in the role of flight attendant Andy, whose torso looks like it was designed by Tom of Finland and made on a 3D laser printer.

Word of his abs may prove almost as big a draw for certain demographics as the presence of Broadway legend LuPone here as Joanne. Reprising the part she played in 2011 for the staged concert production with the New York Philharmonic, LuPone adds some darker shades to her rendition of “The Ladies Who Lunch,” accenting the bitterness, the despair in a way quite different to the immortal Elaine Stritch rendition. LuPone’s final calls to “rise” have an angry, robotic punch that’s almost frightening, like the sound of a creature in distress. The hairs on the back of everyone’s neck are likely to respond to her command, making a fittingly rousing setup for the show’s final endgame.