Macbeth seemed like the logical next step for Corey Stoll. After all, he’s been on a roll of playing one villainous Shakespearean character per year, and after tackling Ulysses in Troilus and Cressida in 2016, Brutus in Julius Caesar in 2017 and Iago in Othello in 2018 (all as part of the Public Theater’s Shakespeare in the Park program), progressing to the role of Macbeth made perfect sense.

“There’s a couple big challenges left in Shakespeare for right now in terms of this little run I’m doing, and Macbeth is definitely one of them,” Stoll told The Hollywood Reporter. “Frankly, I was sort of fine to take a little bit more time away from theater, and especially from Shakespeare. But I got the call that John [Doyle] wanted to work with me, and I just couldn’t say no.”

Sitting in the theater at off-Broadway’s Classic Stage Company, where Macbeth runs through Dec. 15, Stoll stares out at the stage, which has been transformed into a thrust configuration, similar to stages like the Swan Theatre in Stratford from the Bard’s day. Director John Doyle sits in the opposite corner observing and quietly contemplating, as stage hands talk in the booth.

This run in Macbeth has a new element for Stoll: His wife Nadia Bowers is playing Lady Macbeth. However, the couple didn’t come as a package deal.

“I accepted the role, obviously without any preconditions,” Stoll explained. “Then we started the conversation, ‘Oh, who should play Lady Macbeth?'” His wife was doing the play Life Sucks at the time, and Stoll saw an element of the character in her performance. “I brought the idea to John, and he brought her in and read with her, so it worked out. Definitely Nadia and I had to have some conversations about ground rules, and how to leave work behind when we come home. We’ve been mostly good about that.”

Even critics who have had issues with Doyle’s minimalist staging concept had high praise for Stoll’s performance. Reviewing the production for THR, Frank Scheck wrote: “Stoll is quietly becoming one of our foremost Shakespearean actors.” He added that the casting of the actor’s real-life spouse “undeniably adds to the production’s heat.”

Stoll, 43, is also having a busy season onscreen. He was a series regular on season three of The Deuce, which just wrapped on HBO, playing a somewhat mysterious businessman who dates Maggie Gyllenhaal’s character Candy; and he also stars in the upcoming Amazon Studios film The Report, alongside Adam Driver, Annette Bening, Jon Hamm and Michael C. Hall.

The Hollywood Reporter sat down with Stoll to discuss what keeps him coming back to Shakespeare, his initial nerves about appearing opposite his wife, playing an unstable king in the age of Trump, and the opportunity of working with The Deuce creator David Simon and Gyllenhaal. 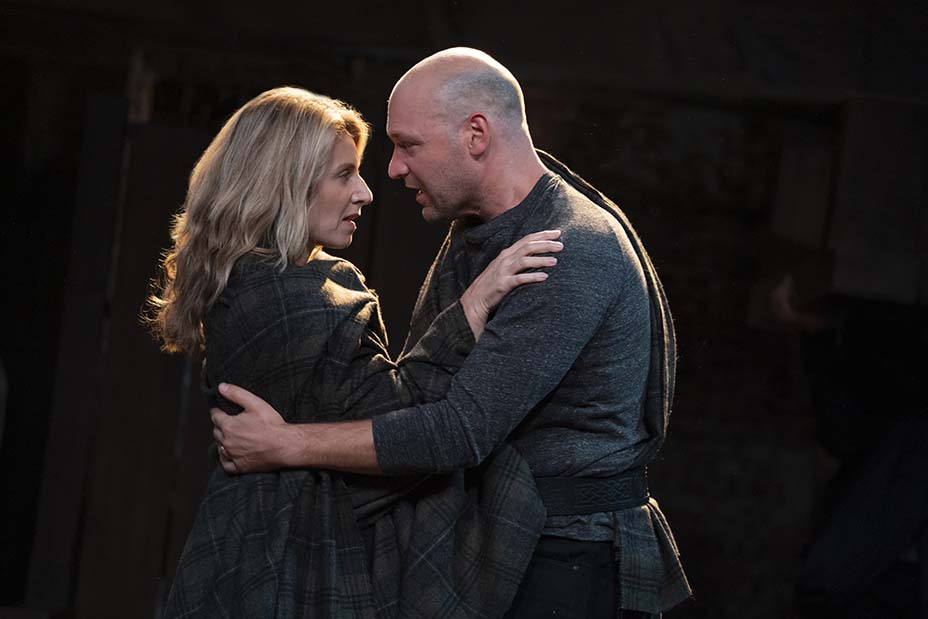 You mentioned that you’d be fine taking a break from Shakespeare, but you’ve had quite a run these past few seasons.

I didn’t think of myself as a Shakespeare actor. These last few years have been a bit of a happy surprise, and it’s been an education. I really feel like over the last four years playing these amazing roles, I’ve learned as much as I did in acting school. It’s just so much fun to do and challenging. I think it’s the closest that I’ve found to a musician playing Mozart, where the work is so transcendently good that once you get it up and running … there is this incredible sort of loss of ego that can happen in brief moments in performance, which is really, really pleasurable.

Do you feel like playing those other roles prepared you for the huge challenge of Macbeth?

All four of them are villains in a sense. Ulysses and Iago are definitely more of the conniving, murder-in-the-first-degree sort of villains, who are very aware of their villainy. Brutus and Macbeth are people with consciences and a desire to do good in the world, but who step outside of the bounds of order, as Ulysses would say. But each of those roles sort of seems like a stepping stone to the next.

You often get cast as the “villain,” but as an actor, you need to find your way into a part. Does the morally complex nature of these characters attract you as a performer?

I think somebody who is wholly one thing or the other is really not interesting to me. We’re all human. I can identify with having a conscience, very much so. But I can also very much identify with greed and envy, all these negative aspects. I think as a performer, to be able to exercise these vices or faults is incredibly liberating. It can become a kind of exorcism.

How has the experience been acting alongside your wife Nadia in this production? Had you acted together before?

She did an episode of the show The Strain that I was doing, and that was really fun. She played my love interest for the episode, and that worked out. I was a little nervous. I didn’t know how that would work, and it was really easy and great. We’ve done a few readings, but this is our first full production.

Did you work on the text together either before or outside of rehearsals?

No, not really. We started reading through it together. We read it through a few times, and it just didn’t feel right. It just felt like this is the kind of work that should happen with a director in the room. I think that just makes everything easier when there is a third party, an authority figure. I think it is important for actors to sort of feel that there is an authority in the room. 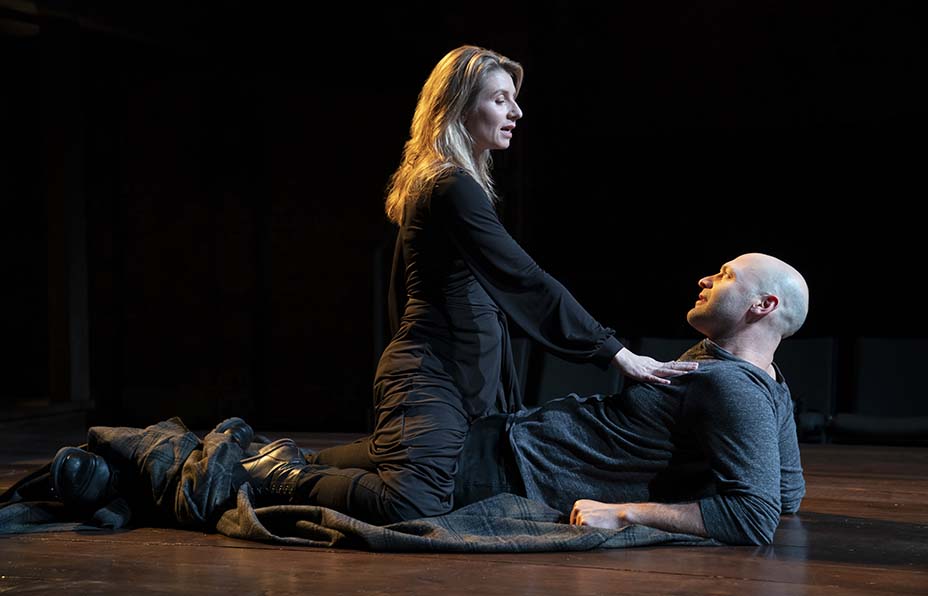 Macbeth and his wife have an extremely complex relationship. It’s very different from the young love portrayed in Romeo and Juliet, for example. What is it like to explore that relationship with your partner?

It’s always so intense when you’re playing a couple with a person who is, at least in the beginning of the process, usually a stranger. You have to do a lot of work to create this intimacy — or at least the facsimile of intimacy. Obviously, that was not something that we had to spend any time doing. We found ourselves actually looking at each other less than I think we would have if we were working with strangers.

Macbeth is obviously a timeless story, but it feels particularly relevant in today’s political climate. Any thoughts on performing the play right now?

All these plays are so great. At any time, there are incredible resonances. There are times where I’m like, “Oh, well, you know, Macbeth is totally Trump. No, no. He’s not Trump. He’s the Republicans, and then Trump is the witches.” It’s so much deeper than that. Definitely living in a time where the most powerful person in the world is unstable and driven by insecurities and hatred is a scary thing. It’s a destabilizing thing for everybody on a deep, personal level, aside from how it’s shaking up political parties or economic realities. Regardless of how you feel about his policies, just the state of having such a chaotic and insecure leader is deeply troubling for people’s psyches, and that feels very resonant in this play.

You also had a significant arc on The Deuce this season. Did you watch the show?

Yeah, I loved it. I think David Simon is incredible. He’s one of the people who’s responsible for this golden age of television. The offer just came out of nowhere. There was no material for me to really read, but Maggie [Gyllenhaal] actually called me and told me about it. Then I talked to David. I was like, “I normally wouldn’t do something like this sight unseen.” But I just would have kicked myself to go through a whole career and have an opportunity to work with David and with Maggie, and to pass it up.

You play her character’s love interest. How was it building that rapport together?

She’s already had two seasons, and I’m sort of coming in. It’s not a huge amount of screen time to tell the story, yet we need to be a believable couple. She’s just so game. She’s so dedicated to the show. I think she really feels that the show is really important and special. We just met a few times, and just really tried to deepen this relationship as much as possible.

Do you watch the episodes as they come out?

I haven’t watched this. Honestly, every year, I find it harder to watch myself as an actor. It’s not my favorite thing to do. So much of the job is about this split awareness. You need to get on stage, you need to speak loudly enough to be heard and clearly enough to be heard, and you need to stand in a way so people can see you. There are certain conceits to reality, and even in film, your movements need to be consistent from angle to angle. You have to have some outward awareness, but you have to find that sweet spot between being self-aware and self-conscious. The more I watch myself onscreen, the more self-conscious I get.

You also have The Report coming out next month, which explores the CIA’s post-9/11 interrogation practices. You’ve done a lot of political shows, from Homeland to House of Cards — what attracts you to this genre?

I think it attracts me as a viewer. Just like with The Deuce, that was a show that I saw and I loved. I’ve definitely done a lot of things that I wouldn’t necessarily watch myself. Not to say that they aren’t of good quality, but some stuff is just not genres that I’m particularly engaged with. But when I get the opportunity to work with great people on something that I would really love to watch as a viewer, that’s an exciting thing to do. Now that I have a 4-year-old, I hope I can do more things that are a little bit more family-friendly, but that doesn’t seem to be the kind of thing I tend to get cast in.