With the 91st annual Academy Awards fast approaching on Feb. 24, Fashion Institute of Design and Merchandising (FIDM) Museum is honoring costume designers (including all five Oscar nominees for costume design) at their 27th annual “Art of Motion Picture Costume Design” exhibition that was unveiled Saturday, Feb. 2 at a private party at the museum gallery in downtown L.A.

Open to the public from Tuesday, Feb. 5 through April 12, the show highlights over 100 costumes from more than 25 feature films, including those by Oscar nominees Mary Zophres (The Ballad Of Buster Scruggs), Ruth E. Carter (Black Panther), Sandy Powell (The Favourite and Mary Poppins Returns) and Alexandra Byrne (Mary Queen of Scots).

“The thing about the exhibit that’s so great is that you see the [costumes] how they’re meant to be seen on screen. You get to enjoy all of the details,” FIDM curator Kevin Jones told The Hollywood Reporter during the preview. “There are very few films panning the actor from feet to hat!”

Nearby was Zophres, who brought to light some of the overlooked elements of costume design–specifically, the importance of inclusion through factual representation, as seen in her work dressing Native Americans for The Ballad of Buster Scruggs.

“I told Joel and Ethan [Coen] that ‘the politically correct police are going to be after you [if] you don’t put it into context’” she said of the chapters ‘Near Algodones’ and ‘The Gal Who Got Rattled’ that feature indigenous peoples. “I felt this great responsibility to get it right and not use any tropes that have ever been used before. It was not only making it accurate, but it’s a story that we’re telling within six movies; you want to have those two tribes of Native Americans look dramatically different. So it was, ‘Where can I find the accurate research and accurate information?’”

Zophres amped up her historical research and noticed 19th century painter George Catlin: “All he wanted to do was sort of capture their traditions,” she said. “He stayed at a distance, so there’s an element of Impressionistic quality to them because he was trying to get it down fast. I was fascinated with those paintings and I thought that was the most accurate portrayal that would give me an idea of what the Sioux were wearing in those days.”

She continued, “You go down that hole of research and you don’t want to ever come out. My department spent an extraordinary amount of time on it. We made every single item. We made every single feather. We did similar paintings [directly] on the legs of these Native Americans in the film [for the stuntmen]. Talk about high fashion, in just a really different way.”

Also on the scene was Carter, who wore a dress by Nigerian-born designer Duro Olowu and reminisced about her personal journey of only recently finding visibility within the industry. “I went back and forth for ten years between L.A. and New York doing independent films with Robert Townsend, Keenen Ivory Wayans and Spike Lee; it was the beginning of a lot of black films,” she said. “I don’t think the industry was really able to embrace the independent films [then]. Do the Right Thing won an Oscar nomination for writing, but I just kind of had the feeling for a long time, people don’t go see my films. And now, Black Panther has put my films back on a pedestal to examine my whole body of work, which is kind of nice. It’s nice to be asked about Selma and Marshall that I didn’t get to talk about when they came out because a lot of people didn’t go see them.” 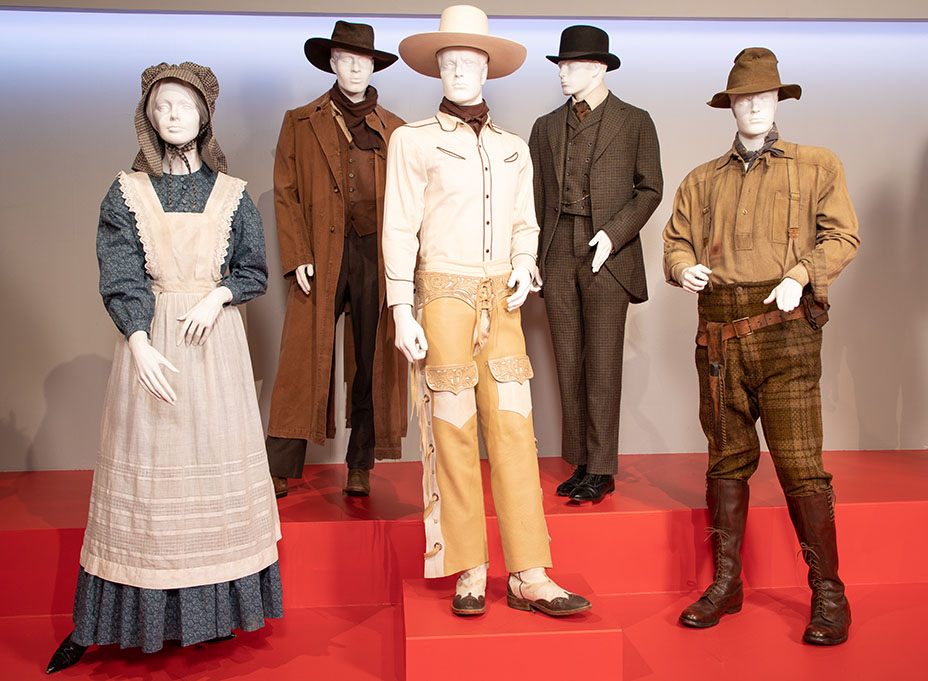 As for her Oscar nomination: “As a black woman being nominated, [this] means I’m paving the way for others. To be with these women means I’m the dark horse. I’m the one who pulled myself up from my bootstraps, learned how to do this and worked hard. Not to say that they didn’t, but I think all of them have a few Oscars between them. I’ve been at this for so long. I love this profession. This means that the Academy, which through its membership became much more diverse last year, is rooting for me in this way.”

With the ceremony nearing, both nominees are working on their day-of fashion look. “I haven’t had my fitting yet,” Carter said. “But it’s a dress that’s going to be following me and it does include a special neck piece.”

And Zophres revealed that her sketch is in the process of coming to life. “It’s red and it’s silk wool,” she said. “It’s got a nice weight to it. It’s being made by the same gentleman who made a dress that’s on display tonight [for The Ballad of Buster Scruggs], Jose Bello. He’s a very good cutter at Western Costume [Company]. I find it very nerve-wrecking; it’s all happened so fast!”