“It feels good to do good, and it’s also good for business, because we live in a time when advocating for your beliefs and values is what’s relevant today; that’s why Arianne and I founded RAD [Red Carpet Advocacy agency],” said Carineh Martin, the business partner of Hollywood costume designer Arianne Phillips, at a discussion on the subject earlier this week. “The [term] ‘red carpet’ is really figurative; it stands for any major global platform.”

Phillips elaborated, “It was basically this conversation I’ve had throughout my career, where people want to collaborate on a line of clothes for the obvious things, commercialization and the monetary value of my platform. I work with a lot of very wealthy people. I work in a privileged business. And I watch a lot of antiquated philanthropy, from galas to ridiculous old models of shopping events where 10 percent goes to a charity, these inauthentic things.”

The duo invited an intimate group of friends to the fifth floor of Artist’s Lounge at h Club, the private London-based social club that has opened on Vine Street in Los Angeles. The crux of the gathering was the first of a series of panels focused on social entrepreneurship, entitled “RAD Presents: The Relationship Between Platform and Purpose.” 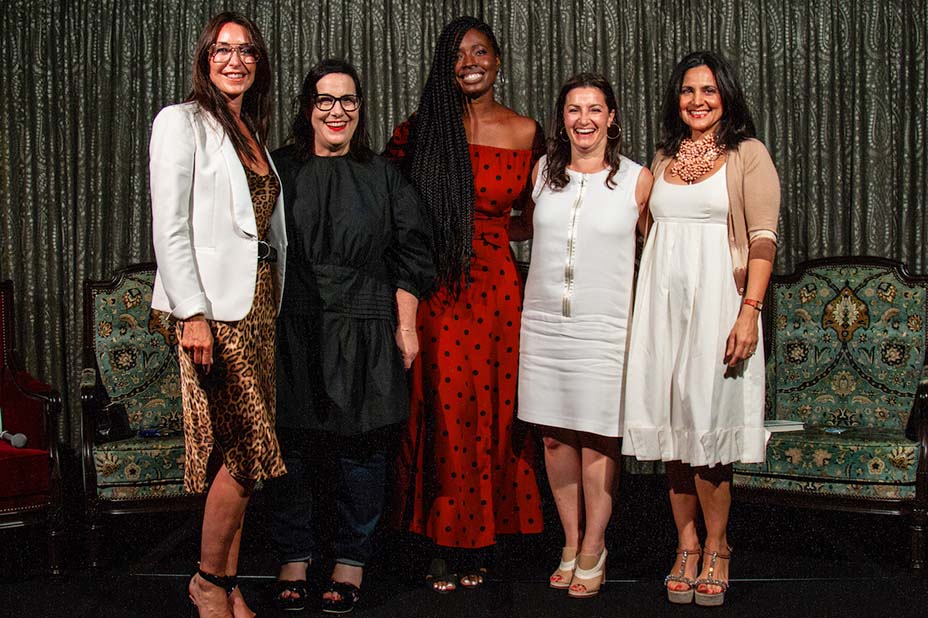 Moderated by Erica Williams Simon, podcast host and former head of the Creator’s Lab at Snapchat, the talk also included footwear designer, social activist and Jimmy Choo co-founder Tamara Mellon, who has championed reproductive rights, equal pay for women and more, and Participant Media marketing president Christina Kounelias, who helps to facilitate meaningful follow-through for her company’s mission of social change (e.g., the Roma campaign to focus attention on the first National Domestic Workers Bill of Rights, and the role of A Fantastic Woman in promoting gender identity legislation in Chile).

Founded by Jeff Skoll in 2004, Participant Media is “literally built on the premise of entertainment that drives social change,” said Kounelias. “Jeff’s premise is that people are intrinsically good, and when you give them an opportunity to do good and take a path forward, they will choose that.”

Yesterday was a historic day for domestic workers across the country as a National #DomesticWorkersBillofRights was introduced in Congress! We are honored to stand with our partners @domesticworkers, representatives and advocates as they drive institutional change to give workers the rights and respect they deserve.

In terms of measuring impact, Kounelias said National Domestic Workers Alliance director Ai-jen Poo told her that the attention Roma brought to domestic workers “accelerated her work by 10 years in terms of funds raised and awareness to the bill of rights.”

Mellon, who co-founded Jimmy Choo in 1997 at age 27, confessed that her exit from the company was because “I’d lost my voice.” She added, “We were selling to women, and I felt that we weren’t talking to women in the right way. So I left, I cashed out, and started a new brand under my own name with a completely different business model that talked about things I really cared about: women’s issues, equal pay, health and wellness [the company has sponsored a set number of free mammograms during Breast Cancer Awareness Month in October]. I thought, if we’re going to spend marketing dollars, why don’t we spend them somewhere that our customers can share our values? We realized that millennials and Gen Z don’t want to buy a brand where their association is just by status; they want association by shared values.”

Non-shitty news alert. Today is #WomensEqualityDay, which commemorates the adoption of the Nineteenth Amendment in 1920— granting women the right to vote. Now, the fight for equal rights continues. Earlier this year, the House passed the Paycheck Fairness Act, marking another step towards ensuring equal pay for equal work. In order to give this bill momentum in the Senate, we’ve made it easy for you to email your Senators and advocate for the Paycheck Fairness Act. Text TMEQUALPAY to 52886 or tap the link in our bio to take action. #tmequalpay

Phillips said the authentic commitment to activism of Madonna, a client of hers for 22 years, was a driving inspiration for her. “She has built schools and a hospital and surgery unit in Malawi, Africa. But every time she invited me to go and volunteer with her family, I was running off to go do a movie. So I was constantly feeling like I didn’t have the time to have philanthropic or cause-oriented experiences. I didn’t have time to join a charity. I was feeling impotent, really, in terms of giving back. The only way I felt like I could be sustainable in my job in this world, as the world kind of went to hell after the [2016] election, was using what I do for good.”

After RAD was in development, Phillips designed the original Time’s Up pin, almost by happenstance. “I got invited into one of the early Time’s Up programs. I didn’t know what I was going to,” she said. “An agent friend of mine at CAA said to come to CAA on a Sunday. I really had no idea and just got off a plane from London and went into that room. And the fortuitous thing that happened for me is Reese Witherspoon said, ‘Oh, everyone’s going to wear black at the Golden Globes, and we would like a pin for the men to wear. Can you design a pin?’ And I was like, ‘I can do that! That’s my skill set.’ And by a series of crazy things, that ended up becoming the logo. It was [almost] by default.”

Martin emphasized how the inroads to consumers have shifted. “Unfortunately, fashion magazines are becoming more antiquated. The way we all have platforms now, we can all speak to our audiences, and talent certainly does. Talent is always selling something, right? They’re selling product; they’re selling a film. And we say to them, ‘Just talk about what’s really meaningful to you from a cause perspective. Your fans are going to care. In fact, they’re going to connect with you in a deeper, more emotional, way. And that’s only going to help your film!'”

As for the “OG advocate,” Mark Ruffalo wins hands-down (according to panel shout-outs) with 16.4 million followers on Instagram, where his feed merges project- and cause-oriented posts. In the current Participant Media project, the Todd Haynes film Dark Waters, due out on Nov. 22, Ruffalo stars as a corporate defense attorney who goes after a chemical company with a long history of pollution.

Launched in January, RAD aims to advocate for social progress on the red carpet and beyond by bringing together talent, stylists and brands to raise funding and awareness for charities. In July, the group partnered with Levi’s and Margot Robbie, with whom Phillips worked on Once Upon a Time In Hollywood, for a contribution by the denim brand, featured prominently in the film, to Robbie’s favorite charity, Australia-based Youngcare, which supports young people living with disabilities.

Thank you @levis for standing with Margot Robbie , Austin Butler & RAD by making a generous donation @youngcareoz that will help better the lives of youth with disabilities by providing housing and private care . We are so thrilled to be able to celebrate @onceinhollywood coming together to do some good #doradberad SEE LINK in bio to learn more about @youngcareoz @margotrobbie @austinbutler ……………………. #repost @levis ??? Tonight we were lucky enough to host a dinner with @doradberad to benefit @youngcareoz and toast the upcoming release of @onceinhollywood. Swipe to see who we celebrated with. #doradberad

RAD initially partnered with Hollywood stylist Karla Welch and two of her clients —The Handmaid’s Tale star Elisabeth Moss at the Golden Globes, where all the designers she wore (including Mellon) contributed to the American Civil Liberties Union, and Camila Cabello at the Grammys, where Armani Prive contributed to Save the Children. Tracee Ellis Ross, Mandy Moore, Olivia Wilde, Elizabeth Banks and Patricia Arquette have also teamed up with the organization at awards shows and film-oriented events.

“My work with RAD has underscored that I’m finding our tribe in the industry, and kind of across the aisle, having conversations with talent that I haven’t had before,” says Phillips. “We’re going through a cultural shift right now. We’re hearing it on the news, with companies from Victoria’s Secret to Soul Cycle who are pleasing their shareholders and not communicating values that matter to the customer. So I feel really lucky to be part of this conversation!”