Continue to The Hollywood Reporter SKIP AD
You will be redirected back to your article in seconds
Skip to main content
February 17, 2017 3:48pm

You could say that Cover Girl spokesperson James Charles — the beauty brand’s first male ambassador — has been having a day that’s anything but easy and breezy.

The 17-year-old came under fire Friday after he tweeted a two-line conversation: “‘I can’t believe we’re going to Africa today omg what if we get Ebola?’ ‘James we’re fine we could’ve gotten it at chipotle last year.'”

The tweet, presumably meant as a joke, was followed by the upside-down smiley face emoji. He later explained that he was making fun of a friend who confused the deadly viral epidemic Ebola with the often foodborne bacterial infection E. coli, which had a widespread breakout at a number of Chipotle restaurants last year. 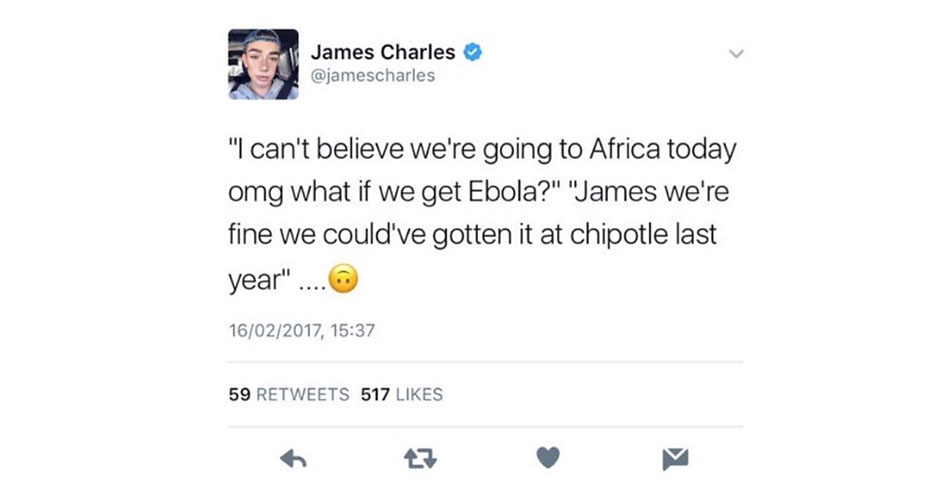 Reactions to the tweet were immediate, with many calling out the beauty vlogger with a combined 1.68 million Twitter and Insta followers for his ignorant remark, which some claimed insinuated that all people associated with the continent have the deadly disease. “Wouldn’t it be hilarious if someone said all gay men have AIDS to him??” wrote one user.

In the immediate aftermath, followers on Twitter claimed that Charles blocked enraged fans and told others to “stop being so offended.” However a few hours later, he issued an apology. “Regardless of my intentions, words have consequences,” he wrote. “I take full responsibility and will learn to do better.”

I am extremely sorry. Regardless of my intentions, words have consequences. I take full responsibility and will learn and do better.

He followed up the statement with a screen shot of a note in which he further explained his remorse. “I am extremely sorry for my tweet and I feel like shit for saying it,” he wrote. “I am traveling to Africa with a few friends for a school trip, ironically enough, it’s an educational trip because we all know very little about the country but are eager to learn.”

He continued, “As a white cis male i recognize my privilege and would never want to take that for granted, but I f–ked up… I understand why what I said was offensive and ignorant.”

The apologies then sparked yet another debate on the social media platform about whether or not Charles’ remarks were sincere. “You’re only sorry because you got caught,” and “apology declined,” were common reactions.

Regardless of Charles’ intentions, the ordeal illustrates the pitfalls that can result when multibillion-dollar brands such as Cover Girl hire young, untested, unfiltered social media stars to reach their thousands (sometimes millions) of followers and potential customers. They simultaneously run the risk of a potential gaff being seen by those very same followers — many of whom hang on every word out of their idols’ mouths (or keyboards, as it were).

When Charles was announced as Cover Girl’s first male ambassador — a groundbreaking move on Cover Girl’s part, and one which launched a trend of male beauty spokespeople — he sat down for an interview with The Hollywood Reporter. At the time, it was easy to see why the high schooler had become such a star on social media and YouTube; his charisma, humor, not to mention his contouring skills, shone on camera. He conducted himself with a sense of maturity that made my jaw drop when I learned he had just turned 17.

But when the cameras stopped rolling, he was still just a teenager being ushered back and forth by his mom as well as a team of Cover Girl handlers, who were as protective as a fleet of angry mama bears worried about their young cub.

Without his humorous social media presence, it would be difficult to say whether Charles would be as popular as he is. Some tweets are admittedly hilarious even to someone outside of his high school-age demographic. (“So excited for Gaga’s concert today!” reads one tweet from Super Bowl Sunday. “I just wished she picked better opening acts, like I’ve never heard of the Patriots or the Falcons.”) Finding the balance between a genuine personality and one with a bit more of a filter remains the ultimate challenge.