Jimmy O. Yang is showing a new side in Crazy Rich Asians.

Yang plays Bernard Tai, an obnoxious playboy who throws a bachelor party for friend Colin Khoo (Chris Pang) and steals the show just before the wedding ceremony, making the moment about himself rather than the groom. “Congrats, man. Don’t let her take your balls,” he says before punching his friend (“as a joke!”) right before the wedding starts.

“That scene was completely improvised and it turned out to be a real fun thing,” Yang tells The Hollywood Reporter.

Crazy Rich Asians is the first studio movie featuring an all-Westernized Asian cast in 25 years and centers on the love story between Rachel Chu (Constance Wu) and Nick Young (Henry Golding). The ensemble nature of the film allows actors like Yang to step into the forefront for certain scenes and then step back.

“I was happy to be that sixth man off the bench. I just hit a three when I come in and it was pretty fun,” says Yang.

Yang is known for playing Jian-Yang in HBO’s Silicon Valley, which saw him step out on his own for the most recent season following the exit of star T.J. Miller, whose character Erlich Bachman had been paired with Jian-Yang. In a conversation with THR, Yang talks about his Silicon Valley future, selling cars as a young man and finding a new family with Crazy Rich Asians.

In addition to being a strip club DJ, one of your early jobs was car salesman. What did you learn from that experience?

The thing is you don’t need to know anything about cars, you’ve just got to act like you know something about cars. I became a pretty dang good car salesman, because I don’t necessarily look like your prototypical car salesman, so I look just like a nice innocent kid, especially at that time, I was 21, 22. People just trusted me and went along with it. I wasn’t trying to screw them over. It was just, “OK, you want this car? I’ve got a trustworthy face. You can either buy it from me or you can buy it from that shady guy on the other lot.”

Did you make good money doing that, especially for where you were in life at the time?

Back then, yeah, I scraped by for what it was. I was happy to get an occasional $200 cash. There were some commissions and stuff. It was a fun time, but I don’t think I would do that now.

You had your biggest season of Silicon Valley yet. What did you think about where Jian-Yang ends up at the end of this season?

The whole arc was great. By episode two or three, people are like, “Oh my God, this guy is such an asshole. I can’t root for him anymore.” But it’s great. We took him on this route and he really crumbles in the end and gets screwed over and has nothing left. So there’s some redeeming factors. It’s a really good up-and-down arc this year. He was stuck in Macau playing roulette and he lost all his money. He said, “I just want to come home.” I thought there was something so sweet about that because this dude is an immigrant. His home, not so many years ago, was China. Now when he says he wants to come home, he wants to go back to America and he considered it home. So in that sense, me being an immigrant, there’s something sweet about that. At the same time, I’m glad to see where we take it and I’m happy to see him getting back into the mix. Maybe he’ll actually work with the boys this time. But I don’t know, I guess we’ll see.

Have you had any conversations with Silicon Valley creator Mike Judge about what’s coming next?

I don’t know anything. Honestly, I wish I did. It’s going to be fun. They keep finding new life in the show and it’s so current, even with the whole Bitcoin episode.

You’ve talked about how Silicon Valley is great, but you found more of a family with Crazy Rich Asians. What were some of those differences?

I love everyone on Silicon Valley. These are comedy royalty and we all get along.… But something about Crazy Rich Asians, the fact that usually I’m the only Asian dude on set. But with Crazy Rich, it’s just us hanging out in the lobby in Singapore or every day on set it was the most talented, beautiful Asian people from different parts of the world. We’ve got two Australian-Asian actors, British-Asian, Singaporian-Asian, American-Asians. I felt like I found my creed, really. Everyone came from these different walks of life or different parts of the world, but we all share the same culture. We all share the same struggle, where maybe our parents wish that we didn’t become actors. We all love the same food. We all greeted each other’s elders like uncle, aunty. We kind of live by the same rules in a way. I didn’t have to explain to anyone what kind of Chinese food this is. Everybody just loves food and we went to karaoke every night. Silicon Valley is an amazingly talented cast and a well-written show.… Crazy Rich Asians I felt there was something personally special to me.

You’ve said a nightmare scenario for you is that 20 years from now, Silicon Valley is the only thing you are known for, because that’d mean you didn’t get to do much else. Do you feel like Crazy Rich Asians is the start of something new for you?

I sure hope so. People are getting really excited about it. I was doing stand-up at the Improv and when the host introduces you, “OK, the next comedian, you’ve seen him on Silicon Valley.” People always clap. They really watch the show and they are fans of it. And then they said, “You are also going to see him in Crazy Rich Asians,” and I did not expect this, but the applause was even louder. People are excited about this. This will also be part of the legacy, but at the end, who cares about legacy. I just want to keep working and have a roof over my head. 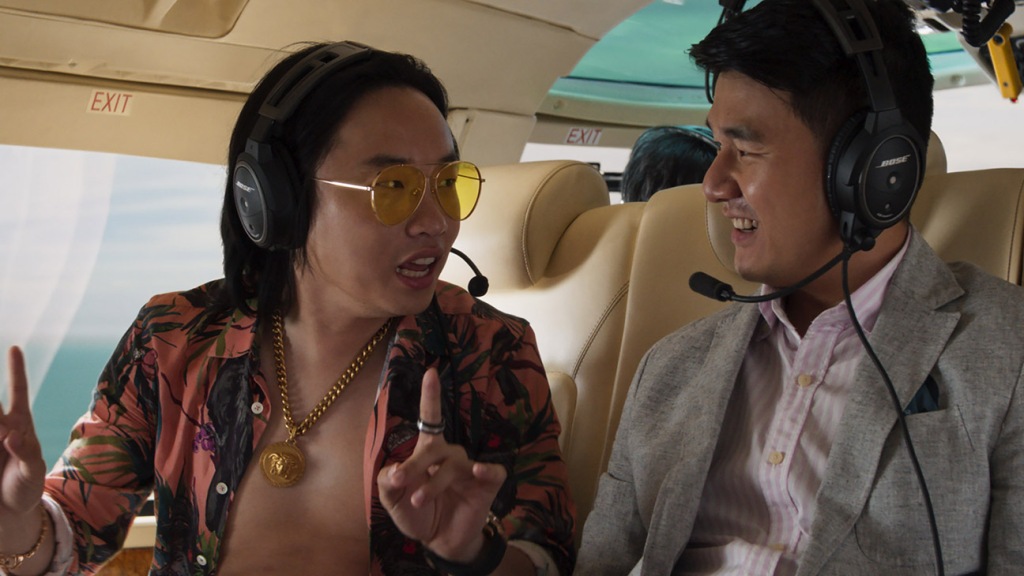 Your character got to throw a bachelor party on a boat, which involved you holding some kind of giant gun. What do you remember from that?

It was a real-life military-grade rocket launcher that weighed like 50 pounds. There’s no padding on these rocket launchers. My shoulder was basically bleeding out the next day and we are shooting in 115-degree Malaysian heat. It was a tough day but it was so fun. You can tell, it shows. We’re just having a great, good old time on that set and it’s an incredible set. It’s on a cargo ship that our set designer Nelson Coates built in an empty parking lot. It’s completely functional with a helipad and everything. It’s incredible.

What will you do opening weekend?

I’m going to get some tickets for my friends and stuff like that and invite everyone. Sneak in a couple of theaters. Tonight [the interview was conducted Aug. 7) is our premiere and they are going to watch the movie for the first time. I want to see their reaction and see how much fun people are having and that, sometimes, is better than me enjoying the movie myself.

You’ve said your parents didn’t want you to be an actor. Do they now accept it?

Once you are in that Chinese newspaper, that’s when they know you’ve made it. I had a candid sit-down with my dad the other day and he said, “Of course I’m proud of you. I was just worried. Now you are stable.” That’s all they want. I’m not homeless.

THR has asked your castmates what they did with their first big paychecks. How about you?

I’m not a guy with expensive taste but I have to blame this on [Crazy Rich Asians author] Kevin Kwan. He turned me onto watches and stuff like that. One of my first big paychecks, I used it to buy a Rolex. I bought a used 1968 vintage Rolex. I was too cheap to buy a new one. It was fun. I wear it all the time. Kevin is a man of taste. So he has introduced me to a lot of nice things in life. It’s great, but I have less money in my bank account now.

For more from Crazy Rich Asians, read THR‘s cover story about the making of the film.