Riding the high of winning three weekends straight at the box office with his rom-com Crazy Rich Asians, Henry Golding was all smiles Wednesday night at the Park Avenue Armory.

The actor came out for his first Tom Ford runway show, wearing a white suit not unlike the Gatsby-esque one he dons in a memorable party scene at Tyersall Park in the film. 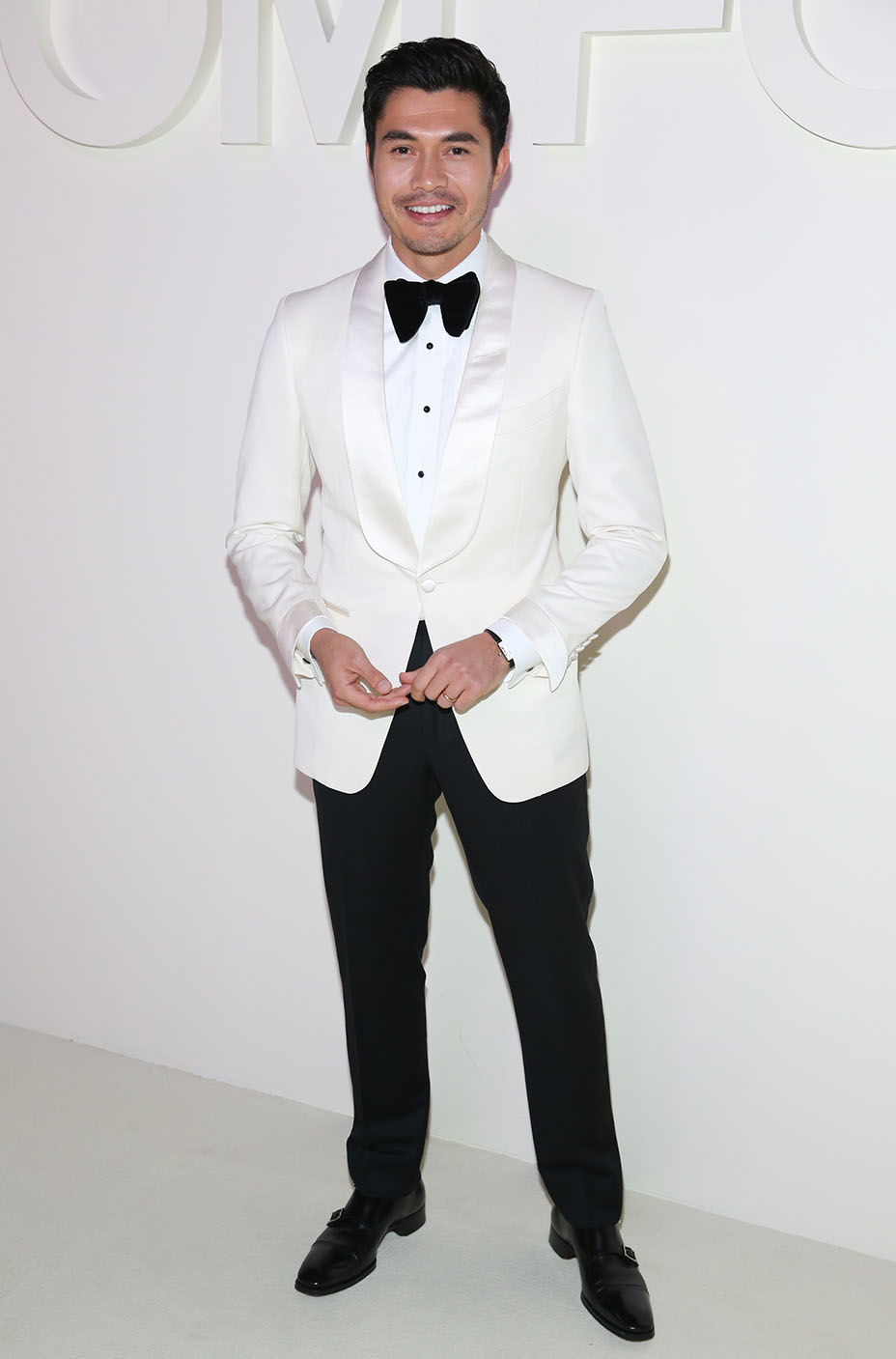 “He is the pinnacle of men’s designers, the godfather of tuxedos, evening wear and casual wear,” Golding told THR of Ford, who dressed him in an ice blue tuxedo for the Crazy Rich Asians premiere in Los Angeles. “It was a statement, for being a big Asian movie, to have an Asian leading man being dressed by the biggest menswear designer in the world who only dresses A-list stars. I was so happy and so lucky.” 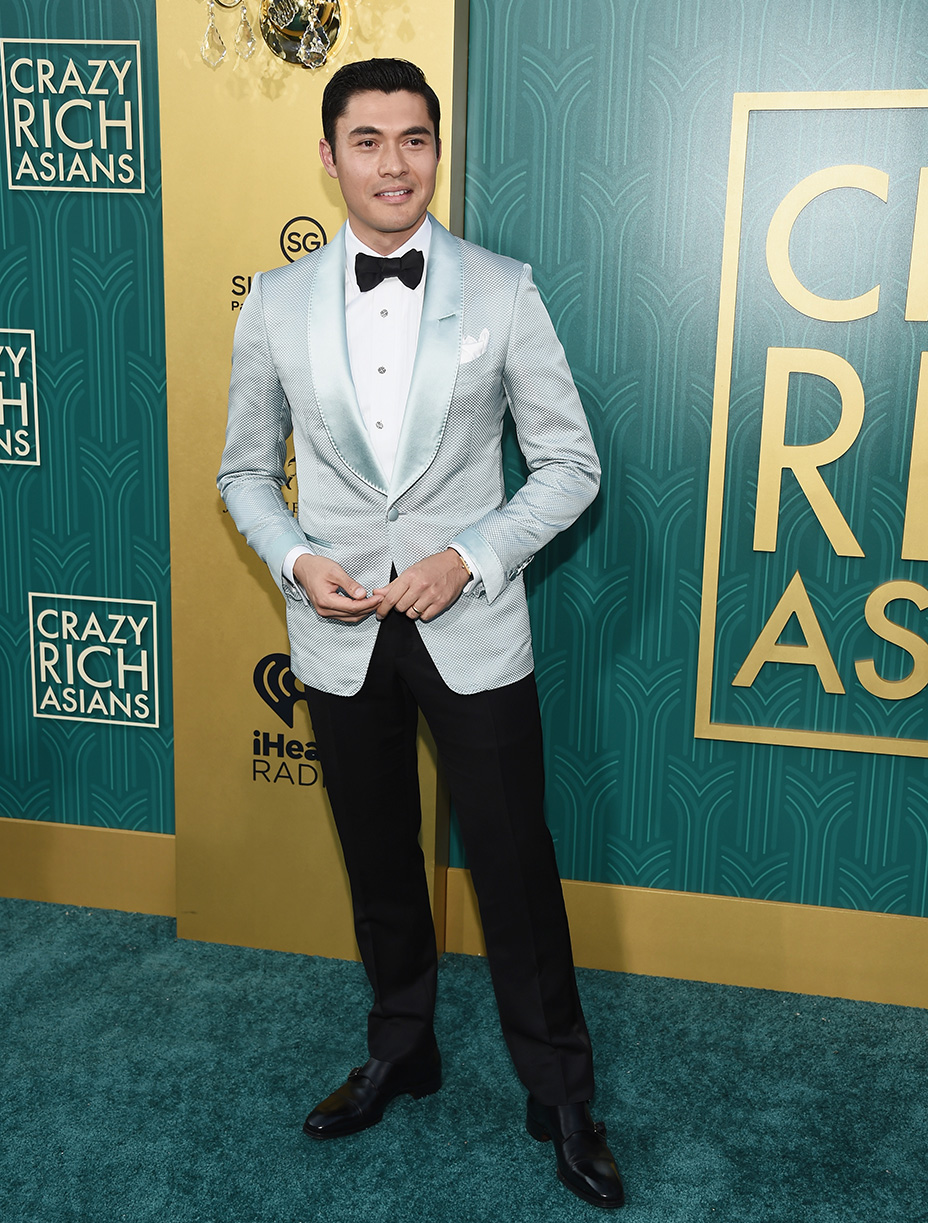 Next up, Golding appears alongside Blake Lively in Paul Feig’s A Simple Favor, opening Sept. 14. “It’s such a contrast, but fun,” he says of the suburban noir whodunit. 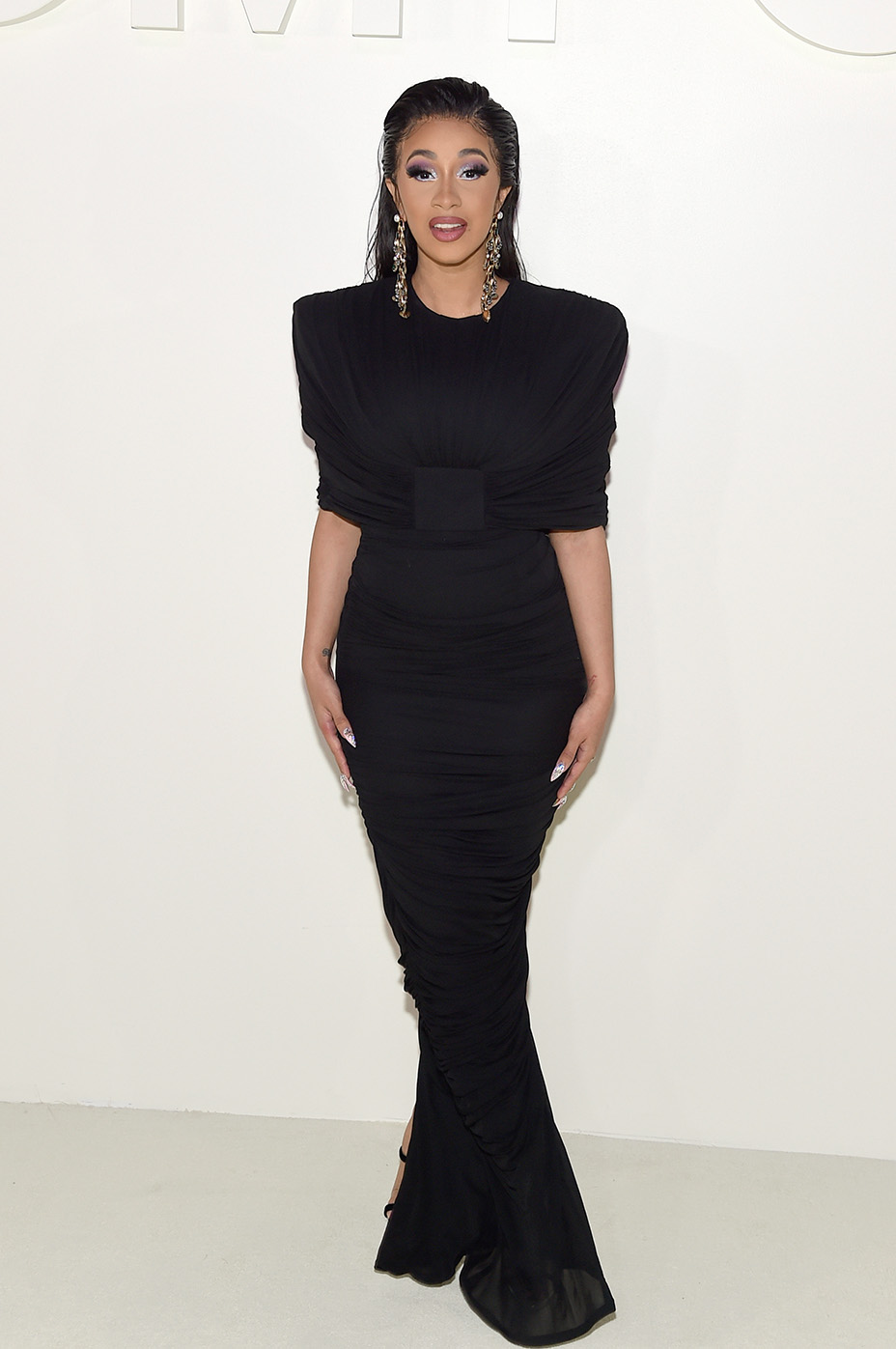 New mum Cardi B also showed up for Ford’s spring 2019 collection debut, as did Tom Hanks and Rita Wilson and Gina Gershon. 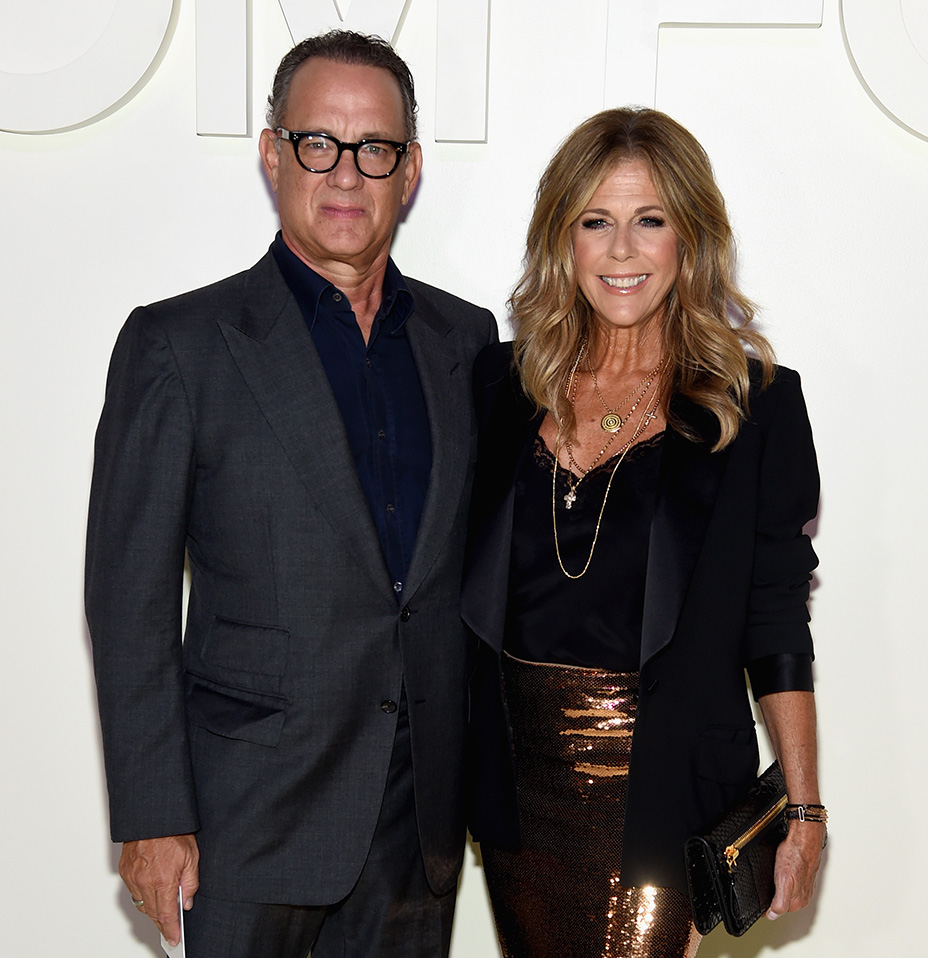 The men’s and women’s lineup was back-to-basics, Tom Ford style, with rich materials, neutral colors, sharp tailoring and goddess gowns striking a nostalgic chord that has worked well to boost business for other luxury brands recently, including Prada. Most of it will look familiar to fans who have followed Ford from his Gucci and Yves Saint Laurent days, and could be a welcome return for those who have been disillusioned by the more brash styling of his recent outings.

“I always begin each collection as a reaction to the previous season. I feel that fashion has somehow lost it’s way a bit and it is easy for all of us to be swept up in trends that have lost touch with what women and men want to actually wear. So I did not want to make clothes that were ironic, or clever but simply clothes that were beautiful,” he said in the show notes.

Back to basics, @tomford style #nyfw

In contrast to his fall 2018 collection of riotous neon colors and 1980s animal prints, this season was dominated by a soft color palette, with powdery-hue, lace-edge slips balanced with glossy crocodile, curve-hugging blazers and buttery leather bomber jackets. (Ford is one of many designers to have recently ditched fur in the name of sustainability, and some of the croc he used here was faux for animal-conscious pals like Paris Jackson, who was seated front row.)

Ford’s penchant for vulgarity (remember the Gucci logo-shaped pubic hair advertising image?) and shock value (the pasties worn by Rihanna?) was toned down to a romantic sensuality, with plenty of metallic jacquard evening jackets for leading men like Golding. It was high glamour, sure, but this wasn’t punishing fashion, there were elastic insets on the sides of those pencil skirts, so women could actually move. 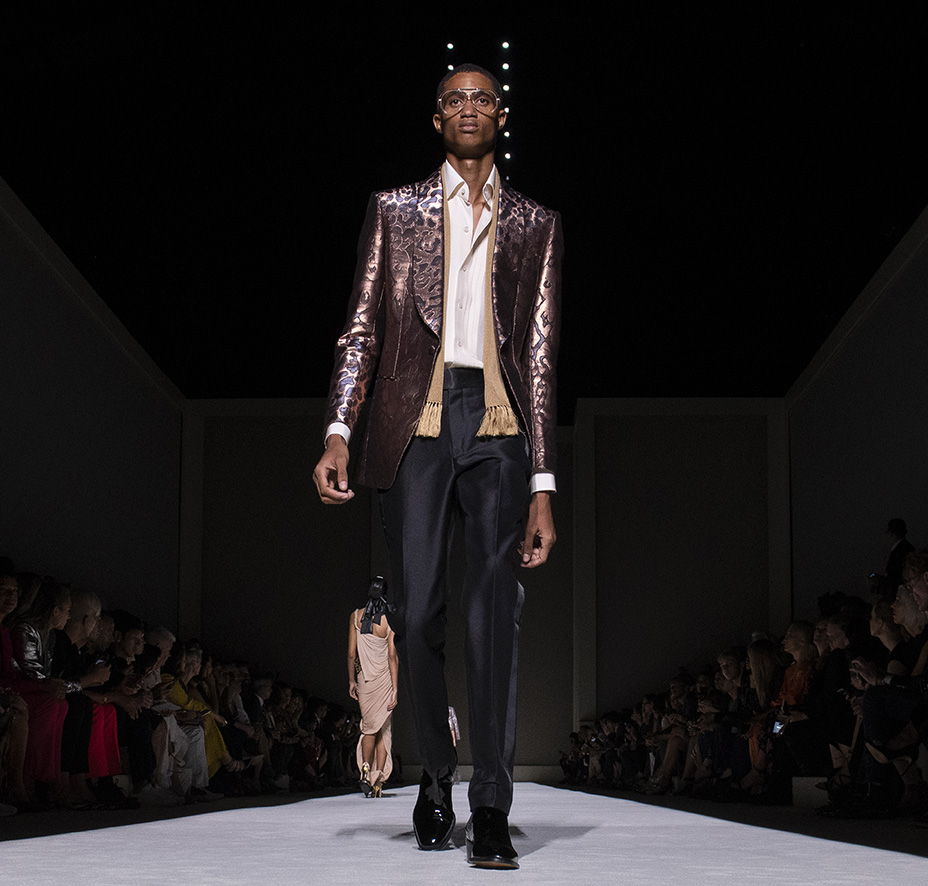 And there was some California ease, too, from the L.A.-based Ford. The ’90s-era wife-beater made a comeback on the runway (isn’t it about time we rename that style?). But, tucked into a ruched, knee-length pencil skirt, it looked downright innocent, revealing dewy sun-kissed shoulders that can no doubt be achieved with the designer’s latest beauty product. 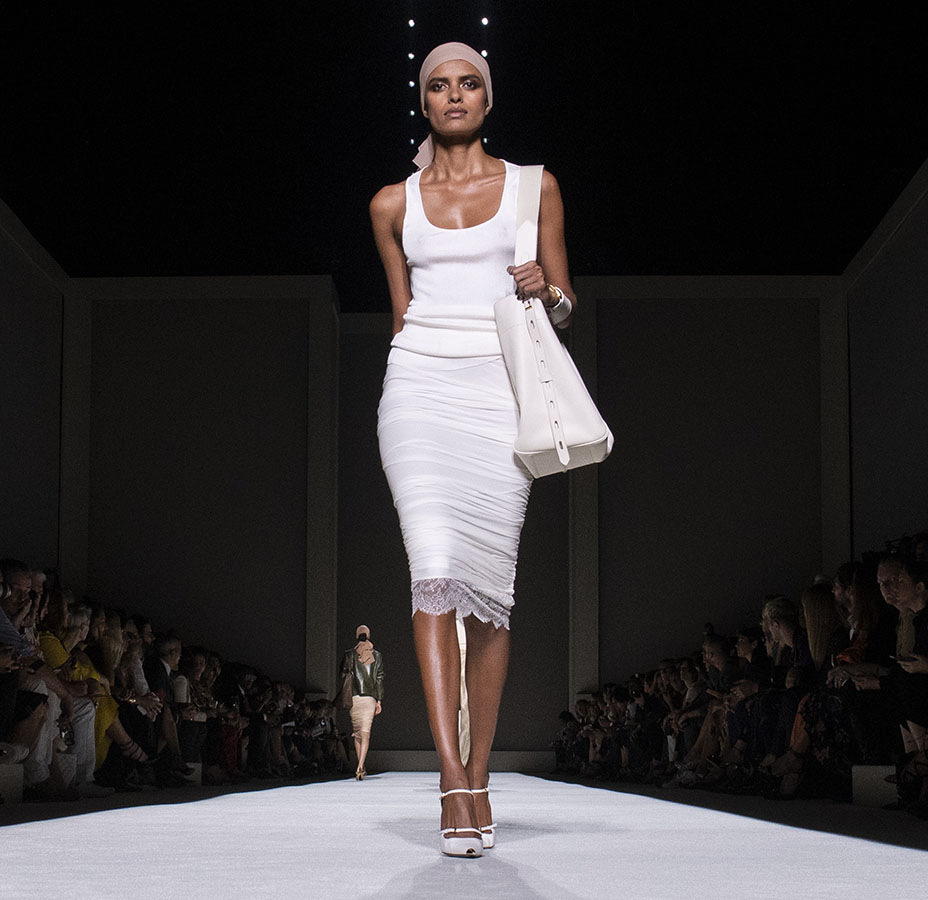 For evening, diaphanous dresses, some swaying with silk thread, were anchored by leather corset belts or molded biker jackets. A standout blush gown worn by Jourdan Dunn, was topped with an animal-print jacket for a fierce but feminine look. 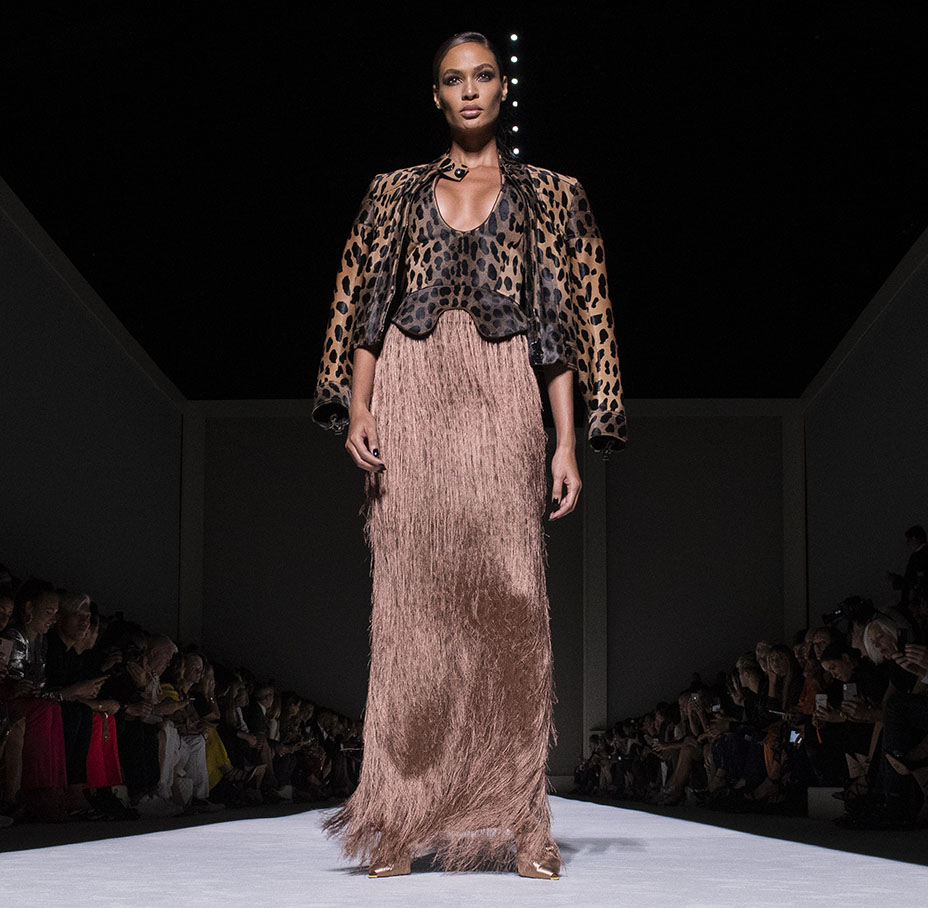 This collection took you back to the good old Gucci days, when a designer like Ford could win over the fashion pack with a finale of white rose petals raining down on the runway, even if there was no Instagram to record it in real time. He charmed us once again.

Move Over Giorgio, Tom Ford is The New King of Beverly Hills