Joel Harlow developed a fascination with monsters, spending his childhood in Grand Forks, Nevada, flipping through horror magazines. For the Oscar-winning special character and makeup designer, creating the demons, witches and Nazis in Hellboy, based on Mike Mignola’s comic book antihero, was a return to basics. “It’s all about the performance of actors in creative suits in real sets,” he says. “These are good, old-fashioned monsters!”

Referencing the Guillermo del Toro films and Mignola’s illustrations, Harlow focused on “a grungier look, embedded with scars, skin imperfections, body hair” as well as aged teeth and, for the first time, hooves. That required three-plus hours of transformation for star David Harbour, who says, “I owe at least 50 percent of Hellboy the character to Joel. We worked together before [2015’s Black Mass], but this was different. It was a passion project for him, and the joy he had every day and his dedication was inspiring. A new level.”

Creating the iconic red demon with a sculpted chest, shaved horns and a tail involved designing a face mask (using a prominent brow and jaw as a starting point) and a bodysuit. Working with a team of 60 specialists in makeup effects that included mold makers, special painters and animatronic pros, Harlow approached the trademark red in a different tone. He says, “While Hellboy is red, I made the conscious decision not to go as red as I would have and built up the color to make the artificial skin look real.” 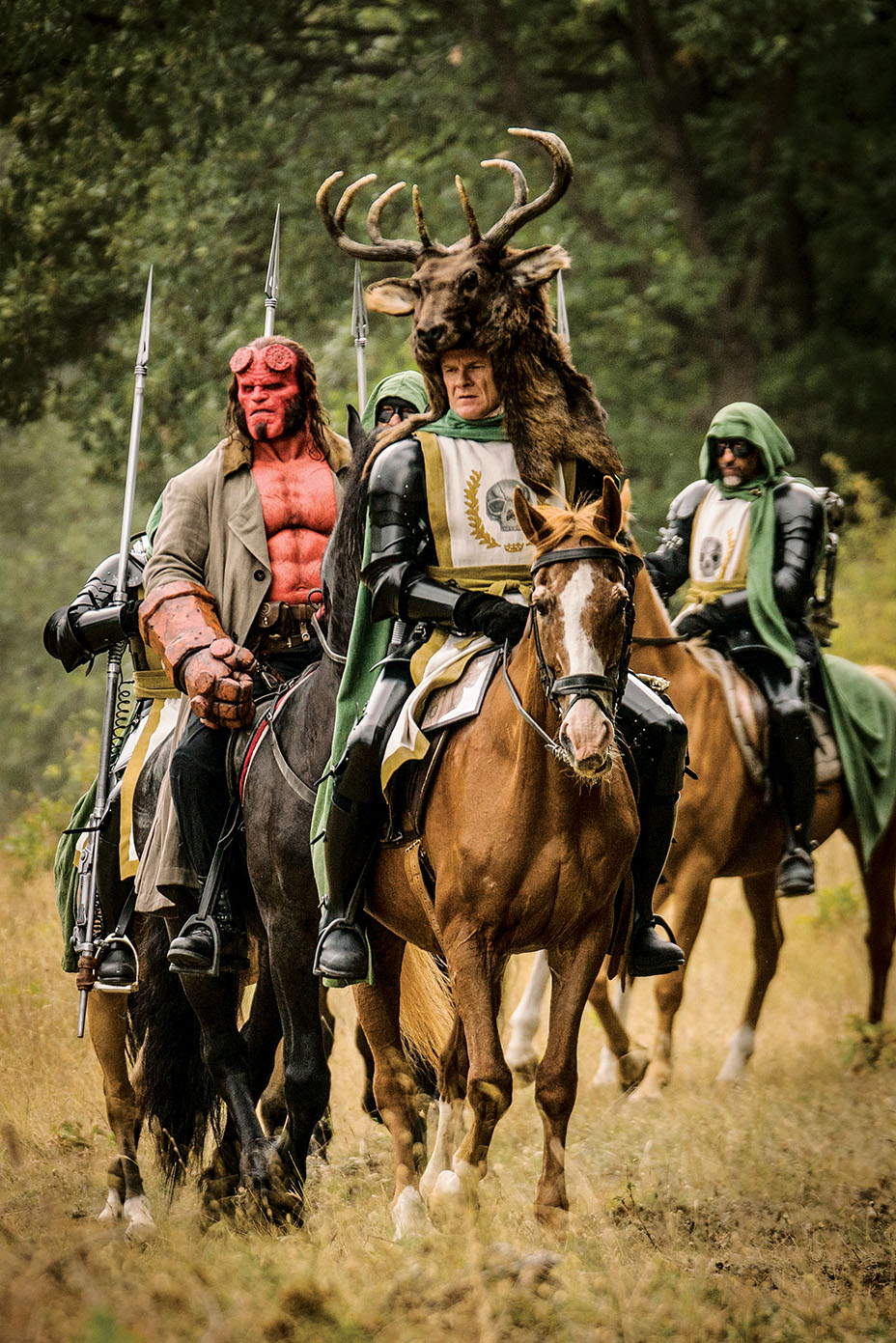 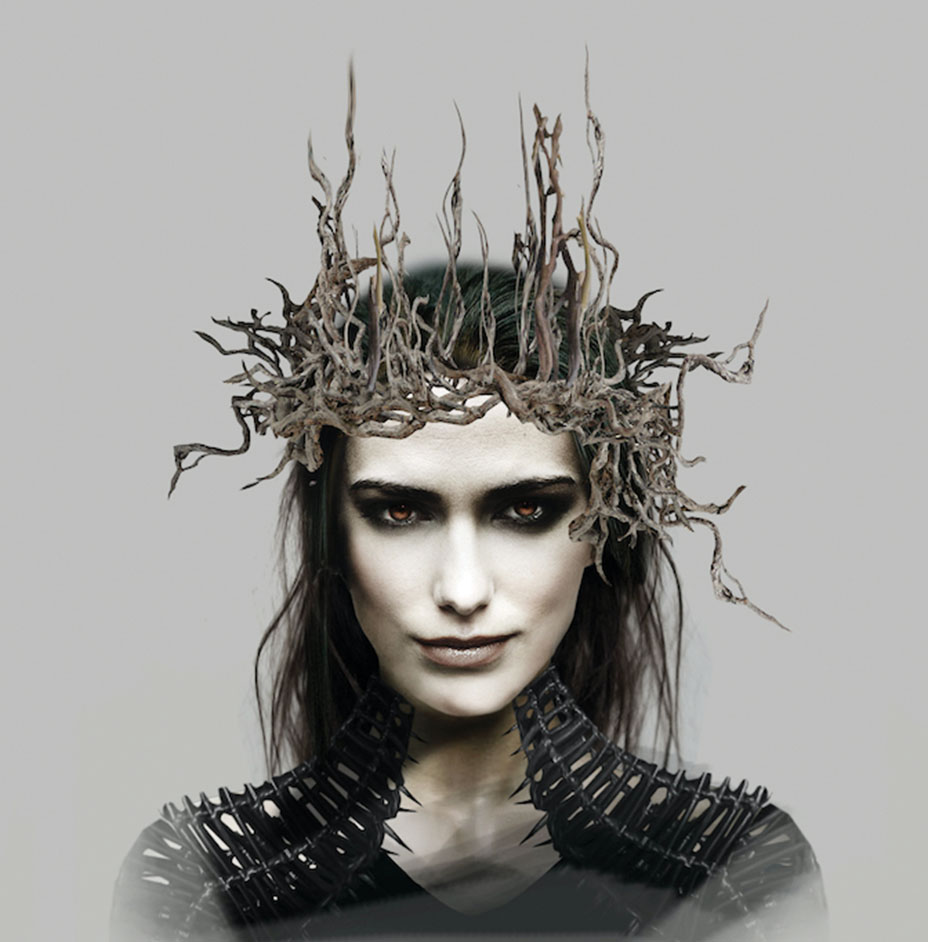 And since the Right Hand of Doom prosthetic “was not functional, it was hard to pick things up,” Harbour says. “Joel really wanted me to feel comfortable and he kept working on it until it was at a level where I myself could be expressive with it. The tail was also a pain in the ass. Having a tail is a pain in the ass. I don’t recommend it!”

Mutton chops, soul patch, aged teeth, various shapes of horns, hooves (a first for the character) and colored contact lens (that had to be changed every 20 minutes) helped complete the look. And as an homage to Mignola’s illustrations, British costume designer Stephanie Collie (Peaky Blinders) added wires in the revere (collar and lapel that turned up) of the beige and gray linen and leather coat so that it would stand up properly. “It is a little detail that no one would probably notice!”

For Blood Queen Nimue, Collie says she flew to L.A. to meet Milla Jovovich to “capture the character’s essence,” and the result is a ghostly, ethereal look. “I wanted a diaphanous flesh color that would be darker and darker as the film progressed,” she details, as the character is resurrected some 1,500 years later and looking rather decayed. “We used a chiffon fabric that was dark at the bottom and lighter at the top and almost looked like it disappeared.” 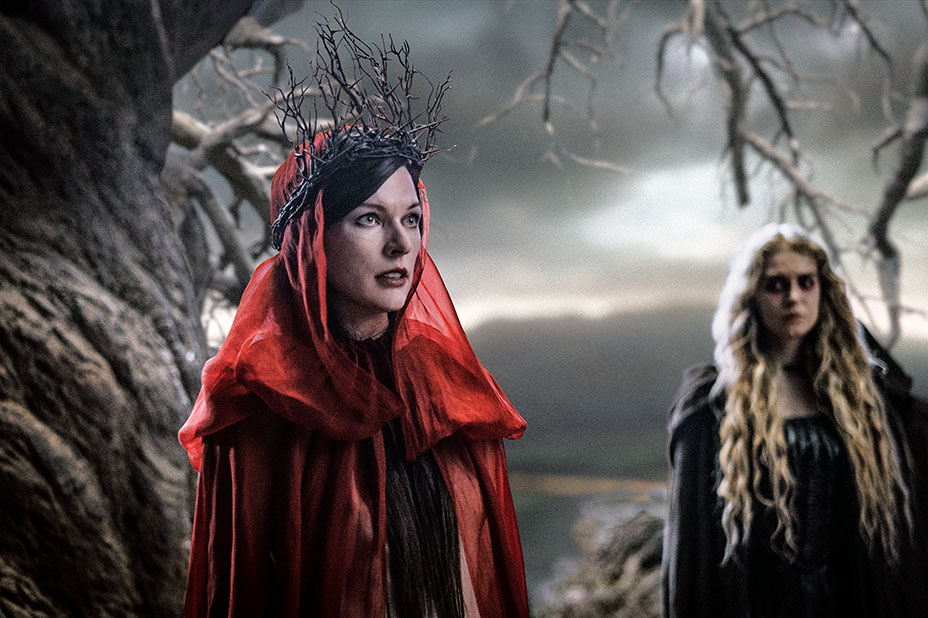 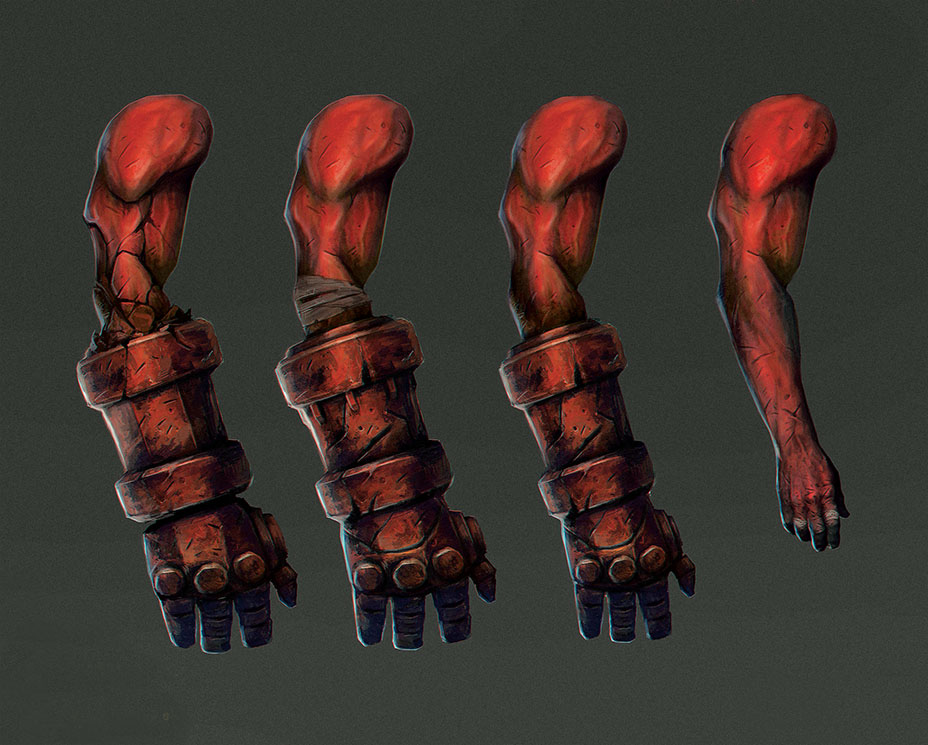 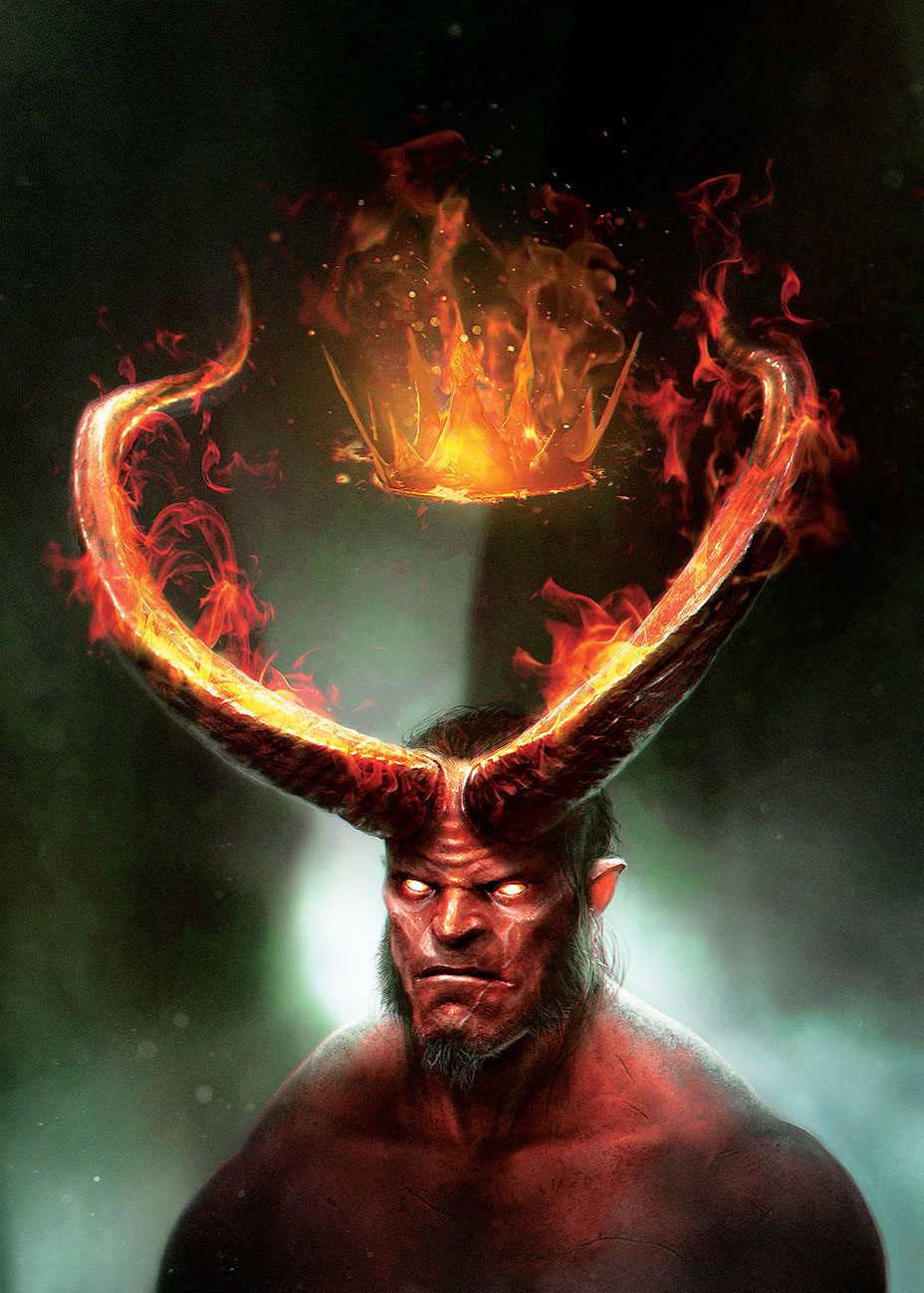 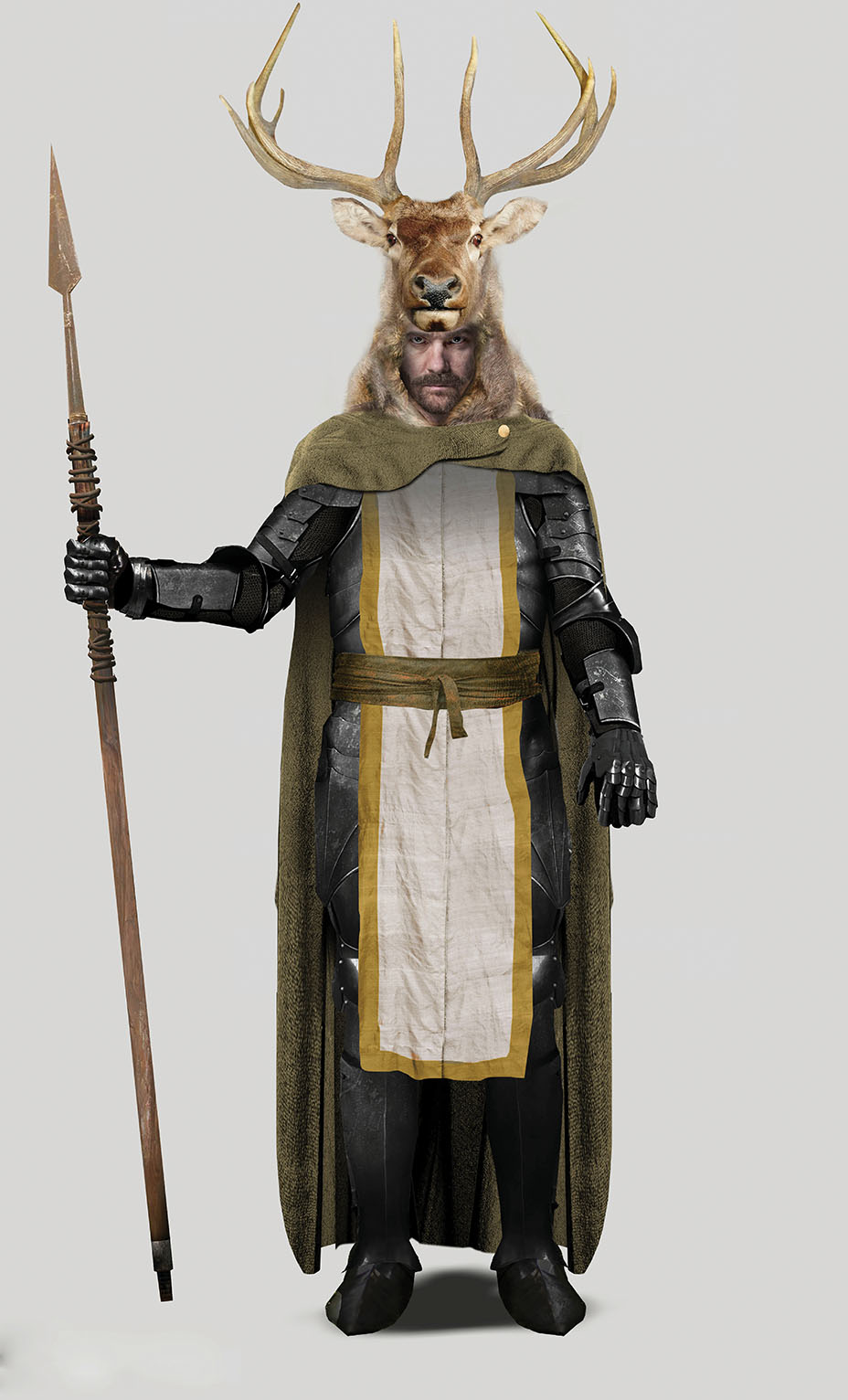