Next year, Boom! Studios will release Bury the Lede, a graphic novel breaking new ground for the publisher, its creators and the kinds of characters readers find inside crime stories in general. The story of an inexperienced journalist accidentally getting the scoop of a lifetime will be the first in a new line of original graphic novels aimed at adults from the publisher known for critically acclaimed YA titles including Lumberjanes and Giant Days.

The book, by Big Mouth writer and I Hate Everyone But You novelist Gaby Dunn and Batgirl and the Birds of Prey artist Claire Roe, revolves around Madison T. Jackson, a 21-year-old journalism student whose internship at the Boston Lede newspaper brings her into the life of Dahlia Kennedy, a prominent socialite and suspect in the ongoing investigation into the murder of the rest of the Kennedy family.

Described as a mix of Killing Eve and The Devil Wears Prada, Bury the Lede will officially launch Boom!’s new slate of adult original graphic novels when it is released next October. The Hollywood Reporter talked to Dunn, Roe and editor Dafna Pleban about the title.

Gaby, you’ve done…everything, basically, when it comes to writing — and performing — and worked in multiple media. Why comics for a story like Bury the Lede?

Gaby Dunn: I’m a huge fan of Boom! Studios in particular and I love the people there so I was jumping to work with them, but also I wanted to test my writing skills in different mediums. A story can work anywhere, you just have to change how you see the final product. For a story like Bury the Lede, that’s darker than what I normally make in the comedy world, I think comics gave me the free reign to get dark and weird with it. For instance, it’s a hard pill to swallow to show a dead child in any medium, but in comics you’re able to stylize it and control how things are shown a bit more. And I wanted to make the jump from comedy to drama/genre and comics was the perfect way to do that.

How are you finding the experience of working in comics for the first time?

Dunn: I love collaborating and I’m finding comics to be a really collaborative process that suits my working style well. I like when I can do my part, writing, and then hand it off to someone else to see their vision — so it was thrilling to watch Claire’s pages come in and see her ideas for what I wrote. I like when everyone gets to do the thing they do best and it morphs into a very excellent finished product. Comics has been the most fun and it’s so satisfying to watch everything come together.

This book is based, in part, on your own experience as a reporter for the Boston Globe; has there been a burning desire to tell a story set in the newspaper world — and, for that matter, Boston — in the back of your head for awhile?

Dunn: Absolutely. Boston was such an amazing town to be a crime reporter in that I felt like it’d be a waste not to create a story around my experiences there.

Is this settling scores in ways that only you’ll understand? You can come clean — we won’t judge.

Dunn: This isn’t settling scores so much as writing self-insert fan fiction about myself and my former co-workers, but look — I’ve worked hard and I think I’ve earned this.

Claire, your work on projects like Batgirl and the Birds of Prey and Welcome Back has shown that you’re someone who can handle multiple tones — and genres — of story with ease — is that something that feels like good practice for a project like this?

Claire Roe: Working on this book is so totally different from anything I’ve worked on before. The other books were definitely good practice for this project, because they were so fast-paced, and had so much going on, that cramming all that into one issue at a time was like starting on hard mode. So now I have room to breath, to tell a story and explore the characters it feels more rewarding than stressful. When I got sent the pitch, it was an instant yes from me. I’ve wanted to work on a project like this for so long, so getting that chance has been fulfilling. Of course, now it’s a case of being able to create a layout that is still interesting to look at, even if there are no explosive action pages. I hope I’ve managed to do that. 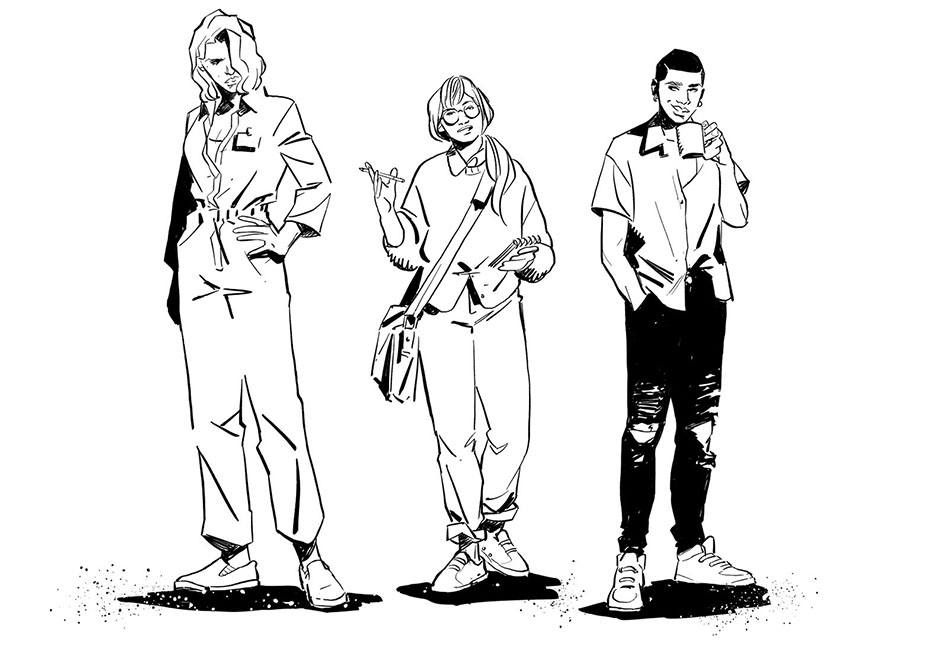 Let’s talk about Madison a little. She’s a character who feels like the ideal entry point for readers into the world of the story, in that she’s starting out herself, but where did she come from? What kind of influences and inspirations was she born from, and how does she fit into the crime genre that includes socialite and potential murderer Dahlia Kennedy?

Dunn: She’s based on myself, but also from this idea that young women, especially marginalized women like queer women or women of color, are fascinated by darkness and crime and stuff that other people might find “dark” or alienating. I think there’s something to be said now for girls like this who actually want to go deeper into the darkness rather than cover their eyes or look away from it. That’s who Madison is. She’s the person studying the crime scene photos looking for exit wounds, she’s the girl up late at night reading Reddit theories on serial killers, etc.

These very traditionally male roles — think Jake Gyllenhaal in Nightcrawler — which are now being taken over by women. Dahlia Kennedy came to be from the idea that mothers don’t kill their children. I’m sort of fascinated by that trope. She’s this pristine person, who you’re primed to hate, but I wanted to show there’s actually pain inside her from how she’s been treated by men and the world around her. She’s a complex female villain, which is always fun to read.

Roe: I love Madison’s place in this genre. She isn’t some highly trained expert piecing the crime scene together to catch the killer, she’s an intern reporter trying to get the scoop for her careers sake yes, but also for her own curiosity. She’s young and doesn’t have her life together, so contrasting her against the pristine veneer of a more worldly Dahlia — a possible child killer demonized by the media — and watching them both peel back the layers is so much fun.

Dafna Pleban: I’ve always been a little jealous at the range male protagonists in these kind of stories are often allowed — they have a lot of space to be total screw-ups, but because the narrative places primacy on their POVs, they often feel the most accessible. Male characters can run the gamut from being relatable to to being aspirational to being just real dicks.

Jessica Jones in Alias was formative for me when I was growing up, and being able to explore similarly flawed but honestly human characters has been my goal since I’ve started working in the industry. Having an opportunity to explore that very basic element of being human through a character like Madison — someone torn between the pride of being good at her job, but often at the cost of the people and relationships in her life. Gaby really hones in on the psychology of a character like Madison, and Claire brings all that internal struggle to life on the page beautifully.

Dafna, how did the book come together? I know it’s the first in a new line of adult graphic novels, but was that the case from the get-go? Did you go looking for the ideal launch project for the line, something that will play with expectation and genre and set the bar for everything that follows, or did the format come from the creative team?

Pleban: As a fan of her work, I had been talking with Gaby for awhile, and when we both realized we responded to the same sort of stories and characters, Bury the Lede felt like a natural place to start. We love complicated female characters who have as much ego as they do heart. I’ve wanted to see more female characters presented as complex, flawed human beings and Madison definitely fits into “love her, wouldn’t want to be her” space nicely. I had such a distinct feel of the characters and the world from Gaby’s pitch — seriously, I even pictured Claire’s art as I was reading it, so I feel extra lucky we were able to bring her on board! 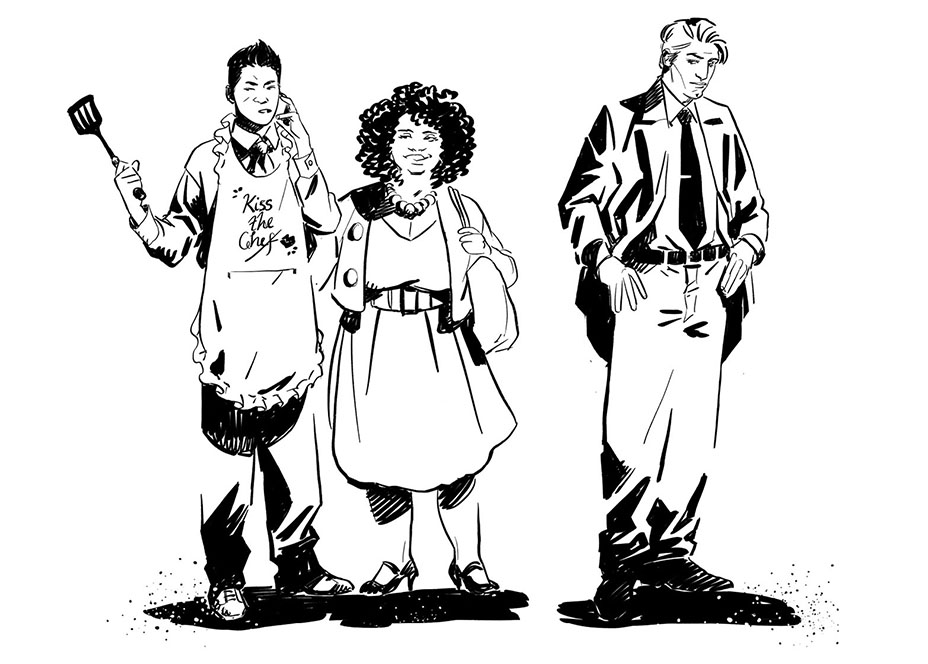 What’s the one thing that sets Bury the Lede apart from other crime comics? How would you describe/pitch the project to people who aren’t necessarily comic readers, but are curious nonetheless?

Dunn: I think people are super into female-led true crime right now, with podcasts like My Favorite Murder and books like Michelle McNamara’s I’ll Be Gone in the Dark leading the pack, so I wanted Bury the Lede to be very “ripped from the headlines” of my own experiences — as a young, queer, cub reporter — working the crime beat at a real newspaper. It wasn’t nearly as interesting as Madison’s story but everything in the book is based on events I really saw happening or was working at the paper during.

I remember pitching it and Dafna saying, “Whoa!” and then me immediately Googling the true story this story element or that story element was based on. I think there’s a hungry audience of women and queers and other marginalized people who are into this dark, disturbing stuff — in all forms of media — and they don’t feel ashamed or guilty about it anymore, and that’s awesome. So the book is majority female, majority queer characters set in a world of “ripped from the headlines” crime. What’s better than that?

Roe: Yes to everything Gaby said. There is such a huge audience of people who are fascinated by these stories, myself included. I listen to the podcast Female Killers, which I love because we quite often dismiss the notion that women are capable of such violence. I think what sets this comic apart is that it’s not about good versus evil, it’s about a cast of very human and complex characters, that’s what really drew me to it. Seeing women in these roles is still rare, especially a character like Madison, who is flawed from the get go. Watching her discover herself, see how far she is willing to go, is really what drives this. Madison is that morbid curiosity we all have about people who kill, people like Dahlia. And you better not make the mistake of thinking you have Dahlia figured out, because you don’t know the half of it.

Pleban: Claire put it really well — the world is filled with very human, complex people, who just happen to be women. It’s not a world that forgets that sexism and racism is still alive and well, but it’s also not the only factor, or even the prime factor, defining their character arcs or lives. Every character in this story wants something, and sometimes that comes at the expense of other relationships in their lives. I’m really excited for readers to discover just how far some of the people in this story will go.

Dunn is repped by Avalon, WME and Bloom Hergott.