When it was announced that The Rosie O’Donnell Show would be back for one night only with a guest list of about 15 million Broadway talents, many of us wondered, would it be a return to the glory days of her multiple Emmy-winning daytime talk show or more like her ill-fated attempt to resuscitate the primetime variety format on NBC in 2008. It turned out to borrow from both those predecessors while evolving into something completely different — a low-tech lovefest that felt like eavesdropping on a group chat among friends looking out for one another in a time of need.

It was spontaneous, messy and blighted by some of the worst audio glitches imaginable. Yet it was often affectingly intimate, and even over an endurance-testing three-and-a-half commercial-free hours, also strangely addictive. The lack of slickness seemed to carry through to the relaxed manner of the guests, and their refreshing unpretentiousness.

Conceived by actor-producer (and occasional tech-support helpmate) Erich Bergen and live-streamed on Broadway.com and the website’s YouTube channel, the show was a benefit for The Actors Fund, the charitable organization founded in 1882 that supports performers and behind-the-scenes theater workers. It raised more than half-a-million dollars, O’Donnell announced at the end of the marathon, sitting in a Hamilton hoodie and offering a champagne toast in a glass emblazoned with the face of Barbra Streisand.

She conducted the entire show from behind a laptop in her New Jersey garage, its floor spattered with the paint spillage of countless craft projects. “I’m a little bit of a Broadway nerd, I admit it,” said O’Donnell, establishing her dual role as host and superfan. 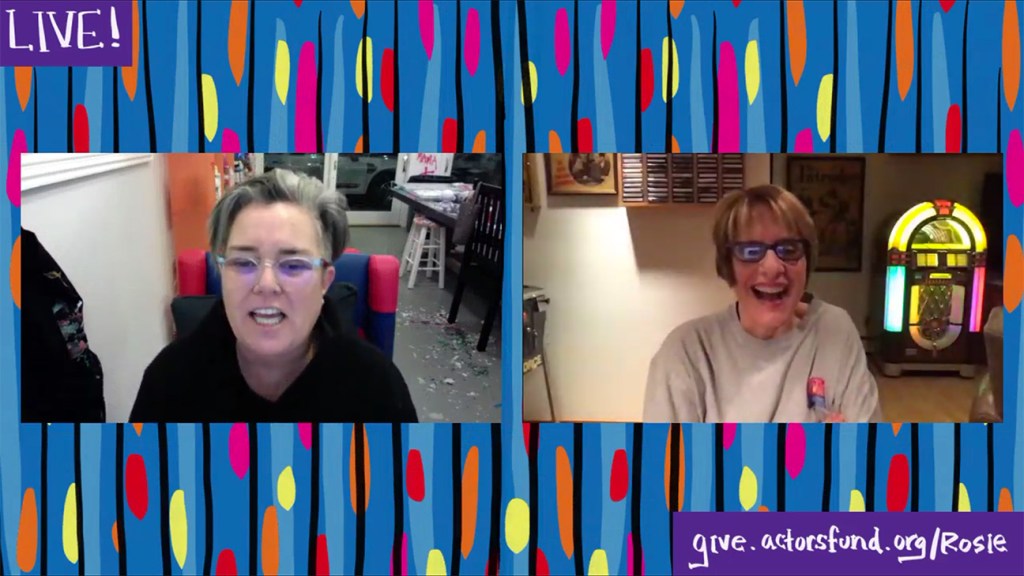 Part of the show’s unique pleasure was seeing favorite Broadway performers chilling in their own homes, almost all of them dressed down, with little visible attention to makeup or hair, and zero concern about unflattering angles. It was a great equalizer, proving that even artists who can hold packed theaters in the palm of their hands with a song are housebound and trying to make the best of a bad situation just like the rest of us — staying close to their families, killing time, learning to cook, wondering how long this unnerving isolation will last. Or how much longer we can put off that shower.

It was kind of comforting to see Idina Menzel sitting by her microwave and confessing, “I guess I’m going a little bonkers,” while lamenting a failed lasagna attempt and sharing the challenges of homeschooling her son when she’s no math genius. Likewise, hearing Matthew Broderick and Sarah Jessica Parker talk about watching Columbo reruns or catching up on The Crown, while SJP begged for no spoilers on the final episode of The Sopranos, which she may now get to at last. Seeing Annette Bening on her Los Angeles balcony wearing a “Make America Kind Again” baseball cap was as much a tonic as watching Neil Patrick Harris do a card trick with his adorable twins. And who doesn’t want to meet Gloria and Emilio Estefan’s cute rescue dogs or hear about Lin-Manuel Miranda’s kids’ reaction to their first exposure to Singin’ in the Rain? 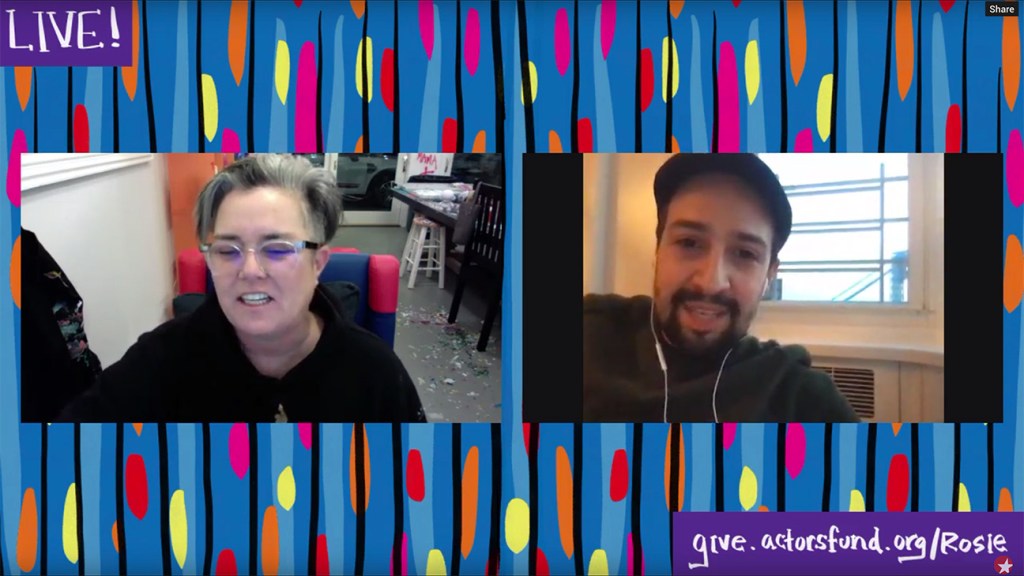 Then there were the musical interludes.

Where else could you catch Patti LuPone, in magnificent voice, singing the urgently upbeat 1930s standard “A Hundred Years From Today,” unaccompanied while sitting by the jukebox in her basement? Or Kelli O’Hara nestled into an armchair honoring Stephen Sondheim’s 90th birthday by wrapping her crystalline soprano around “Take Me to the World,” a hymn to unity from Evening Primrose? Or husband and wife Audra McDonald and Will Swenson duetting on the Charlie Chaplin evergreen, “Smile,” from their Westchester living room? Or Darren Criss pouring his heart into another Sondheim classic about the desire for connection, “Being Alive,” from Company, accompanying himself in a lovely pop arrangement on acoustic guitar from the sofa of his Los Angeles home? And while sound problems plagued Barry Manilow’s selection of hits, ending with “I Made It Through the Rain,” I was tickled to see his Judy Garland Kleenex dispenser.

Many of the song choices were thoughtfully apropos of the current crisis, offering comforting reassurance of the eventual return of resilience and togetherness while people in major cities all over the country self-isolate as the infection rate of the coronavirus pandemic continues to climb. Maybe Tituss Burgess at his home keyboard singing “The Glory of Love” is exactly the kind of uplift we all need right now.

Even in the seemingly random numbers, the entire enterprise was characterized by a spirit of generosity and sharing.

Kristin Chenoweth celebrated a Starbucks romance in “Taylor the Latte Boy.” Matthew Morrison goofed it up on ukulele to a mashup of “The Bare Necessities” and “Zip-a-Dee-Doo-Dah” from his Disney Dreamin’ album. Alan Menken whipped through a medley of his songs from The Little Mermaid, Beauty and the Beast and Little Shop of Horrors, among others, at the piano. Ben Platt, also at the keyboard, did Bob Dylan’s “Make You Feel My Love.” And Adrienne Warren, the sensational star of Tina: The Tina Turner Musical, growled out “Simply the Best” from her bathtub. That was on the third attempt during a particularly troublesome audio patch, by which time her bubbles were history.

Prompted by O’Donnell, more than one guest reminded viewers that The Actors Fund is not just about Broadway artists pulling star salaries but also stagehands, makeup artists, wigmakers and ushers who work in what is very much a gig economy. The organization provides emergency financial assistance, social services, affordable housing, healthcare and insurance counseling and addiction support. 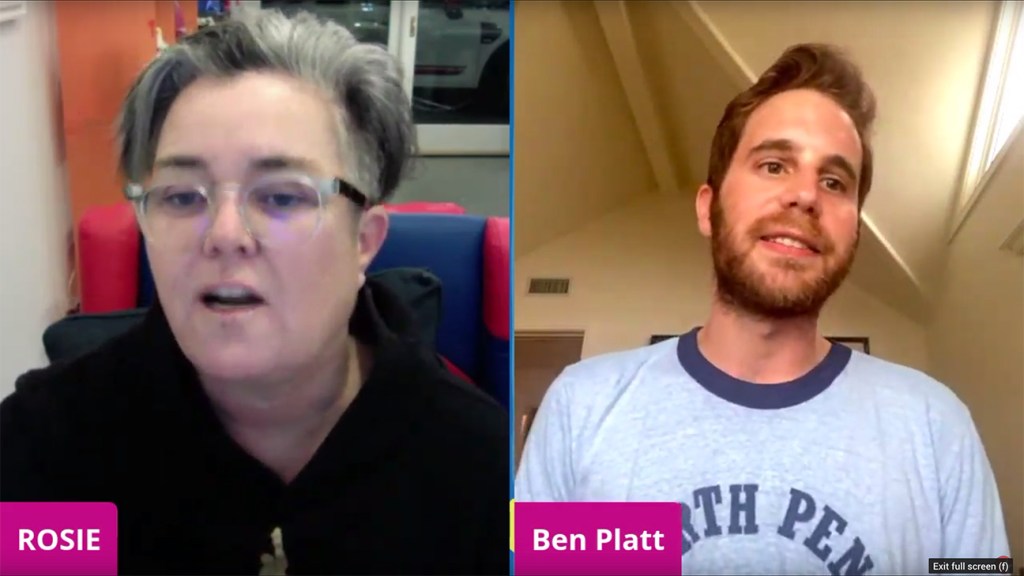 “Everything’s a one-off,” said Tony-winning actor Brian Stokes Mitchell, who serves as chairman of The Actors Fund. “That’s how we get by, and many people are living on the edge right now.”

“We’re all just one, two, maybe three paychecks away from bankruptcy,” added Billy Porter, whose mother is in an Actors Fund nursing home. “In this community, our whole job description is insecurity,” said Judith Light.

Porter, along with Lea Salonga and longtime activist Light recalled how Broadway was on the frontlines of another life-threatening struggle during the early days of the AIDS crisis. All of them urged viewers to stay strong and take the time to reflect on the value of solidarity.

While O’Donnell has never been shy about her opposition to Donald Trump and everything he stands for, the show was remarkably light on politics, with just the occasional dig slipping through. She opened with a little celebratory “Yay!” while admitting she had missed the president’s daily coronavirus press update, and then explained that she and her guests were not there to talk Trump. When Harvey Fierstein, O’Donnell’s 2005 stage husband in Fiddler on the Roof, reminded her of all the election work still to be done, she said, “Let’s all just know, we deserve a leader who tells the truth.” And the delays in making coronavirus testing more widely available prompted a comment that the government should have gotten busy on that back in January when the writing was already on the wall. 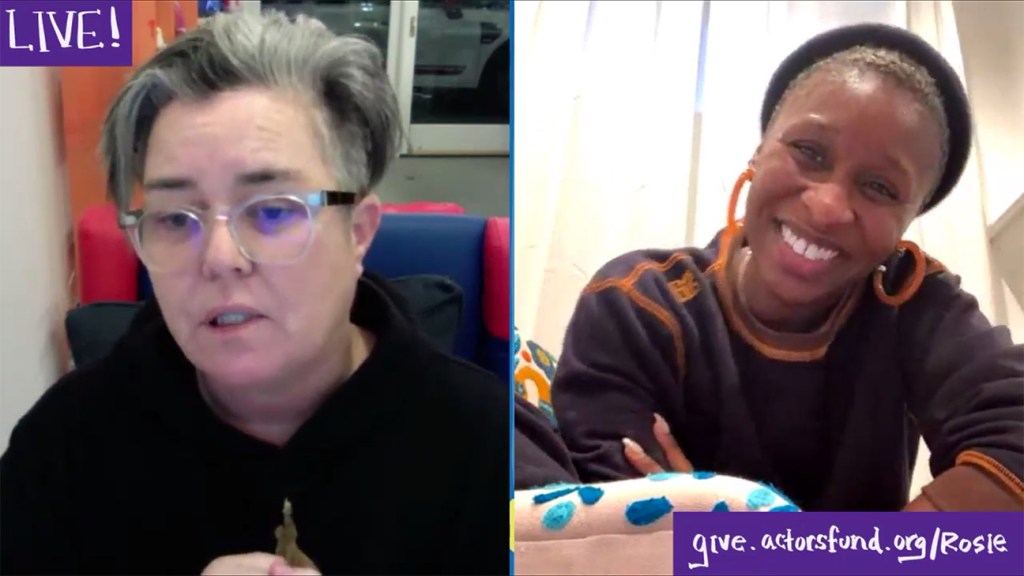 Mostly, however, the hastily revamped Rosie O’Donnell Show was about bringing people together at this time of anxiety and isolation, as the host reconnected with artists whom she has championed since her reign as the Queen of Nice. “Everyone in the community loves you,” she told Chita Rivera in a particularly effusive greeting. “You are our queen mother!”

Many of the performers would have been decompressing after rehearsals or Sunday matinees if the Broadway shutdown hadn’t happened — Criss in American Buffalo, Broderick and Parker in Plaza Suite, Warren in Tina, Lauren Patten and Elizabeth Stanley in Jagged Little Pill. Sunday would have been LuPone’s opening night in the gender-flipped revival of Company. Gavin Creel, who abruptly ended his London run in Waitress to fly home and is in isolation in a cabin in upstate New York, revealed the fear that he might have contracted the virus, given that several others in the cast have fallen ill, with one of them testing positive.

The show bridged the gap separating us from artists whose work we normally experience on the other side of the footlights. Most of us will never again get to see Stephen Sondheim and Andrew Lloyd Webber exchange greetings in song on the birthday the two composers happen to share. From those celebrated veterans to rising-star newbies, the common denominator here was everybody facing the crisis just like us, reaching out a hand of friendship, albeit from a mandatory safe distance.