Curb Your Enthusiasm boss Jeff Schaffer has often said, “Documenting the missteps and social mistakes of the Westside of Los Angeles is an evergreen business,” and he maintains that as he and star Larry David plot out an 11th season of the HBO comedy. But before cameras roll — “We’re hoping to shoot late fall, but we’ll see,” he says — Schaffer reflects on season 10, which has earned the show’s ninth Emmy nomination for best comedy series.

Take me back to the decision to do a 10th season, which, by Curb standards, was made quickly.

Usually the last episode of the season is the last episode of Curb there will ever be. This was the first time it went differently. We were sitting in the edit room, finishing up the fatwa episode of season nine, and we’re always talking about ideas, but I didn’t think anything was going to happen right away. Then [Larry] turned to me, this is on a Friday, we’re basically done, and he goes, “All right, well, I’ll see you on Monday.” And I’m like, “Wait, you mean for another season?” He’s like, “Yeah.”

What made it different, you think?

There are two things that Larry really enjoys: doing the show and playing golf. And you can only play so much golf. (Laughs.)

One of the more indelible images of season 10 is Larry in the MAGA hat. How did that come to be, and how did that image not leak?

We were so worried because we were shooting on San Vicente in Brentwood, and then on Pico and in this sushi restaurant filled with extras. Larry stood up and basically said to the extras: “We want to keep this a secret, so don’t be a spoiler. Nobody likes a spoiler.” And they kept the secret, which was fantastic. I mean, it was such a perfect Larry story, and I just kept going, “Oh please, I hope no photos come out.” It’s the same reason Larry doesn’t want there to even be a teaser for the show on the backend of the previous episode. It’s like, sometimes you go to bed and you’re fine, and then you wake up the next day and you have a pimple, and you’re like, “Where did that come from?” That’s what Larry wants the show to be. He wants Curb to be a pimple on your face that just appeared and you don’t know anything about it or where it came from, but it’s there.

It is so perfectly Larry …

Yeah, but people were like, “Oh, you guys got so much more political this year,” and that’s not really it. We’re creatures of our environment. And TV Larry David lives in the real world, and these issues were so big that it seemed weird to not do them — we just had to do them in a Curb way. So you do the #MeToo movement, but you do it with side-sitting and being afraid to give your assistant the Heimlich because you don’t know where to touch. And you’re going to deal with Trump, but you do it through the eyes of having it be a boon to a misanthrope. 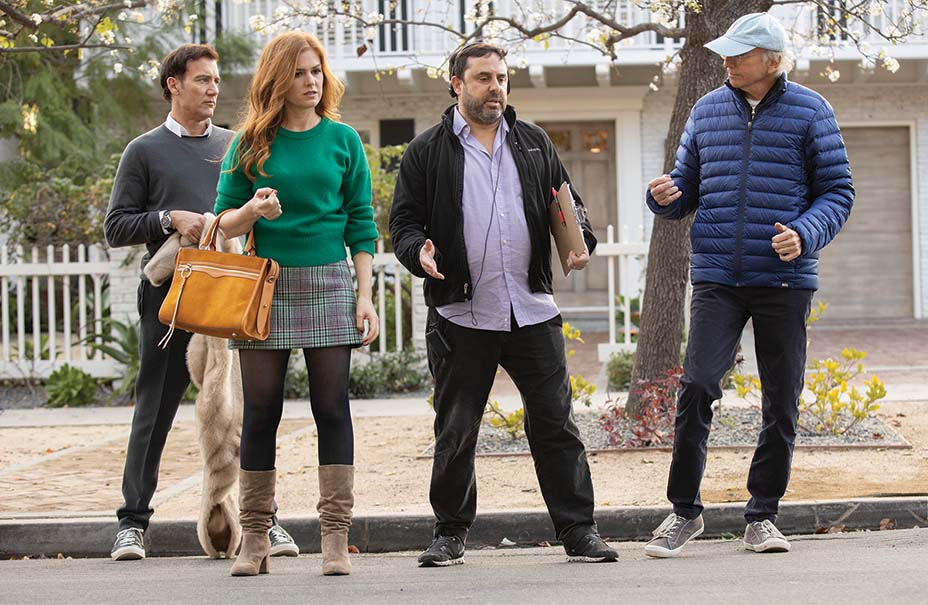 It prompted a tweet from the president. Is that considered a victory?

It’s so funny — when we were shooting it, someone on set was like, “When this comes out, he’s definitely going to tweet about this.” And I said, “No, that’s crazy.” And then he did, and he pinned it at the top of his feed, and it just stayed up there. This guy is so stupid, he doesn’t realize we’re making fun of him. Larry and I talked about it, like, is there a response we do? But we decided to just let that orange-haired baby sit in his own messy diaper.

You tackled the #MeToo movement, with Jeff Garlin being mistaken for Harvey Weinstein. Where did that idea come from, and how awkward is that ask to Jeff Garlin?

When the Harvey news broke, I walked into the office and said to Larry, “How soon before Hallmark asks Jeff Garlin to play Harvey in some Hallmark movie?” And we laughed about it, and then I said, “Wait, why give this to Hallmark? We should do it.” So we called Jeff, and Jeff is such a sport. We were way more nervous to call Ted Danson to say that he was getting divorced from Mary [Steenburgen on the show]. We were way more nervous to call Lin-Manuel Miranda to see if he’d do [an arc] because we had no plan B. 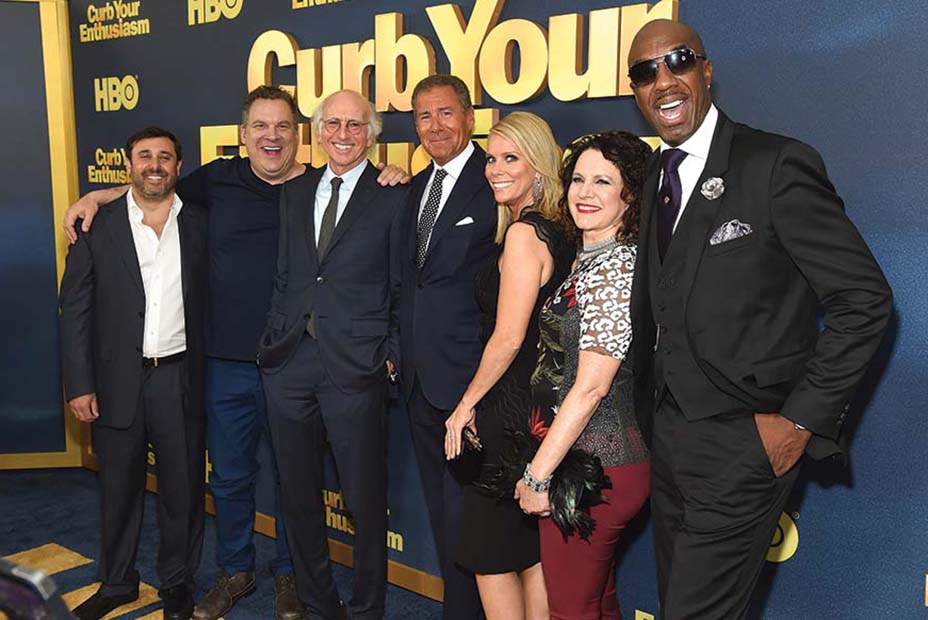 You had a lot of great cameos this season, particularly with the spite stores. Any good stories to share, whether it made it to air or not?

We’re very lucky in that there are a lot of great people who would love to be on Curb. We hear it all the time; someone’s manager, agent or even a friend will say, “Oh, they’d just come and hold a pencil on Curb.” And I’m like, “No one wants to see this big star hold a pencil.” It’s all story-dependent. There are people who we seek out as we’re writing, like Isla Fisher or Fred Armisen, and then there are people we’re completely surprised by, like Clive Owen. With Sean Penn, we kept saying, “We want someone like Sean Penn [to open a spite store that sells birds],” and we finally said, “Why don’t we just ask Sean Penn?” Luckily, he’s a huge fan of Larry’s, and he was amazing. There was a really funny vignette that we couldn’t fit for time where a customer came into Sean’s store and was asking all these questions about what kind of bird she should get and this and that, and then she says, “Now, will it matter if I have a cat?” Sean just stares at her and says, “Get the fuck out.” It’s so good. I really wish Larry would allow us to put some of the deleted scenes in [later].

We get into this argument all the time. He says, “Eh, if it wasn’t in the show, people don’t want to see it.” I say that’s exactly why they do. 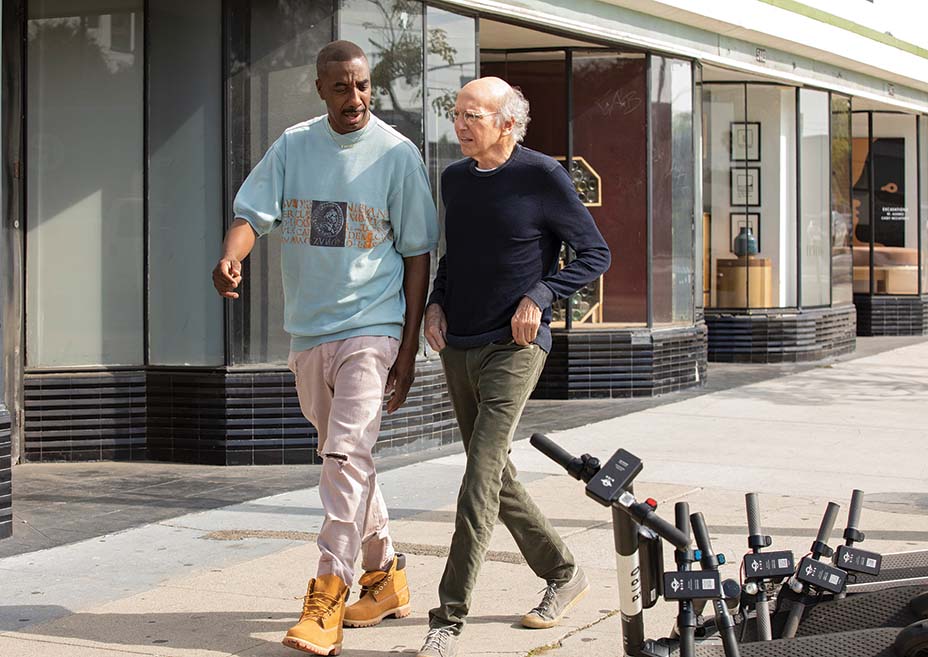 This spring, you kept telling reporters you were flirting with a season 11. What got you to commit?

It’s always tricky in those interviews because usually we are working on a new season, but I’d never want to say that because Larry doesn’t want to ever feel like he has to do it. So we always write about seven or eight shows before we really tell anybody that we’re doing the season, and then people are like, “Hey, when do you start?” And we’re like, “We finished.” 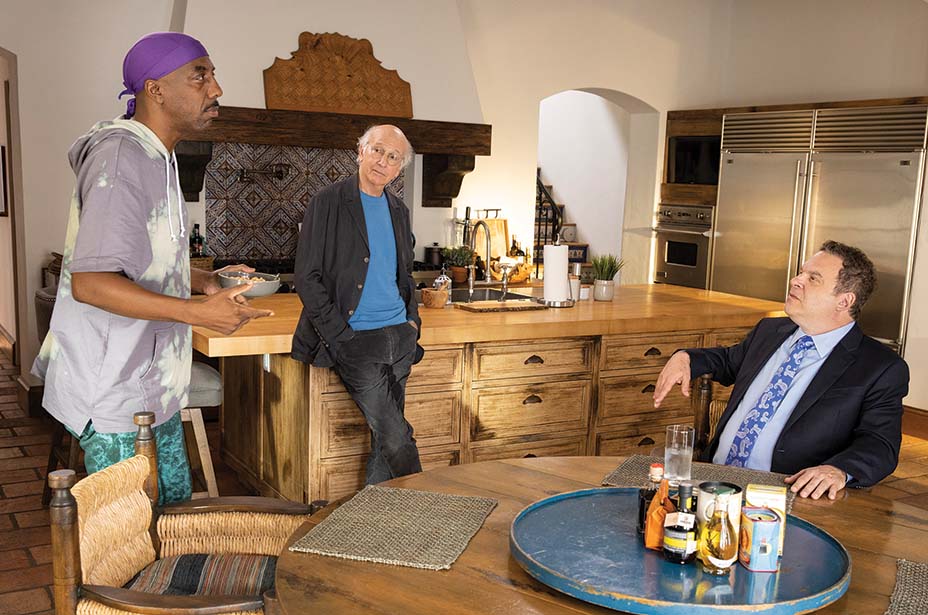 You are now writing for a very different world. How will COVID-19 impact the stories you tell?

It’s been a tricky balance because we’re in the real world and the pandemic happened, but we also can’t do jokes right now that are so timely that in a year they look out of touch. By the same token, if you know you’re not coming out for a year, you also don’t want to be the last one to the dinner. So, you have to do it with Curb twists.

You shoot a lot on location. How are you going to do that?

I know, like, who’s going to let us into their house? Just think about what a location scout does: They knock on your door and say, “Hi, person I don’t know, here are 10 strangers, we’re going to come into your house and touch everything. But here’s the good news: If we really like your place, we’re going to come back with 90 people and be here for two days.” (Laughs.) The other thing I think about is with all the social distancing, we’ll have to basically buy another location next door for the crew — our location budgets are going to go through the roof.

Is a 20-year-old series going to win one of the night’s biggest races after going nearly a decade since its last TV Academy nod — one that, might we add, was for editing? The answer is almost definitely not. Curb Your Enthusiasm, like a pair of curmudgeonly jeans its creators and audience refuse to give up on, is just along for the ride. It remains a crowd-pleaser, but it has neither the heat nor the relevance to make a compelling case for why it should win best comedy. Sure, it could always sneak a win based on the merits of its pedigree, or its years of contribution to the genre, but such a surprise seems more likely to come for a final season. And this show isn’t going anywhere just yet. — MICHAEL O’CONNELL