This year’s theme for the Human Rights Campaign gala, which was held Saturday at the New York Marriott Marquis, was “Rise,” honoring Cynthia Nixon with the Visibility Award and Audra McDonald with the National Equality Award. Diageo received the Corporate Equality Award.

The evening boasted a palpable and rigorous political energy, as several New York politicians attended and spoke at the event. Governor Andrew Cuomo opened up the night’s lineup.

“We cannot let them impose their will and their vision on this country,” said Cuomo, highlighting his office’s plan to end the AIDS/HIV epidemic in New York. “Whatever is necessary to do we must do, because you cannot compromise with hate and prejudice without degrading the nation.”

Sen. Kirsten Gillibrand spoke next on the importance of defending trans rights, and noted that her work repealing “Don’t Ask, Don’t Tell” in 2009 is some of the proudest of her career.

“That experience was a turning point, too, because it taught me a fundamental lesson that I will never forget. Washington only acts when courageous people stand up and demand it,” she said. “Change only happens when all of us unite to make our voices and our stories heard.”

Later in the evening, Sen. Chuck Schumer delivered a rousing address after tearing his pre-written speech in half before the crowd. He recounted stumbling into politics as a student when the Democrats on campus knocked on his door and he joined the effort against President Lyndon Johnson and the Vietnam War. “We are against someone far worse than Lyndon Johnson and the dangers to America are even greater, but I have never seen such activism in the streets,” he said. “I have never seen that except in the Vietnam War days. So we can do it with you.”

Javier Muñoz, who just ended his run as Alexander Hamilton in the musical Hamilton, presented McDonald with her award.

The actress and singer used a Wizard of Oz analogy throughout her speech, likening the HRC’s goals to making it “over the rainbow.”

“It feels like we are Kansas in black-and-white, whirling within a tornado unsure of whether we will survive,” she said. “And sure we have a wicked witch, but this witch is orange instead of green. But where is our Glinda the Good Witch in her pink bubble? Where are our red shoes? Where is the hope?” 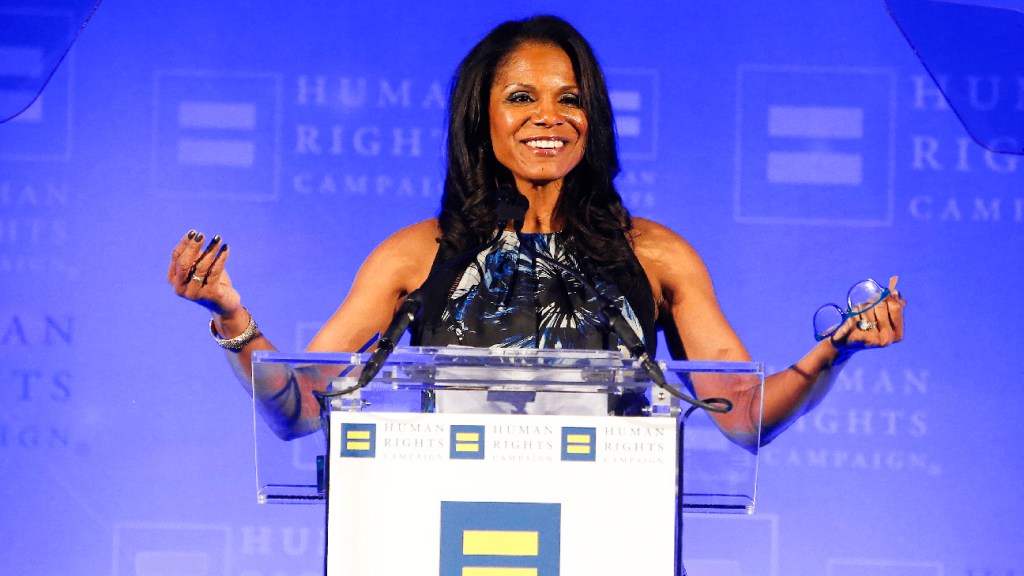 McDonald also applauded the activism of her 16-year-old daughter Zoe and others like her. “I don’t have to worry about giving her hope — it is she and her generation that is not only giving me hope, they literally are hope,” she said, adding, “I do believe that her generation is the generation that’s going to save us from ourselves.”

Rabbi Sharon Kleinbaum presented Nixon with the Visibility Award. The actress opened her speech by acknowledging the safety that some privileged members of the LGBTQ community have begun to find comfort in and urged the audience to check their advantages and advocate for everyone.

“While some part of our community is enjoying our newfound and hard-won position of relative privilege, the other parts of our community are being targeted with a venom that takes my breath away,” Nixon said, who went on to speak about the need to stand beside transgender individuals and immigrants.