There’s no prosthetic nose in writer-director Erica Schmidt’s streamlined new take on Edmond Rostand’s 1897 verse drama Cyrano de Bergerac, and most of the quips about the title character’s plus-size proboscis have been excised. But the defensive pride and haunted solitude of the outsider who believes his appearance means that no woman could ever love him cuts deep in a transfixing performance from Peter Dinklage, bristling with humor, pathos and fierce magnetism. He’s ably backed by Jasmine Cephas Jones as Roxanne and Blake Jenner as the dim pretty boy who lacks the words to woo her in this evocative alt-musical, with an original score by members of The National.

Cyrano was commissioned and developed by Goodspeed Musicals in East Haddam, Connecticut, and is not the first adaptation to retell in song Rostand’s classic about a courageous French Army officer with the soul of a poet. Of the multiple operatic versions, Italian composer Franco Alfano’s from 1936 is the best known; it was last performed at the Met in 2005, with Placido Domingo in the title role. Christopher Plummer won a Tony Award for best actor in a 1973 Broadway musical directed and choreographed by Michael Kidd, but the show nonetheless was short-lived.

Schmidt, who is married to Dinklage, has tailored her radically trimmed adaptation into a snug fit for the actor, with his combination of hard-charging physicality, sardonic wit and piercing intelligence. In the same way, the score — by The National songwriter-musicians Aaron and Bryce Dessner, with lyrics by lead vocalist Matt Berninger and longtime collaborator Carin Besser — sits well with Dinklage’s growly baritone, which often recalls Leonard Cohen or Tom Waits. Even when he talk-sings, Dinklage invests powerful feeling into melancholy songs full of longing, making this a distinctive vehicle for his first time back on a New York stage since wrapping Game of Thrones. And Dinklage’s gravel voice is nicely offset by the pure, sweet sounds of Cephas Jones and Jenner. 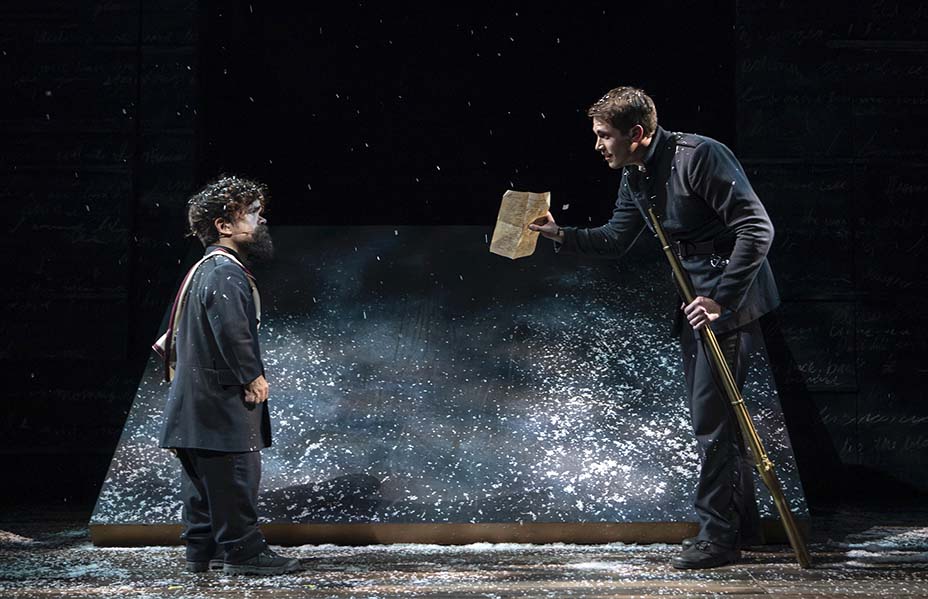 The spirited verbal comedy for which the Rostand play traditionally is known mostly takes a back seat here to romance and tragedy, and audiences seeking a faithful production of the classic work — last seen on Broadway in a tiresomely hyperventilating 2012 revival — should look elsewhere. Still, even if Schmidt’s fussy intro ambles a bit before getting to the nub of the story, it does provide Dinklage’s Cyrano with a hilarious entrance as he shuts down a theatrical performance by a celebrated ham (Scott Stangland). Drawing his sword and challenging anyone to step forward and defend the actor, he empties his wallet to cover refunds for the entire audience.

Roxanne is in attendance with her smarmy suitor, the Duke de Guiche (Ritchie Coster), and anxious chaperone Marie (Grace McLean), who frets that rejection of the nobleman will ruin them. Cyrano has no such fears, however, and when the Duke mocks his appearance, he throws that mockery right back in the arrogant man’s face. “I am living proof that God has a sick sense of humor,” says Cyrano, in an acknowledgment both bitter and defiant of his status in a world that values physical beauty over intellect.

Cyrano has loved Roxanne since their childhood summers; when she sends a request to meet with him privately, he thinks it might finally be his opportunity to declare his feelings. After scheduling the appointment at the pastry shop of his friend Ragueneau (Nehal Joshi), he starts losing his nerve, deciding instead to express his love for her in a letter. But Roxanne arrives early, crushing his hopes when she reveals her love for Christian (Jenner), a handsome new cadet in Cyrano’s company with whom she has never exchanged a word. Appealing to him as a friend and a man renowned for his bravery, she makes Cyrano promise to protect the young man’s life, should they be sent into battle.

Cyrano’s desolation is tempered by a begrudging affection for Christian, who is just tongue-tied enough to be endearing without being an entirely hopeless dolt in Jenner’s appealing performance. Aware that he’s too inarticulate to impress a woman as discerning as Roxanne, he conscripts Cyrano, first to pen his love letters and then to feed him words in the play’s famous balcony scene. For Cyrano, this pact becomes his way of passionately declaring himself, even if the sentiments are attributed to someone else. “I will make you eloquent,” he tells Christian. “And you will make me handsome.” 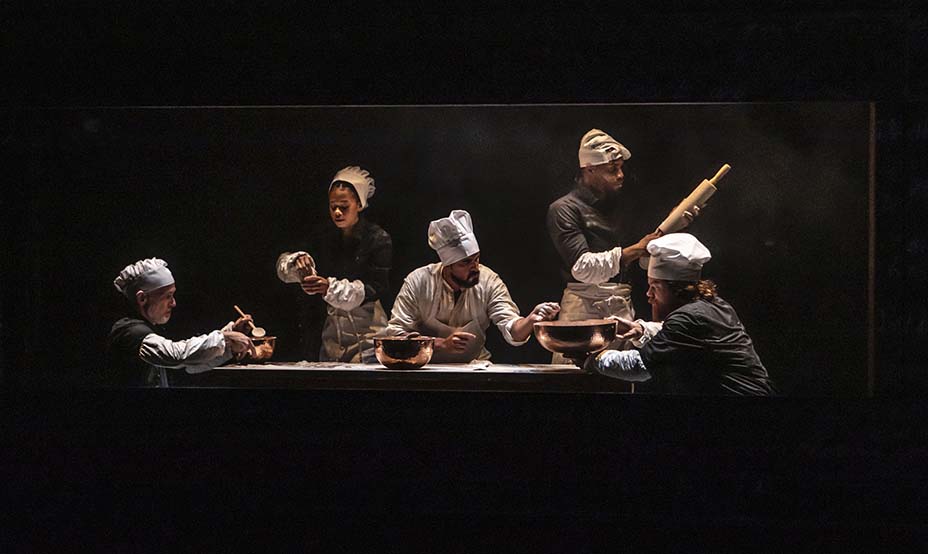 The twisted romantic triangle proceeds to grow more complicated as Roxanne manipulates the Duke first into keeping Cyrano’s regiment far from the front, but then incurs the nobleman’s wrath by marrying Christian in a hasty ceremony. When her young husband is sent to fight, partly as retaliation for the angered Duke’s humiliation, Cyrano proves his selfless valor by slipping past enemy lines each day to send Christian’s love missives to Roxanne. But tragedy inevitably strikes. The full truth is revealed only after 15 years, too late to correct misconceptions, closing the show on a note of wrenching sorrow.

Played by a six-piece band under the music direction of pianist Ted Arthur, the songs are more often mood pieces than plot drivers and could have used a little more variation. But the depth of feeling in their melodies, particularly in the lush swelling of string passages (Mary-Mitchell Campbell did the gorgeous arrangements), compensates for the sometimes pedestrian lyrics. And Schmidt stages the numbers with a lovely simplicity, embellished with expressive gestural choreography by Jeff and Rick Kuperman.

This is especially effective in an early scene at Ragueneau’s, in which a window opens in the set by Christine Jones and Amy Rubin — aptly dominated by a wall etched all over with cursive script — showing the graceful movements of the bakers as Cyrano bares his poetic soul. The balcony scene also is captivating, with thick wisteria vines cascading over the wall to deepen the shadows that conceal Cyrano and Christian. One of the most stirring musical interludes is “Southern Blood,” a hymn to home from the soldiers at the front: “We are Southern sons and daughters / Southern metal in our hands,” they sing. The inclusion of women and guns feeds into the timelessness of Schmidt’s setting, as does the period-blurring of Tom Broecker’s costumes. 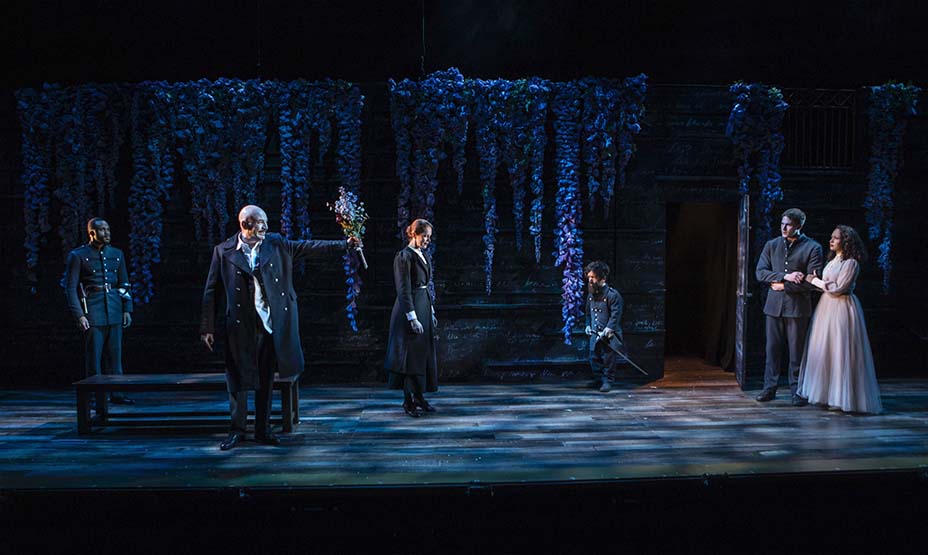 Among the ensemble cast, British actor Coster is a little too one-note starchy to make the Duke’s transition from pompous creep to honorable man entirely believable, but Josh A. Dawson brings sensitivity to Cyrano’s loyal friend Le Bret, and McLean (like Stangland, a talented veteran of the stunning Natasha, Pierre & the Great Comet of 1812) makes a warm companion for Roxanne.

Cephas Jones — given more scope here than in her dual track as Peggy Schuyler and Maria Reynolds in the original Hamilton cast — is enchanting as the object of two men’s affections; she also has the brisk self-possession to back up the character’s insistence on a partner worthy of her intelligence. “I Need More,” she sings to Christian when words fail him, her demand not so much indicating her vanity as the substance she requires in a man. That characterization adds weight to the modern feeling of Schmidt’s interpretation, without belaboring any feminist gloss. Cephas Jones’ fervent vocals are full of tenderness and yearning on love songs like “Someone to Say,” performed in a glittery silver shower, and “Overcome,” a duet sung with Cyrano passing himself off as Christian, as well as her soulful lament, “Defenseless,” sung alongside nuns working in the convent garden where she mourns.

But the heart of the production is Dinklage, who brings a light touch and extreme naturalness to Cyrano’s droll posturing, his self-deprecation, his moments of sobering introspection and sorrow, and his constricting pride and doubt — “the two serpents,” as he calls them. “Why can’t you see your pride will leave you nothing?” Le Bret sings to him, in words Cyrano heeds too late. Schmidt perhaps rushes the emotional conclusion, ending the show a tad abruptly. But as played by Dinklage and Cephas Jones, the scene is as intensely moving as any version of Rostand’s play I’ve seen.