Just about any actor who has done a three-month run of a Broadway play will tell you that the final performance invariably is an emotional experience — often for the audience as much as the cast — as company members who have formed close bonds prepare to go their separate ways, shedding characters that have become like second skins.

Houses for closing shows frequently are packed with family, friends and repeat customers who just want to savor the experience one last time. Directors and playwrights often return to show their support and gratitude for hard work and commitment stretching back to the rehearsal room, weeks ahead of the first public performance. Gifts are exchanged and curtain speeches bring their share of tears.

For the cast of Roundabout Theatre Company’s Broadway production of Charles Fuller’s A Soldier’s Play — headed by David Alan Grier, Blair Underwood, Jerry O’Connell and former NFL All-Pro Nnamdi Asomugha — that bittersweet farewell was still five shows away when they learned they had played their final public performance the night before without knowing it.

The tight-knit company, directed by Kenny Leon, played their regular Wednesday evening show on March 11 to a capacity audience in an acclaimed production that had continued to sell out even as coronavirus concerns were mounting. The following day, like everyone else currently appearing in a Broadway show, they learned they wouldn’t be going on that night, or any night for the next month in a shutdown currently scheduled through April 12 but widely predicted to last at least twice as long.

For veteran actor Grier, the show marked his return to Broadway for the first time since his Tony-nominated turn in Porgy and Bess in 2012. He had a long history with Fuller’s 1982 Pulitzer Prize-winning race drama set on a Louisiana Army base during World War II. Early in his career, Grier had stepped in as a replacement in the role of Private C.J. Memphis during the original off-Broadway run with the celebrated Negro Ensemble Company in a cast that included Denzel Washington, Adolph Caesar and Samuel L. Jackson. Grier’s second film role was as Corporal Cobb in the 1984 screen adaptation, retitled A Soldier’s Story.

In the Roundabout production, which marked the first time the play had been presented on Broadway, Grier was effectively cast against type as the bitterly self-loathing, bullying Technical Sgt. Vernon C. Walters, whose murder sets the powerful thriller and its puzzle-like series of flashbacks in motion.

Now back home in Los Angeles with his daughter, the actor spoke with The Hollywood Reporter about reconnecting with the play, and the unusual separation process when its closing week was cut short. Thanks to a special private performance filmed for the video archive of the New York Public Library for the Performing Arts at Lincoln Center, the company got to say their goodbyes. 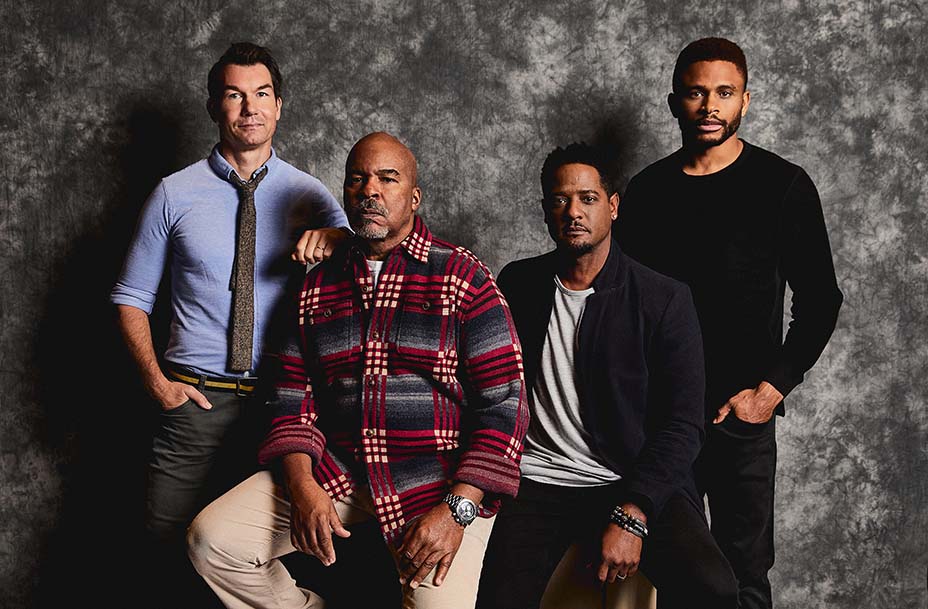 How did you learn that Wednesday had been your final night?

Well, we were scheduled to close on the 15th, and actually, Jerry O’Connell on Thursday started saying early on that that would be our last show and I thought he was crazy. But he was absolutely right. Then an email went out from Roundabout Theatre Company asking us to still show up on Friday in order to tape the show for Lincoln Center, of course to an empty theater, and we all agreed. Walking to the theater on Friday through a much thinner crowd than ever around Broadway, with hardly anyone there, I realized that for one night we were the only show on Broadway. It was without an audience, but still.

Did you have friends and family of the production there to watch?

I mean, there was a crew and I think there were maybe 15-20 people, so that was even weirder than it being empty. But I’m glad we did it, because it was a way for us to come together and be able to say goodbye, and it’s been such an incredible experience. We were just lucky, man. There was a show that was opening on Thursday night; they had been working for months and months. Canceled. There were shows that were coming in — Birthday Candles with Debra Messing, Caroline, or Change with Sharon Clarke, who I heard was amazing — all of them shelved. I feel really bad for all those actors and shows that didn’t open. We basically got to finish our run just shy of five performances, and I feel really happy about that. It was just plain luck that it happened that way for us.

This was your sixth Broadway show, so you’ve obviously experienced the mixed emotions of final performances in a run before, but this one must have felt very different?

Had we not gone back to the theater on Friday, it would have been like anybody coming home from work at the end of a day and being told, “Oh, by the way, that’s your last day of work and you’ll never see your co-workers again.” There’s no finality, there’s no closure, there’s none of that. But we had a nice little toast and got to hug and kiss. [Laughs] Let me rephrase that. We practiced conscientious separation. No, but being serious, we had a chance to say goodbye, to our crew and everybody and it was great. I feel really fortunate that we were able to do that.

Some people didn’t even get that. Emotionally, physically, psychically, when you’ve worked for months and months, you’ve relocated, you’ve left your family, you’re working on this goal to get the show up, I can’t imagine the turmoil. Let alone that there’s a real threat to audience members, crew, actors. No one wants to get sick. You don’t know whose health is compromised and who’s at a greater risk. That’s really the crux of this whole thing. I’m healthy, you may be healthy but maybe when you go home there’s someone in your house or apartment that’s not so healthy. That’s what it is. I totally support this shutdown, but within 24 hours it was night and day. I mean, you’ve seen pictures of Times Square? At that point I just wanted to shut everything down and get home to my daughter, who I’m sitting with now, who refuses to leave the room because she’s making beats on her computer. And eavesdropping in on us. She’s making faces right now, she’s 12. 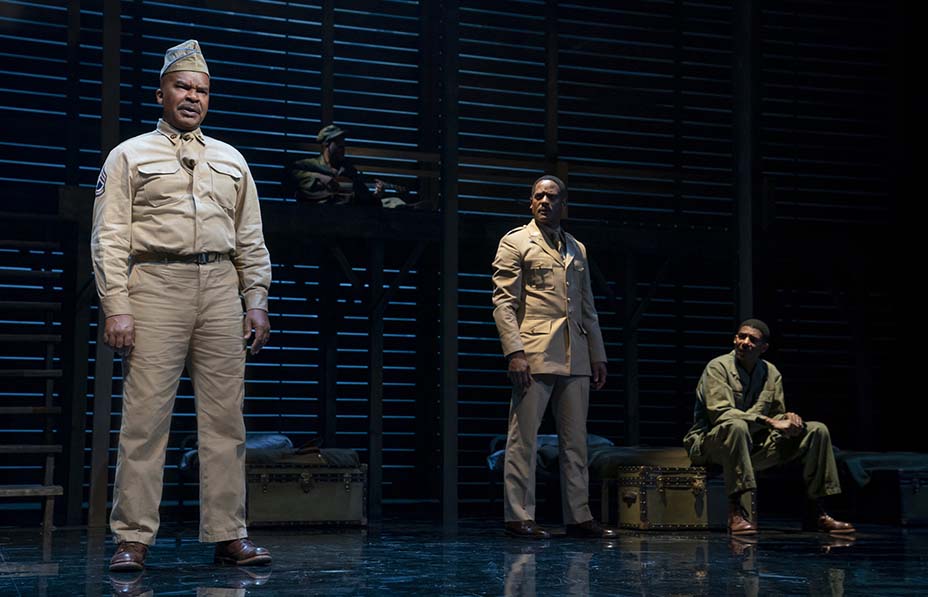 Did the company have plans in place for what was originally scheduled as the final performance March 15?

There was always going to be a champagne toast, and we had that, it was just more informal. There was no audience, there was no ovation, it was just a quiet, somber end of the play. Kenny Leon came back and it was very much a family affair. I feel like we got so much love from our fans and supporters and people who’ve been communicating with us. But then there were others who were saying, “Oh, I’m coming tomorrow.” No you’re not, not anymore.

This was a 12-person, all-male ensemble cast in an intensely charged drama heightened by its claustrophobic setting in an Army barracks — had you guys become a tight family unit?

Yeah, man, it was really an amazing experience, especially for me having come into the show in 1983, then I did the film the next year. It was the furthest thing from my mind until Kenny Leon called me while I was sitting in a parking lot at Trader Joe’s in Burbank. I didn’t know they were remounting Soldier’s Play, I didn’t know it was the 50th anniversary of the NEC, I didn’t know it had never been done on Broadway. I assumed it already had. So to come back around and re-experience and re-examine this play and this piece that has been with me has been a real gift. It’s been awesome.

I really have no regrets. I feel like we have been incredibly fortunate to have gotten this far in our run. This play, this character, this production required everything of me, physically and emotionally. I could not walk into the theater or ever go on that stage and just walk through it. I just couldn’t do it. Though I walk away and I know I left everything there. I mean, take it or leave it, accept it or reject it, I have no regrets. I know that from the table read on, the entire company, these guys half my age, we all brought it, man. That’s one of those rare feats that I enjoy. I feel total joy and humbled and pride and respect. I have so much love, I know I’ll see these guys and work with them again.

At some point Broadway will bounce back as it always does. Are you inclined after this experience to come back and do another play?

Absolutely, I’ve got to do it while I can still remember lines! I enjoy it so much, it’s a unique thing. You know I was talking to an actor in L.A. and I was like, “Yeah, I’m going to do this show on Broadway.” And he looks at me and he goes, “I don’t get it with plays, why would you want to do the same thing over and over again?” I just looked at him like a lunatic. I mean, that’s what I trained for, that’s what I live for, to walk into the theater every night and attempt once again to get it right, to experience it, to take that ride. And to be that close to the audience that you can feel them, you can smell them, you can hear them breathe along with us. You’re either in it or you’re not. I had no answer for him.

David, what’s next for you?

I’ll tell you what was supposed to be next: Literally within 72 hours I was going to start on a pilot called Prospect for ABC/Disney. But like every other pilot it’s been put on hold. I think we’ve been delayed for two weeks and then we’ll reassess. Given the situation I’ve no idea when we’ll go back to work, like everyone else. After that, I was going to do Queen Sugar and reprise a role I did last season, and then do some live dates. But everything’s been put on hold till we figure out what’s going on. My next project right now in isolation with my daughter is TikTok. She’s gonna teach me how to do a dance called Renegade and we’ll post it. That’s my next project. 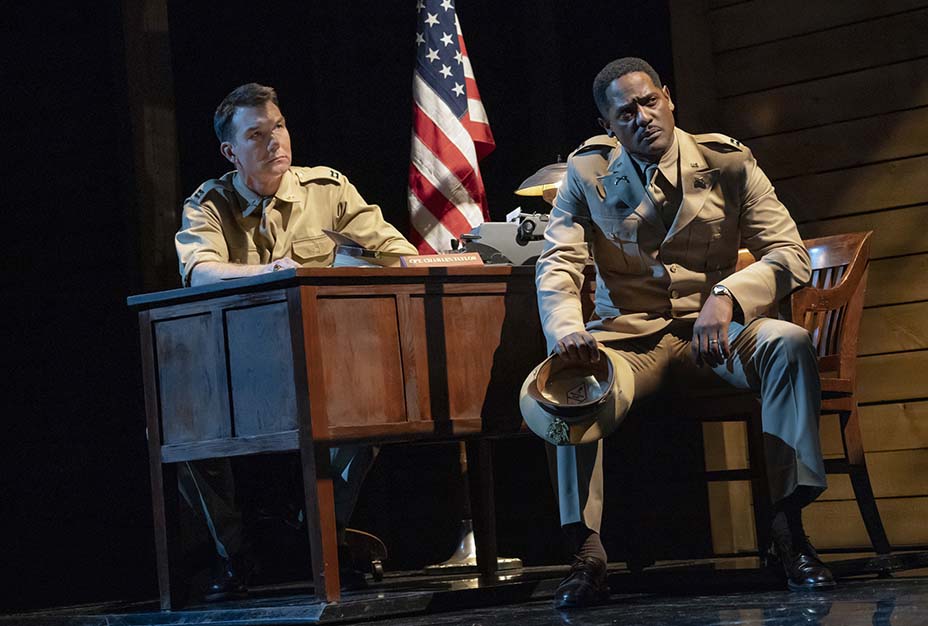