Heavens to Murgatroyd. This January, Hanna-Barbera’s classic cartoon character Snagglepuss is being revived by DC Entertainment, but Exit Stage Left: The Snagglepuss Chronicles is anything but a strict reboot of the pink mountain lion with particularly refined sensibilities.

The six-issue series is written by Mark Russell, who turned The Flintstones into one of the most critically acclaimed comics in recent memory, and features art by Mike Feehan. Exit Stage Left reimagines Snagglepuss as a closeted gay playwright from the south who just happens to be the hottest thing on Broadway… but will he be able to stay in that role and speak out against the many social injustices happening all around him?

Heat Vision has the two covers to the first issue — by Ben Caldwell (above) and Evan “Doc” Shaner (below) — and also talked to Russell about how he ended up bringing the beloved animated lion into his new position in life.

Given your work on The Flintstones and Prez, it only feels natural for you to handle a reboot of Snagglepuss that is a social satire on mid-20th Century New York and today’s society as well … but at the same time, how did you end up working on Snagglepuss of all characters?

It just kind of happened by accident. I was just tweeting funny lines I thought Snagglepuss would say, if he were Tennessee Williams — some kind of Southern Gothic playwright — and Marie Javins, my editor, thought they were funny and she talked to Dan [Didio, DC co-publisher] about turning that into a comic. That’s how it started. It was really just funny tweets and it just ballooned from there.

You’re obviously a fan of the classic Snagglepuss. He has this over-the-top voice that allows him to get away with saying things like, as you said, this Southern Gothic material, without coming across as being too harsh. Is that how you see him as well?

I think that’s very astute. The way I write him, he’s kind of an avant-garde figure for the times — people kind of expect him to say things that are edgy, and witty. In a way, he’s allowed to breach subjects and say things in 1953 in New York that other people simply could not.

You’re able to do a similar thing in this comic. Your character is a human-size pink tiger who talks, which gives you license to say thing that are — I don’t want to say controversial — but you can make comments that perhaps people aren’t expecting in Exit Stage Left.

I feel like most people judge people by their hearts, by their intentions, more than what they actually say. I wanted to make Snagglepuss a heroic figure, and make him kind of lovable so that when he does say something kind of controversial, you assume it comes from a place of dignity and love for people. It shouldn’t come across as mean or acerbic.

When you said not acerbic or mean, my mind immediately went to Twitter, which can reward both of those things. But, at the same time, when Exit Stage Left was first announced, and especially when the preview ran earlier this year in the Suicide Squad/Banana Splits issue, it was so embraced by people online, and especially that it was so heartfelt. Was that surprising?

I’m also glad when people get what I’m trying to do. It’s such a relief when they understand that you’re not trying to assassinate this character, or that they trust you to be respectful yet original and satirical with the character at the same time. It’s a really delicate thing to pull off, and I’m really happy that people, so far, seem to be trusting me with that responsibility.

The Flintstones earned you a lot of goodwill, and I think that’s what makes people as curious and excited about Exit Stage Left as they are. It’s in the Flintstones DNA to comment on modern society, that’s what the original show also set out to do to a degree, but I think Exit Stage Left offers the chance for you to give voice to people who didn’t necessarily have a say in society in the 1950s. Or today, even.

I think that’s right. Snagglepuss in this story is having to live a double life as a gay playwright living in New York, and he’s closeted. But he has values and integrity as an artist, and he’s trying to stand up for people who otherwise would be shoved under the stairs in this time of great national paranoia in the Red Scare mentality. It’s very easy in a time of national catastrophe — of perceived national catastrophe — to throw people under the sink and forget about them, and Snagglepuss is unwilling to let them do that to people he knows and loves. He’s willing to stand up for people when the rest of the country is not.

In a lot of ways, that frees me up to say what I think about what’s going on in the world now, just putting it in the context of 1953 America.

When you’ve been watching what’s been happening in the world, are you surprised that there are such echoes between the period you’re writing about and today?

Somebody once said that history never repeats itself, it just rhymes an awful lot. Unfortunately, there are these themes in history — particularly American history — that never really seem to go away. Themes like marginalizing minorities and immigrants, using fear of military threats to make people go along with abuse. These themes quiet down every now and again, but they never seem to go away, so unfortunately, when you’re writing about these things, they will always be timely or relevant.

Something you demonstrated with Flintstones, and in the Exit Stage Left preview strip, is that there’s a great kindness to your work. Are you conscious of who you’re speaking on behalf of with these comics? Is that something that informs the way you approach something like this?

I don’t really feel a responsibility to talk on behalf of anyone else — I don’t really feel that’s what I’m doing, I just speak from my heart about things that matter to me. I don’t worry too much about getting it right, or misrepresenting other people. I’m really just representing myself. But my political philosophy — my philosophy in general — is that I just want the human race to play nice with itself. To me, that’s the most boring, obvious ideology a person can have, and it’s amazing to me, I’m continually amazed, how controversial or edgy people think that is. To me, this should be the natural state of affairs, and isn’t it weird that it’s not?

Are there times when you think, I get to put forward this philosophy, and it’s through the voice of a pink gay lion?

It’s so surreal. This is never what I imagined from life, but I will totally take it. This is a dream come true — I get to write whatever I can think of, and someone else has to draw it. Think of the power! The fact that it’s a pink lion, or a caveman, gives me the license to say all these things and people don’t really take it that personally. It’s hard to get offended at something a big pink lion is saying and not feel silly about yourself. 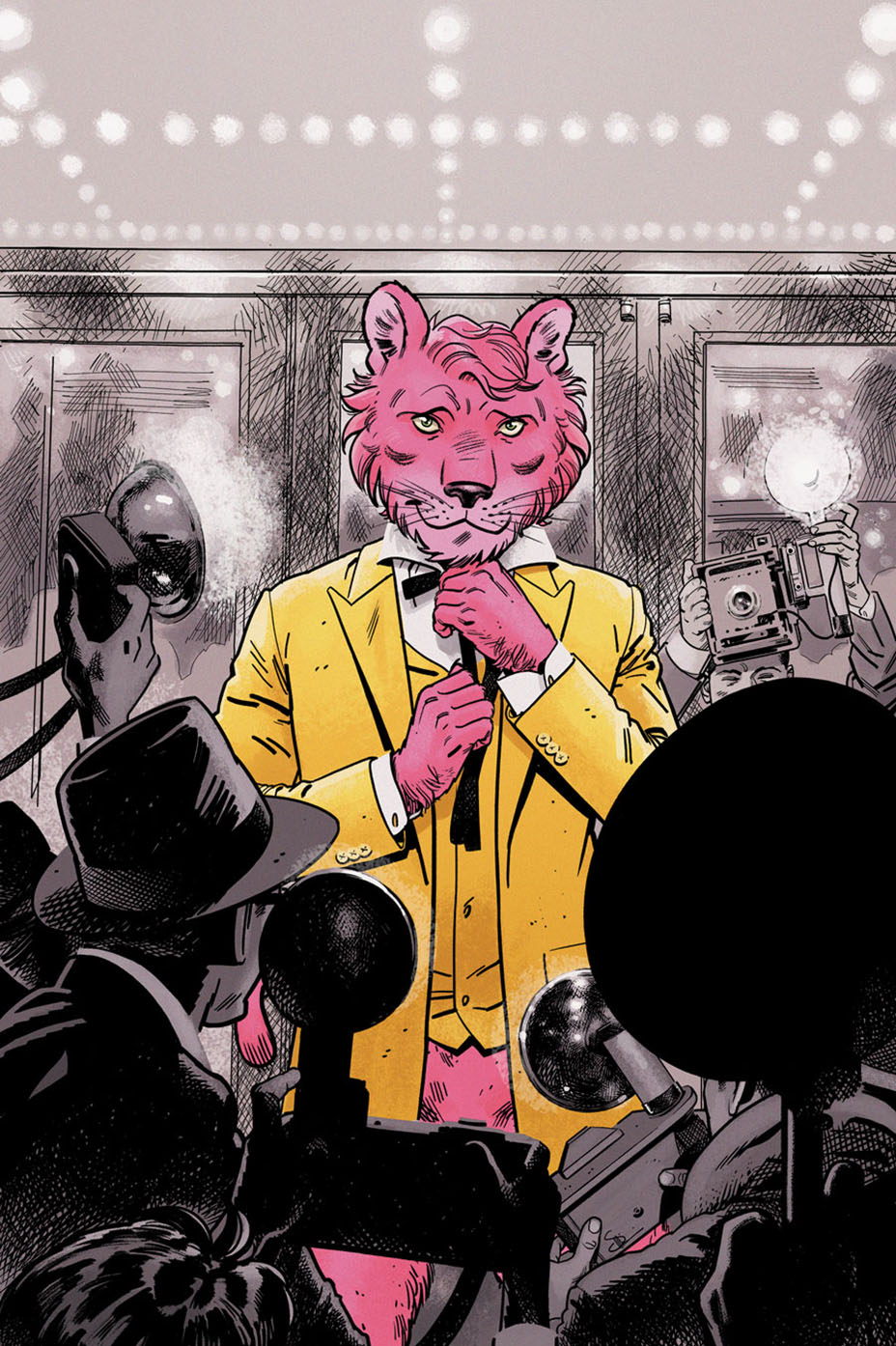