A year after it was last sighted, DC’s Young Animal is re-emerging from hibernation with a new incarnation again set to push at the limits of what DC’s superhero properties are capable of, with The Umbrella Academy co-creator Gerard Way once again at the helm.

The first incarnation of DC’s Young Animal, the first of DC’s “pop-up” imprints — similar setups for both Warren Ellis (The Wild Storm) and Brian Michael Bendis (Wonder Comics) have since debuted — launched in 2016 with Way writing a relaunch of Doom Patrol. That series, retitled Doom Patrol: Weight of the Worlds and now created with co-writer Jeremy Lambert and a host of artists including James Harvey, Doc Shaner and Becky Cloonan, will return to anchor the new incarnation of the line, accompanied by two all-new titles, Collapser and Far Sector.

Heat Vision talked to Way about the return of Young Animal, the new series, and what the future of Doom Patrol looks like.

Let’s start with the fact that the imprint is coming back. What is Young Animal this time around? Where’s your head out with Young Animal right now?

You know, it’s interesting. Young Animal for me, I know it’s a pop-up imprint, and it kind of popped up and popped up in the way when it’s done putting series out, but it never stopped for me. I’ve been writing Doom Patrol pretty consistently since the last wave. Now, Umbrella Academy is also in my life again, so basically I’m writing two books all the time; I’m writing Umbrella and I’m writing Doom. The idea this time with Doom was really to stockpile a bunch of issues, so that way we don’t run into any of the issues we had last time, with issues running extremely late and things like that.

I think the thing about this particular wave, or phase three of Young Animal, is just to have a lot of fun, you know? We’ve also now expanded to go beyond just comic book creators; we’ve got N.K. Jemisin, who’s an extremely accomplished science fiction author, and she’s amazing. We’ve asked her to do a Green Lantern story and she really wanted to do it and it’s been amazing. The intention is to try and have a lot of fun and, in the case of Far Sector [Jemisin’s series with artist Jamal Campbell, coming later in 2019], try to tell a pretty important story about authority. 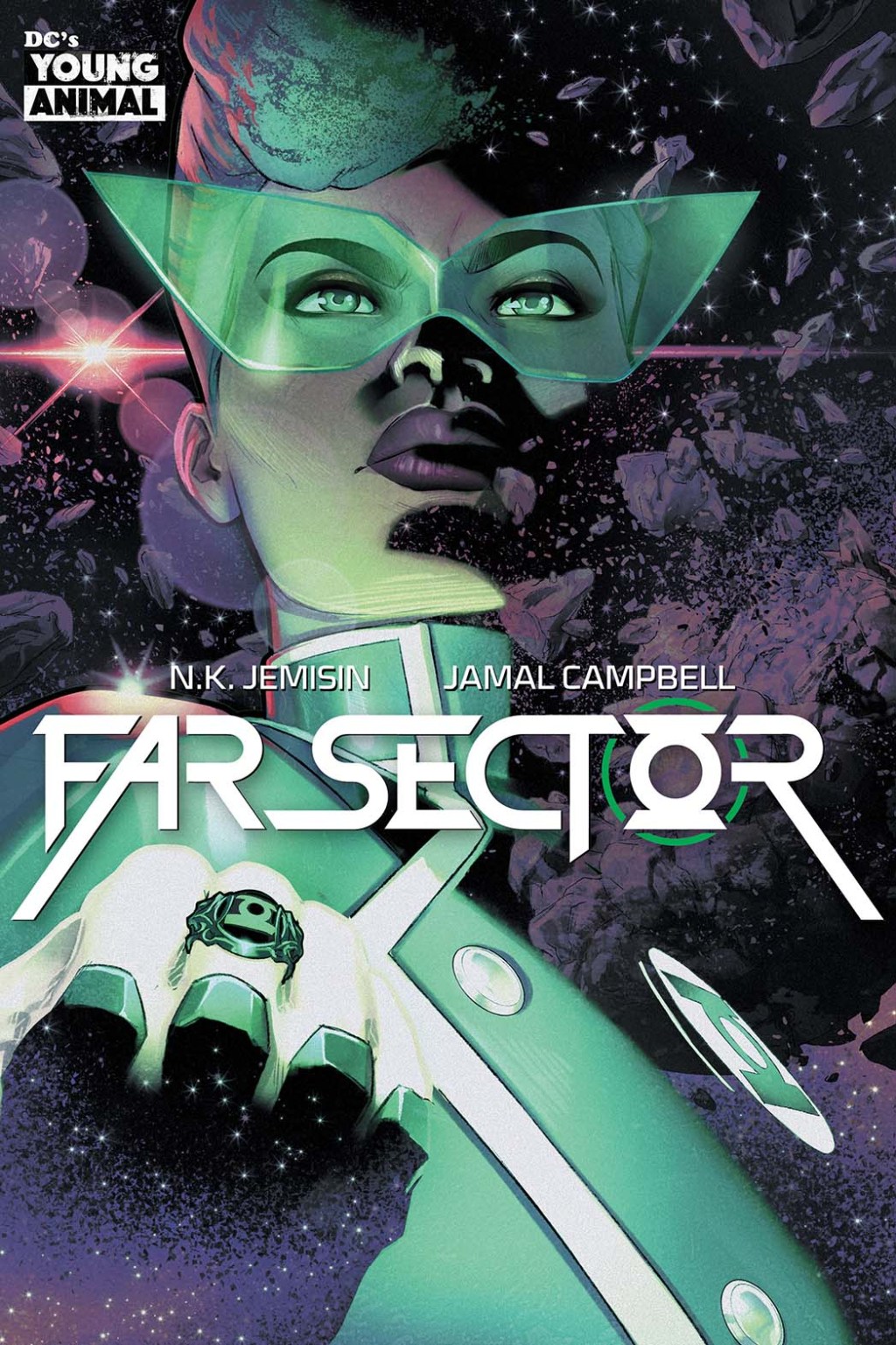 One of the things I really liked about the previous incarnations of Young Animal — and it’s present here as well — is, you’re taking DC concepts, previously Shade or Cave Carson, as well as Doom Patrol, and you’re telling stories that are personal stories, that are individual stories that stand outside of the superhero norm. Far Sector seems to continue that intent.

Yeah. The thing about Far Sector is — I mean, I really want Nora to talk about this herself and get her messaging out, but it explores authority in a way that I don’t think I’ve seen it explored before, as it relates to a superhero with authority, on a on a planet that never had a murder before. It goes deep on that.

It feels like it’s finding different ways into the material, in ways that appeal to other readers appeal to people who haven’t been reading this stuff for years and haven’t grown up with it. With Collapser, it looks like an entirely new concept, an entirely new addition to not only Young Animal but as a line. What are the origins of Collapser?

Collapser is something that my brother Mikey Way came up with — this isn’t his comic book debut, he had written a Hallowe’en Special Batman quite some time ago — but he and Shawn Simon, who is sometimes my co-writer, had been developing this story about something that was really connected to stars. It was a very positive character, but the longer they worked on it, the more it became apparent that the more interesting character was the bad guy, who was a black hole. So then the series came about this other character who’s a black hole; one of the things I really love about Collapser is that it treats anxiety as if it’s another character, and really explores that in a way that I hadn’t seen explored in comics before. 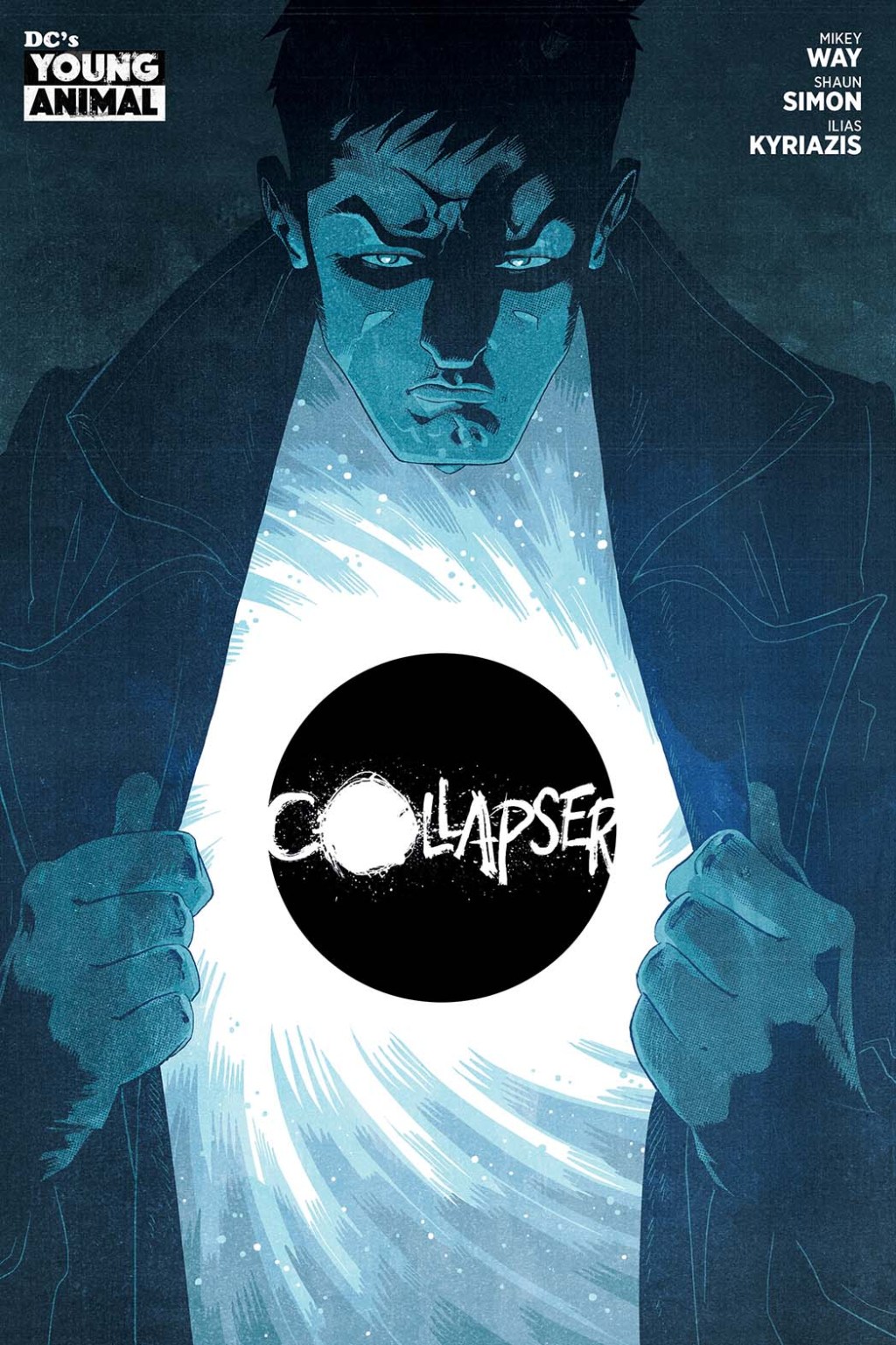 Yeah, for sure. It’s important to find new things to say about it. I think it’s also important to be really relatable, and for the stories to have a lot of heart. I don’t think that the weirdness is for weirdness’ sake; I think there’s a ton of heart, and there’s a message in there.

That’s the best pivot to Doom Patrol that you could have offered, because there was great heart in that series; despite the weirdness, it felt like a story about real people going through real things, and very relatable things. Where you left the characters after the “Milk Wars” crossover that closed out the last volume, everything felt very opened up; you transformed Robotman back into being human, Casey had discovered that her very idea of what she was was entirely wrong. Where are you going with this?

You totally nailed it; I have opened everything up. That’s the trick. The work that I was doing with Steve Orlando [Way’s co-writer on “Milk Wars”], we really did leave it open. And now we’re really at a place where — the first 11 issues of the last series, it’s really me stressed out and trying to work out how to write Doom Patrol. And granted, there’s a lot of personal things in there, about how I feel about the world that I was about to inject in there, and that made me really happy, but I was really stressed out the entire time. Like, “what are people going to think of this?”

I was kind of white knuckling my way through it, and then once I got to this new series, I thought, “You know what? I just want to have fun. I just want to really exploit the characters and just make each issue feel like it’s own adventure.”

And to that end, each issue is likely to feel like its own adventure because you’re working with an incredible lineup of artists on this series. Previously, you were writing for Nick throughout the entire run; what is it like writing for all these different artists now? Does it open up the characters even more?

I don’t even like to write something if I don’t know who the artist is going to be. The way I like to write, and the way my co-writer Jeremy Lambert likes to write, and we’ll get to him in a minute, is that I like to write for the specific artist. I take it very seriously; I look at all of their work that I can find and then I write to their strengths, and also try to figure out ways I can stretch them and push them and make them push their limits. Luckily, all the artists that we’re working with on this volume of Doom Patrol are artists that want to push their limits and push the limits of what comics can do.

Let’s talk about Jeremy for a second. What’s the collaborative process like with him? What does he bring to the series?

It’s amazing. You know, I feel like I’ve loosened up with Jeremy. It was really nice for those moments where you get stuck to have another person there and another perspective. And the process is really fluid. When I think it’s at its best and we’re at our best is when we’re both in the same office, we have two desks in my office at the studio. We both write a live document at the same time, going back and forth, talking to each other, and that’s kind of the process. We wrote a single issue — one of my favorite issues — we wrote in 18 hours.

Jeremy co-wrote the last issue of the previous run, No. 12, right? Is that issue a sort of signpost of what you’re doing with this new series?

In the sense that it has this stand-alone, one-off adventure feeling, it’s very much like the Doom Patrol that’s coming, but in a lot of ways, it’s also very different. But there is a thread — that’s the cool thing, we kept the thread really strong but running in the background for the whole series so that readers can get a full single issue experience with every issue that they’re reading. There is something happening in the background, but the focus isn’t on that thread. The focus is on, what has been happening to these people? What are they doing?

You know you said that the first year had been had felt like you were stressing and “How do I write the Doom Patrol?” You’re talking now about the new series having a focus on fun playfulness and exploration. Do you have a sense that, now, these characters are yours and now you can play, for want of a better way of putting it?

Absolutely. I feel like I’ve spent enough time with them now that I know who they are, even someone like Cliff [Steele, AKA Robotman, who’s been part of the franchise since its very first comic incarnation]. At this point, I’m at the point where he feels more like my Cliff now, rather than me trying to write someone else’s version of Cliff.

I feel that you build sort of a coherent idea of the Doom Patrol through Casey, through Danny, and through Cliff and Negative Man as well — it’s a team that has been around since the 1960s, but do you have an idea of where the Doom Patrol is in 2019? Especially now that they’re on television as well as in comic books.

The idea of them wanting to help makes me think of the fact that, especially in your version of the team — as well as in, say, Grant Morrison’s — Doom Patrol is an unusually kind and generous comic book. It’s not just trying to help the characters, but the readers, as well. It feels like a comic that really wants to help the reader as much as anything.

Yeah. To me, absolutely — it is a comic about helping, and that wants to help the reader, too. It’s kind of like group therapy, or self-help. It was such a dark time in the world, well, it still is such a dark time, when I started writing Doom Patrol. I felt the world desperately needed something positive, and the world desperately needed some hope, and some help, a place — like a comic they could go to, to feel good about something for a change.

That hasn’t changed. It’s still that. But at a certain point, with Jeremy especially, it’s really started to become an exercise in how much positive energy we can put out there. That’s the real experiment of the series: How much positivity can we inject, without going overboard or losing the plot.

Doom Patrol: Weight of the Worlds launches July 3 with the first issue illustrated by James Harvey. Collapser launches July 17, and Far Sector is coming in 2019.