When it debuted on Broadway in December 2016, Dear Evan Hansen was that rarest of modern-day musicals — a wholly original, baked-from-scratch piece with an unfamiliar score by emerging songwriters and a book that actually told an all-new story. It was the very opposite of the risk-minimizing formulas that have always been around in some shape or another on Broadway, but in recent years have dominated to a fault: endless brand extensions of films, books and (albeit glorious) iconic Billboard catalogs.

The young audiences who have feverishly propelled this show about a friendless student and a lie that explodes on social media, have made Spotify stars of songs such as “You Will Be Found,” “For Forever” and “Waving Through a Window.” Last year, the show’s original cast album debuted in Billboard‘s Top 10 — the highest ranking of any Broadway soundtrack since 1961. This year, it won the Grammy for best musical theater album. The cast even won a Daytime Emmy for its performance of “You Will Be Found” on The Today Show.

All this, before we even mention the career-making, Tony-winning performances of its original stars Ben Platt as Evan and Rachel Bay Jones as his mother Heidi — as well as the smashing of box-office records in New York and now on the road, where reps for the Ahmanson Theatre say the Los Angeles stop alone is expected to gross over $12 million.

What’s really driving all this? While a handful of the songs really are good, DEH is a rarity in another way: The book by Steven Levenson doesn’t just resonate, it’s gripping. Take out all the music and you’ve still got a terrific drama — the very opposite of many current musicals in which forced dialogue pasted between hit songs masquerades as “narrative.”

By now the story is well known. Evan Hansen, a nerd yearning to connect, finds himself unwittingly at the center of a lie. A letter Evan has written to himself as a self-awareness pep-talk assignment from his therapist — “Dear Evan Hansen,” it begins — ends up in the taunting hands of high school bully Connor Murphy (Marrick Smith), who later kills himself. When Connor’s parents find the letter, they mistake it for their son’s suicide note. Devastated and seeking to understand Connor’s death, the Murphys desperately cleave onto Evan and draw him into their family. 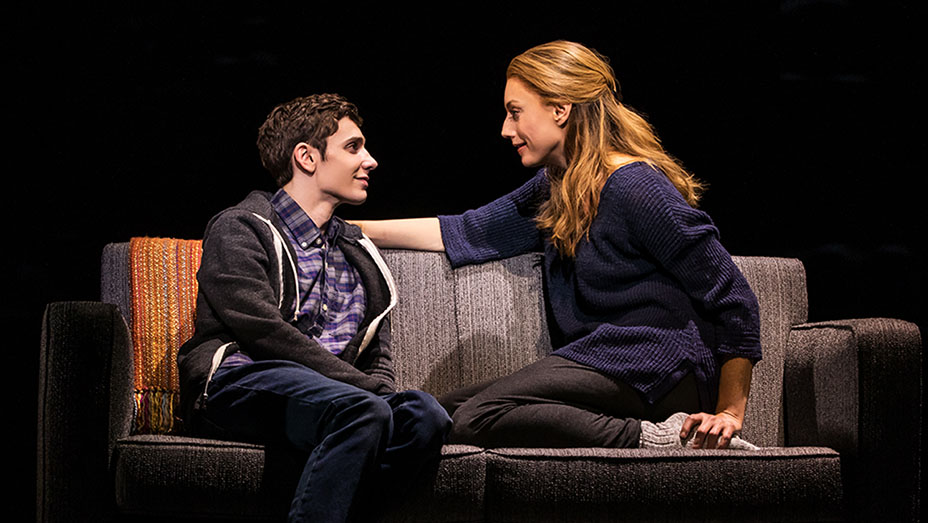 Of course Evan could correct this misunderstanding at any time, but when he sees how relieved the Murphys are to learn that Connor had even one good friend, he is buoyed by the connection and begins embellishing. Classmates latch on to the tale — Evan becomes popular, important, even loved. Lies beget lies, events spiral — and go viral.

Stepping into Platt’s impossible-to-fill shoes is promising newcomer Ben Levi Ross, an understudy from the New York cast, who has his own deft take on the role. Ross plays Evan as more of a geek — skinny, scared and craving any human attention, particularly at home where his overworked mom Heidi (a fantastic Jessica Phillips) is stressed to the limit. Their Act II heart-tuggers — his “Words Fail” and hers “So Big/So Small” — had Friday’s opening-night Ahmanson crowd (jammed with power players and superstars) choking back tears.

But Ross is even more effective on the show’s better songs such as “For Forever,” during which he bravely imagines what it might be like to have a real pal — “just two friends on a perfect day.” Later, during “To Break in a Glove,” a wrenching duet with Aaron Lazar as Connor’s father, Evan allows himself to think (just a little) about having a dad. Yes, the manipulation runs high, but it works.

Another newcomer making a terrific debut is Phoebe Koyabe as Alana Beck, an Elle Woods type who monetizes Connor’s suicide for maximum social media gain and her own popularity. And Jared Goldsmith as Evan’s only almost-friend, Jared Kleinman, stands out as the rapid-fire deliverer of comic bits about back-dated emails and the meaning of “family friend.”

Peter Nigrini’s stirring projections lay out the social media firestorm; its highs, lows and landmines presented with exquisite precision. Danny Mefford’s brief choreographic sequences (this is not a dancing show), particularly on the amusing “Sincerely, Me,” convey just the right mood.

Not all the songs land, and occasionally director Michael Greif (Rent, Grey Gardens) allows a little too much TV contest-style vocalizing (I don’t remember as much of that from the original Broadway cast), but overall this is a faithful recreation of the New York production. A little less volume from the musicians, particularly on “Requiem,” during which the performers battle the band and each other to be heard, would go a long way.

Though written several years ago now, DEH remains a taut commentary on our click-chasing times, even taking into account the head-snapping speed with which so many social platforms have fallen in and out of favor. And Ross, in a role that is one of the most vocally taxing and emotionally demanding of any in current musical theater, is doing exceptional work. (Alternate Stephen Christopher Anthony steps in for two performances a week.) For anyone who ever sat alone at lunch, Dear Evan Hansen has an enduring message: You will be found.