Every awards season, fashion fans are on the edge of their seats in anticipation of which designers actresses will select for their big moment. Givenchy? Dior? YSL? Gucci?

The options, though technically limitless, seem, in fact, limited to but a handful of major fashion houses. We can’t fault actresses for gravitating towards the iconic labels for what could be the most important evening of their career, or even for letting the weighty monetary component of red-carpet dressing influence their choice. But those factors aside, we’d like to take a moment to lobby on behalf of Spanish fashion house Delpozo, which — if you ask us — is underutilized when it comes to red-carpet occasions. Hear us out.

It doesn’t have to be the Oscars, per se, but the label designed by architect turned fashion master craftsman Josep Font deserves to have a moment in the sun — we’re talking daytime photocalls at Cannes, the Indie Spirit Awards or a summer film premiere. Julianne Moore and Kiernan Shipka, two of Hollywood’s best-dressed ladies and also fans of Font, would probably concur. 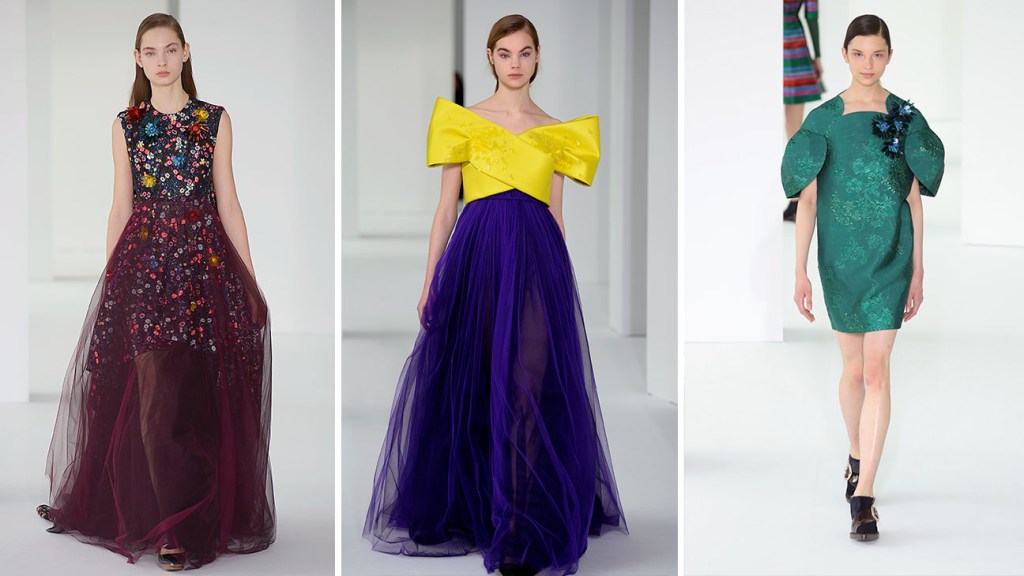 As he does every season, Font delivered for fall 2017 a few looks with an extra helping of drama, served up by way of boldly contrasting color combinations (a vibrant citron juxtaposed with a deep, royal purple), liberal use of his signature, sculptural flourishes and traditional evening wear elements such as long trains and off-the-shoulder silhouettes that wrapped around the models like bows on a present. Looks that combined full, tiered tulle skirts and elegant mini-dresses would be stunning on fashion darlings like Emma Stone, Natalie Portman or Naomie Harris.

Still don’t believe us? Let Caitriona Balfe, star of the Starz series Outlander, be our shining example. The actress was a vision of sophisticated grace at the Golden Globe Awards last month in a two-tone strapless number that we give two thumbs up.