For Denee Benton, Natasha, Pierre and the Great Comet of 1812 is many things.

Last week, the new Broadway musical — based on a 70-page section of Tolstoy’s War and Peace focusing on a young countess and the unhappy aristocrat who helps extricate her from a ruinous situation in pre-revolutionary Moscow — was quite the therapy session. “The Wednesday after the election, when New York City was in mourning, the big, crazy dance number was very satisfying because I get to smash a painting on someone’s head,” Benton told The Hollywood Reporter of the show’s second-act song. “We were definitely all letting out some frustration with that number.”

The Rachel Chavkin-directed production, hatched by composer, lyricist and book writer Dave Malloy, is also a master class in handling fame (taught by co-star Josh Groban), a confidence-building workshop and an exhaustive workout, as the Imperial Theatre is equipped with numerous sets of stairs to mimic Russian dinner theater. Oh, and it’s also Benton’s Broadway debut.

Ahead of Monday’s opening night, Benton goes Off Script to talk improvising with celebrity guests, spending time off strategically and learning invaluable lessons while on the set of Lifetime’s Unreal.

What do you admire about Natasha?

How much she trusts herself, despite all the advice she’s getting. Regardless of whether or not her decisions are bad or good, it’s such an important quality to develop — and one I’m trying to learn for myself — to trust your own heart and know that every decision is part of your path. 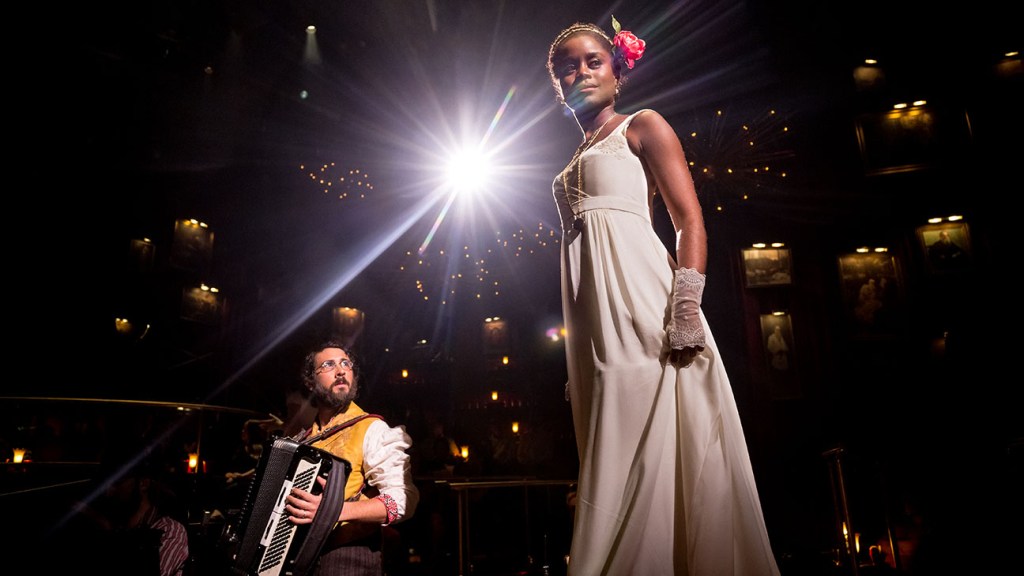 What research did you do?

I read the portion of War and Peace that our show is based on, and I’ve been making my way from the beginning since then. I didn’t get to see the off-Broadway version — I was in New York but I couldn’t get tickets! And oddly enough, my boyfriend went to high school with Phillipa Soo [who played Benton’s role in earlier productions], so we met her when we saw Hamilton, but that was before any of this had happened. I’m excited to see her at opening night.

But I connected to Natasha’s spirit right away. I understood where she was coming from at this time in her life. While I’m a few years older than her, the life lessons we’re learning right now are very similar, regarding entering adulthood and the pressure of making decisions.

You’re in nearly every number. How do you manage?

This is the hardest thing I’ve ever done, vocally and emotionally. I’ve been training with the voice teacher Liz Caplan, and Dr. Lucian Sulica at Weill Cornell Med has been monitoring my vocal folds. Plus, lots of physical therapy.

It’s a marathon, and that’s without all the stairs. While rehearsing, a lot of the stairs were just different colors of tape diagrammed on the floor, so most of the planning was finished during tech week. So I started seeing a speech pathologist and we’d do the vocal exercises in the stairwell of the building, just to get my body used to breathing, singing and running at the same time. The first few weeks, I certainly felt like I got hit by a bus at all times, but I can now finish a show and be okay.

How has your diet changed?

I treat the show like an intense workout, so I eat protein before the show and during intermission, and stretch beforehand.

What have you given up for the role?

I’m dealing with that a lot now. I have 25 or so family members who are here for the opening, and my high school bought 100 tickets to see it. I’m a textbook people-pleaser, so when I see my family [during the day], I have to set an alarm for 30 minutes and then leave. No, Denee, you can’t go get lunch with that friend; you have to call your family on Mondays because you can’t talk for three hours before a show.

I try to eliminate the word “should” from my vocabulary. There’s no “should do this,” it’s “do you want do to this?” No, fine. Do you want to lay here until three o’clock? That’s fine. It’s hard, but good.

Any memorable lesson learned from working with Josh Groban?

He’s very good at taking care of himself and managing his time. He’s been at this for so long, so he knows when to give and when to take his space, and he handles all the limelight and pressure of dealing with fans with such grace. Me being so young, I’m just taking my notebook when I’m around him.

A framed poem that my brother wrote after seeing the show.

One fan from Japan made these adorable dolls of Josh and I. They’re two inches tall and so cute and sellable. It was a very exciting moment to have a tiny action figure of myself.

Um. This picture has made me VERY HAPPY. Mini chubby cheeked me and @joshgroban are the CUTEST THINGS I’VE EVER SEEEN thank you @happy_yappy_j for these @greatcometbway miniisss!!!

You joined this show after finishing season two of Unreal. How has it helped your Broadway debut?

That was my first time ever doing television, so my learning curve was huge. In TV, there’s a lack of prep time — you have to trust the moment in a different way. The homework I do for theater makes me feel more secure; I dealt with a lot of insecurities in Unreal because you learn your scenes but you don’t have time to try them out, you just have to trust your instincts. I’m thankful for that muscle I had to build — you don’t have time to second-guess this today, you met this person five minutes ago and now you’re gonna make out with him and make it look great. I felt like a warrior in a different sense, because I felt insecure every day on set and found a way to shine through that.

The other day, Jason Alexander came to see the show, and he was sitting at the table where Princess Mary and I go sit with the audience. I wish they could’ve captured the look on both our faces as we pretended not to freak out: “Okay, now we have to act with Jason Alexander, no big deal.” I think it went well — he came backstage afterward — but we’ve asked now to be warned.