Continue to The Hollywood Reporter SKIP AD
You will be redirected back to your article in seconds
Skip to main content
March 21, 2019 9:00am
Logo text

Next week sees the release of the 1000th issue of Detective Comics, the series that not only gave the world Batman, but also gave DC its name. (Yes, that’s what the acronym stands for.) A 96-page special issue that also celebrates the 80th anniversary of Batman’s creation, Detective No. 1000, features contributions from creators including Warren Ellis, Brian Michael Bendis, Geoff Johns, Jim Lee, Greg Capullo, Becky Cloonan and Joelle Jones. It also features a very special story, “Medieval,” by Peter Tomasi and Doug Mahnke.

The 12-page short isn’t just the two long-term collaborators’ way of wishing the Dark Knight a happy birthday; it’s also the story that brings the Arkham Knight — a nemesis created for the 2015 video game Batman: Arkham Knight — into mainstream DC comic book continuity for the first time, and a mission statement for the character as they head into their first big storyline. Heat Vision talked to Mahnke and Tomasi about the short, accompanied by exclusive preview art from the story itself.

Your Detective Comics No. 1000 story is a wonderful way of celebrating the 80th anniversary of Batman; it re-examines the character, and makes a case that he’s actually this villainous creature all along. Where did that idea come from? What made you think, “Oh, for this big high-profile issue we’re going to do a story we essentially argue that Batman is a bad guy”?

Tomasi: It comes from the Arkham Knight, from their perspective as it plays out from that story — and then of course through the subsequent storyline. We really start to peel back the layers to their perspective, which, due to their upbringing, is very much tainted by [the idea of] Batman being a villain. In Arkham Knight’s eyes, Batman is just a dark black hole over Gotham, and continues to suck the life energy out of it.

So it all stems from really examining Arkham Knight, and what this new character is all about, and making sure it played a central part in the origin. In the origin of the Arkham Knight, Batman is most definitely a villain.

It’s funny because it’s actually a convincing argument to make. It’s played out in this story; from a certain perspective, Batman is a villain, or at least, not a good guy.

Tomasi: That’s definitely what we wanted to do. We wanted, with Doug’s artwork, to balance out people’s ideas of Batman. There’s no quiet moments. Batman is definitely in all-action mode.

Mahnke: He’s got to be the easiest character to draw in that way. He’s a good guy who actually looks primarily like a bad guy half the time. That’s one of the most enjoyable things to even do with Batman. You draw this character, who is always angry and grimacing, but he always has to bring his A-Game, which has got to be really brutal. 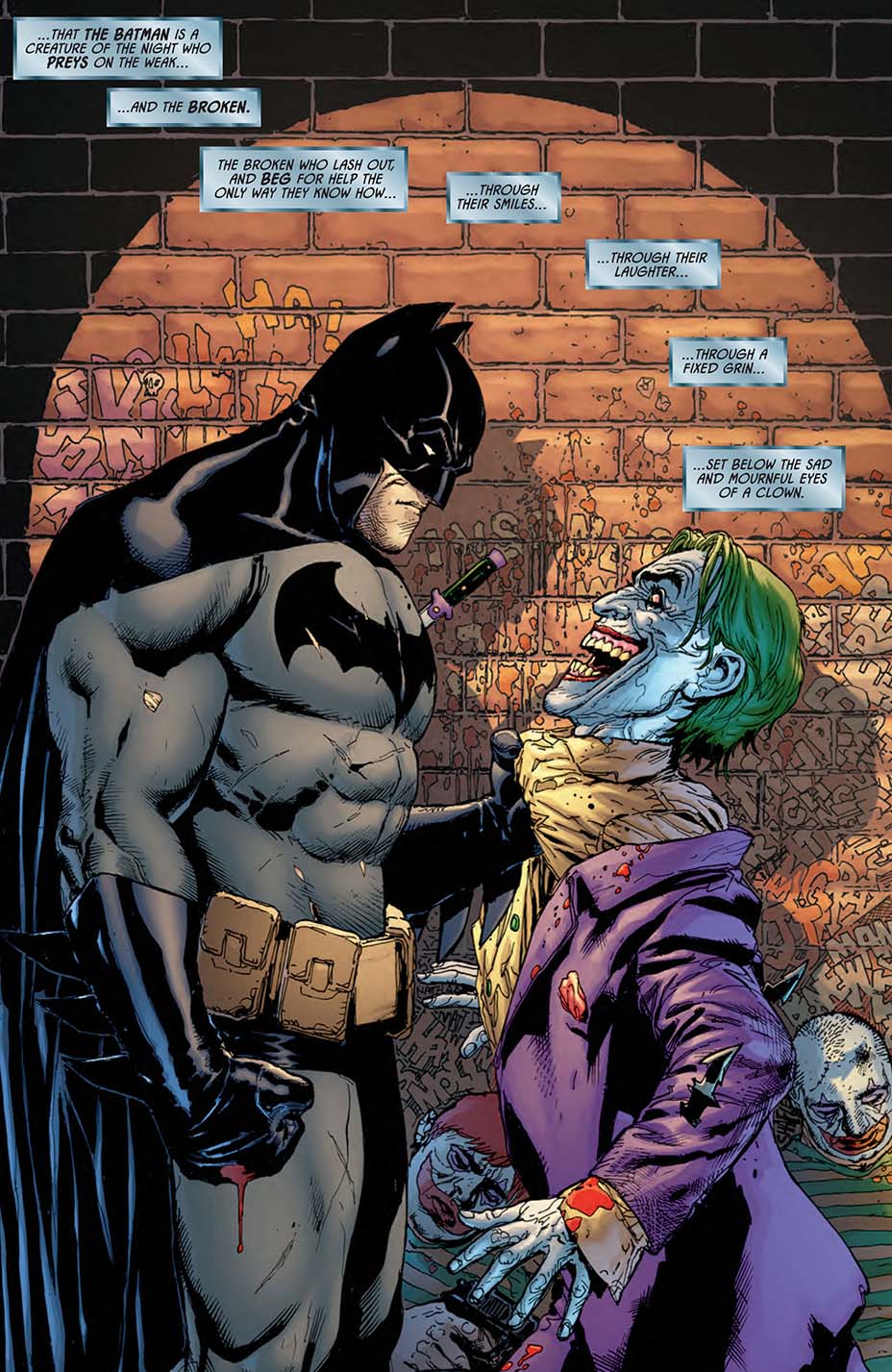 What’s interesting about this story is that all of your old images are classic Batman images, but because they’re playing against a particularly skewed narration, the reader is left with this feeling of, “Oh, that’s right — he is this dark, mysterious, unsettling character.” He’s meant to, and has always been explained to, strike fear into the hearts of the villains. The reader sees him from that perspective in this story, being the scary character.

Tomasi: He plays that way for a lot of people, not just villains. You’d have to imagine, just the way Doug said a minute ago, how Batman can be definitely seen as a bad guy just by the way he looks. Even Gothamites would definitely be kind of scared shitless to see Batman moving among them, even though he’s kicking the ass of bad guys.

Mahnke: My favorite is when he’s going after Killer Croc because Croc can just devour a human being. I was thinking, “How the hell did this guy wrangle this monster? Well, he’s got to be a bigger monster than Croc, basically.” So, just the idea of just showing Croc being brutalized by Batman is actually really pleasurable to draw. It was fun as hell. [Laughs] How else do they take on this monster? You know, with absolute unbridled brutality.

Tomasi: It’s funny, though; the [Detective Comics #1000] story could change with just different captions also — I mean, just that juxtaposition of the words and Doug’s images just brings out just a completely different feel to to what Batman can represent. It was pretty cool to have done Action Comics No. 1000, and really portray Superman and his family in that heroic light, and then on Detective 1000, flip the table completely, and just play Batman as a complete villain.

Tomasi: In the end, I just wanted to see Doug draw iconic moments. I knew there would be certain spots I’d want to play with. Picking the Ra’s one was key, because I wanted to play about what someone could perceive as, you know, dealing with someone like Ra’s and the Lazarus Pit and having that kind of knowledge and imagining that Batman could be even immortal at this point, you know? Be an un-killable machine, because he seems to be, he’s always coming back no matter what happens to him.

And then, it was just basically like, Doug had never really drawn Bane. Obviously we had to get Bane in there, and we had to get the Joker there.

Mahnke: We said, “Hey, what do you want to do?” Throwing out the list of characters, the [classic] rogues gallery and expanding it a bit to include some of the more modern things, like characters Pete has developed. It was fun, but of course, we had to leave a few things undone or group them together. It went by much too fast and it just really wasn’t enough. 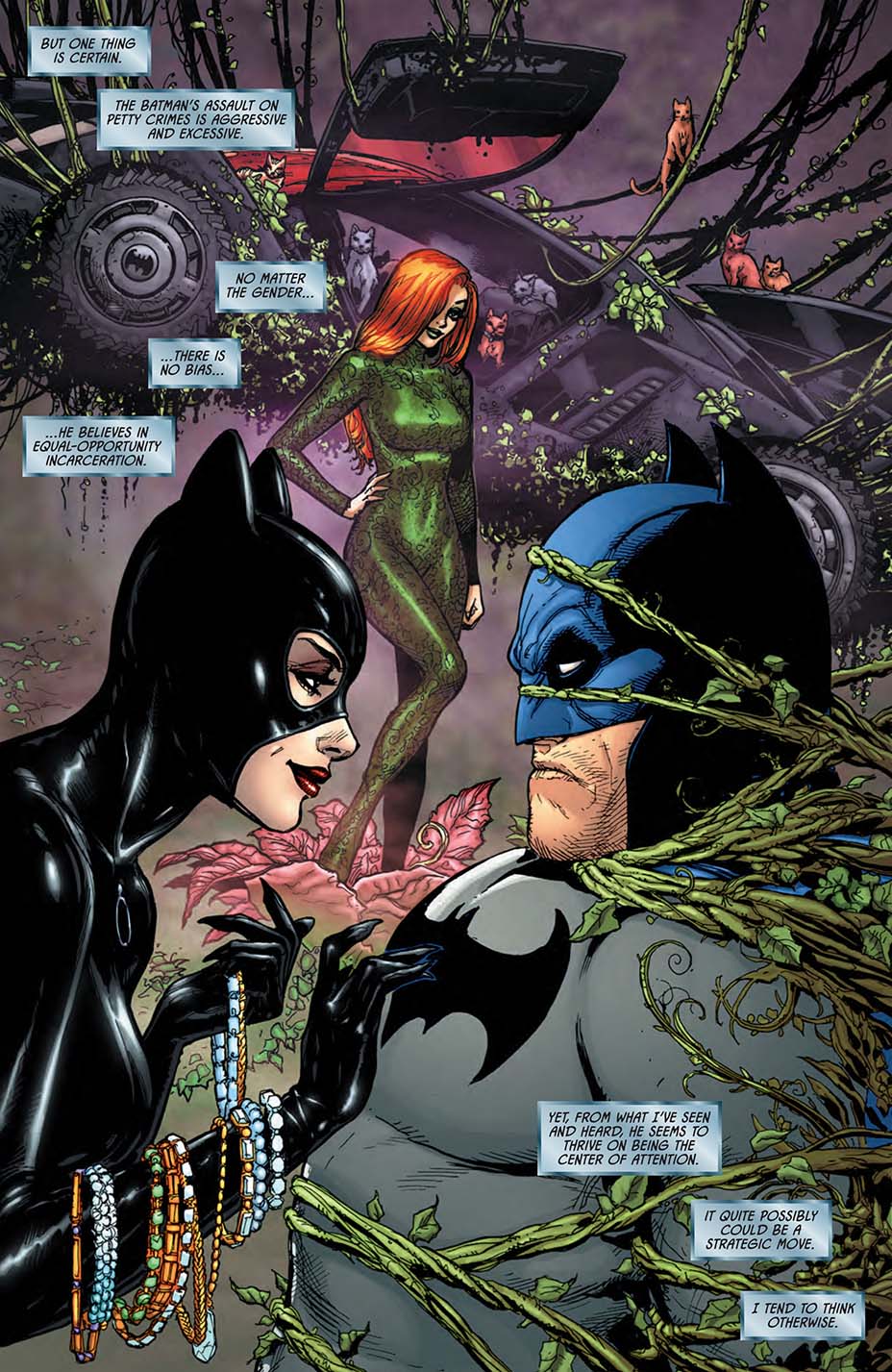 Tomasi: It would’ve been nice to have another three or four extra pages to separate Harley, or to separate Catwoman for her own shot. But with the page count being what it was, it was key to have to compress a few of those shots. You have to step back generationally and say, “OK, these are characters that Doug and I loved when we reading comics at first, or a few years later,” but then you’re like, “There’s a whole another 10 years — a generation, almost — since the New 52, which is crazy to think about. Somebody’s first Batman comic was [Scott Snyder’s] “Court of Owls,” somebody’s first Batman comic was [Tomasi and Patrick Gleason’s] Batman and Robin with the character Nobody in it. So we wanted to make sure that even the recent past was represented too.

It’s a great way of recognizing that the character means so many different things to so many different people, while also arguing the Arkham Knight’s point of view. That makes the final page so impactful, because you’ve gone through all of this, and then you introduced this new threat who — in one page, in one panel — because you read their reasoning, and then you get to see this great shot of them at the end, it’s such an introduction. It does make you go, “Where does this go next?”

Tomasi: There’s more next coming, that’s for sure. [Laughs]

I’m curious: Why is now the time to bring in the Arkham Knight? They’ve existed in video games since 2015, and there was a comic book tie-in to the game, but why now to bring them into the mainstream DC universe — and why this particular version of the character?

Tomasi: It actually came up during a breakfast with me and [DC publisher] Dan DiDio. We were just trying to figure out what could shake up Batman’s rogues gallery and at this point in time so we just started looking at things and I had written a lot of Arkham Knight — I had written a lot of chapters of the comic book prologue leading up to the recent game and, kind of really enjoyed writing the character. But my main thing was, I was like, “Look if I do Arkham Knight, I want to just bring someone into the character who is someone different.” They have a whole new origin and just really embrace the Arkham Knight name, and just really kind of run with it. Dan really liked the idea and said, “Let’s go, let’s do it.” We double checked with the guys behind the video game and they were hyped up with this version of the character.

The reader goes through the entire story and gets their point of view very clearly — you know who this Arkham Knight is, but also you have no idea who this character is on the final page. The first time you seem them, they’re in the costume, they’re in the armor and there is no clue as to their identity. 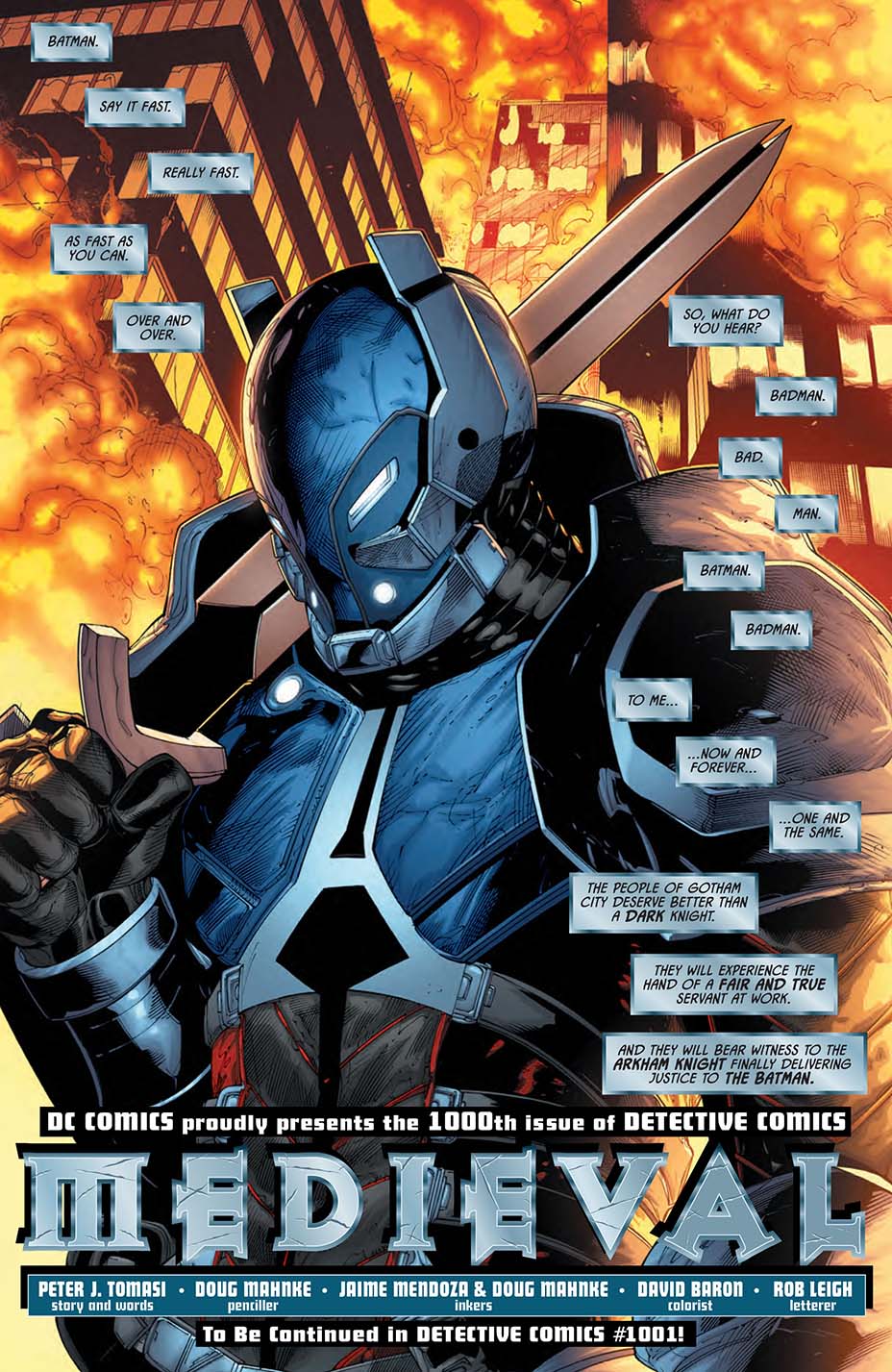 Mahnke: Anytime you do an upshot, when you get to frame that character looking up, which is also such a heroic device to use, to try to create an image of greatness, I mean that’s pretty much why we are using that type of imagery: to cap off the whole concept, like this character is believing it’s a force for good.

Tomasi: It’s playing with that whole adage that the best heroes really truly believe they’re the hero. In this case we really wanted it to be to the nth degree, and this character really really feels it’s there to save Gotham and destroy Batman for no reason like, they’ve been in jail, or being disturbed. It’s purely a person who wants to do good.

So, the story in Detective No. 1000 sets up the following storyline, which runs from Nos. 1001 through 1005, with art from Action Comics and Aquaman’s Brad Walker; without spoiling the storyline, what role does the Arkham Knight play in what comes next?

Tomasi: They’re the main character. We’re going to have a nice big origin issue at some point — 1001 through 1005, it’s a nice chunk of pages, it’s a lot of real estate, so to speak, to tell a really good story to get into the head of Arkham Knight and you know really dive deep into the psyche. The story opens with a confrontation right off the bat, we dive into the action very very quickly. I didn’t want it to be a slow build right out of the gate; I wanted Arkham Knight to come out swinging and have a pure mission and go right at Batman for the reasons you read in 1000. We hope that everybody really digs where we’re going with it.

Detective Comics No. 1000 will be released digitally and in comic book stores March 27.