The future is here in Quantic Dream’s latest title, Detroit: Become Human, and the social, economic and ethical issues of today still loom large in the days of tomorrow.

The new game, first announced by the French game publishing company at the Paris Games Show in 2015, follows the “lives” of three androids in 2038 Detroit. Designed, and treated like, modern-day accessories such as a Google Home or smart phone, these automatons were built to make the lives of citizens easier. However, as is so often the case with futurist sci-fi delving in this subject matter, there were unforeseen complications resulting from the introduction of the new tech, such as joblessness, familial strains and the ethical ramifications of treating a machine that exhibits fundamental traits of humanity as simply an object.

Quantic Dream showed off the first two hours of the game to a small group of journalists last week, letting them get a hands-on experience with the anticipated upcoming title. For those familiar with the developer’s past titles, specifically 2010’s PS3 noir thriller Heavy Rain, the gameplay functions much the same. A fixed camera follows the character as they explore their surroundings. Players are given a bit of X and Y-axis mobility to further investigate their setting, a useful tool indeed for the game’s introductory chapter.

The game opens with Connor (Bryan Dechart), a prim android “worth a small fortune” (his own words) who works as an investigator for Detroit PD on homicide scenes. Right away, the world of Detroit 2038 and an android’s place in it is clear: you may appear human, but you certainly aren’t treated as such.

As Connor investigates the crime scene — done so in engrossing detail by allowing the player to wander throughout a lavish penthouse searching for clues and using the android’s tech to recreate the events of the murder — his interactions with the human members of the police department are chilly, at the best of times. He is treated as a foreign entity, unwelcome and met with trepidation despite his clear usefulness and calm demeanor. The situation is not helped by the fact that the crime involved a rogue android, referred to in the game as a “deviant”, who may or may not be experiencing a crisis of identity.

Androids in the game are presented as nearly indistinguishable from their human counterparts, with a few exceptions. Each is fitted with a small, glowing circle beside their right eye and they are required to wear clothes adorned with a glowing blue triangle. The imagery is stark and instantly signals the game’s aesthetic and political undertones.

After Connor’s introduction, a cinematic scene (which is a hard distinction to make as every moment in the game is beautifully cinematic in both presentation and tone) introduces the game’s most important character: the city of Detroit. As Kara (Valorie Curry), a house-cleaning droid, the player is whisked through the towering infrastructure of downtown Detroit by her new owner, reveling at the game’s spot-on reconstructions of such city landmarks as the Monument to Joe Louis and Hart Park.

Kara’s new caretaker, however, is not in the city center, but in the more run-down suburbs that border Detroit. As Kara enters the home it is clear immediately that this is a man on hard-times, most likely, at least in part, by his own doing. Empty liquor bottles and pizza boxes litter the humble abode, and the player is tasked with cleaning it all while their new owner takes in a hockey game, a few beers and a red-tinged inhalant drug that makes the future seem all the more bleak. 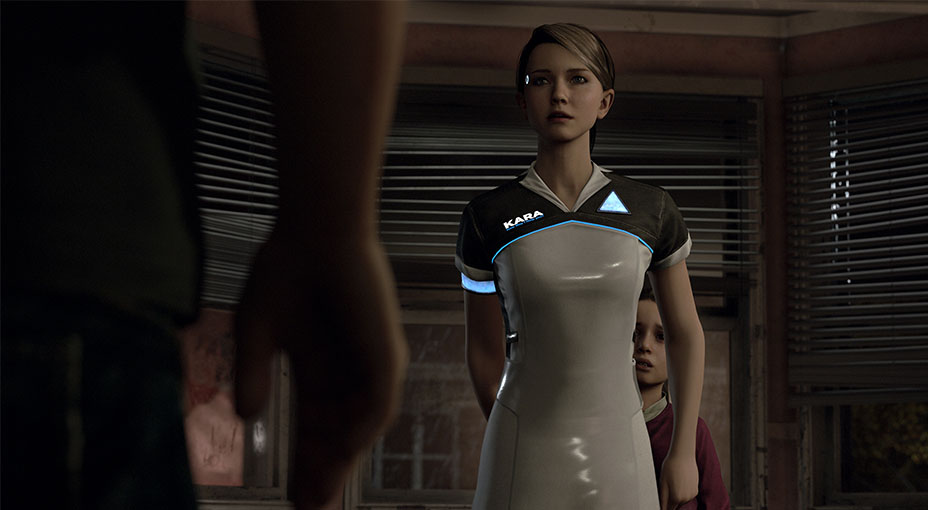 The game, even in the short demo offered by Quantic Dream, pulls no punches when it comes to emotionality, and Kara’s is one of the deepest gut shots. As it turns out, Kara’s new owner also has a small child who hides under tables with her dolls, is frightened to speak and clearly has faced some emotional, and likely physical, abuse from her elder.

Rounding out the cast of playable characters is Markus (Jesse Williams), a personal caretaker droid owned by a world-renowned painter. As like his other mechanical cohorts, Markus is not immune to social unrest as he runs afoul of anti-android protestors while buying paint for his owner. 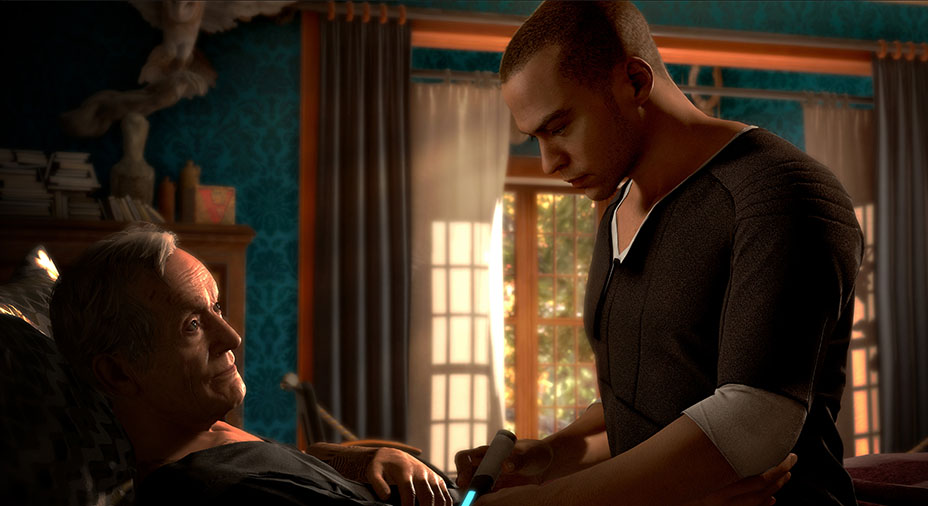 The game’s presentation is stunning, ironically rendering its characters in such detailed, life-like detail that it is hard to believe they aren’t actually their real-life thespian counterparts. Environments and details are just painstakingly recreated and as players explore their worlds it is quite common to simply sweep the camera around to drink it all in, which is good, considering the game’s slow, methodical approach to gameplay and its emphasis on uncovering your own path.

In fact, the game so encourages exploration that the end of each vignette with a particular character presents the player with a choice tree of their decisions during gameplay. Uncovering key items or interacting with certain details or characters in the environment open up new options, leading to varying outcomes. When reviewing a segment through this choice tree’s branches, one can see that various other options of undiscovered items or areas would have opened up splintering narrative paths. As such, the game invites not only enormous replay value but also inspires discussion with other players. 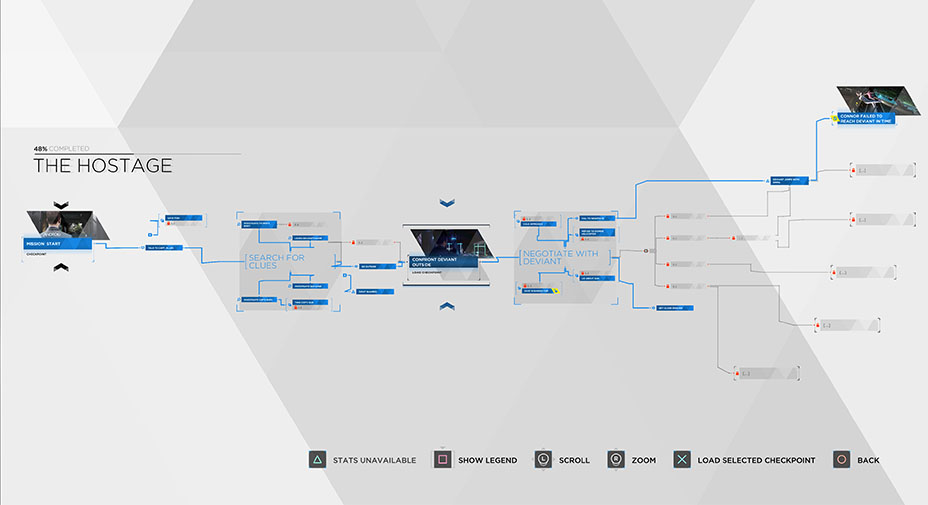 The game has a lot to say on social issues, bigotry and acceptance, but it does so, at least in the opening moments, without being overly heavy-handed. Comparisons to Blade Runner are hard to avoid, but even if they become redundant they should be taken as authentically complimentary as the game earns such collations through adult story-telling and genuine relatability to a storyline asking a very tough question: what does it mean to be human?

Detroit: Become Human is available exclusively for the Playstation 4 on May 25.