Take a quick scan of America’s current pop culture landscape and you might find yourself asking the question, is it 2017 or 1971?

There’s an abundance of ‘70s-set TV dramas, including Netflix’s serial killer deep dive, Mindhunter, and the more light-hearted Dope — both of which paint a more accurate picture of the era than say, That ‘70s Show. And fashion inspired by the decade has been trendy for a while, both on high-fashion catwalks (Calvin Klein, Gucci, Anna Sui) and at fast-fashion chains (Zara, Forever21, H&M).

When HBO’s The Deuce — a drama about the early years of New York’s pornography industry starring Maggie Gyllenhaal and James Franco — premiered earlier this fall, it was the best of both the TV and fashion worlds, earning rave reviews from critics as well as a healthy fashion following. Who knew ‘70s prostitutes would one day become style icons? 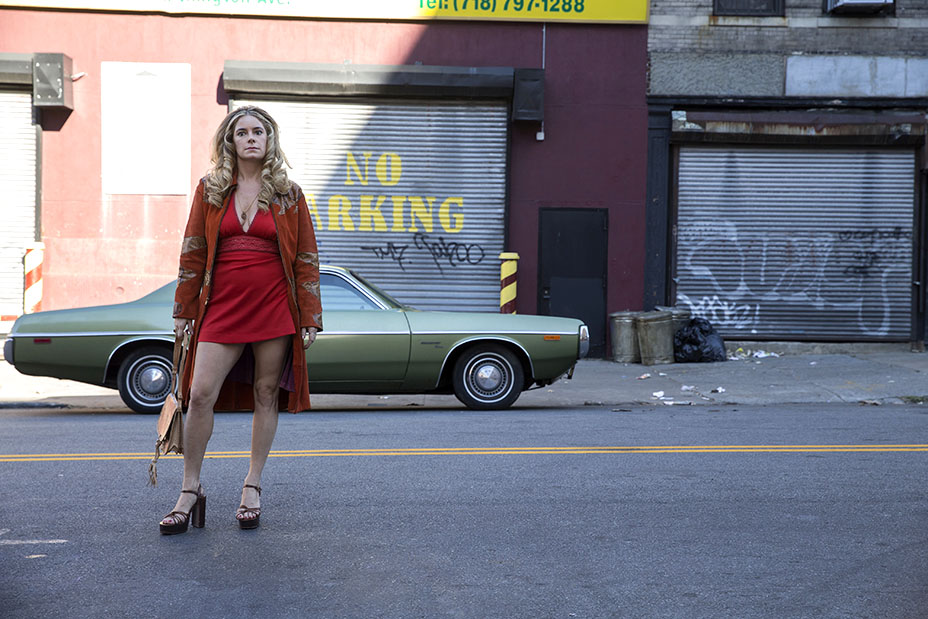 That being said, the similarities between contemporary trends and the show’s costumes were completely coincidental, according to costume designer Anna Terraza, who says that despite the the abundance of bell-bottom denim and colorful cropped knits on the market today, she pulled only from vintage stores and secondhand sellers on Etsy.

“We pulled from Rachel [Zabar] Vintage and Goodwill stores, Beacons Closet… but nothing contemporary, we wanted it to feel real,” she said, adding that her team created a few one-of-a-kind pieces as well. But Terraza did have another unique resource for authentic pieces: HBO’s short-lived drama Vinyl. 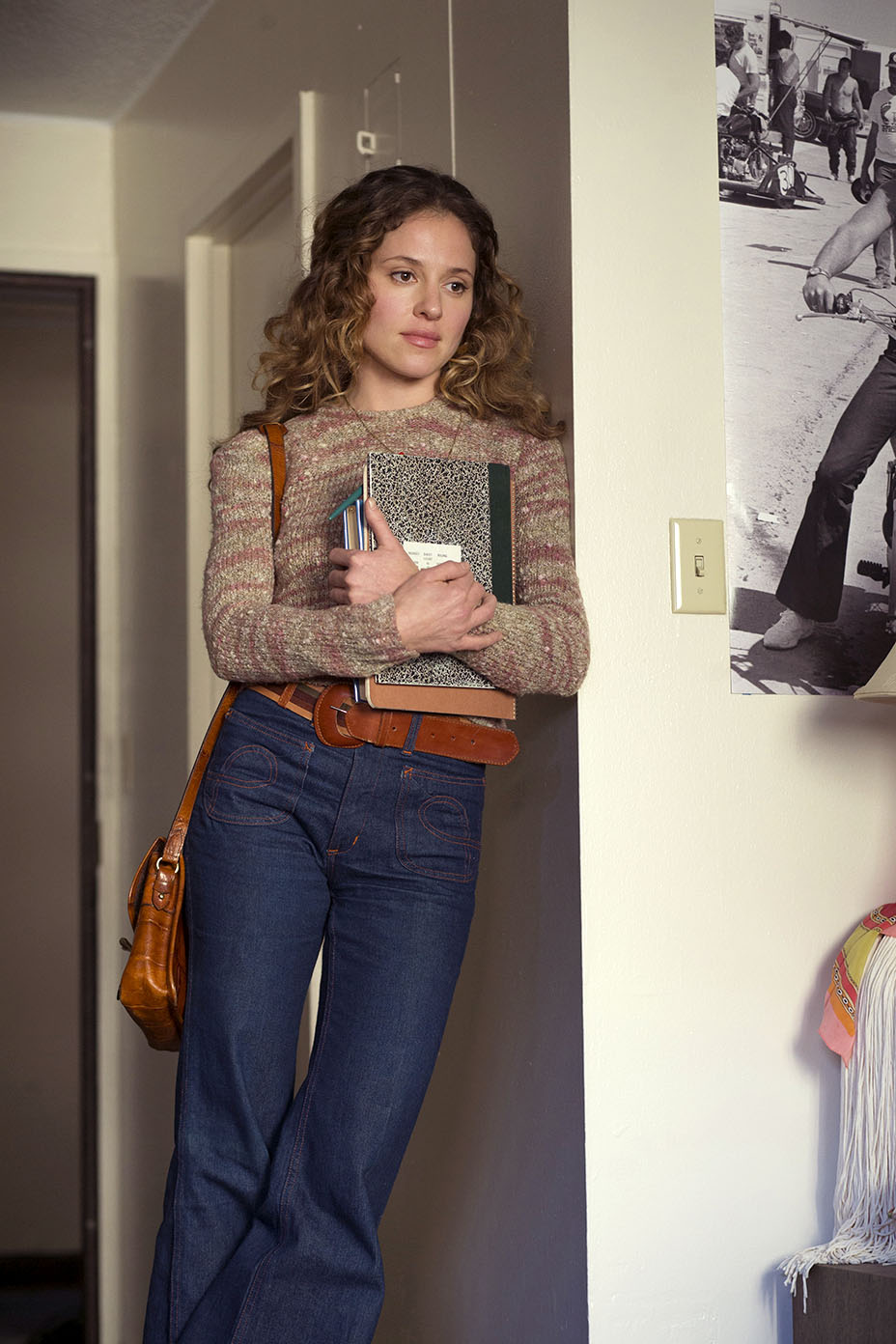 “When [Vinyl] got canceled, HBO didn’t know what to do with the clothes,” said Terraza. The wealth of costumes, she added, was then passed on to her. “They came and they pulled whatever was used [on screen] in Vinyl, and whatever was left, they gave it to us.” The pieces that Terraza’s team pulled however, were mostly jeans and tees; even though both shows are period pieces, they are set “in two very different times in the 1970s,” she added. “Vinyl was glam, so there was stuff we couldn’t use because it was full of sequins and very bright colors. We used more of the street clothes for background actors.”

Compared to Vinyl, The Deuce‘s costumes are much more muted in terms of color and texture, and have a grit to them, given the nature of the characters’ work. For example, a coat worn by Gyllenhaal, who plays aspirational filmmaker Eileen by day and prostitute Candy by night, was torn, dirtied and burned with cigarettes. 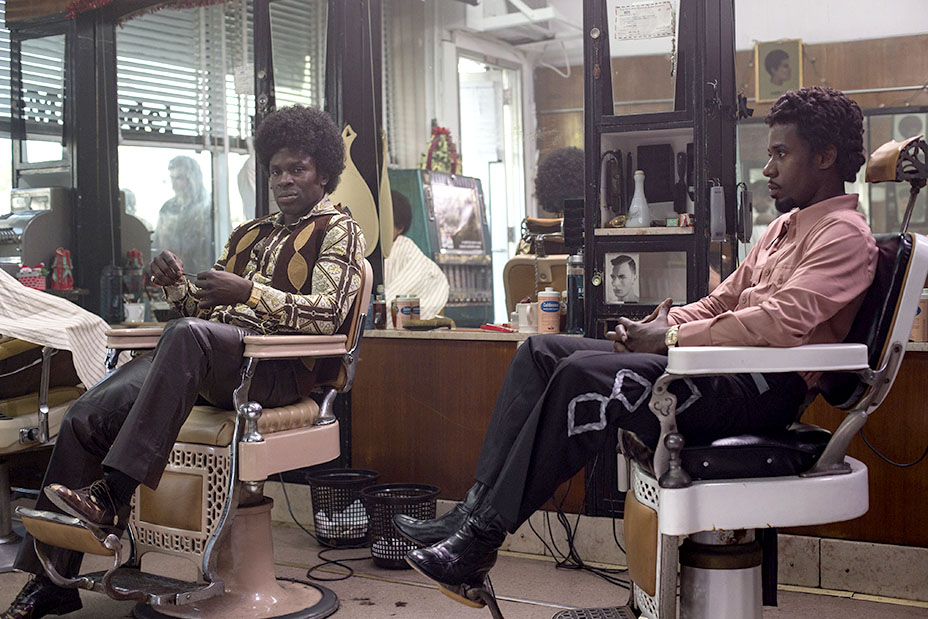 Even the pimps, who try to project their power through flashy designs and flourishes like canes and chunky jewelry, often repeatedly wore specific pieces to emphasize that perhaps they weren’t as well off as they would have liked to appear. Terraza recalls Gentlemen of Leisure: A Year in the Life of a Pimp as the “bible” from which they drew inspiration for everything from hairstyles to cars.

Perhaps the most impressive feat of the costume department, however, was the creation of two distinct wardrobes for Franco’s twin brother characters, Frankie and Vincent — both of whom feel like distinct personalities despite their shared face. (Franco’s impressive acting chops help too.) 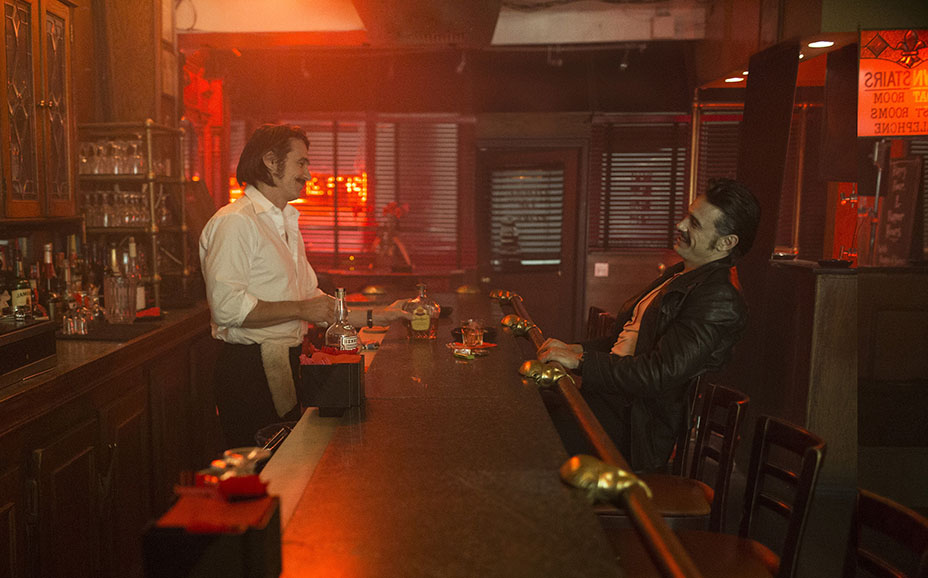 “Vincent is more a family man that works 24 hours, so he’s more easy relaxed — a true 1970s bartender,” said Terraza. “And then Frankie is a sassy guy, so he wears more black and things that are tighter.”

She adds that their different shoes — Vincent in a boot and Frankie in a Cuban heel — lend to a distinct gait that helps Franco get into character. “The shoe creates a certain way of walking,” said Terraza. “These are really tiny differences, but for each character they made sense.”

The season finale of The Deuce, which was picked up for a second season, airs on HBO on Sunday Oct. 29.