Diahann Carroll, the captivating singer and actress who came from the Bronx to win a Tony Award, receive an Oscar nomination and make television history with her turns on Julia and Dynasty, died Friday. She was 84.

Carroll died at her home in Los Angeles after a long bout with cancer, her daughter, producer-journalist Suzanne Kay, told The Hollywood Reporter.

Carroll was known as a Las Vegas and nightclub performer and for her performances on Broadway and in the Hollywood musicals Carmen Jones and Porgy & Bess when she was approached by an NBC executive to star as Julia Baker, a widowed nurse raising a young son, on the comedy Julia.

She didn’t want to do it. “I really didn’t believe that this was a show that was going to work,” she said in a 1998 chat for the website The Interviews: An Oral History of Television. “I thought it was something that was going to leave someone’s consciousness in a very short period of time. I thought, ‘Let them go elsewhere.’ “

However, when Carroll learned that Hal Kanter, the veteran screenwriter who created the show, thought she was too glamorous for the part, she was determined to change his mind. She altered her hairstyle and mastered the pilot script, quickly convincing him that she was the right woman.

Carroll thus became the first African American female to star in a non-stereotypical role in her own primetime network series. (Several actresses portrayed a maid on ABC’s Beulah in the early 1950s.)

Her character Baker, whose husband had died in Vietnam, worked for a doctor (Lloyd Nolan) at an aerospace company; she was educated and outspoken, and she dated men (including characters played by Fred Williamson, Paul Winfield and Don Marshall) who were successful, too.

“We were saying to the country, ‘We’re going to present a very upper middle-class black woman raising her child, and her major concentration is not going to be about suffering in the ghetto,'” Carroll noted.

“Many people were incensed about that. They felt that [African Americans] didn’t have that many opportunities on television or in film to present our plight as the underdog … they felt the [real-world] suffering was much too acute to be so trivial as to present a middle-class woman who is dealing with the business of being a nurse.

“But we were of the opinion that what we were doing was important, and we never left that point of view … even though some of that criticism of course was valid. We were of a mind that this was a different show. We were allowed to have this show.”

Julia, which premiered in September 1968, finished No. 7 in the ratings in the first of its three seasons, and Carroll received an Emmy nomination and a Golden Globe for her work.

While recuperating after starring on Broadway in Agnes of God, Carroll had found herself digging Dynasty — “Isn’t this the biggest hoot?” she said — and lobbied producer Aaron Spelling for a role on his series.

“They’ve done everything [on the show]. They’ve done incest, homosexuality, murder. I think they’re slowly inching their way toward interracial,” she recalled in a 1984 piece for People magazine. “I want to be wealthy and ruthless … I want to be the first black bitch on television.” 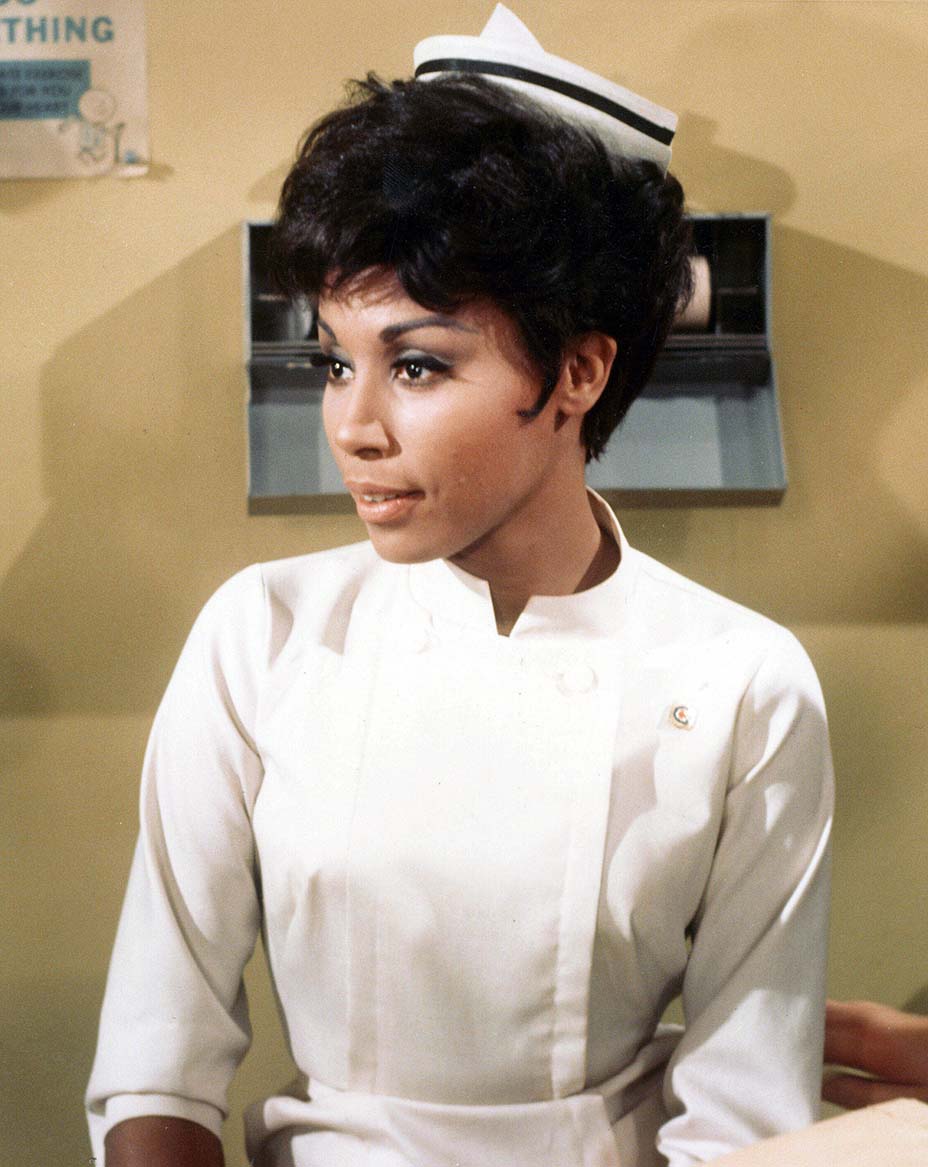 Carroll made perhaps her biggest mark on the big screen with her scrappy title-role performance in Claudine (1974), playing a Harlem woman on welfare who raises six children on her own and falls for a garbage collector (James Earl Jones).

The part was originally given to her dear friend, Diana Sands. But when Sands (who had played Julia Baker’s cousin on several episodes of Julia) was stricken with cancer, she suggested Carroll take her place.

“The producers said, ‘How can she do this role? No one would believe she could do it,'” Carroll said. “I remember the headline in the paper: ‘Would you believe Jackie Onassis as a welfare mother?’ … The very coupling of the name Jackie Onassis and Diahann Carroll is very interesting, if you think about it. Their question was, how do we make anyone believe that she has [six] children? And to be nominated for an Academy Award, to do that, it was the best, the best.”

Carol Diahann Johnson was born in Fordham Hospital in the Bronx on July 17, 1935. Her father, John, was a subway conductor when she was young, and her mother, Mabel, a nurse. She earned admission to the High School of Music & Art, where Billy Dee Williams was a classmate.

At 15, she began to model clothing for black-audience magazines like Ebony, Tan and Jet. Her dad disapproved at first, then began to reconsider when she told him she had earned $600 for a session.

Her parents drove her to Philadelphia on many weekends so she could be a contestant on the TV talent show Teen Club, hosted by bandleader Paul Whiteman. And then she won several times on Arthur Godfrey’s Talent Scouts program, where she first billed herself as Diahann Carroll.

After enrolling at NYU to study psychology, she appeared on the Dennis James-hosted ABC talent show Chance of a Lifetime in 1953 and won for several weeks. One of her rewards was a regular engagement to perform at the famed Latin Quarter nightclub in Manhattan.

Christine Jorgensen taught her how to “carry” herself onstage, Carroll said, and she moved in with her manager, training and rehearsing every day. She soon was singing in the Persian Room at New York’s Plaza Hotel and at other hotspots including Ciro’s, The Mocambo and The Cloister in Hollywood, The Black Orchid in Chicago and L’Olympia in Paris.

Carroll soon dropped out of college to pursue performing full time and was brought to Los Angeles to audition for Otto Preminger’s Carmen Jones (1954), landing the role of Myrt opposite the likes of Harry Belafonte and Dorothy Dandridge.

At the end of 1954, she made her Broadway debut as the young star of the Truman Capote-Harold Arlen musical House of Flowers. Walter Kerr in The New York Herald Tribune called her “a plaintive and extraordinarily appealing ingenue.”

Carroll was cast to play Clara in Preminger and Rouben Mamoulian’s movie adaptation of Porgy and Bess (1959), but her voice was considered too low for her character’s Summertime number, so another singer dubbed for her.

She met Sidney Poitier on that film, thus beginning what she described as a “very turbulent” nine-year romance with him. (Carroll then had her first non-singing movie role, playing a schoolteacher opposite Poitier, Paul Newman and Joanne Woodward in 1961’s Paris Blues).

She would become renowned for her phrasing, partially a result of her studying with Lee Strasberg at the Actors Studio.

In 1963, Carroll earned the first of her four career Emmy noms for portraying a teacher yet again on ABC’s gritty Naked City.

Richard Rodgers spotted her during one of her frequent singing appearances on Jack Paar’s Tonight Show and decided to compose a Broadway musical for her. After scrapping the idea to have her portray an Asian in 1958’s Flower Drum Song, he wrote 1962’s No Strings, a love story revolving around an African American fashion model (Carroll) and a nebbish white novelist (Richard Kiley).

His first effort following the death of longtime collaborator Oscar Hammerstein II, it brought Carroll rave reviews and a Tony Award, the first given to a black woman for best actress in a lead role of a musical.

Soon after hosting a CBS summer replacement variety show in 1976, Carroll retired from show business and moved to Oakland, California. Landing the role of Dominique — the half-sister of John Forsythe’s Blake Carrington — in 1984 put her back on the map in Hollywood.

She told the show’s writers: “The most important thing to remember is write for a white male, and you’ll have the character. Don’t try to write for what you think I am. Write for a white man who wants to be wealthy and powerful. And that’s the way we found Dominique Deveraux.”

More recently, Carroll had recurring roles as Jasmine Guy’s mother on NBC’s A Different World, as Isaiah Washington’s mom on ABC’s Grey’s Anatomy and as a Park Avenue widow on USA’s White Collar. She also appeared in such films as Eve’s Bayou (1997) and on stage as Norma Desmond in a musical version of Sunset Blvd.

She was inducted into the Television Hall of Fame in 2011.

Carroll recorded several albums during her career and wrote the memoirs Diahann, published in 1986, and The Legs Are the Last to Go: Aging, Acting, Marrying, Mothering and Other Things I Learned Along the Way, in 2008.

She was married four times: to Monte Kay, a manager and a casting consultant on House of Flowers; to Freddie Glusman, a Las Vegas clothier (that union lasted just a few weeks); to magazine editor Robert DeLeon (he died in an auto accident in 1977); and to singer Vic Damone (from 1987 until their 1996 divorce). She also had a three-year romance with talk-show host David Frost.

In addition to her daughter, survivors include her grandchildren, August and Sydney.