Diana Rigg, the Emmy- and Tony-winning British actress who vaulted to international fame in the 1960s with her performance as the seductive spy Emma Peel on The Avengers, then gained a new following decades later as the cunning Lady Olenna Tyrell on Game of Thrones, died Thursday. She was 82.

Rigg was diagnosed with cancer in March, according to her daughter Rachael Stirling, who said she had “spent her last months joyfully reflecting on her extraordinary life, full of love, laughter and a deep pride in her profession. I will miss her beyond words.”

“It is with tremendous sadness that we announce that Dame Diana Rigg died peacefully early this morning. She was at home with her family who have asked for privacy at this difficult time,” added her agent Simon Beresford. “Dame Diana was an icon of theatre, film, and television. She was the recipient of BAFTA, Emmy, Tony and Evening Standard Awards for her work on stage and screen. Dame Diana was a much loved and admired member of her profession, a force of nature who loved her work and her fellow actors. She will be greatly missed.”

As the third of four female sidekicks to Patrick Macnee’s dapper John Steed on ITV’s The Avengers, Rigg’s Peel became an icon in England and the U.S. The show centered on the duo — Steed with a bowler hat and umbrella, Peel in cutting-edge mod fashions — working as partners for a secret British intelligence agency in an over-the-top, sometimes surrealist England.

“She was ahead of her time,” Rigg said at a 50-year anniversary tribute to her character hosted by the British Film Institute. “Quite by accident she became this avant-garde woman, and dear God, was I lucky to get the chance to play this woman. For years afterward, people came up to me and said, ‘You were my heroine’ — not me, Emma — ‘and encouraged me to do this and that.’ Without overembellishing her influence, I do think she was a very, very potent influence in women claiming their place in this world.”

At the height of her popularity, Rigg was voted “sexiest-ever TV star” by TV Guide, though she never embraced that. “I have to be honest, it discomfited me because I never saw myself as sexy,” she told the BBC in 2011. “I didn’t see it as a feminist issue, I saw it as, if you like, perhaps I fell short in that aspect because I couldn’t deliver. I did the sexy photographs because it was asked of me, but I never did the ‘sexy’ in person.”

She played Peel for 51 episodes from 1965-68, earning two Emmy nominations, then returned to her roots in the theater for a time. She shared a BAFTA special award for The Avengers with her counterparts Honor Blackman (Cathy Gale), Linda Thorson (Tara King) and Joanna Lumley (Purdey on The New Avengers) in 2011.

Rigg had another chance to work in a zeitgeist-defining series when she joined HBO’s Game of Thrones in 2013 as Lady Olenna, the “Queen of Thorns” known for her mastery of palace intrigue. She was nominated for four Emmys for her work on the show.

“She’s very forceful,” Rigg told The Hollywood Reporter of her character. “She doesn’t mince her words, she’s witty, which is always fun to play. She doesn’t think too highly of [the men in her family] — men in general, in fact. She thinks the world would be better if it were run by women.”

'Games of Thrones' Stars Natalie Dormer, Diana Rigg on the Strength of the Tyrell Family

Rigg won her Tony in 1994 for playing the title role in Medea, and she was nominated three other times: for Abelard and Heloise and The Misanthrope in 1971 and ’75, respectively, and for her turn as Mrs. Higgins in a 2018 Broadway revival of My Fair Lady.

In 1997, she received her lone Emmy for portraying the antagonistic head housekeeper Mrs. Danvers in a PBS adaptation of Daphne du Maurier’s Rebecca.

Enid Diana Elizabeth Rigg was born on July 20, 1938, in Doncaster, England. Her family lived in Jodhpur, India, where her father served as a manager of the state railroad. She spent her childhood in India until she was 8, when she was sent to boarding school in England.

“India gave me a glorious start to life,” Rigg said in a 2004 biography written by Kathleen Tracy. “It gave me an independence of spirit.” But the transition to dreary England was difficult: “The school didn’t mean to be cruel, but it was. I felt like a fish out of water. I knew nobody. I started from scratch. … With an experience like that, your life changes. You are never reliant on your parents again.”

After a couple of years, Rigg’s parents followed her back to England and transferred her to a different school. It was there that a teacher, Sylvia Greenwood, “realized I loved literature and words and saw that I could speak and — well, act! Not just encouraged me, she cheered me on, brought me out. I began to live.”

Rigg studied at the Royal Academy of Dramatic Art and made made her professional debut in 1957 in New York with a performance in The Caucasian Chalk Circle. She also played in repertory companies while working as a model.

Rigg was accepted as an understudy by the Royal Shakespeare Company in 1959 and soon signed a five-year contract. She left in 1964 for The Avengers, which was also about to air — in color! — in the U.S. on ABC. It was her first commercial TV work, and she had never seen the show.

She effectively took over for Blackman, who had left to take the role of Pussy Galore in the 1964 James Bond film Goldfinger. (Julie Stevens had played Sneed’s partner Venus Smith for six episodes in 1962-63 before Rigg debuted as Emma Peel, a play on “M-Appeal,” a marketing term that meant “men appeal.”)

“She was just so exceptional,” Macnee recalled in 2005. “She lighted on us like a butterfly on a flower.”

“I was very lucky, and also very ignorant, because I had absolutely no idea when I got The Avengers what an impact it would have on my life,” she said in 2011. “I hadn’t seen much television. When I took the job, it was a leap in the dark.” Though she was criticized by colleagues at the Royal Shakespeare Company for the decision, she added, it turned out wonderfully.

After two full seasons, Rigg exited The Avengers — partly because of the demanding production schedule, partly to pursue other projects, she said. “The first thing I did when I stopped doing The Avengers was to go back to the Royal Shakespeare and say, ‘Thank you. Now I can sell tickets,’ which I couldn’t before. And it was my way of acknowledging where I had been nurtured,” she said. 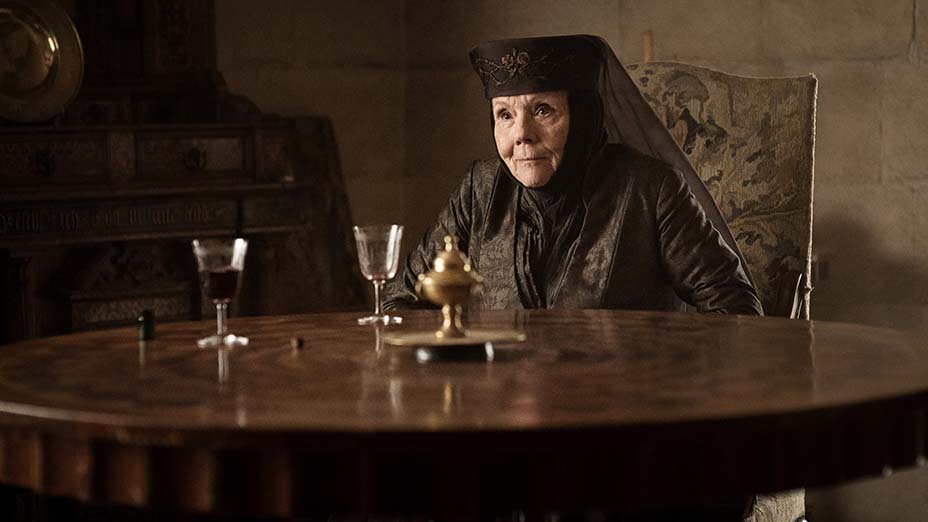 Shortly after leaving, she starred as Helena in a film version of A Midsummer Night’s Dream (1968) alongside Helen Mirren as Hermia, Ian Holm as Puck, Judi Dench as Titania and a number of other Royal Shakespeare Company players.

She landed her first U.S. movie role in the comedy The Assassination Bureau (1969), based on an unfinished Jack London novel set in Edwardian England, and turned heads as James Bond’s beguiling wife in On Her Majesty’s Secret Service (1969).

The 007 movie “was so profligate — money was no object,” she told People magazine in 2017. “There was a 10-second bit where I looked at my watch. And they sent for a watchmaker to arrive with a case full of watches. I just chose one, and they gave it to me. I also had a huge beautiful fox fur coat that I wore in the film, and they gave it to me! I loved it.”

Rigg was nominated for a Golden Globe for best supporting actress for her performance as a nurse in Paddy Chayefsky’s acerbic film comedy The Hospital (1971). She then starred as a department store fashion coordinator who moves to New York after her divorce on the short-lived 1973-74 NBC sitcom Diana, modeled after The Mary Tyler Moore Show.

In 1983 she wrote No Turn Unstoned, a compendium of terrible critics’ reviews from actors, directors and playwrights, inspired by a savage slam of her stage performance in Abelard and Heloise.

In 1994, she was made a Dame Commander of the Order of the British Empire for her contributions to film and theater, and from 1998-2008 served as chancellor of the University of Stirling in Scotland.

Rigg was married in the 1970s to Israeli painter Menachem Gueffen and later to theater producer Archie Stirling, with whom she had a daughter, Rachael. Both marriages ended in divorce.

Rachael Stirling also became an actress (Snow White and the Huntsman), and Rigg played her mom on a 2005 episode of Doctor Who and again from 2015-17 on six episodes of Acorn’s Detectorists.

“We just kept laughing,” Rigg said of performing with her daughter. “I do have to say, people get serious about the job. And it is serious, it’s very, very serious because it’s a communion between you, the audience, and us, the actors — but at the same time one of my real needs is to have fun and to laugh and to enjoy it.”