Has any modern icon ever been as famous as Princess Diana? More than 20 years after her death, much of the world is still fascinated by her — and by every move of her sons, their wives and their children — a fact surely not lost on the producers of Diana, a new musical which wraps up its tryout run at La Jolla Playhouse in San Diego this weekend, with an eye to Broadway in its future.

But to even consider taking a populist musical to New York these days without a tourist-ready jukebox of classic hits means producers must at a minimum start with a known quantity. This true-life tale of a beautiful princess who loved a man who didn’t love her back more than fits that bill.

Upon the universal themes of love, rejection, adultery and Star-Is-Born fame, Joe DiPietro (book & lyrics) and David Bryan (music & lyrics) strike a tuneful, breezy tone that humanizes The Royals — just not too deeply. After all, it’s a musical — an American musical at that — and one that’s haunted by a tragic ending everyone knows is coming.

As the leads, Roe Hartrampf as Prince Charles is way too dashing (downright good-looking actually), while English actress Jeanna de Waal (seen on Broadway in American Idiot and Kinky Boots) is not quite physically tall enough to fill Diana’s regal heels. Yet both pull it off. She’s got the princess’s appealing manner and coquettish head-tilts down pat, while he plays a perfectly detached patriarchal ass, shoehorned into a life he never wanted with a woman he barely knows simply because she “fit the part.”

Diana is not completely blameless, either. In an early scene flashing back to childhood, she fantasizes about marrying a prince and living in a castle. “But not Prince Andrew!” For Diana, only the main prince will do. 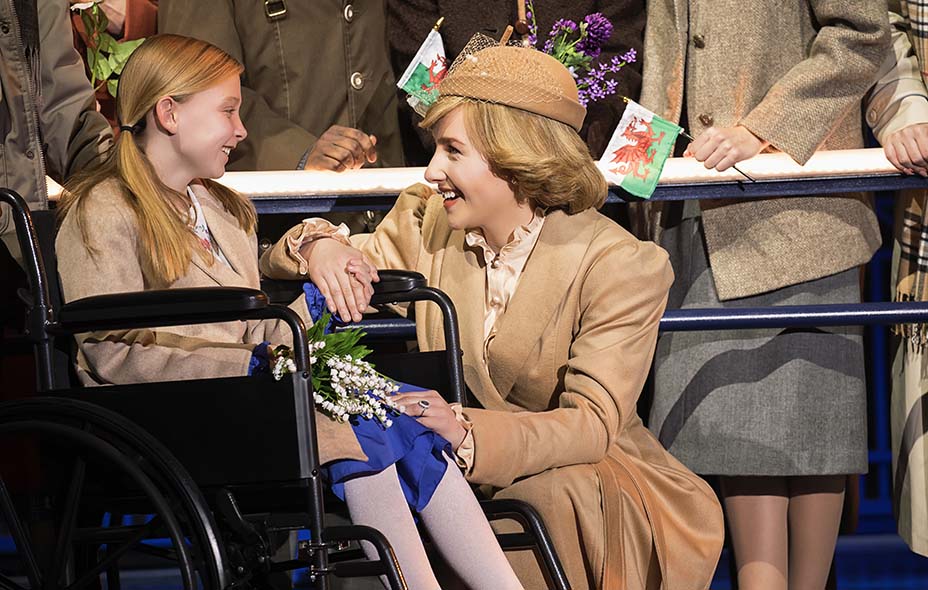 When, as a 19-year-old, she encounters Charles at a gathering, the die is already cast for doom. She bends the rules by approaching him first, asking if he remembers her (three years earlier he had dated her older sister); she acts way too interested, and soon after makes a series of cringeworthy phone calls to him — never a recipe for romantic bliss. When her superstardom eclipses his almost immediately, his emasculation is complete.

Yes, it was all askew from the start — a point made clear by David Zinn’s tilting palace set with its doors, walls and swinging gates sitting just enough off-center to let us know (after a closer look) that things are seriously out-of-whack in the House of Windsor.

Amid this skewed but sweeping grandeur, it’s taken for granted that one marries for show and keeps “friends” on the side. Charles’ friend, of course, is Camilla Parker Bowles, the “inappropriate” mistress we know eventually became his wife — due in no small part to the royal conventions shattered by Diana’s hand.

Given the endless stream of books, movies, documentaries and news coverage over the decades, the world certainly didn’t need a Diana musical, and with so much potential for a camp misfire, it might have been safer just to pass on this idea. But while the Royals themselves may be aghast at the thought of actors portraying them half-naked in bed on a stage, the British public would probably eat it up.

Despite its flaws — and there are many that need to be worked out before this show goes any further — there is an earnestness about Diana. In the able hands of La Jolla artistic director Christopher Ashley (a 2017 Tony Award winner for Come From Away), we are reminded of the subject’s plight and her humanitarian work in a way that seems historically necessary.

She was among very few public figures during the 1980s willing to confront the AIDS crisis and other global atrocities. A scene in which she visits a medical ward, connecting with patients cast out by society, is gripping. And it’s here again where Zinn’s stark scenic work conveys the unspoken horror.

Alas, costumes by distinguished Broadway veteran William Ivey Long are not so successful. While he nails Diana’s transformation from shy teen to global fashion star and produces a few gasps with her iconic wedding gown — the rest of the show’s look needs a revamp. Dressing packs of paparazzi in long trench coats is a visual cliche, and for most of the show the townspeople of the ensemble look to have been plucked from an unrelated 1940s movie. Meanwhile, they bop along to Kelly Devine’s frenetic choreography, little of it advancing the story or saying anything about the times. 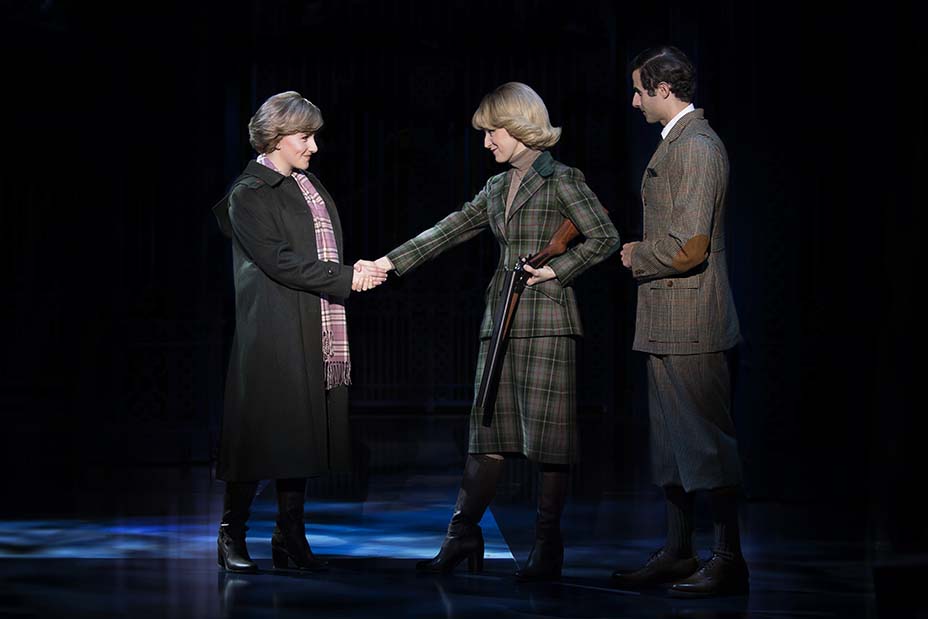 On the other hand, Bryan and DiPietro, 2010 Tony winners for Memphis, have written a melodic near-sung-through score, complete with zingers that land and at least a few tunes — “Him & Her (& Him & Her),” “Perfect Princess,” “Happiness” and “The Dress” — that could stick.

How two guys from New Jersey — Bryan is the keyboardist for Rock and Roll Hall of Famers Bon Jovi — got mixed up in all this is anybody’s guess. At times throughout this show I found myself mentally reworking their Diana tunes into arena power ballads, complete with swaying cigarette lighters. But isn’t that exactly the kind of music Diana herself liked? Just because these composers are unlikely candidates for the gig and they at times rely on styles of melody and song structure that are out of fashion today doesn’t mean their work should be dismissed.

As Bowles, Holly Ann Butler (stepping in for Erin Davie at the performance reviewed) is a treat and a terrific vocalist, too — as are all the castmembers, really. When it all wraps up in a blaze of blinding flashbulbs aimed directly at the audience, the moment illustrates Diana’s life sentence as hunted prey more vividly than any news coverage ever has.

The show, which has twice been extended and will go back into workshop mode after concluding its La Jolla run, seems to have many of the pieces needed for a hit. Given the enduring place in popular culture of the subject, the creative talent involved and La Jolla’s long track record of sending smashes to New York — Jersey Boys, Tommy and Come From Away, to name a few — I wouldn’t bet against it.