The rap star turned Yeezy fashion mogul has been on a Twitter tear, pledging his support on the social media platform for President Donald Trump, something that has gotten many brands in hot water in a time when consumers vote with their dollars.

“You don’t have to agree with trump but the mob can’t make me not love him,” wrote West, who made a pilgrimage to Trump Tower in December 2016 that raised eyebrows. On Wednesday, he also posted a photo of a signed Make America Great Again hat, and Trump tweeted back at him in approval.

Fashion and branding experts say that West’s very public support of a divisive leader is a risky move for a designer with a young company, even one as popular as West.

“Kanye has lit the torch of war with the African-American community and liberal community and it’s going to be a hail of fire,” says Eric Schiffer, chairman of crisis management firm Reputation Management Consultants.

“People like him for being a bit crazy and erratic,” says Stacy Jones of entertainment branding firm Hollywood Branded. “His fans forgive him for being dehydrated, leaving a show for Kim or canceling a tour for his health. But… sharing his enthusiasm and love of our president, when much of his fan base does not at this point in time, that could indeed hurt his brand.”

In October, the #GrabYourWallet movement  was created to encourage shoppers to boycott Ivanka Trump’s namesake label as well as retailers that carry Trump products or endorsed the president. The political pressure may have led Nordstrom to drop the first daughter’s brand, though the retailer says it was actually poor sales.

On Wednesday, Adidas, which backs Yeezy, had no statement about West’s tweets, and a representative for the athletic brand told THR it does not break down sales figures for specific parts of the business. No retailers have come forward to drop the Yeezy brand, either, which is different from the #GrabYourWallet movement in that it doesn’t benefit the Trump family, certainly. And some fans actually seemed excited that the controversy might drive down the prices of Yeezy sneakers, which sell for many more times their retail price on resale sites.

The Trump tweets came less than a day after West parted ways with his manager of nearly three years, Scooter Braun, with no explanation. In November 2016, West had to cancel the remainder of his Saint Pablo tour for personal reasons, which some outlets reported included a nervous breakdown that had him hospitalized.

Friends and family insist West is healthy now, despite the manic nature of his social media postings. And the artist appears to be ramping up to a very busy summer, with plans for a long-awaited album; a collaborative effort with Kid Cudi; production on a new Nas album; and albums from Pusha T (May 25) and Teyana Taylor (June 22), both of which he’s producing. 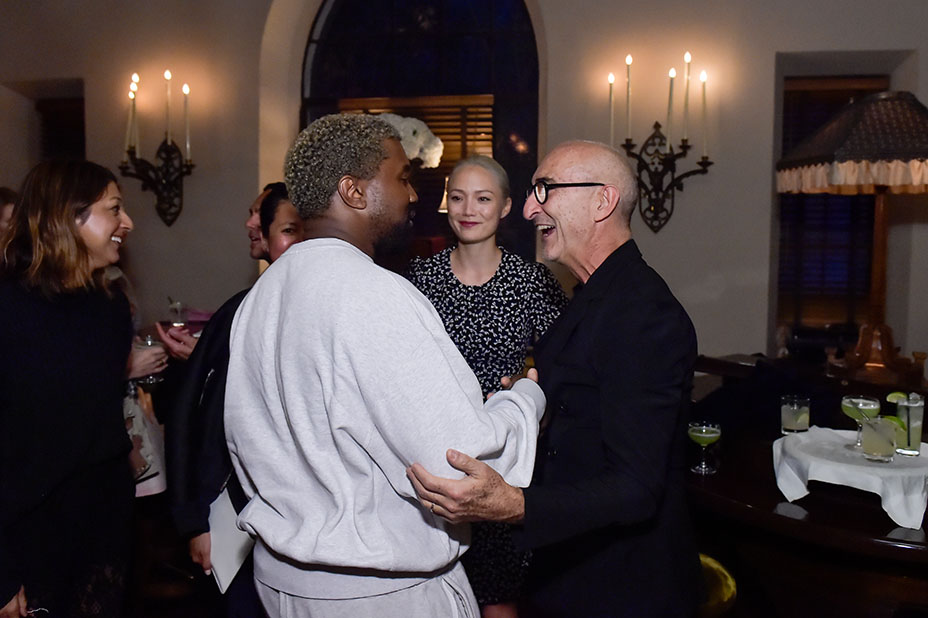 On Tuesday night at the Chateau Marmont, West joined a cocktail party in the lobby for French shoe designer Pierre Hardy. Speaking IRL much in the same way that he’s been tweeting, he held forth on everything from his next business focus — technology — to whom he deems the most important living designer working today, Nicolas Ghesquiere of Louis Vuitton.

He also dropped a couple of other tidbits, “I’m the greatest living artist. There’s Michelangelo, Picasso and me,” he told a magazine editor, asking if she believed in past lives. “I do,” she responded, asking West if he had read the book Many Lives, Many Masters about past life therapy. He laughed, “I don’t read.”

After months of social media silence, West has ramped up his posts since rejoining Twitter earlier this month, tweeting out a series of pop culture philosophy musings, as well as future plans for his Calabasas-based Yeezy fashion brand, produced in collaboration with Adidas since 2015: “Yeezy will become the biggest apparel company in human history by working the most genius level talents and creating product at an affordable price. I hired the head of supply chain from the Gap,” and “Yeezy 350s sell 400 thousand pair in four hours. Only thing close to this is the iPhone,” and “We have 160 positions to fill by the end of the year. Yeezy will hit a billion dollars this year. It is the 2nd fastest growing company in history. It is a unicorn on its way to becoming a decacorn.”

The posts landed his name in the top Twitter trends on Wednesday, and despite his political opinions, West hasn’t lost followers on the social media platform, but rather gained 100,000, for a total of 27.9 million.

Wife Kim Kardashian West felt the need to intervene in Kanye’s stream-of-consciousness sharing, defending him on her own Twitter account. Chance the Rapper also tweeted that West is “in a great space.”

Now when he spoke out about Trump… Most people (including myself) have very different feelings & opinions about this. But this is HIS opinion. I believe in people being able to have their own opinions,even if really different from mine
He never said he agrees with his politics

“Kim is under fire, too,” says Schiffer, the crisis manager. “She’s made overtures she doesn’t agree with him, but does appreciate his free-thinking. And so many couples fall into this same model in America, where the wife is vehemently against Trump and the husband is for him. I think fans will give her a pass. But for Kanye and his brand, it will affect sales among liberal elites. But conversely you may suddenly have conservatives looking at all of his products in a positive light. He opens a new base that will be interesting to see.”

According to online retailer Lyst and Business of Fashion‘s Hot Brand Index, taking into account  “search, page views (across devices), engagement, intent rate and conversion,” Gucci and Yeezy are the two hottest brands in the luxury space. West’s sneaker styles routinely sell out within hours of dropping, and spawn waiting lists that once used to be reserved for Hermes Birkin bags.

Despite Yeezy’s popularity, West has had a tempestuous relationship with the fashion industry.

Even before teaming up with Adidas, he was a regular in fashion show front rows, and in 2008 debuted his first-ever piece of clothing, a hoodie with a sharkfin hood, while attending the Dior Homme show in Paris, where he was more of a curiosity at the time. He modeled other pieces from the line, called Pastelle, in music videos, on TV and in the pages of VMan magazine, but that’s as far as the collection got.

Then in 2011, after interning at Fendi and befriending fashion heavyweight Tory Burch, he debuted his first full fashion collection at Paris Fashion Week to a front row packed with stars Jared Leto and Lindsay Lohan, and designers Azzedine Alaia, DSquared2’s Dean and Dan Caten, Olivier Theyskens, Jeremy Scott and the Olsen twins. Reviews were tepid.

His Yeezy collections didn’t fare much better with the legacy fashion press, even as he democratized the runway experience. His Season 1 debut during New York Fashion Week in February 2015 brought the world nude bodysuits, hoodies and a diverse runway cast, with Beyonce, Jay-Z and Rihanna in the front row.

In 2016, West showed Yeezy Season 3 in tandem with the release of his album The Life of Pablo, during an open-to-the-public, ticketed event at Madison Square Garden that was live-streamed on Tidal. 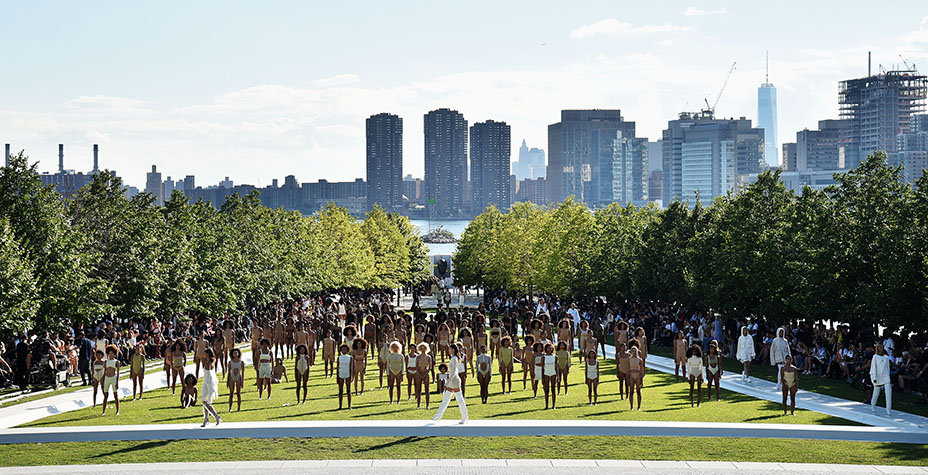 Editors skewered his Yeezy Season 4 fashion show held at Roosevelt Island’s Four Freedoms Park, after it was delayed for hours, and models began to faint in the heat. The season after, many members of the press swore off attending any more presentations of his collection, but as it turned out, the show was low-key and professional, and also featured IMG’s first hijab-wearing model, Halima Aden, in her first runway show.

What will Yeezy hold for Season 8? Will there be a Season 8?

“I think this will die down,” says Jones, noting that the power of West’s celebrity, like Donald Trump’s, ironically, makes him impervious to almost anything. “We’ve never seen the level of celebrity we’re seeing today with generations brought up on social media. Craziness and wackiness doesn’t seem to upset people because it’s almost like it’s a family member.”

Still, she concedes that it does seem like West could be having some sort of personal crisis: “I’m just waiting for the Kumbaya moment where they admit he has a problem, and everyone says, ‘Let’s talk about mental health.’”

Kanye West Doubles Down on Trump Support: "He Is My Brother"