Following a meat-free premiere in New York, Tilda Swinton and other Hollywood castmembers of Bong Joon Ho’s much-talked about Netflix film Okja arrived in Seoul this week for the Asian premiere and press junket. The latter media event on Wednesday opened with the filmmaker addressing how South Korean distributors are opposing the simultaneous release of the Cannes Film Festival competition piece in local theaters and on the online streaming giant on June 28 (June 29 in South Korean time).

“I apologize for driving around this controversy wherever I go,” Bong told reporters on Wednesday. “It was odd for me that the Cannes Film Festival is an international event, but we had to take French local rules into consideration. Lars von Trier wasn’t there [at the festival] this year, so in a way, we seem to have contributed noise instead,” he said laughing.

“I understand South Korean multiplexes and their wish for the three-week hold back time. On the other hand, I would also like to respect Netflix wanting to push forth its policy of simultaneous release. The film is, after all, financed by Netflix users, and I don’t think we should deprive them of their privileges [to watch the film at the earliest possible date].”

Finally, he emphasized that the controversy stems from his “cinematic greed.” The $50-million film backed by Netflix and Brad Pitt’s Plan B will also receive limited day-and-date releases in select U.S. and U.K. theaters.

“I sincerely apologize to all [industry people] whom I have unintentionally tired out. I don’t think Netflix normally pushes local exhibitors to simultaneously open their films. I think the problem is that the film arrived before local industries set their rules on this. It all stems from my cinematic greed. I really wanted this movie to play on both Netflix’s high-quality streaming and the big screen.”

Ahead of the press meeting, the South Korean press screening for Okja on Monday and VIP premiere on Tuesday caused quite a stir for their “odd” venue choice. Both screenings were held at Daehan Cinema, a historic theater dating back to 1955 that stands in Chungmuro (the symbolic heartland of the Asian country’s film industry that is the local equivalent to Hollywood) but no mainstream film, however — let alone the priciest Korean-language film to date — has bowed at the 11-screen venue since the late-2000s when glossy multiplex cinema brands began dominating the scene. 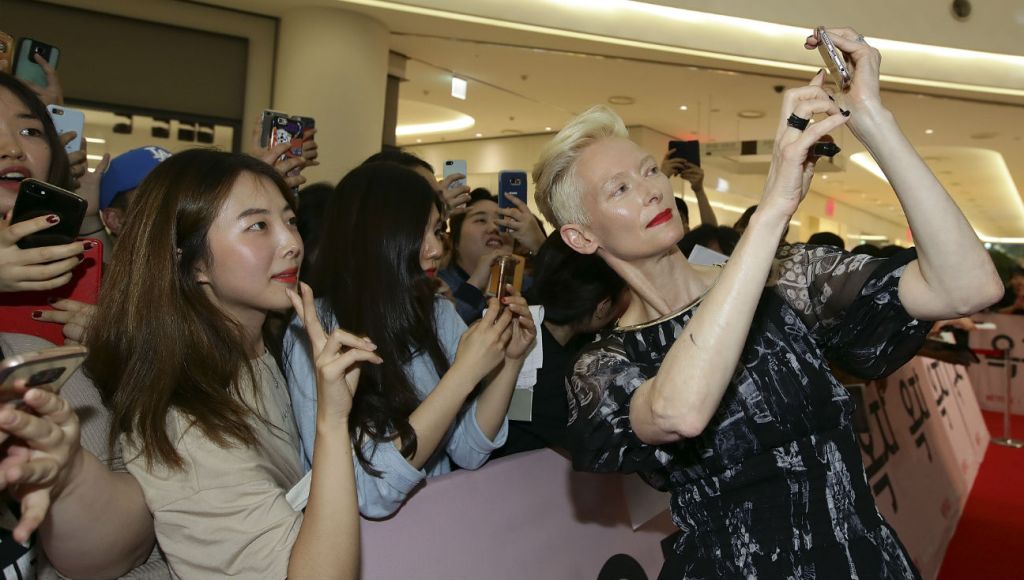 Next Entertainment World (NEW), the South Korean distributor of the much-anticipated Netflix film, has touted the rather atypical screening venue choice as “a gesture of respect” to South Korea’s cinema roots. Local industry people have, however, noted “how strange and inconvenient it was” that the film’s VIP screening was held at Daehan, located quite some distance from Yeongdeungpo Times Square, where the red carpet event for local fans took place. Moreover, many believe that it is a reflection of how the country’s major exhibitors have expressed their adamant refusal to screen Okja film should it push ahead Netflix’s policy of simultaneous streaming.

On June 2, the country’s largest exhibitor, CJ CGV, which dominates about 30-40 percent of screens nationwide and 40-50 percent of admissions according the company data (South Korea measures box-office performance by admissions), has sent NEW an official letter saying “it will be difficult for CGV to screen Okja in case it is simultaneously streamed on Netflix,” a spokesperson for CGV confirmed for The Hollywood Reporter.

“We have not officially heard back from NEW. But the release date isn’t until June 29, and we are hoping to find a way to screen Okja in CGV cinemas. However, if NEW decides to push ahead the simultaneous release plans, then it will be difficult for us to make a compromise,” said the spokesperson who spoke on conditions of anonymity, explaining that “final decisions have yet to be made so we feel careful” as reasons.

In South Korea, theatrical release plans and number of screens have traditionally been decided about two weeks ahead of a given film’s opening date. A film’s box-office life largely depends on its first-week score, and it then debuts on IPTV about two to three weeks after the initial big screen debut. The poorer its performance, the faster it moves onto the internet platform. 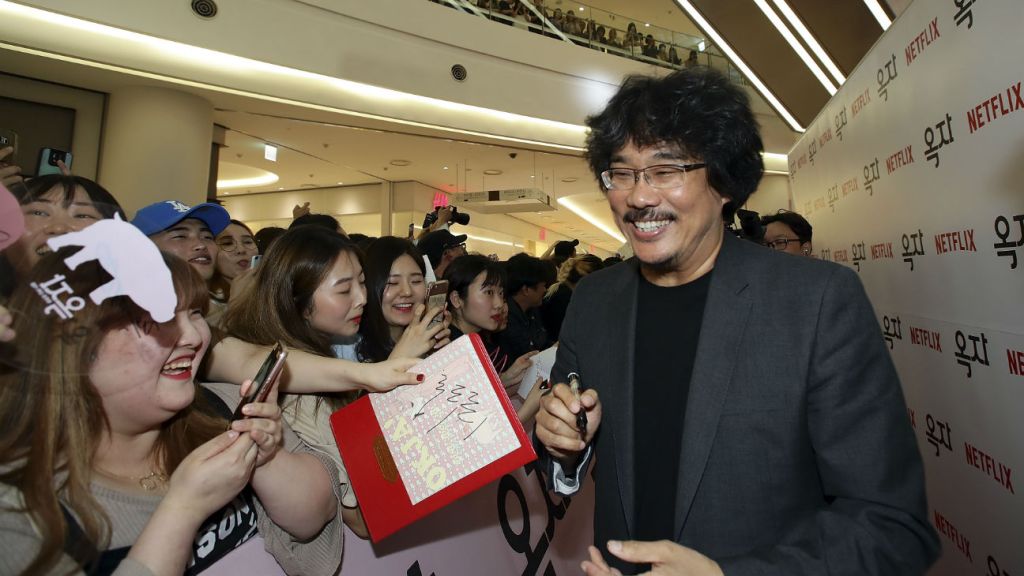 “It is important for CGV to offer moviegoers good movies, but it is also important for everyone in the South Korean film industry to think carefully about these issues. Cinema and the value of movies must be at the center of the discourse, but we regret that it seems Netflix is insisting on things in a one-way manner without really taking into consideration local industry convention or practices,” said the spokesperson.

“We understand that exhibitors may not screen Okja due to concerns over the hold-back time,” said a spokesperson for NEW. “But it is too early to say that major exhibitors are refusing to screen Okja, and we are trying our very best to secure theaters.”

Meanwhile, regarding the press screening venue choice, the NEW spokesperson said that the more standard multiplex theaters (such as Lotte Cinema-Konkuk University, where NEW’s other Cannes title The Villainess was revealed to the press two weeks ago) were simply unavailable. “Some of the multiplexes were already booked for other events and screenings on the dates that were slated for the press and VIP screenings, which we had set according to the schedule of the actors,” said the spokesperson.

1st Look, the local PR agency promoting Okja, told THR that it has “not faced particular difficulties” while handling the title. “There could easily be debates or controversies surrounding any given film, and the current discourse has not complicated things for us in any way,” said Kang Hyo-mi of 1st Look.

Written by Bong and Jon Ronson (Frank), the Cannes title follows Mija, a young girl who risks everything to prevent a powerful, multinational company from kidnapping her best friend, the massive, titular animal named Okja. Young South Korean actress Seohyun An plays the lead role opposite Tilda Swinton, who features as the CEO of Mirando Corporation, a bio food corporation that wishes to capture Okja for its top secret “super pig project.” In addition to the company, other sources of “obstacles” in what Bong says is “essentially a love story” between Mija and Okja include a zealous zoologist (played by Jake Gyllenhaal) and an animal rights organization with ulterior motives.

Steven Yeun and Daniel Henshall feature as members of the group while Giancarlo Esposito plays the close aide of Swinton’s CEO character Mirando, and Byun Hee-bong, the veteran South Korean actor who has collaborated with Bong several times including The Host, appears as An’s grandfather.

In the meantime, Bong said he does not intend to preach vegetarianism through his film.

“Away from the gaze of others I do continue to eat chicken and beef,” he said, evoking laughter from reporters. He said he practiced veganism for about two months while preparing for the film and has since given up pork.

“While working on the script in early 2015, I visited a slaughterhouse in Colorado, which the proprietors proudly call ‘beef plant’ where over 5,000 cows are slaughtered per day. The scale, size and cruelty I witnessed there were about 20-30 times that of what you see in the film. Okja relatively tones it down,” he said. “And as I left, the smell, which you can’t smell through the film, lingered on all the way at the parking lot located about 100 meters away. The stench of the blood, bones and defecation, it felt like they stained my clothes and followed me all the way back to New York … But when I came back to Seoul, and had all these dinner meetings, I started eating meat again.”

The filmmaker said that he doesn’t particularly object meat consumption itself. “Humans as well as carnivorous animals have been consuming meat for a long time. But it’s been only several decades in the history of mankind that animals have been part of this massive pipeline in cruel environments, like mass-produced objects. I wish people would be able to reflect on today’s mass production of livestock.”

June 14, 3:24 a.m. Updated with correction on how the press and VIP screening dates were chosen. The article previously stated that it was due to delays involving actors’ schedules. NEW has re-confirmed that it was due to the unavailability of certain venues on the dates that castmembers had been due to visit Seoul.